For my last day at Roy Bridge I decided to tackle these two hills. From reading the guidebooks I expected to spend most of the morning floundering about in the forestry trying to get on to the open hillside.

In the event it was quite easy.

From the gate just east of Roughburn you just walk up the track through the trees. It twists and turns a bit but so long as you stick to the main track and ignore anything else on the left you eventually reach a gate and a stile. From there you turn uphill along a very muddy path between the trees to reach a stile. There is a path leading away from the stile but I lost it after a while (I'm not very good at sticking to paths) but anyway the route is clear enough - straight up the hillside. It is fairly steep and quite rough but I stopped to admire the view behind me quite a lot. 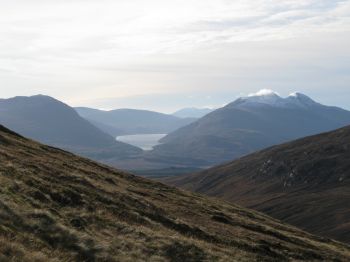 About 2 hours after leaving the car I arrived at the south top. 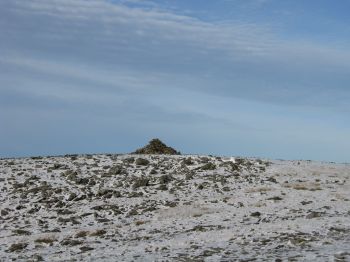 Interestingly the books give the central top precedence but according to my OS map the south top is 1050m and the central one is 1049. Let's not quibble over the odd metre though. It took me a little while to realise that the round, snow covered hill to the north -east was Creag Meagaidh because I had previously approached it via Coire Ardair. 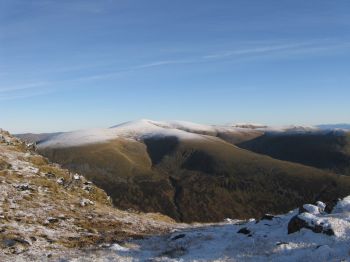 From the south top it was a very pleasant snowy walk across virtually flat ground to the central top with the steep rocks falling away to the right. 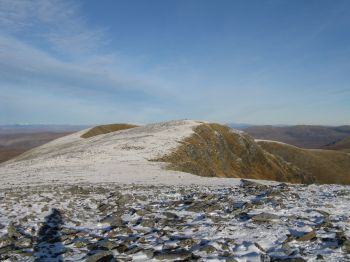 Then, all of a sudden, as I skirted round the corrie to the north top the wind became really strong. I dropped down to the north-west over slippery, snow covered rocks and then heather and grassy slopes to reach the cairn at the bealach between Beinn a'Chaorainn and Beinn Teallach. At this point I decided to wimp out: I really hate walking in strong winds.

So I picked up the path running down beside the Allt a'Chaorainn and made my way back to the road. About half way down I discovered why it was so incredibly muddy and churned up when a vehicle with eight wheels came lurching up the track. Bearing in mind the difficulty which might be encountered in trying to cross the burn near the wood at the bottom I crossed to the east side quite high up and stayed there although it was very boggy. Eventually the ground becomes quite flat and a track runs across to a stile over a fence - although the gate was open so I used that instead. A track then leads into the trees and this joins the main track after about 10 minutes. Turn right there and you are back at the car.