Haven't posted up on here for far too long now! Time to change that!
Was looking at the weather report on MWIS anxiously as the forecast for the west highlands wasn't good and I do like seeing off my peaks! The forecast in the east was better, so we plumped for the Ben Lawers range.
Having already been up Ben Lawers from the visitor centre earlier this year we decided to head round to the Hotel(only because their Guinness is exceptional!)
Starting just past 9 we headed along the road and pasted left at the Antler Home. Some of us were starting happy and others well..had a good night at the Olympic opening ceremony.
I kept asking the question in my head as to whether the clag was going to lift? The walk up to Meall Greigh was a slog to say the least. the path was pretty non existant and even though there were plenty of the natural lawnmowers around(sheep!) the grass was long and pretty hard going...very much like the slog I'm going to do up Ben More soon.
However the weather was starting to favour us and was lifting nicely in the heat with the odd shower blowing across and with it the views down and up Loch Tay were superb! and the view to Ben Lawers magnificent and so clear! At the summit of Meall Greigh we all grabbed an opportunity to catch a breather and for some of us to collaspe(Face of fatigue in Trail I think!) and of course an opportunity for Amber to smash into her stockpile of Jaffa Cakes followed by a bit of Brucie at the peak. The walk over to the second peak of the day was very straight forward with the views opening up all the time especially over to Carngorm and Schiehallion. Meall Garbh was reached in just under an hour from Meall Greigh and the view back to this grassy monster became more apparent. 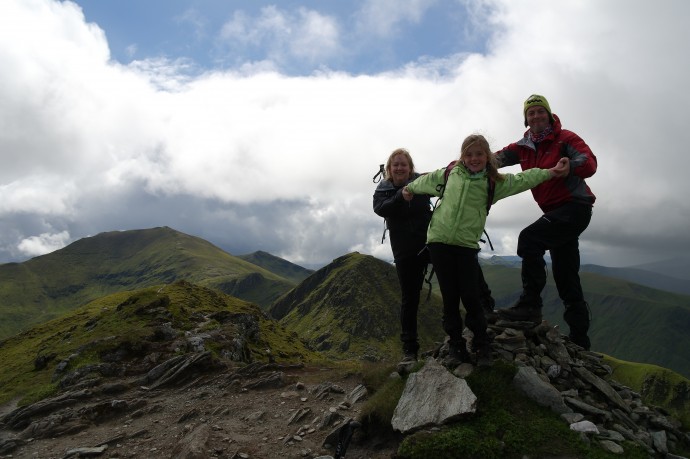 Now the views from Meall Garbh are superb especially over to the 3 rd peak of the day An Stuc and I could have quite easily stayed there longer! We had been lucky with the weather all day and this was about to run out probably at the most crucial point in the walk, with the ascent of An Stuc, and Scotland's four seasons in one day struck. Now you see it! This was going to be the girl's first go at scrambling and to be honest it was perfect as it turned out to be short and to be honest quite easy although there was a lot of loose scree around but nothing in comparison to what I had completed recently (Aonach Eagach, Liathach) The peak was reached quite quickly from Meall Garbh and turned out to my mates Kev 50th Munro! in which a celebrity celebration peak followed. The walk back to to Hotel would involve us dropping down into the bealach behind An Stuc to the Lochan and the initial descent is grassy and pathless and very boggy. The rest of the walk past the lochan had excellent views although wet as the rain finally arrived. The walk on the Meall Garbh Circuit was a fantastic day out that had everything & apart from the intial slog up a day full of variety including an excellaent meal and pint at the Ben Lawers Hotel..Cheers Guys. P.S. this is Amber's 19th Munro completed and wants to do Nevis next! Love the celebrity celebration on the summit - thats the way to bag Munros, none of this planking nonsense!!!