Quite probably a classic Lakes ridge-walk; quite definitely not the best day to showcase it…

ill bell.gpx Open full screen  NB: Walkhighlands is not responsible for the accuracy of gpx files in users posts
Although it’s hard to vouch for the views on a day when virtually all over 500m-odd was in the clouds (and everything else was seen through a haze of rain) at least underfoot and in the foreground this seemed a really nice circuit. The Garburn Road up from Troutbeck is very well-made, retaining plenty of the natural rock to give it more charm than many over-stoned tracks – striding up that, even the very short detour over damp and tussocky-looking slopes to take in Sour Howes and Sallows lost the appeal it seemed to have on the map… 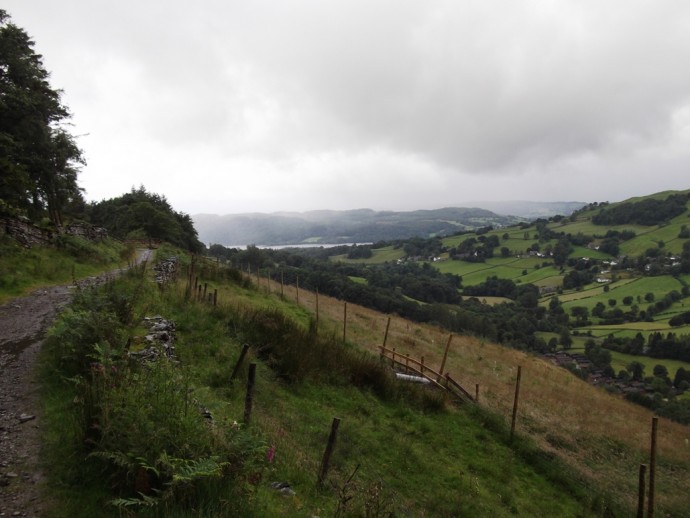 Towards Windermere from the Garburn Road 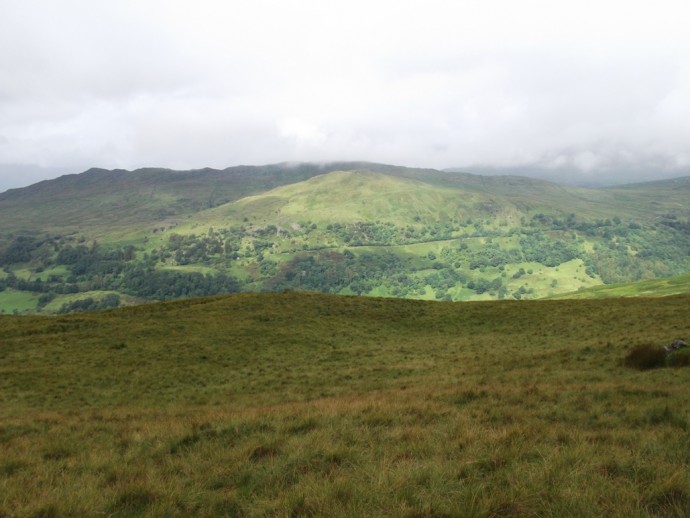 After a little bog-hopping from the col, the rest of the Yoke-Ill Bell-Froswick ridge is walked along one of those comforting ‘improved’ paths (the morass that sits either side in many places makes you very glad of it too!). Some of the drama is inevitably lost in bad weather, but the rocky half-scrambles up and down Ill Bell and the narrowing ridges either side, steeply falling away into misty nothing, give at least a glimpse of the appeal of this route. More of a wet slog up to Thornthwaite Crag and its beacon at the end though, the path suggesting that most veer off east on the Kentmere horseshoe instead. Just occasionally on the higher slopes the clag parted for a moment (even if only to clear a way through for the greater downpour that seemed to always follow...), but it was very welcome in finding the slightly vague and marshy start of the ‘Scots Rake’ descent back to Troutbeck. After that, this is a lovely green path home, dropping gently into the quiet valley as – typically – the hilltops above started to clear. Windermere, and the way down Looks a nice walk with a lovely quiet return route. Typical that the tops cleared once you got down to the valley.

Looks like a really good route - shame about the weather though!! Funny how the weather always seems to clear just as you finish.....murphy's law rides again!

Great report P, shame about the damn weather but it does get you some of those nice 'drifting cloud' photos, I like the 2nd to last pic of the gate and a lane leading away to the distance....looks so inviting