I’ve been up here nearly three months now so it was about time I sampled some of the hills a little closer to home. Instead of heading north I looked south to the Corbetts clustered in Galloway and chose Cairnsmore of Carsphairn. It’s a luxury to be able to make a decision at breakfast based on the view out of the window, get away, and still be back to do some gardening later in the afternoon.

Forty five minutes later I pulled off the A713 at Bridge-end and started off up the farm track past the boisterous dogs and raucous chickens at the cottage. Cloud still clung to the hills in the south west and the mist of an occasional shower still blew through. 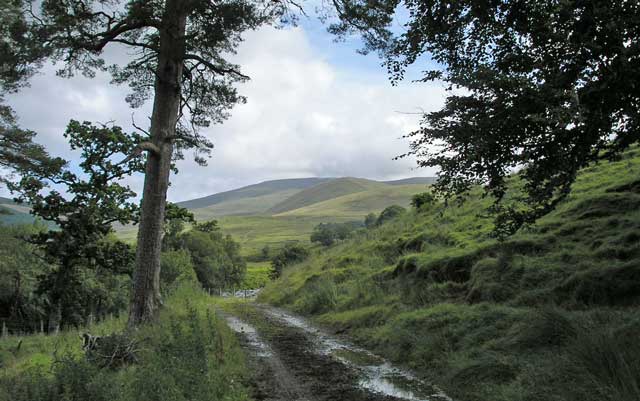 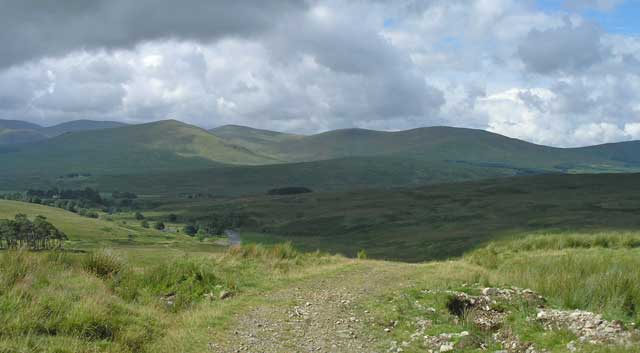 The easy walk-in got some distance into my legs before I started to tackle the steeper stretch to the top. A herd of black cattle gave suspiciously protective glances as I passed their calves amidst the barns before passing onto the open hillside above. I looked forward to encountering an intriguing feature that the map suggested lay ahead. Was the Nick of Disgee and relation to Bunyan’s Slough of Despond? Would it be dark, dank and dismal and represent one of life’s struggles?

Having passed through a brand new steel gate and stepped over the most average of streams I fought back the disappointment of anticlimax. I should have looked more closely at the contours on the map which registered only the slightest variation and the smallest of “V”s.

The track ends abruptly. A stone wall prevented any further progress in a forward direction. However, its line to the right indicated the course to be followed upwards once the Polsue Burn had been crossed a couple of hundred metres ahead. At the burn I took the line of a more broken wall directly upwards, while to the right a dog-leg could have been taken to the right and a more continuous wall was an option. It may have proved to be the drier of the two but I suspected the whole lower slope was going to be fairly damp. But of course what I forgot to do in my rush to get away was check WH – where of course there’s a helpful report that informs clever people of a bridge to the right and the obvious route. One lives and learns. 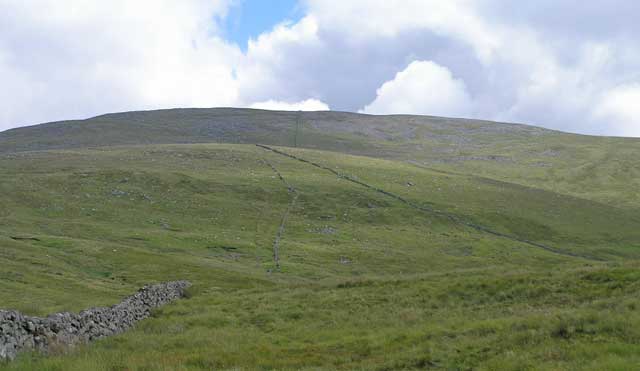 Simply follow the wall - or at least the correct one

Anyway, the path I chose rose and gradually dried and as the gradient relented the ground became stonier before levelling out as the summit cairns and trig point came into view.

The cloud ceiling sat just at the summit allowing views down but not widely beyond. With no sun bursting through there was a chill in the wind so I just enjoyed a quick bite before retreating in the face of the surprise arrival of a swarm of flies.

I headed off across the scattered summit stones to the strangley named Black Shoulder - no gloom, threats or dangers as far as I could see - and began to follow, yet again, a series of fences and walls. I could only make a guess at some of the unfamiliar peaks that were close-by and in the distance. How far could I see? Which were the fells of the Lake District and on a clearer day could I declare “I can see our village from here.” I think the last one was based on unbridled optimism rather than rational thought. 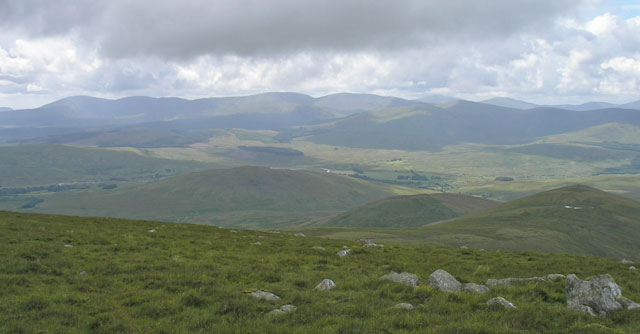 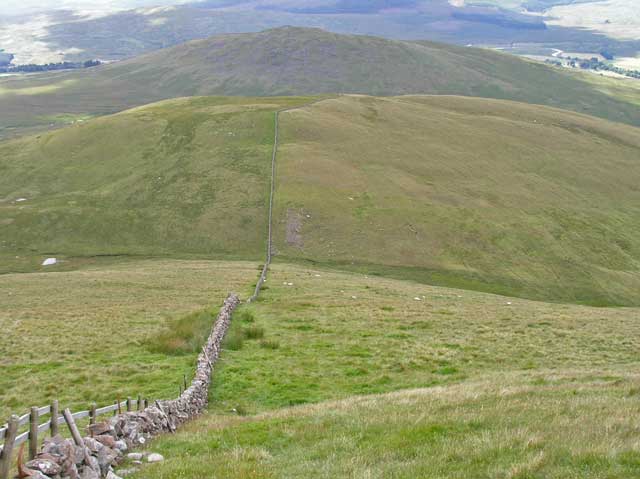 After Dunool the final top of the day beckoned. I wasn’t happy at following the SMC guide’s recommendation. “Leave the wall before the summit ... and descend .” No way. I’d not come this far to miss out on scaling the gloriously titled Willieanna. I persisted with the wall and skipped across it to surmount the gently domed hummock. There’s nothing there to mark its actual summit, just a gentle gradient falling away evenly from a central tussock: an endearingly enjoyable top on which to finish the day.

The precipitous slopes of Willieanna

The final stage of the day was to simply drop down back to the in-bound track and reacquaint myself with the cattle. I was back at the car within three and quarter hours, in contrast to the Cairngorm giants I’d visited the week before. They may have a different scale and character but proved to be no less enjoyable and provided a sample of what can be visited on quick trips close to home. 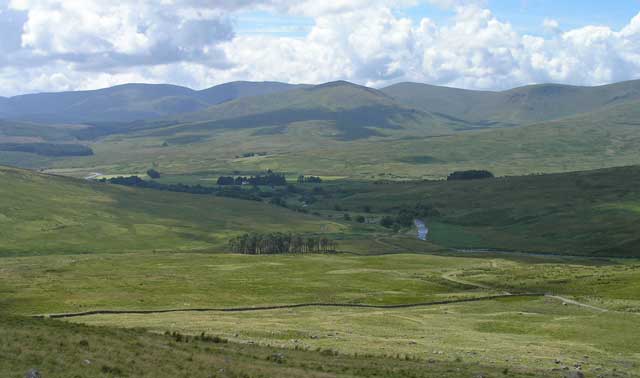 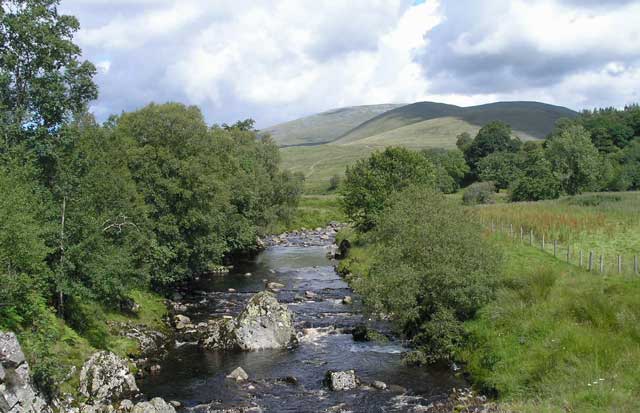 A final look up the Water of Deugh to Cairnsmore

And so to the gardening - now can anyone let me know how to get rid of mares tails - and I don't want to hear the common solution of "move house."

Once I've got rid of the blasted things I'll look forward to more trips in that direction.

Lovely country, thanks for that.

Like yourself I headed south last week and really enjoyed it. A criminally overlooked part of the country on my part.

Many a good hill south of the Highland Boundary Fault

. Not sure I would class getting back "to do some gardening" as a luxury - cruel and unusual punishment perhaps

That walk is just up the road from me! Still to conquer it! There are so many great walks in d&g. Beautiful landscape. Loads that i havn't done yet.

Nice to read a new report from D&G. There's some fantastic walking in the area for you in the coming months.