A trip up Crinkle Crags with Dave F...
The weather report for today was good for the morning and in the afternoon, wind and rain was due to roll in and would stay for the remainder of the day!

We started at the Old Dungeon Ghyll Pub and headed out towards The Band. From here we headed along the path to Stool end Farm and then hugged the foot of the Band around Oxendale beck before we reached Whorneyside Force... 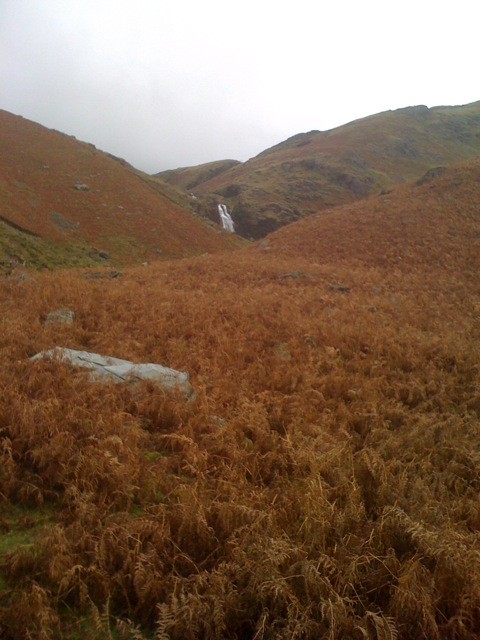 Our first glimpse of Whorneyside Force 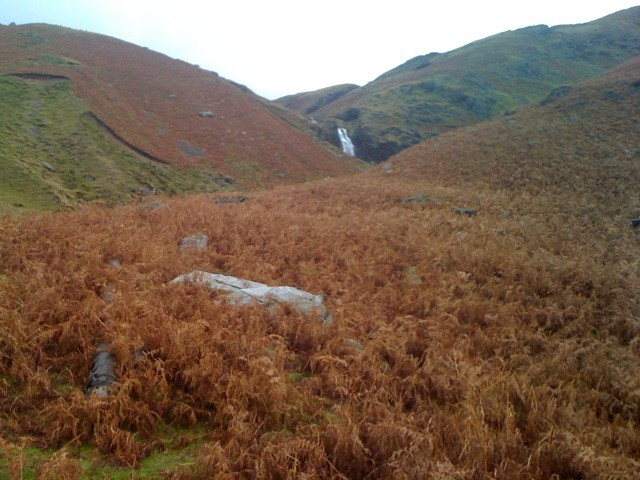 Whorneyside Force in it's full glory! With Dave adding some scale 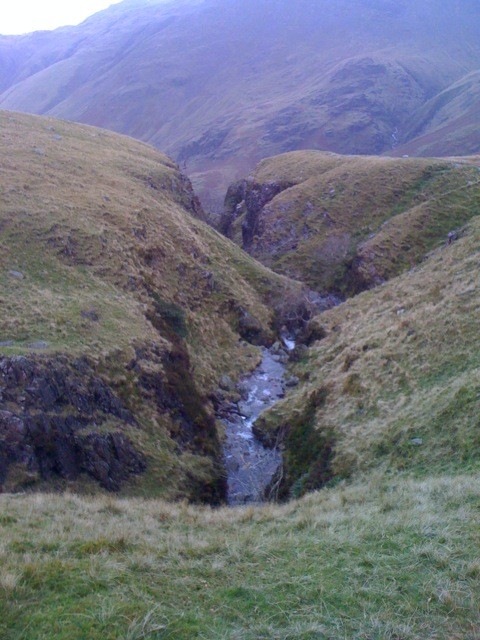 The top of Hell Gill from Buscoe Sike Pike O' Blisco brieflly illuminated during a break in the clouds! The Langdale Pikes pop out of the cloud for a minute! Dave making a final push for 3 Tarns where we stopped briefly for a bite to eat. Sadly there was no view across to the scafell massif or up to Bowfell from the tarns. :( Dave at the top! (in cloud) And me at the top (in cloud)

Unfortunately by this time the weather had set in and photos were both pointless and I didn't want to get the camera wet! We went down the Bad Step which was interesting going down and we ended up jumping down!!

We headed down to Oxendale beck from Red Tarn and via Browney Gill. Almost at the bottom and Dave did the inevitable - 5 points of contact!!

A fantastic Day topped off with a half of the finest local ale!
Shame it was so wet.

We had even worse weather for the Hell Gill/Whorneyside Force route - the only pics I got were below. I may write up a Crinkles report myself soon... Took me ages to work up to doing the Bad Step and, surprisingly for me, I went down it before I went up it. I found it so much fun I went back up and down it again right away. But for ages before that I'd gone round the other route. I managed to find enough hand and foot holds but then I'm 6 foot tall and have long legs so that helped. You were quite brave doing the Crinks in the mist as they can be quite hard to navigate... I'll just put my Whorneyside Force photo on to show how much less water we had and my Hell Gill photo so you can see how low our mist was - we never saw another thing all the way up to Bowfell... love your photo from just above Hell Gill looking back! Thanks! I love the pic too but it just doesn't do the real thing justice! Brave - maybe, some would say foolhardy! I would tend to agree as we did encounter some navigation issues! Not sure how cos we checked our compass bearing against the map every 4-5 mins, but at one point ended up on a northerly heading! Confused we checked again and thought maybe the compass had broken but realised quickly that the path had turned us through 180 degrees! Still a great day out!

You are very brave to go up there in those conditions, we did it last year on a windless warm day and it was hard work then, will put it online in the near future, thanks for the report, Sue

Unlucky weather for you. I did Crinkle Crags in glorious sunshine and a great walk it is too (via Pike o Blisco).
I suffered similar confusion to you when heading for Gable earlier on in the year. I hit fog approaching Brandreth, once there my body's "compass" made be think i was heading North away from Gable, Had I not had an actual compass with me I'd have turned around heading "south" and would have found my self back at Honister feeling pretty stupid. A prime example of how confusing fog can be and the importance of a good compass.