The overnight stay in Crianlarich allowed us to be at the start in Invervar before 09.00 and hopefully get the first climb out of the way before the day got too hot (it certainly looked like it was going to be a hot one). However, by the time we got to the summit of Carn Gorm it was roasting, and the views in all directions were fantastic. 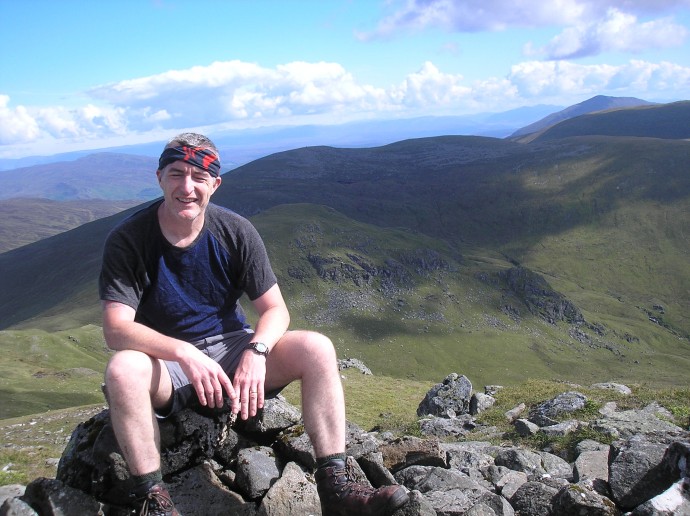 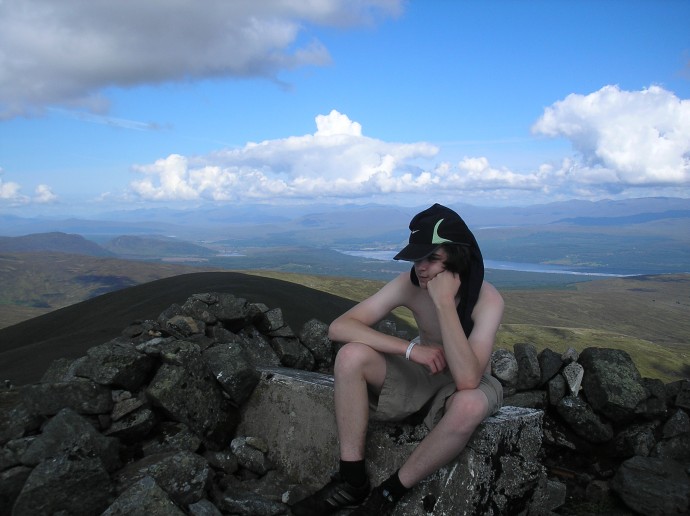 Heading for Meall Garbh my strapped up ankle was starting to ache - I think the bandage made my Scarpa SLs (that are already a very snug fit) too tight and I had to take the strapping off at the summit.

I limped over to the summit of old fence posts for the obligatory photos and noticed a huge number of wasps buzzing around (do they build nests this high up?) 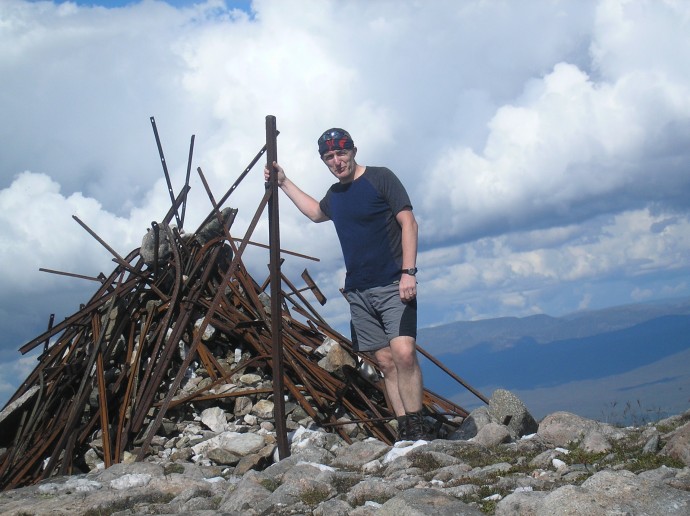 Oddly my foot felt even worse after taking the bandage off and en route to Carn Mairg I was in agony. I had to stop and ask Joe to swap footwear. I pulled on his trainers, whilst he donned my Scarpas - which on his skinny frame made him look like a golf club

The big boots didn't seem to slow him down though and he was close on my heels all the way to the summit. 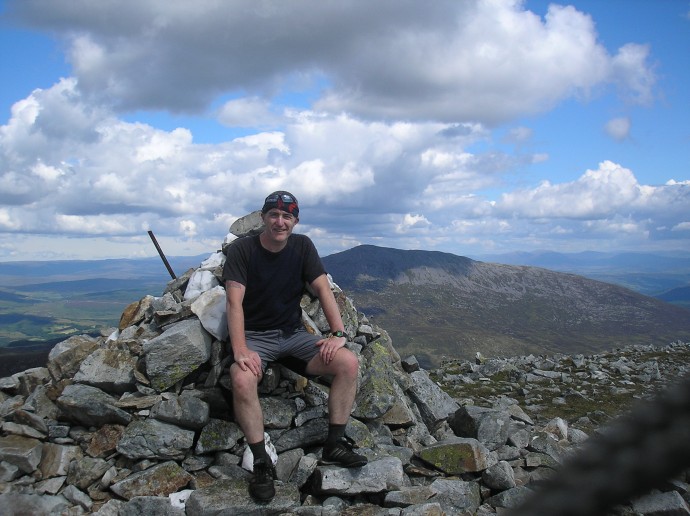 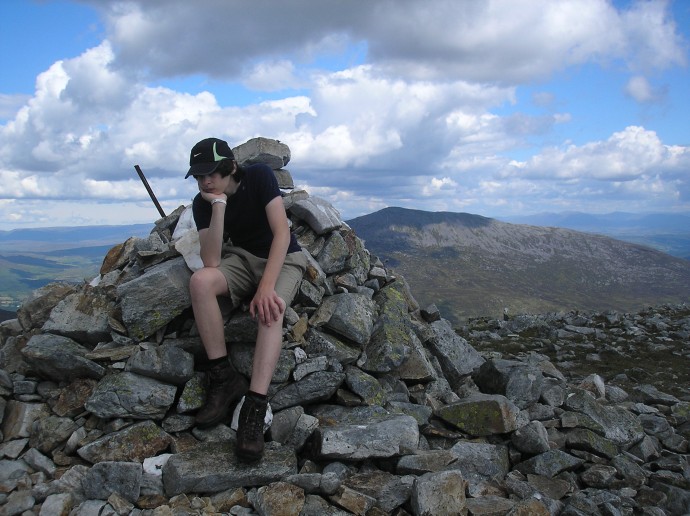 Feeling a little guilty that Joe had to wear my boots I told him he could have as many rests as he wanted for the rest of the day and we took a few minutes on the rocky outcrop near the summit. The views in all direction were fantastic, in particular towards the Lawers range; although Joe didn't seem too impressed. 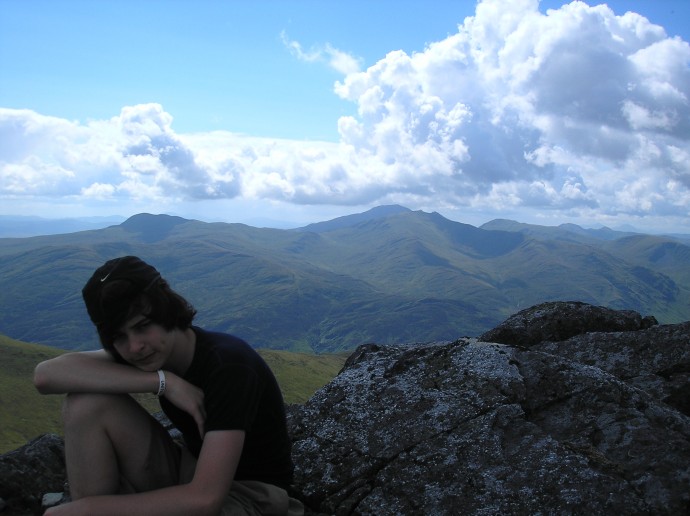 However, he was a little happier in the knowledge that we were now heading for the final peak of the day (and the sun was now behind clouds more often than not).

After a steepish descent from Carn Mairg the climb to Creag Mhor was a gentle pull - perhaps just as well given the rather uninspiring summit. 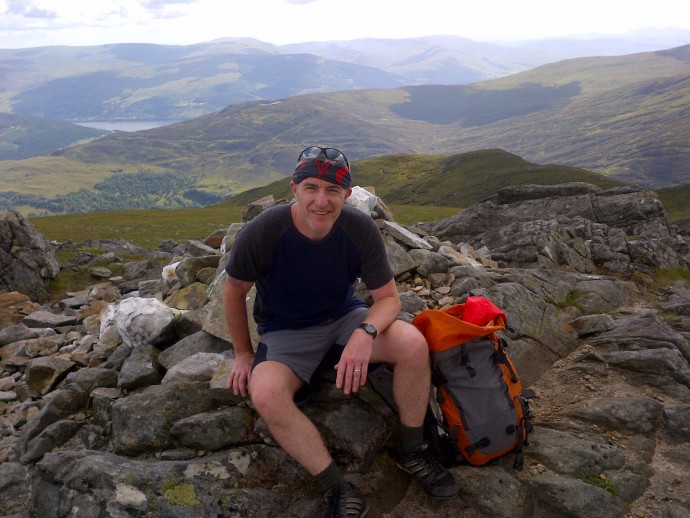 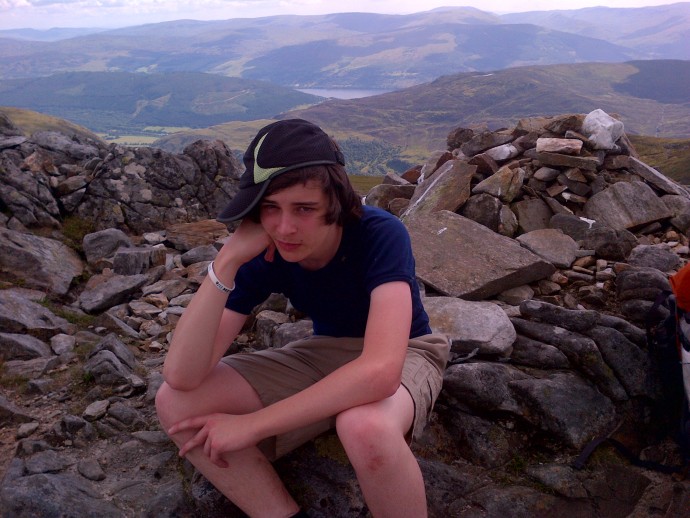 The walk had taken longer than I hoped and on the descent it started to rain; although it was wasn't heavy and there was no need to pull on the wateproofs.

We arrived back at the car in just under six and a half hours and then drove to Killin for fish and chips.

The weekend took Joe's munro tally to 12, although there's certainly no indication yet that he intends to become a bagger. However, he seemed to enjoy the trip with his old dad - when we arrived home and my wife asked him how the weekend had gone he said "It was alright", which for a surly 15 year old is high praise indeed

Joe looks delighted to be there

It was a lovely day...I was down the road doing Stuchd an Lochain in the morning and thought teh weather was perfect...sun, basically no clouds and no wind on top of the Munro which I've never experienced before...it was amazing...those I spoke to on the way down also said it was hot but it couldn't have been more than 23 but I guess it's depends on what you are used to...I went up Meall nan Tarmachan after a lunch at the tea shop...normal service resumed with rain...but wasn't it a cracking morning!