To do the ‘Saileag Three’ as I call them - I believe everyone else calls them ‘The Brothers’, we (the long suffering Richard and I) drove up Glen Shiel until we reached the end of the last forest on the left and parked at the foot of the path going up the burn issuing from Coire Cadha. From there we headed up the east bank of the burn to where the path peters out at a sheepfold and then, still on the same bank, to the right of the Steall Ban falls. The route was wet but pleasant – the weather wet but not quite so pleasant – at least the cloud was mainly off the tops.

I kept looking at a group ascending Sgurr an Fhurail to our right and wondering whether we should have gone up that way. I wanted to do the top really but it didn’t look far from our first Munro to do a quick detour so I thought I’d just see how I felt on the summit. As we reached the corrie, I saw a guy heading up our route who had decided to follow the south ridge of Aonach Meadhoin all the way up – looked pretty steep going. I was hoping to beat him to the summit but Richard was dragging as he hates ascending without a path.

About the area of the conjunction of the burns in the corrie, I decided it was a good time to head off up to the ridge – the contours agreed with me too. We were soon on the ridge, just behind the other chappie. The ridge went up in short bursts but the last short section to the top looked steep – it was – I felt like my nose was nearly touching the grass! We arrived on the summit just after the guy and I had a look down right to the top of Sgurr an Fhurail. I also looked left along our ridge and thought it didn’t look quite as straight-forward as I was hoping! I decided to miss the top so we had a quick break and hot drink and continued left. Ciste Dubh from the summit of Aonach Mheadhoin The ridge down from Aonach Meadhoin to the col was fine after all – slightly rocky and sometimes slightly narrow, but fine. The slope up to our second Munro, Sgurr a’ Bhealaich Dheirg was just rising grassy humps so was also fine. However, the Munro was by now going into cloud. There was a longish climb up a reasonably steep grass slope into the mist but still very comfortable for my nerves. The path zig-zagged up the last section, going first left across the back and then right again to the eastern end of the summit ridge where there was an interesting snow trough right across the ridge. Looked a really nice grassy summit ridge... but where on earth was the traditional cairn? I then remembered something about the Munro book saying a cairn on one of our Munros was along a short ridge.

Richard suddenly said he could see it and I peered into the void where he was pointing. About 50 yards away there was a misty looking man-made tower. Unfortunately the ridge to it looked awful! It was very narrow and rocky and, just to make it even more awkward and narrow, someone had built a dry-stone dyke along the middle of it! As we set off towards it, we were sliding about on wet, greasy rock.

I was furious and let out a loud string of what is fondly termed ‘invective’. It was quite a long and coarse rant and the other chap who had been in front of us and was just returning from said cairn, looked a little shocked. Richard just shrugged at him and explained I didn’t like where someone had put the cairn! I just stated my view that, in Kintail, every mountain had to have a drama – even if it had to be a manmade one like this one and that I was certain the nice grassy summit ridge behind us was much higher! It had to be really as the ridge we were setting out along was a ridge which descends to the north of the mountain so, being a descending ridge, surely must have been lower. There certainly wasn’t much in it!

We groped and slithered our way along the ridge above the misty void (I always think they are far worse than ones you can see). I tried one side and then the other but didn’t like either – I continued to swear. Finally we made it to the cairn (Richard was probably walking but I was on all fours all the way gripping the wall) where I just quickly touched it and headed straight back. Richard said he could see how much I liked it... Back on the safety of the grassy summit ridge we headed along in the direction of Saileag – a hill I just knew had no malice as I’d seen it when we did the 5 Sisters earlier in the week. The connecting ridge was similar to the previous one but the drop on the right was craggier and steeper and the ridge was quite a bit rockier with small crags across it here and there.

It was crossing the back of one of these rocky outcrops that we nearly had a disaster. There was a very craggy end that had a narrow path along the right-hand side near its top and above a sharp drop, the path then climbed up the side to the top of the crag to continue along the ridge. As is traditional when I’m unsure I sent Richard past me to scout it. Like a complete idiot, I stood right behind him on the narrow path (with a nice big drop behind me) to watch where he went. I didn’t have a hand-hold... He set off up a step or two, decided his legs were the wrong way round or something and jumped down backwards to our stance cannoning into me hard... I think I must have managed to move sideways as he hit me and regain my balance, probably grabbing his rucsac (not sure whether I did or not it happened that quick). Anyway, suffice to say, I didn’t actually fall off, but it was very close. More swearing, mostly from me at him - although it really wasn’t his fault as I soon realised and apologised – we must be a riot to follow on the hill! The very peaked crag is the one I tried to descend the back of - rapidly!

We continued uneventfully up Saileag which was a darling of a hill with, as I suspected, no malice at all. We descended uneventfully to the Bealach an Lapain. Now, I’ve always imagined this pass to be unpleasantly steep on the side above the road (we used the other side to do the 5 Sisters and we didn’t have a look at the time) so I warned Richard I may not like the next bit. I edged my way over the edge of the pass to where the zig-zag starts and gingerly started down... I could see a van roof directly beneath my feet looking about the size of an ant. All the way down the very crumbly-edged zig-zags I kept imagining that at any moment I would plunge vertically downwards and through the van roof. I was so hesitant I was going at something less than a snail’s pace and fairly flattened back against the ground behind me keeping very low. Richard thought I was being ridiculous but kept himself in front of me on each zig-zag to try to give me confidence in the hope that one day we’d eventually get to the bottom and I’d stop whingeing and give his ears a rest.

About half way down the path trended well left above the forest – looked nice and soft after the van roof – also the gradient was much less so I shut up and smiled in relief. We didn’t want to go right down to the road as we could see that there was a nice forest road to take instead of the horrible walk back up the main road to our parking. Of course, it being Kintail, in our way was a deer fence... and as usual there was no stile in sight (I suppose we were taking a short cut though but lots of people had padded up and down it around that point). We climbed the fence and descended short steep grassy banks into the thick forest and landed bang on the start of the forest road.

After a couple of nice bits of forest walking with great views of the South Shiel ridge to the right (so that I could study it at leisure for bits to worry about) and a short section of road we were back at the car and shortly after the pub at Shiel Bridge. 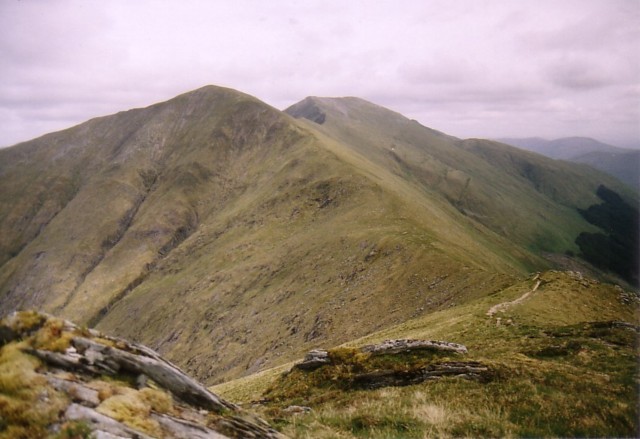 Nice report MC...I like these hills, but know what you mean about that Cairn on Sgurr a' Bhealaich Dheirg, the connecting ridge is not hugely pleasant (especially under snow..). I remember when I did Aonach Mheadhoin there was such a gale blowing on the top that we abandoned plans to do the others and went to the pub instead. Next day I did Sgurr a' Bhealaich Dheirg from it's SE ridge Meall a' Charra followed by Saileag (100th munro), followed by all 5 of the 5 sisters (including Sgurr na Moraich), so although I've been up all these hills I've not done the bealach an lapain path. It's famously steep though isn't it?

Well I probably wouldn't have minded going up it - I tend not to look and just get on with it... but it was disconcerting with the tiny van roof below