How I got the bug: my first two Munros

How I got the bug: my first two Munros


Having recently hit the pretty round, nice number of 80 Munros, I thought back to the very beginning of my hillwalking adventures, when I was a total Scottish mountain rookie, guided by the famous Kevin the Munro Conqueror

In my early twenties I did quite a bit of exploring around the Carpathian mountains (Bieszczady on Polish-Slovakian border being my favourite stretch of high ground) but then I moved to France and concentrated on finishing my thesis, I was so busy that any rambling or rouge travelling was out of question. I could only relax and return to more active lifestyle when the big enterprise was eventually done and dusted.
When I met Kevin, he was already an experienced hillwalker with 20 years of hill exploring and over 90 Munros on his list. Not the fastest Munroist on the planet, but he's definitely on his way to complete the list. I knew instantly I made my perfect match. Most couples date in restaurants, pubs, discos - we went for a trip around Loch Ness to look for the monster (never spotted Nessie - probably didn't drink enough whisky to see it

). We lurked around the Moray coast, got lost once in Culbin Forest, went to Skye to the magical Quiraing circle... Then came more serious lowland routes, I liked the Loch Affric circle the most. After a couple of years of rambling here and there I lost two dress sizes and, well, I felt I was ready for the hills.
We started in early spring 2008 and by the late summer I have successfully bagged a few Corbetts and Grahams. As we celebrated our first wedding anniversary, I asked my second half to arrange a Munro trip the following weekend. Of course there was a question, what to pick as my very first M hill. Logic would suggest something quick and easy, Ben Wyvis or Fionn Bheinn for example, but I wanted to start my big adventure in Glen Affric, mostly for sentimental reasons. I stubbornly insisted on climbing Mam Sodhail - Kevin had no choice but to give up

In the end, I managed to bag Carn Eighe as well

Here is our route:

our_route.gpx Open full screen  NB: Walkhighlands is not responsible for the accuracy of gpx files in users posts
The ultimate dream would be to go over the whole ridge via the top of Sgurr na Lapaich, but I wasn't brave enough for THAT yet. So we ascended the most popular route up these hills, the old stalkers path up Coire Leachavie.
In the parking area we met a flock of curious chaffinch. They came really close, one of them landed straight at my feet - they surely hoped for some crumbs... 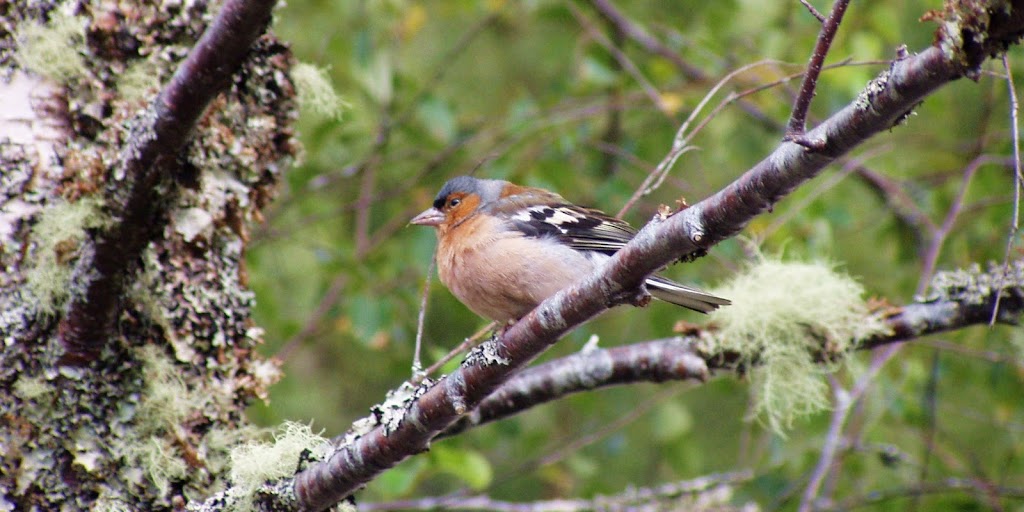 Some more chaffinch snapshots here: http://www.walkhighlands.co.uk/Forum/viewtopic.php?f=3&t=24209
As we walked along the shore of Loch Affric, I was busy photographing mushrooms. Collecting info about fungi (and the mushrooms themselves as well

) has always been my hobby.
Fly agaric: 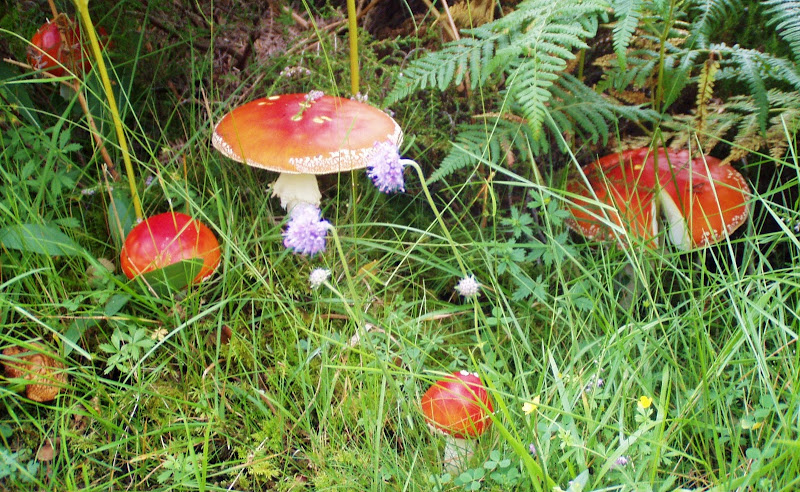 Orange birch bolete (yummy ones for soup by the way!): 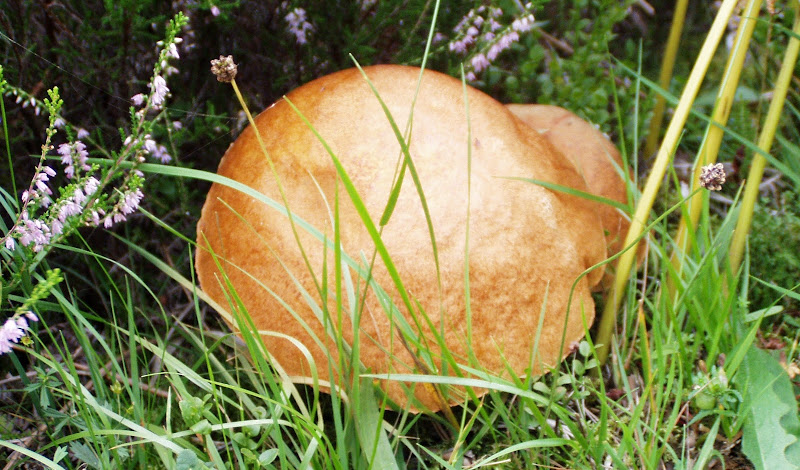 There was some cloud lingering about the tops of the hills and we didn't expect totally clear summits, but this is one of the most beautiful spots in Scotland even from the lower ground: 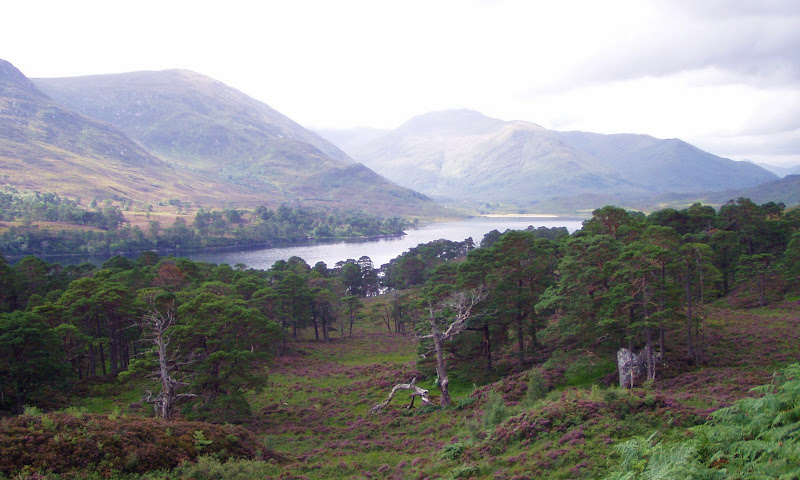 Kevin was a bit overprotective, stopping ever so often to ask me if I was doing all right... 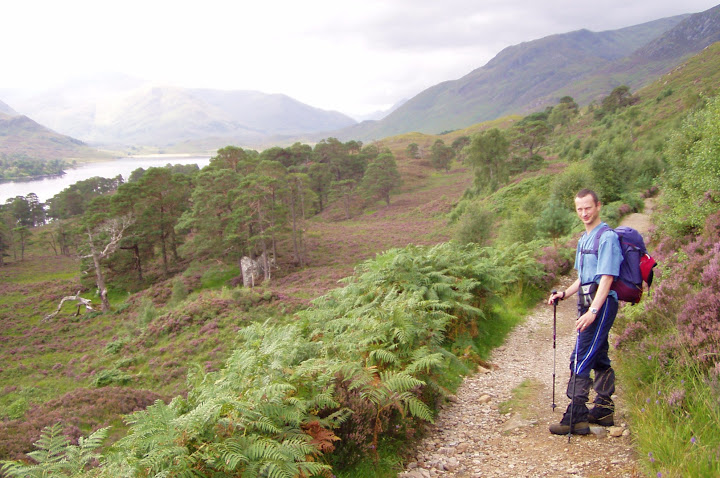 As we continued our walk into the wilderness, the cloud lowered... 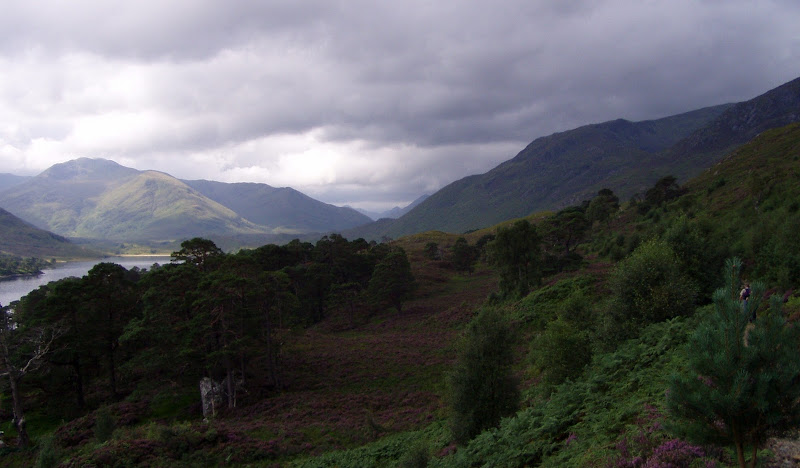 ...but even the perspective of NOT getting any views whatsoever didn't put me off! 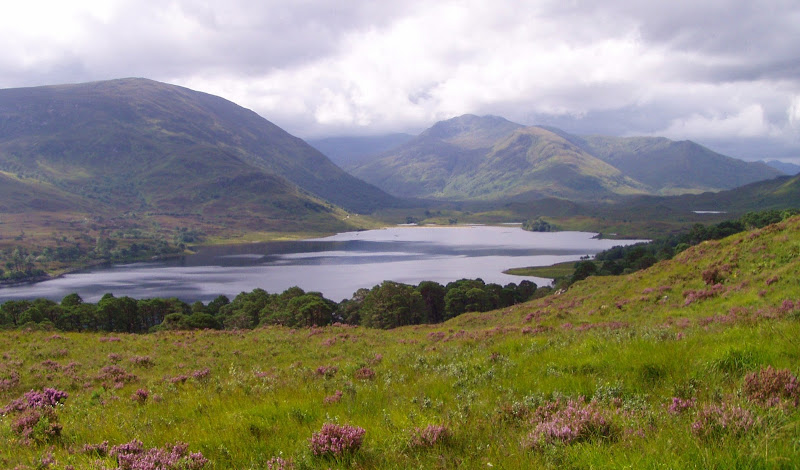 Some sunshine as well, surely it won't be too bad! 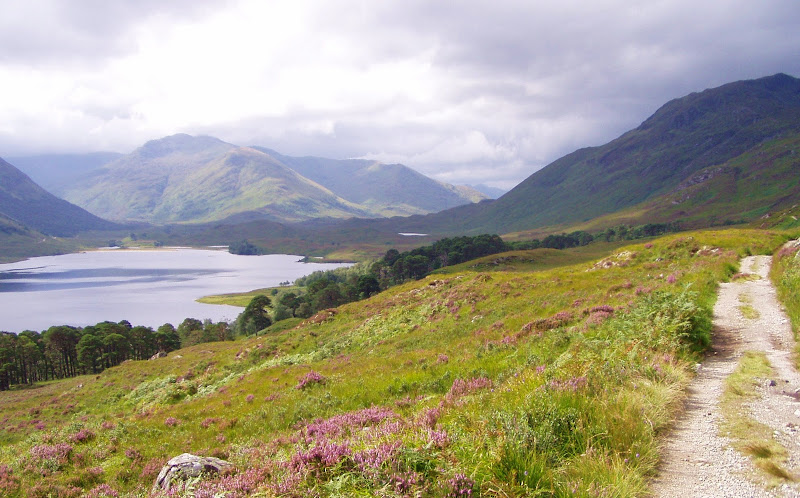 The bulky shape of an Tudair Beag dominated the view: 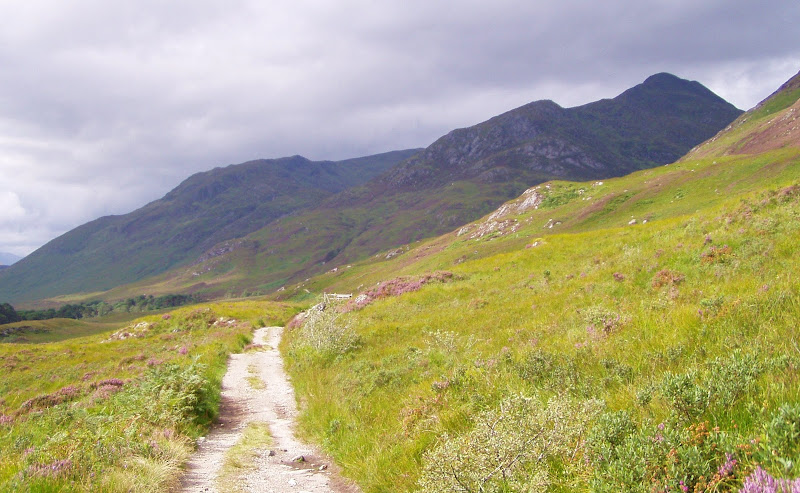 We found the path branching into Coire Leachavie and started climbing. I had a brand new pair of goretex boots and they took some time to adjust to my feet, but apart from that, I really enjoyed my experience. Views down to Loch Affric were getting better: 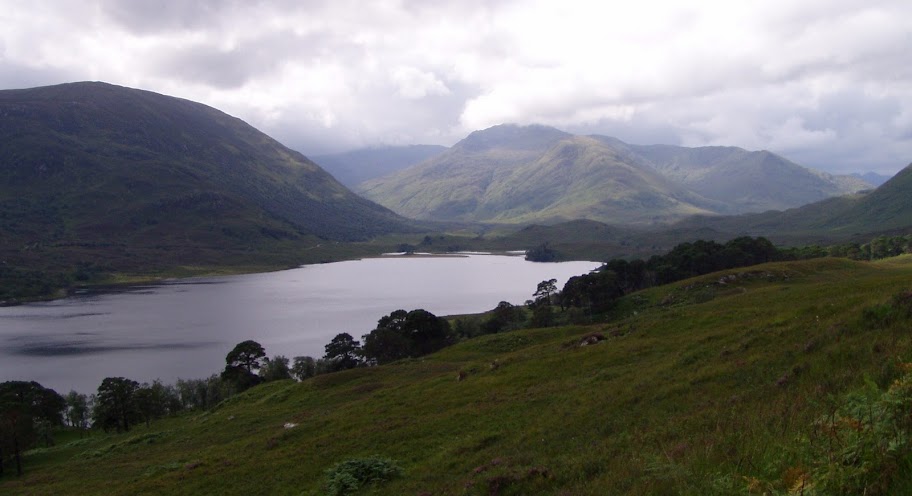 A short break to strike a pose... 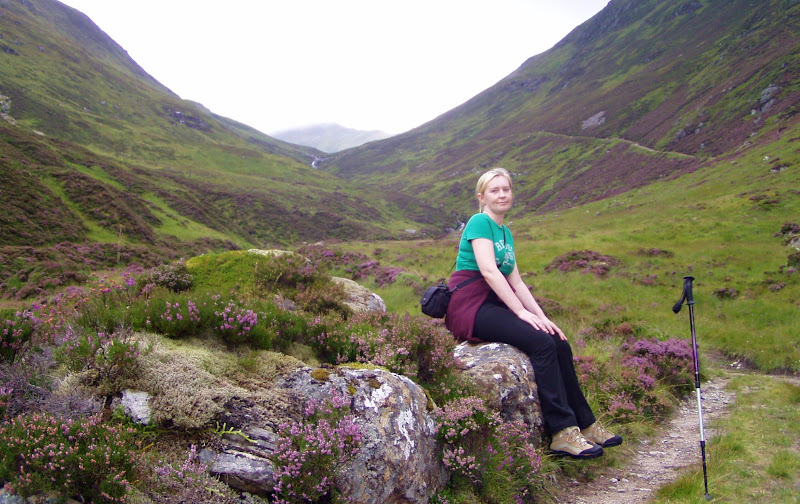 The cloud was descending upon us, what a shame... It looked like we weren't going to get any summit views... Well, I took what was given... 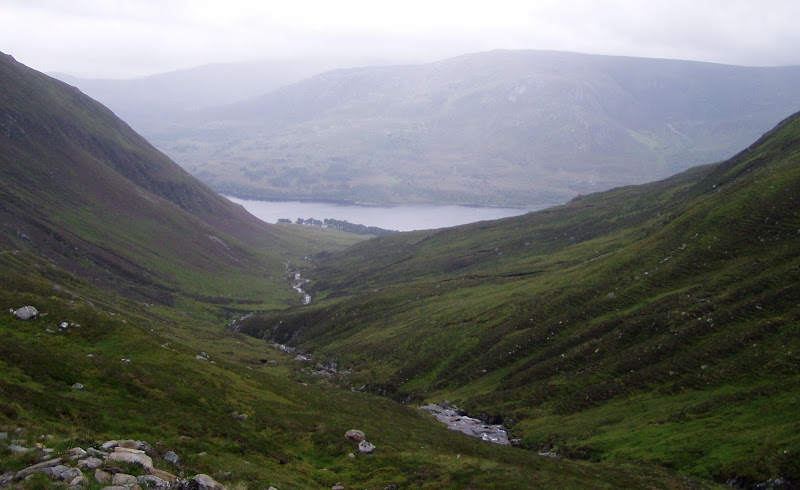 Half way up the stalkers path: 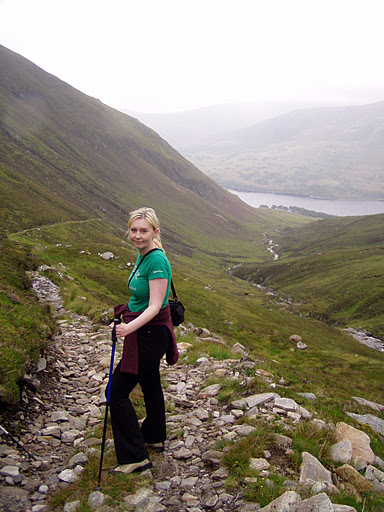 Higher up the glen, we lost the pano down to the loch... 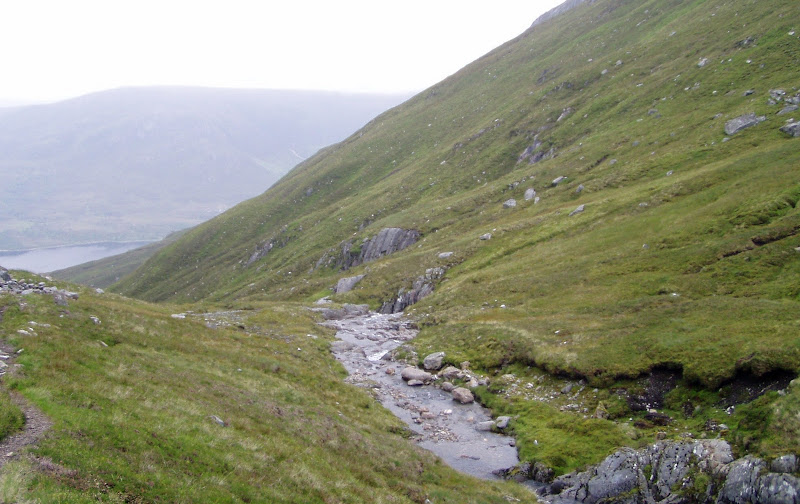 ...and looking up, we could see little, too! 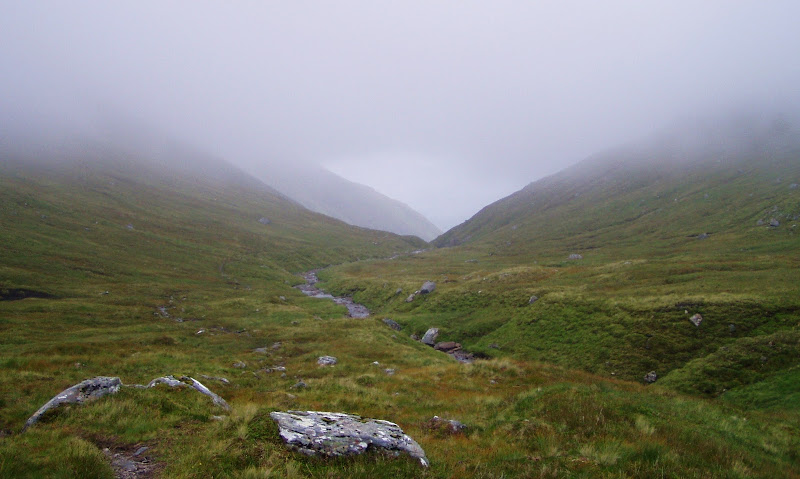 I relayed on Kevin, the experienced one, to lead us through this clag... He had been on these Munros twice before (he used to live in Cannich so they were just around the corner

) so I assumed, he knew exactly where he was going. Even with the map and the stalkers path still obvious, I wouldn't be happy to find myself alone on the hills in such conditions. Back then, they all looked BIG and SCARY 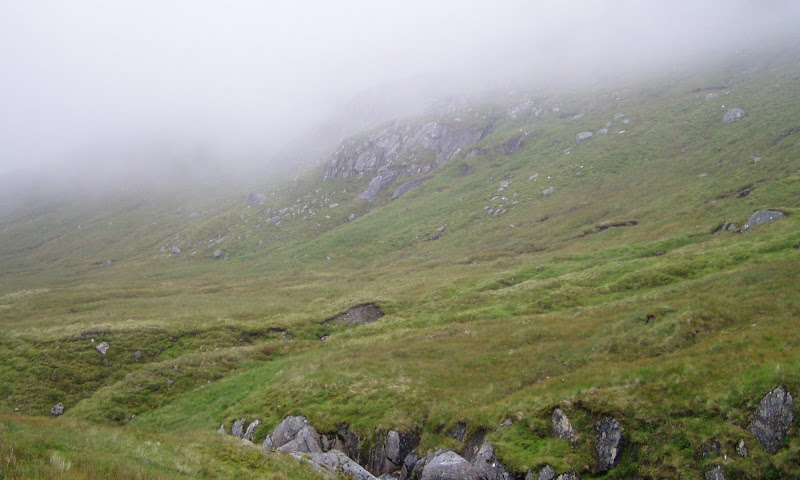 We climbed all the way up to the col between Mam Sodhail and Ciste Dhubh, a lower top to the south. The clag was still thick and milky, Kevin made sure we took the right way... 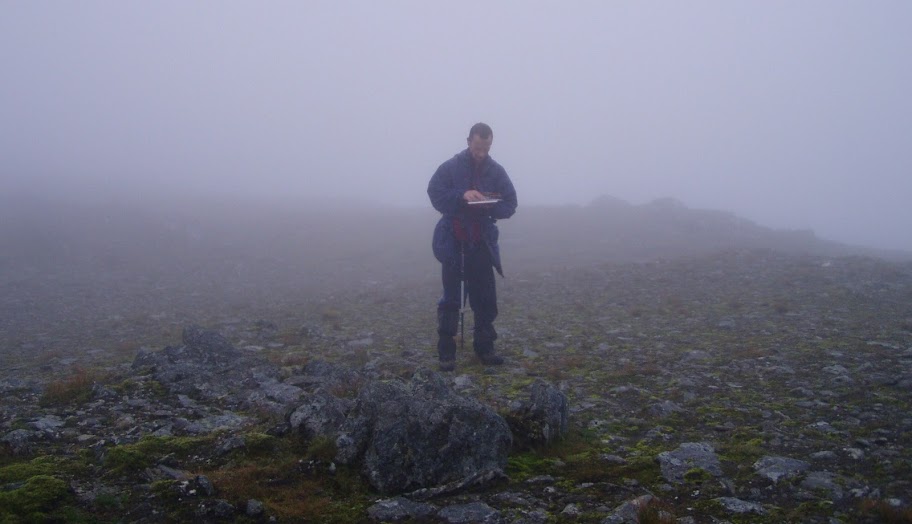 We reached the summit area of Mam Sodhail and... we spent quite a while wandering around it, looking for the summit cairn! Hard to believe if you bear in mind, it's one of the biggest Munro cairns... We found it eventually and I posed in front of it, proud to have climbed a Munro at last! 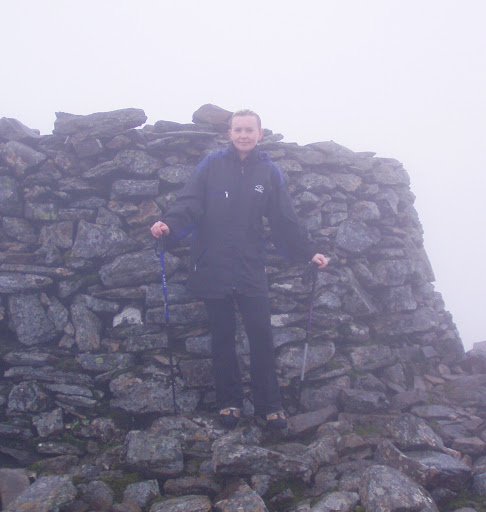 After a refreshment break, Kevin asked if I felt up to continuing to the second Munro, Carn Eighe, which was only a stroll away

Well, why not!
There's not much drop between the two so we didn't descend below the cloud level, but saw a glimpse of something emerging at one point: 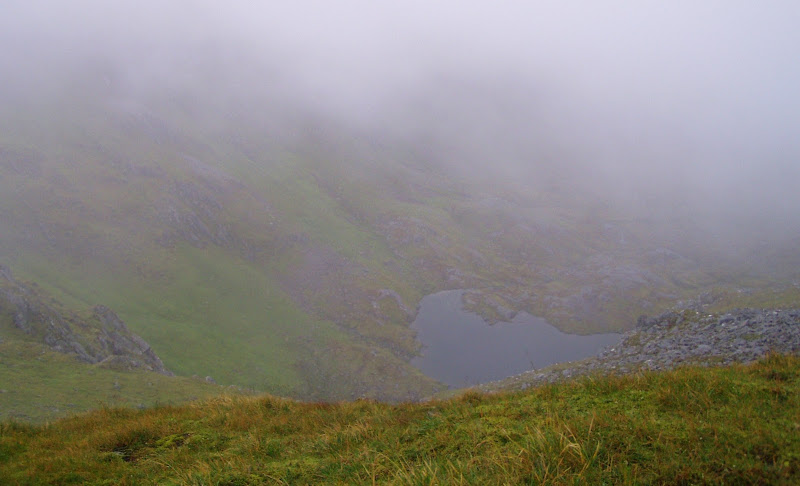 Carn Eighe from the col: 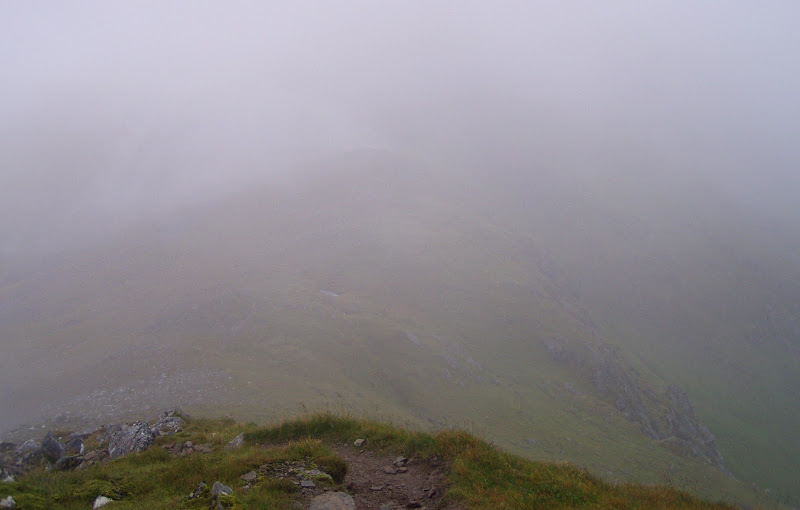 On the way to the misty summit: 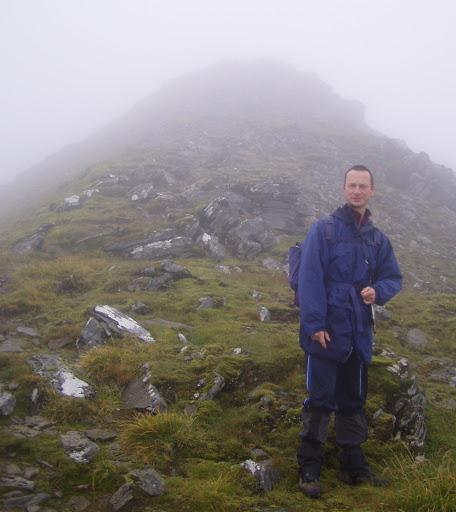 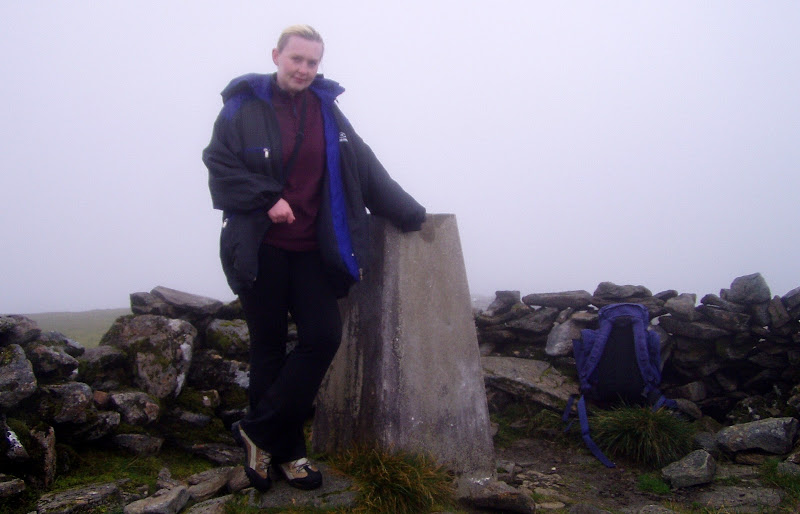 I knew there was one more Munro summit on this ridge, Beinn Fionnlaidh, but I didn't feel up to it, besides, it was getting late. So I made a solid promise to come back to these hills in the future - and definitely on a better day. I so wanted to see the views! But for the time being, the satisfaction of bagging my 1 and 2 had to suffice.
Conditions didn't change all the way down: 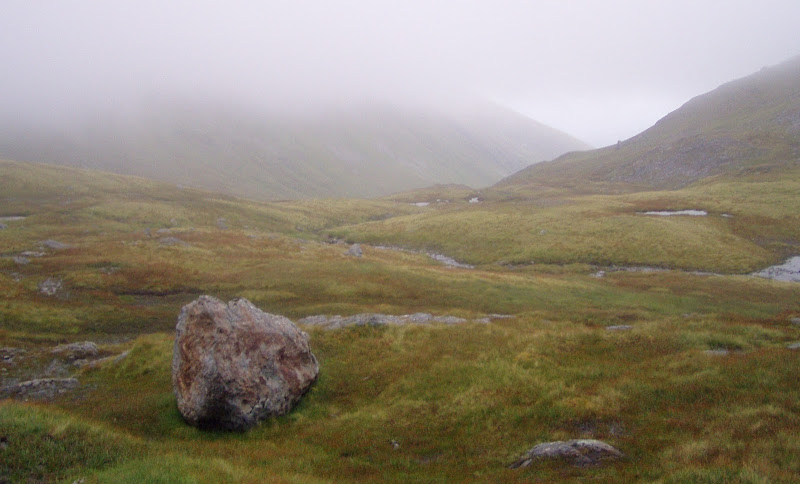 It was already dark when we reached the car park and I was exhausted, but oh God, I didn't regret a single minute!
This was four years ago and today, with 80 Munros more and another two dress sizes less, I can say I'm pretty happy with my mountain adventures. We're having a lovely high-pressure weekend (at laaaaast! hoooray!) so possibly, we'll visit the Affric Munros again. And this time it will be all three plus the top of Sgurr na Lapaich. Can't wait. Meow!

Lovely report, and interesting to see a "historical" one like this

! I haven't done these two yet - they're a bit of a drive from Glasgow... Most folks seem to start with Ben Lomond or Ben Vorlich; it must have been great to start with a couple of less well trodden ones

.
I bet you were used to better weather in the Bieszczady, mind you

Some beautiful photos there BP, the older ones really help tell a story, though surely if it was 4 years ago you would have been in your teens

Don't be embarassed panther about getting lost in culbin forest, the other half and I got lost there as well

, it was dark by the time we found our car

. Great report by the way... Cairngorms for me 2mrw MACDUIE & GORM