A whole load of Kayak - Ben Alder and Beinn Bheoil

A whole load of Kayak - Ben Alder and Beinn Bheoil


We had a simple objective. An 'epic' long weekend, two pals, going remote, pushing ourselves... a bit. Kayak on Saturday down Loch Ericht to the reputedly 'haunted' Ben Alder Cottage, climb Beinn Bheoil and Ben Alder on Sunday and then kayak back out Monday. Should be no problem.

Here in gives a taster for others who might consider such a trip.

The mountain weather information service forecast for the weekend was awful. We discussed revising our plan. However, it's hard not to plough on when you've had an 'adventure' in the diary for so long. Days were booked off work, my friend Robin's wife and kid were being visited by granny and grandpa. My girlfriend was away to her folks. We'd bought a selection of foil wrapped fine dining . The map was pencilled and then inked with a route. Robin had even bought a new Spork. We decided to crack on.

We put in at Dalwhinnie. The first road on the left immediately on entering the town took us towards the hydro electric dam. It's a bit of a carry and a wheel to get two paddle boats to the water. But the loch was still. How long before the weather turned?

We started the journey, light breeze behind. 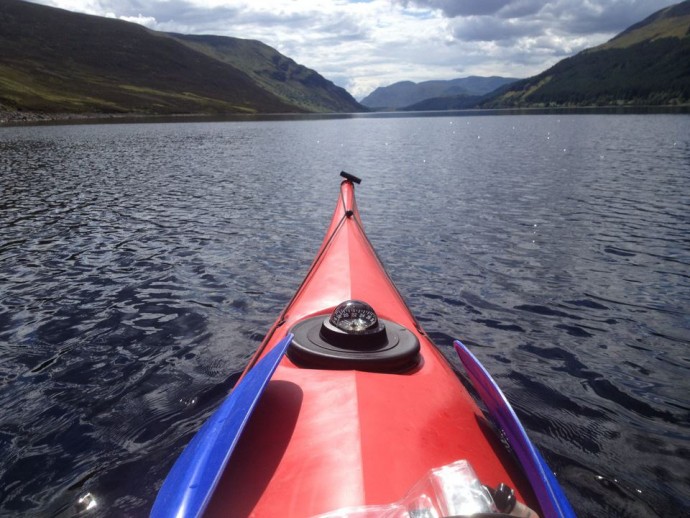 Starting out on Loch Ericht.

The first hour was bliss. We paddled hard. We paddled light and glided. We sluiced left and then we sluiced right. We turned in circles, forwards, backwards. We must have covered a whole two miles. Getting used to our trusty steads

It was after about two hours that I started to realise how far a 12 mile kayak is. The skin on my thumbs had started to dissolve like a dunked digestive. Very quickly I had two blisters each one like a bubble wrap bubble. Did I stop and cover them before they got worse. Of course not. The weather was holding for now. We paddled on. There was a lovely moment when we hit a calm and flat stretch near a stream and scores of trout burst the surface surrounding my boat. I slowed and enjoyed the glints of silver, the glimpses of tail and fin.

Onward and cloud was building menacingly on the horizon. Another beach stop and we stretched our legs. The clouds continued to darken. We pressed on. I'll just get to that rock. I'll paddle non stop until that headland. I'll put in a good effort until that tree. Little targets. Ways to break up the journey and distract my mind from my bloodied and blistered thumbs and the growing ache in my shoulders.

We could now see Beinn Bheoil. We skirted the side of its slopes. Waves started to rise. Choppier, side slapping, kayak bouncing. Surely not far to go. I'll keep paddling until that next headland. Just keep the tempo going.

Finally, we turned another headland and could see the cottage. It was moody. Rain was close. We had arrived. Slowly, with stiffness in our arms, we unpacked our kayaks. The bothy was unoccupied. We took up what we reckoned to be the best of the three rooms. The pain of the last couple of hours of our 4 and a half hour journey in was made up for by the amount of luxury we had compared to walking a rucksacks worth into such a remote place. Almost as soon as I got the Primus on for a brew, a wicked wind whipped against the bothy and rain poured down. Looking out the window the loch was transformed as sheets of water licked horizontally across rough waves. Robin and I looked at each other and laughed. That was good timing.

We lit a couple of candles, cooked up some beef stew, rolled out our mats, discussed the plan for the next days walking and were asleep by 9.30pm. There's nothing like a day on the water to tire you out.

The next morning the stream outside had expanded after a night of rain. Robin, without realising, cooked the next two days breakfasts of beans and sausages in one go. It was a hearty feed. Neither of us struggled with double rations.

It was a grey start. Thankfully, however, it wasn't raining. Showers didn't look far away as we started the climb towards the col between Beinn Bheoil and Ben Alder. While our shoulders were still stiff, our legs were fresh. We made quick progress. It was soggy going, along a burn, into a bog before the col. Along the horizon was the silhouettes of deer. Frozen. Staring at us. Like we were the first humans they had seen. Maybe, we were. It certainly didn't feel like well trodden ground. And this on munro's technically 'not far' from Pitlochry.

Cloud closed in. We found ourselves checking the map regularly, navigating towards the first summit. It was a lovely ridge across to Beinn Bhoill itself. No views. But, surprisingly the rain we had expected wasn't materialising. We made the summit by midday. Robin at the summit of Beinn Bheoil

We re-traced our most recent steps and descended slightly. We grabbed lunch just above what we reckoned to be the 'midge line', the height at which we'd finally stopped being bitten having left the burn on the way up.

Lunch was in anticipation of the hardest part of the day. A pretty steep ascent of a few hundred metres straight up towards the horseshoe shaped neck of Ben Alders approach slope. We surprised ourselves, again agreeing it was 'kayak fresh' legs that were making short work of the slopes.

However, what really shocked us was that this ascent co-incided with the unexpected. The cloud that had smothered the hills and our views all morning lifted and dissolved almost in unison with our upward footsteps.

We found ourselves atop Ben Alders slopes and onto its summit in glorious sunshine and with views for miles. Amazing. You couldn't have planned it better. Approaching the summit of Ben Alder

We reached the summit of Ben Alder by mid afternoon and sat in our t-shirts enjoying the views and temperature. Robin at the summit of Ben Alder

We made a straight forward descent back down the west slope of Ben Alder. Picking up a stalkers path we followed it back to the bothy. About an hour after returning, a wind kicked in off the loch and the skies opened. Everything around us was soaked for about an hour. We couldn't believe it. We'd missed it again.

We chatted and dined on lamb hotpot. Crackers and cheese. The fire was on and the hip flasks out.

The whiskey starting to dull the pain in my shoulders, thumbs and legs in that order. A wee celebratory dram back at the Bothy

It may come as no surprise that we can report no ghosts from this apparently 'haunted' bothy. Even after, a few drams there were no strange lights or noises that I noticed. That said, I did get a surprise during the evening. As I opened the door of the bothy to go visit with nature I found myself briefly face to face with a young stag. It was within a couple of metres of the door and bolted on seeing me. I was left a little startled, laughing and wondering if this young buck could be the cause of 'haunted' door knocking and window tapping.

I have no pictures of our kayak journey out on Monday. It was a hard day. The wind had indeed got up as predicted. And we had to paddle into it this time. Somehow we still avoided rain. It was non stop effort. Our mental strength tested almost as much as our physical strength. It took us 6 and a half hours of paddling to get back to Dalwhinnie. A golden eagle flew ten metres above my kayak early on in the day. It was beautiful.

Would I recommend kayaking into these hills. Yes. It really made it an adventure. Would I want to help set people's expectations as to how hard a kayak it is. Yes. We realise now that we'd managed a half marathon with our arms each day with a couple of remote munro's in between.

lenster wrote: Robin had even bought a new Spork.

My, you really do have all the cool gear, you two

!
Lovely report - it must be great to have these two in the bag

It was a green Spork as well, which apparently matters.

Thanks Bobblehatkenny. Yes, great to visit such remote summits. We didn't see anyone else the whole time.

I've been out a few times and seen folks in canoes, and always thought I wouldn't mind tying that in with a walk, maybe not such a big walk as yours, but still VERY appealing. And had wondered how I would bag these two in the future, canoe over mountain bike, hands down.
Great report, great adventure.
Cheers for posting up.

Great report, I've stayed there overnight in similar conditions. Don't know if I could manage all that paddling though!

Thanks Jester. Just read and loved your Aonach Eagach report.

Thats fantastic, what a trip.

Excellent report Lenster. Done a fair bit of Kayaking so know the ropes. Great expedition and lucky with the weather. Waves and wind always pick up on the home leg

Well done both of you, that's a great way to spend 3 days! You deserved the weather to turn out for you, and a fine bothy to keep you sheltered both nights.......still to get there myself, and been wondering for a long time, which way is best to do it?

There is no better way to spend a tuesday afternoon behind a desk than reading fine reports like this one. An excellent adventure indeed. Jealous!

Thanks folks, comments like those make the report writing all the more worth while.