Finally, a weekend that promises a bit of sunshine for the Lakes so I took a Friday morning off work and although Damson and I got up a bit later than we had planned, we were prepped and ready to go !
We set off at about 10:30 from home arriving in Patterdale just over an hour later due to holiday traffic throwing the car onto the grass banking opposite Patterdale Church.

The start of the walk took us down the road to the Old School before heading down the track road to Side Farm.
Pressing on through the farm we headed right and at the gates turned left through another gate to find the base of the Boredale Hause track.
Ordinarily this is fairly easy as it keeps a constant gradient all the way but the added heat factor from the sun made for slower progress and several people were finding it hard work.

Crossing straight across the Hause and taking the right hand path led us around the front of the pikes to a point where we glimpsed our first sight of the tarn. Here we took a small grass path back on ourselves heading upwards to our left and a straight path up to the most northerly of the 2 pikes.
Fantastic views back to Place Fell & Ullswater were captured from here as we watched our fellow walkers plodding up the tracks behind us (including a young lad and his mum who were tacklng the C2C - good luck to you both)

A hop across to the southerly summit overlooked Angle Tarn and gave us sight of the rest of our route up to Rest Dodd and onto The Nab. 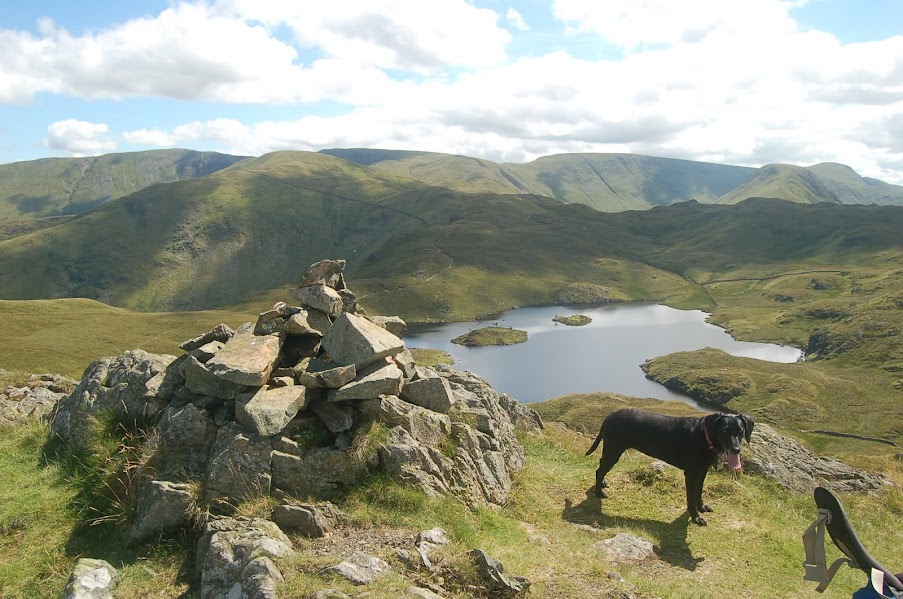 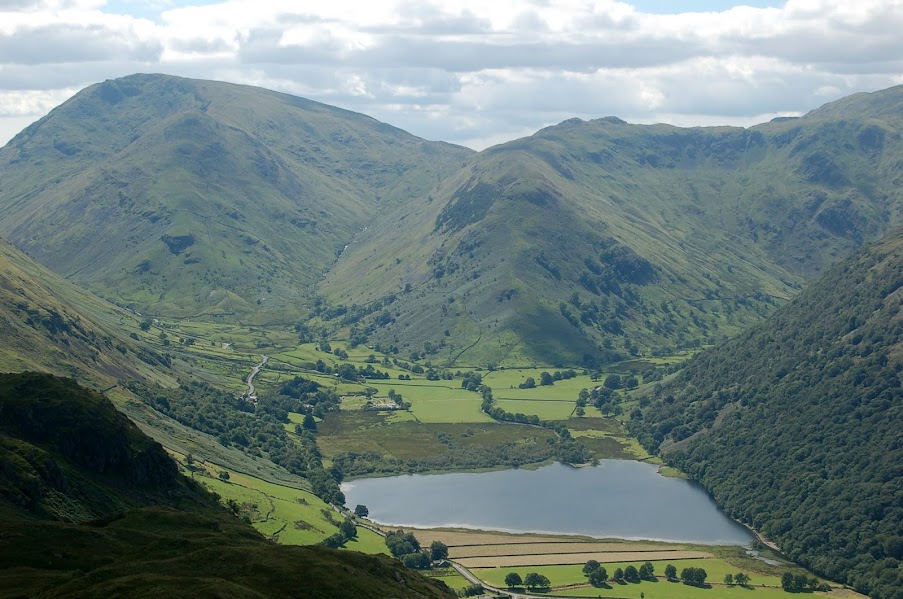 Dropping down from the Pikes, we headed for Angle Tarn and took a few minutes taking in its cooling air. 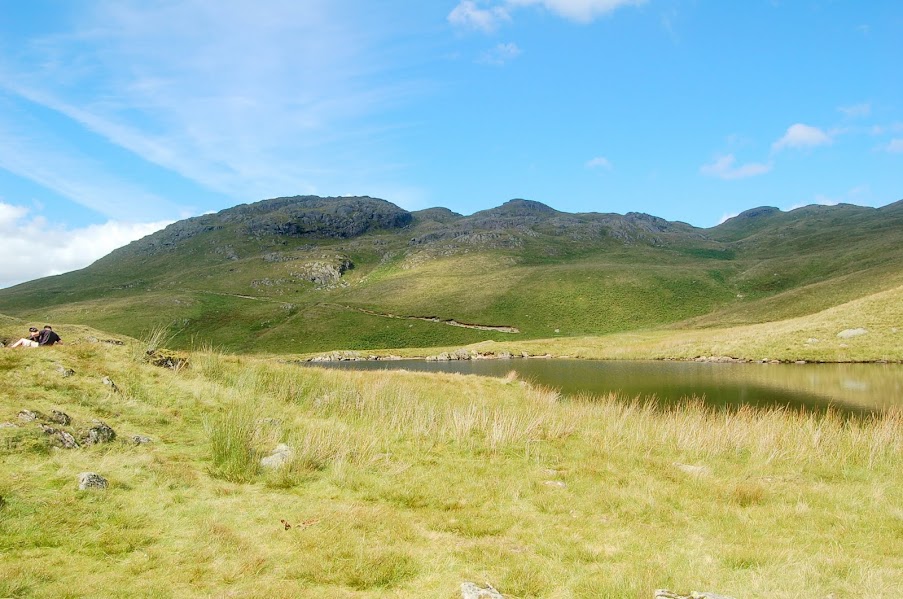 Pushing on we rounded Satura Crag and took the route towards Rest Dodd which actually heads to the left onto a small grass plateau before tackling the last steep section to the summit (looks more direct on map).
Rest Dodd is a very appropriate name as the heat was beginning to sap our energy reserves.

We dropped down to the north off a very steep section and down to the wall sectioning the deer sanctuary covering the ridge out to The Nab and surrounding valleys. Deer breeding season starts around September to February and this area can be restricted during those times. Today it wasn't a problem but the ridge is full of sunken bogs and large stretches on mud which made for slow progress. This mixed with a large volume of bugs made this a fell to be bagged and then escaped, coming back the way we came upto the boundary wall.

Rest Dodd round to Angletarn Pikes from The Nab 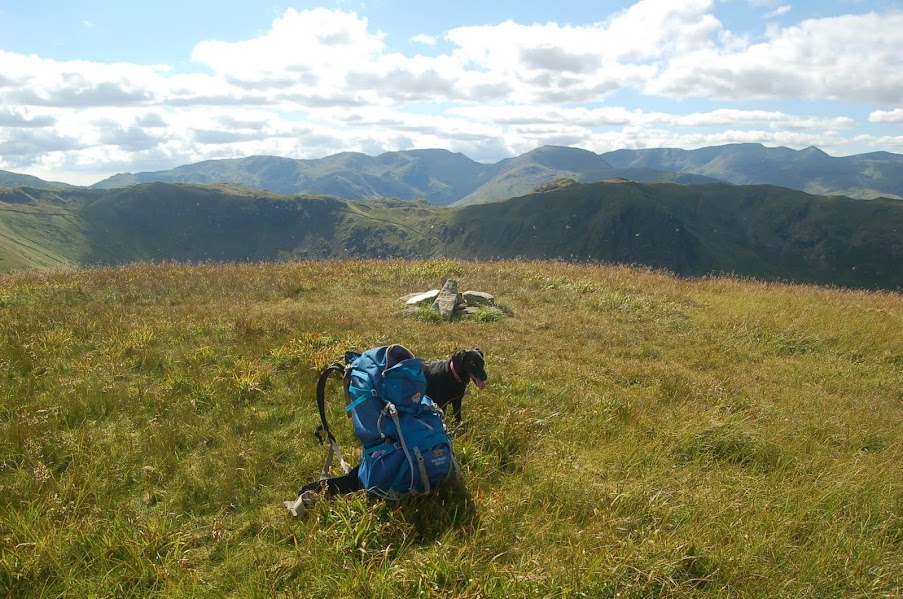 Damson on The Nab 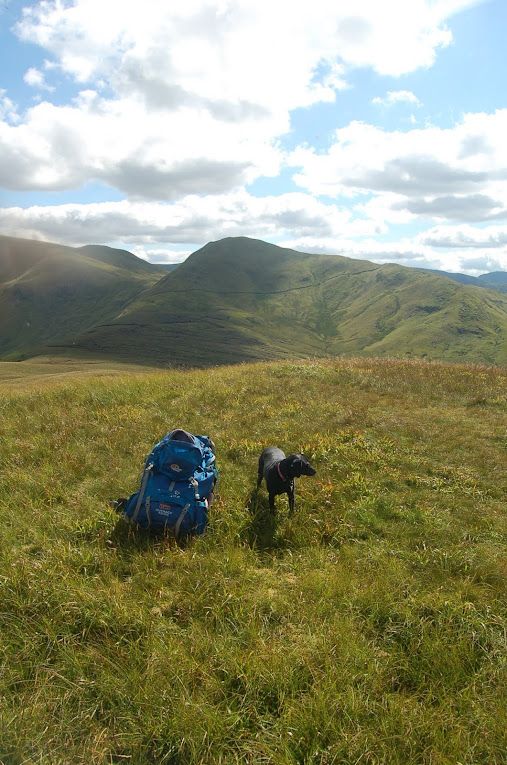 Damson on The Nab with Rest Dodd in background

Rather than climbing back up to Rest Dodd, we followed the wall to our right heading back for Satura Crag.
The sun had traversed round the side of Rest Dodd at this time and was bouncing off the fells banks and the wall making this section comparable to walking in an oven. I was only managing 20 meters or so at a time before having to stop to draw breath and wipe the gallons of sweat pouring down my face.

After making it out of this cauldron, we made our way back to Angle Tarn where I went for a fifteen minute rest by the water side whilst Damson, who was also suffering with the heat at this point decided a nice paddle about in the water was the better use of time. Had there been no-one around I might well have joined her, but there were 2 tents already erected there now and leaving me wishing I'd brought mine. We came back the way we'd gone and finished off every drop of liquid we'd taken.

).
A few beers and some pop soon helped us recover once home.
Not much happening today (Saturday) but potential for another day out tomorrow if the weather holds.

I love the walk up to Boredale Hause

Glad you and Damson were able to get out and make the most of the weather, Craig.
Some beautiful views

Another stunner Phooooey, Damson looks a bit happier in this one

beautiful photos, those two panos at the start are spectacular

Hi Chris & Susie,
Thanks for your comments !
I've a few more to do in this area including Place & Beda Fells which require the ascent to Boredale Hause from Patterdale side so I'll be able to make a good comparison whether I made it hard work for myself or not in cooler conditions. The panoramas are excellent from that vantage point so the good conditions made the photography easy.
The walk has taken its toll on poor Damson as she's been moping about round the house trying to keep cool for the remainder of the weekend. A swim down on Askam beach should kick start her again tonight !!

Susie, I've replied to your post on Wasdale and again can't believe that the water remained so still for you although Angle Tarn wasn't too bad for our Friday jaunt either ... not quite the reflections you shot though !
50 odd to go and a week or so off work soon so I'm hoping for good weather ... now that the Olympics has finished there's nothing on tele worth staying in for !!

Great report Phooey and that looks like a really nice wander and some great weather and photo's to go with it!!