Five in the fog

Five in the fog


Having infected a friend of mine (Captainslow) with the Munro climbing bug, I returned from holiday this week to find that in my absence he had bagged four more! Despite/because of the fact that he had spent the past four weekends walking he was keen to hit the boggy faint paths once again. So we headed off early on Saturday morning to Loch Tay to attempt the Lawers 5.

When I had originally suggested this route it was with the intention of completing three in one day and two on the next but he misunderstood this as all five in one go and managed to persuade me that it was possible. I was still a bit dubious but figured that we could always bail out after three.

The day started fairly overcast but we were optimistic that it might clear later. We parked in the Lawers hotel car park and set off along the road and up the track towards the first summit of the day Meall Greigh. The path is very easy to follow for the first stage, reasonably steep through a wooded area then over some open ground. The peak ahead was wrapped in cloud so no good views on the way up 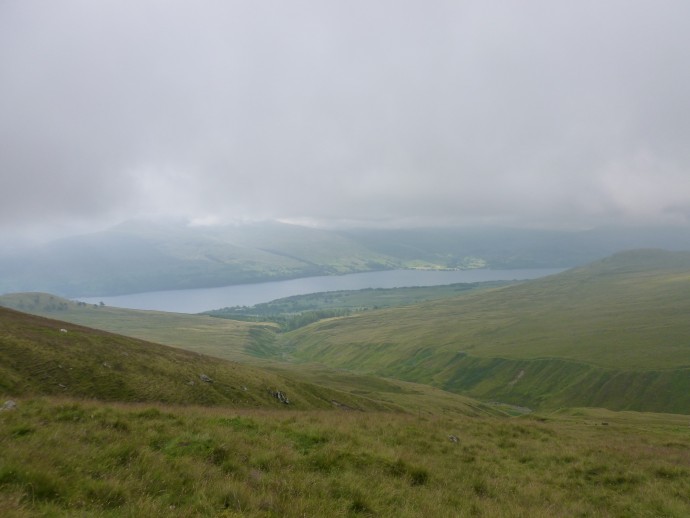 Last view of the loch before entering the cloud

For the second part of the ascent we cut away from the stream we had been following up a tributary and before too long we were enveloped in cloud, trudging up a fairly featureless slope. As long as the stream continued navigation was pretty simple but once we reached the source we were reliant on the compass skills of captain slow. These proved to be excellent

and we reached the summit cairn after not too long. 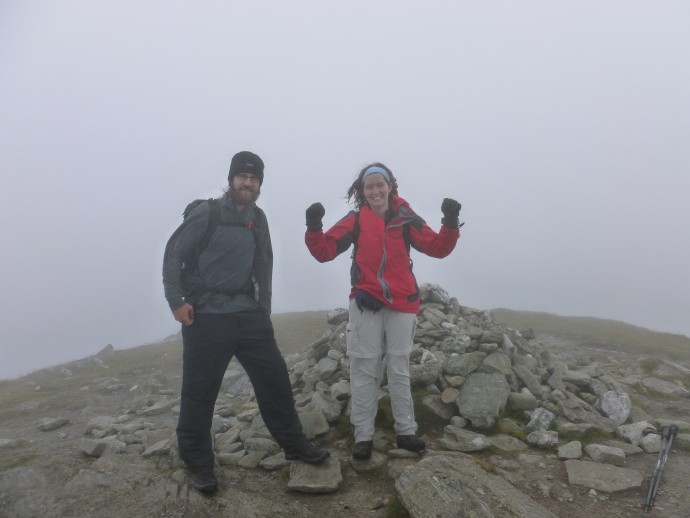 With our nerves settled a bit after having successfully managed the first bit of navigation in cloud, we charged onwards towards Meall Garbh. Again it was a little tricky in the clouds until we reached a very helpful fence, which we were able to follow most of the way up to the summit. 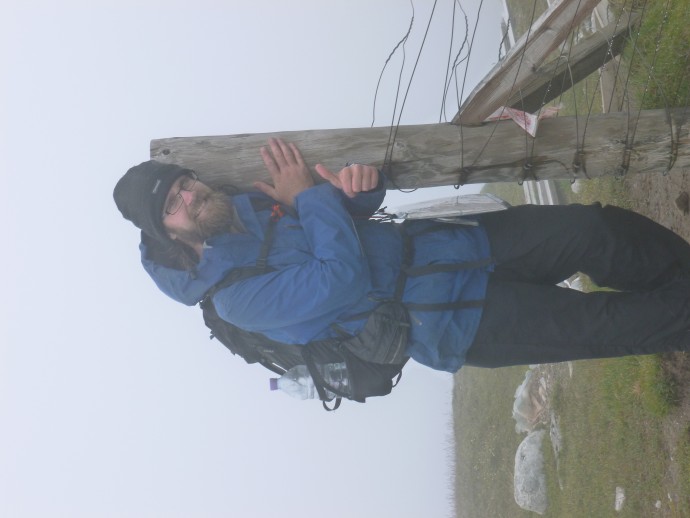 CaptainSlow showing his appreciation for the fence posts

Or at least what we thought was the summit. Having not reread our WalkHighlands route description well enough, we missed the bit where it says that the true summit is on the second of two ridges. After descending a little way from the false summit we came across a stream which did not exist on the part of the map where we thought we were. We soon worked out our mistake and followed back up the stream until we reached the true summit and retook the customary summit photo. 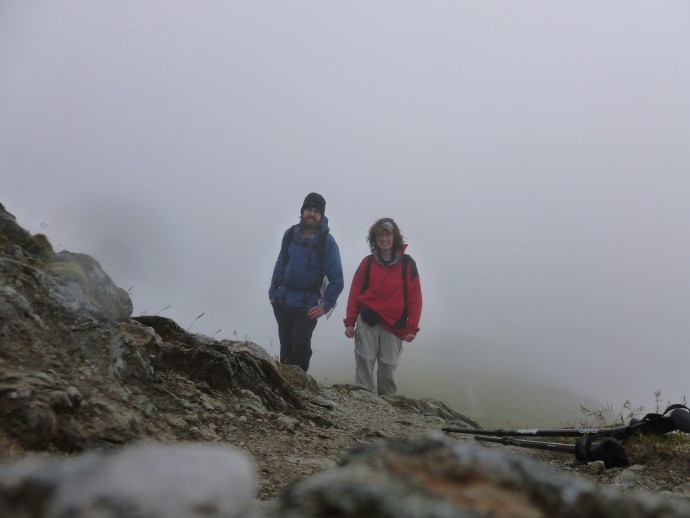 At the (true) second summit

Next up the biggest challenge of the day - the scramble up the side of An Stuc. We had heard that this was a bit tricky (particularly if you are not too fond of heights!) so we had resolved to have a look and make a decision as to whether or not we could manage it. In the end it turned out to be actually quite fun. We went up pretty slowly but with not too much trouble at all. A great feeling of euphoria when we reached the top, and as we were not feeling too tired at that point (much to my surprise) we decided to continue on to the mighty Ben Lawers. 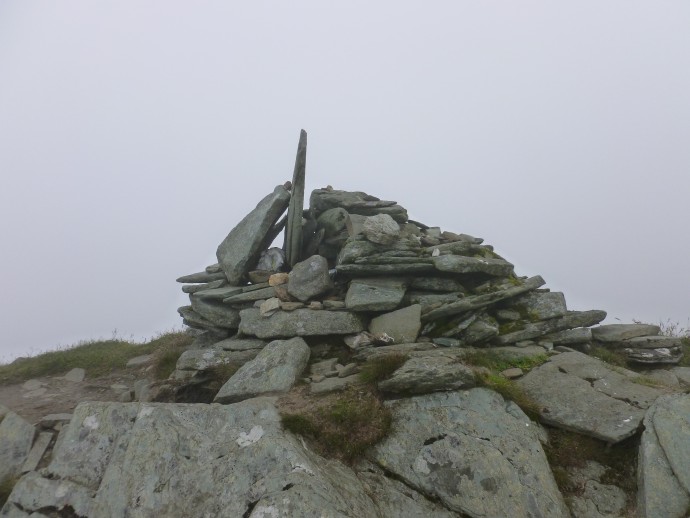 The biggest peak of the day but we were on a high at this point. We didn’t come across many people on the way up but the top was crowded with people who had come up the other way from the Ben Lawers car park. As with the previous three we had no views from the top so made it only a quick stop before making our way down the main path and on to the last peak of the day Beinn Ghlas. 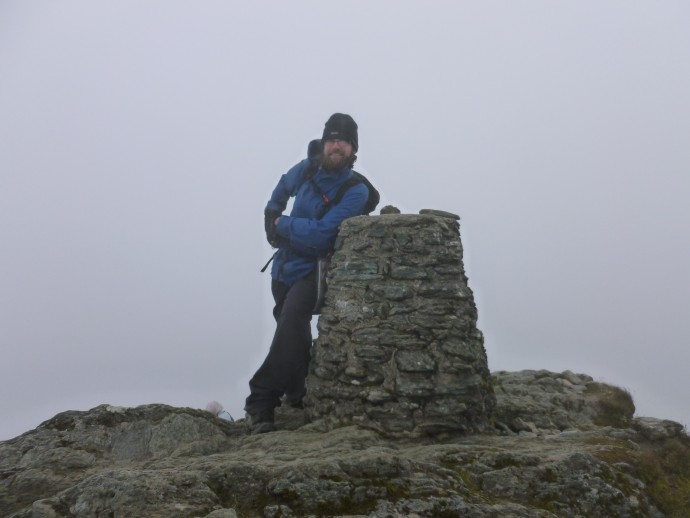 By now I was feeling invincible and charged up the first part of the ascent only to lose steam and finally make it to the top at a more gentile pace. And lo and behold the clouds lifted for a brief while

! Ben Lawers was still covered but we were able to get some nice views over Loch Tay and towards the west. 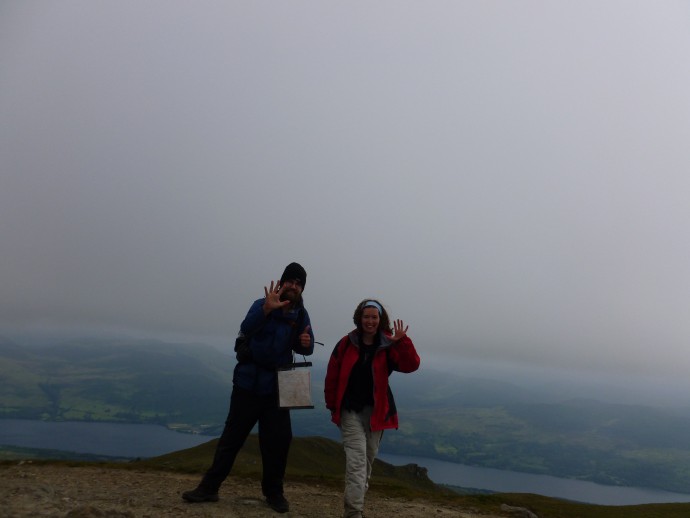 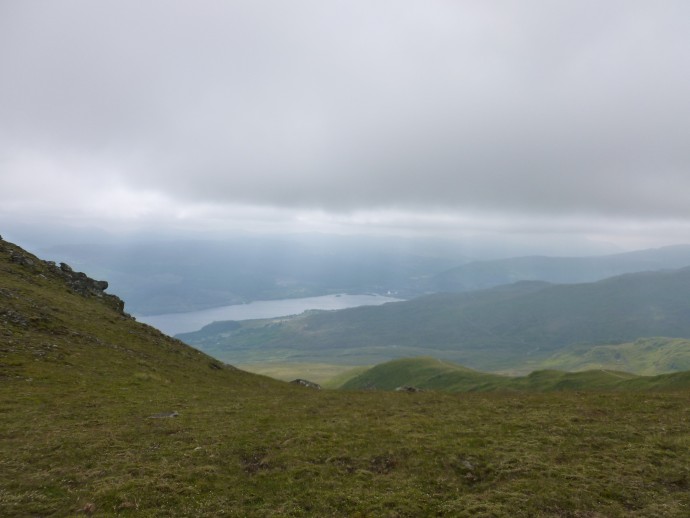 And finally a view again

For the descent we went south east off of Beinn Ghlas heading for the stream and the tiny dam. From there we were able to pick up a land rover track and follow it back parallel to the road. As we went along the clouds lifted further and more and more of our day’s route became visible. We finished off by joining the path we came in on and heading back through the forested area to the road and the hotel. Finally a nice pub meal and off to the campsite to rest up before the next days walk.

Overall less tiring than I had anticipated shame about the lack of views but a really good day of walking. We conquered our fears about navigating in cloud and scrambling up An Stuc and had a fun time doing it

Meall_Garbh.gpx Open full screen  NB: Walkhighlands is not responsible for the accuracy of gpx files in users posts

Some of our non-hillwalking brethren might expect that the lack of a view until the final summit made this a bad day. Exactly the opposite is infact the case...we both had a tremendous feeling of satisfaction of successfully navigating in thick clag to-and climbing-five Munros in a day.

Add to that the scramble up an Stuc which actually seemed pretty simple and the day was a very good one!

. I did the lot from the visitors car park and the walk back was torture.

Well done , that's a big round , sounds like a great day with a bit of scrambling and some testing navigation , good stuff

you should've came down to the road and hitched

Well done, it's a great day out that one