I’ll apologise now for my over-enthusiasm and melodrama, in this my first trip report, for what is essentially just a very short up and down to the summit but for me it was a big milestone, and I loved every minute of it

Things hadn’t exactly gone to plan since the turn of the year when I first announced to my wife Rachel that I fancied climbing a few Munro’s this year. We’d already completed a handful prior to this on our last trip to Scotland but only as they were near to where we were staying and we fancied seeing what the views were like from up there. Now I’d discovered there was an official list to tick off a strange compulsion drove me to trying a few more. So several months of studying maps and other trip reports on here ensued, holidays were arranged with work and our accommodation sorted and I was all prepared to start delving into this world of “Bagging.” Then a month before our first trip at Easter in The Trossachs, an innocuous twist left me with a displaced vertebrate, totally knackering my sciatic nerve and most of the sensation from the knee down in my right leg. We still enjoyed our holiday but were limited to low level walking with me swinging my numb leg around akin to the actor John Thaw (Hopefully it’s not just me ignoring the plot of Inspector Morse re-runs as I’m too busy staring at his dodgy gait

Thanks largely to my Physiotherapist and with feeling returning gradually down my leg we optimistically headed north again in Jubilee week to attempt some of the hills around Crianlarich and Bridge of Orchy, with a spot of wild camping thrown in. The camping was great but the leg was still causing me enough grief, continuously cramping up and affecting my balance, whilst over-compensating on my good leg was causing an old knee injury to flare up in that leg. Alas I had to admit defeat and return early with my tail between my legs and several failed attempts to my name.

With a cottage in Perthshire already booked for August and two more months of healing under my belt I was feeling a little more positive but still apprehensive as we set off from our home in Worcestershire at 6am and headed up the motorway towards our intended target for the day; Meall nan Tarmachan. With the high start and the short distance to the summit it would be the perfect hill to see how my leg would react. Besides it was also en-route to the cottage. Well by the scenic route continuing through Glen Lyon it would be

. Our recently acquired rescue dog Corby would also be joining us this time on holiday and needed tiring out before reaching the cottage. The whole temptation of chewing someone else’s home may have otherwise became too overwhelming for him. 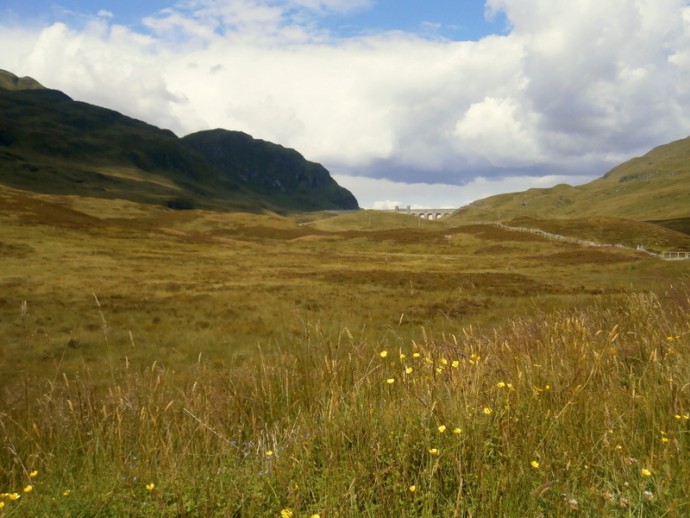 Despite passing numerous heavy rain and impending flood warning signs on our way up we arrived at the second smaller car park past the NTS Ben Lawers one at 1.30pm in glorious sunshine (which the photos don't really show.) We quickly got our gear together and headed off through the gate before branching right off the track at the cairn and heading west up the gentle slopes. Already the views were opening up with Ben More and Stob Binnein dominating the skyline in one direction and Beinn Ghlas and Meall Corranaich just a short hop over the road to the other. We hadn’t been walking long before rumbling stomachs reminded us it was lunchtime and we decided to just sit down and soak in the sunshine and views for a while. 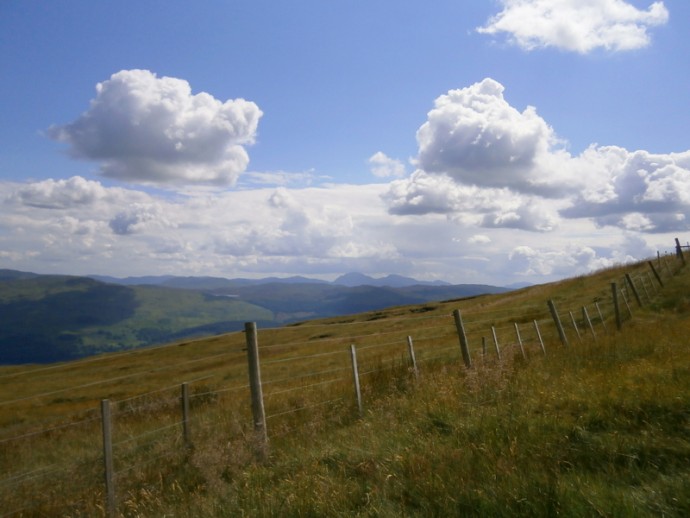 Ben More & Stob Binnein on the horizon (correct me if i'm wrong please?) 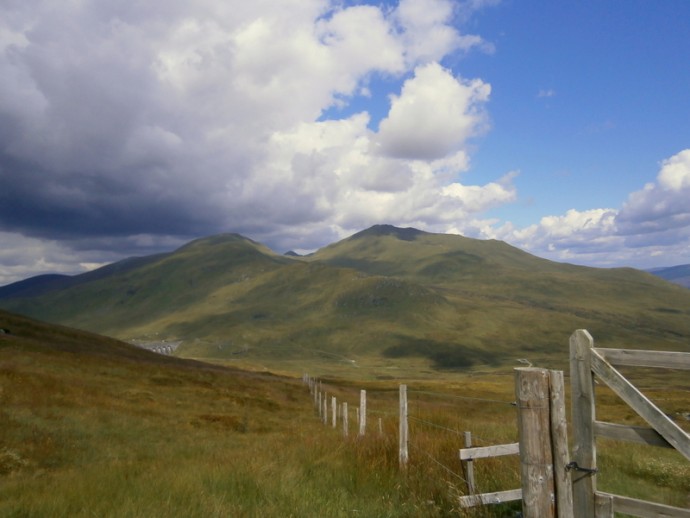 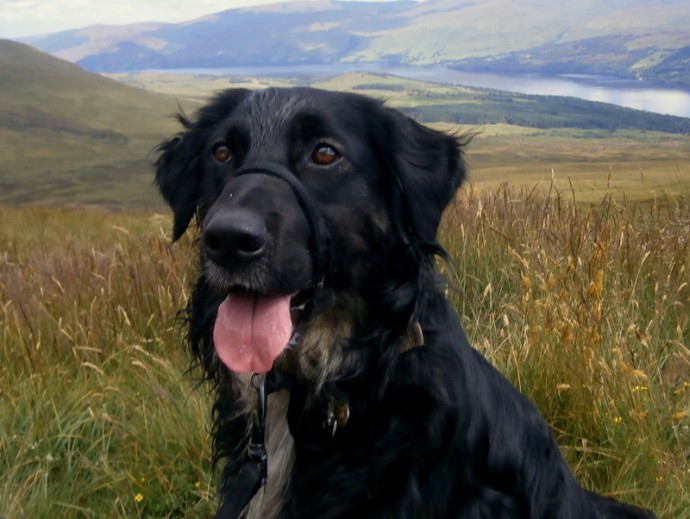 Corby posing for a bribe of sausage roll.

From our lunch break the undulating slopes gradually steepened and the going got a little tougher as I began to huff and puff my way up the clear path to the small cairn on the false summit. With little walking of any note over the last 5 months any degree of fitness levels I may have had were certainly lacking to say the least. Of course I blamed my dodgy leg convincing myself that a diet consisting largely of pie and cake was indeed conducive to hill-walking 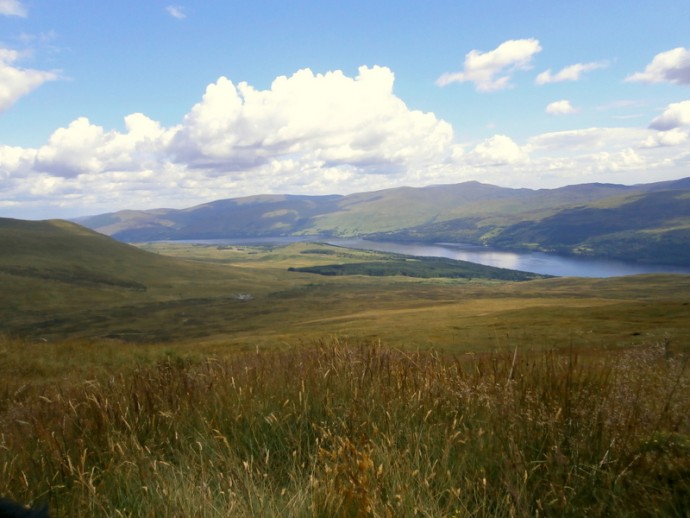 Looking back to Loch Tay

We were just approaching the first summit when the blazing sunshine was promptly dismissed and the heavens opened and gave us a proper soaking as if to remind us that we were in fact in Scotland and hadn’t taken a wrong turn on our journey here. Now to say we both err on the side of fair-weather walkers would be an understatement and this downpour brought an end to the walk for Rachel and Corby. Quite content with the views she’d had so far, and not a great believer in the need to reach the very top just to cross a name off a list, she decided her time would be better spent popping back into Killin to get those essential groceries that I’d forgotten to pack 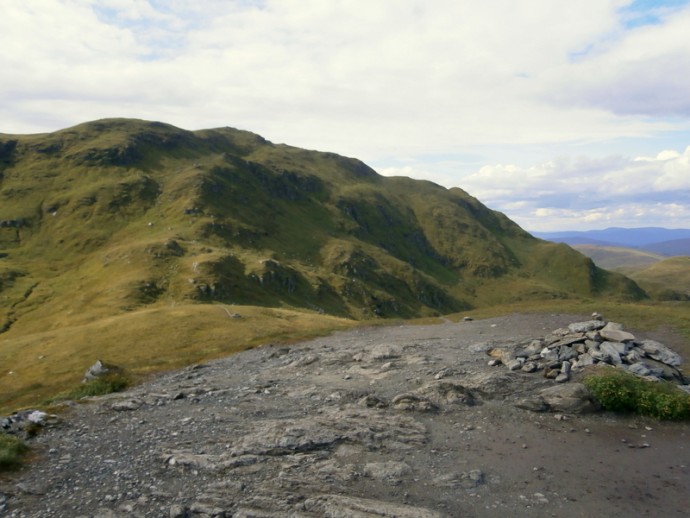 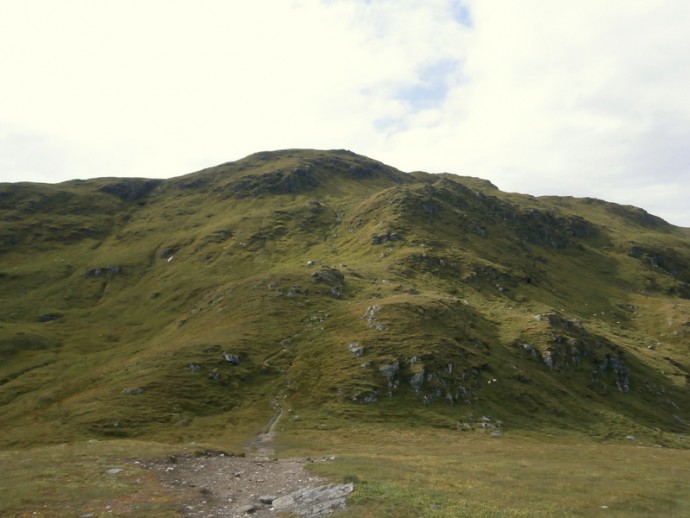 At the cairn the first thing you notice as you look down to the small drop ahead of you is the rather picturesque style and stepping stones over the marsh obviously placed here to detract the eye from the upcoming steep stair section that lies shortly in wait across the dip. I’ve got to admit the steepness of the stairs took me a little by surprise here. I’m not sure why but when I’d read that this was one of the easier Munro’s it threw me off guard a little as I watched another walker descending very tentatively down the now wet and slippery stairs toward me. Maybe in my hill-walking naivety I was expecting escalators or at least a hand rail

. Still they weren’t as bad as they looked from afar. After a few disgruntled bleats from the local sheep, that appeared to be mocking my every choice of step, I was soon rounding the bend at the T-junction to finally gain the summit. 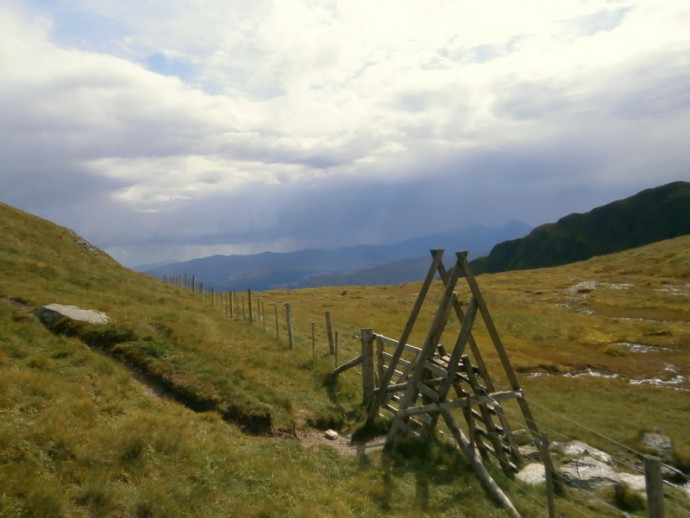 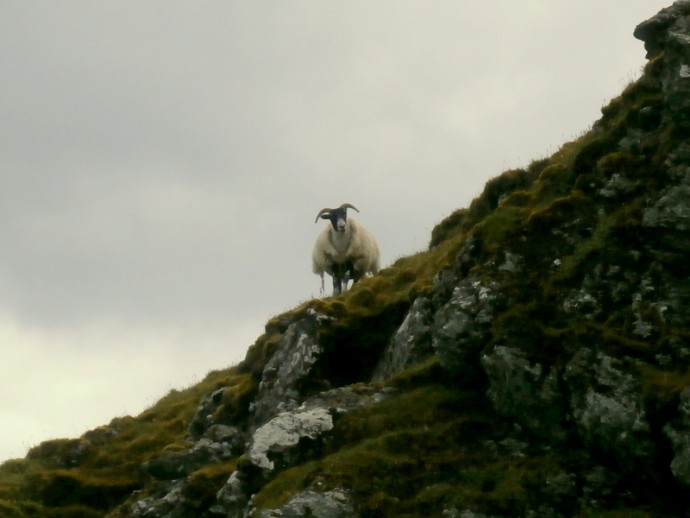 I’m glad I had the summit to myself as I just smiled inanely at the views and chuckled out loud. It had been over a year since my last Munro and just felt great to finally clock up another one after months of sulking around the house. For a brief moment I pondered the ridge walk back down as it lay out tantalisingly before me but sensibly decided to keep it short and simple for today. “Always good to have a reason to come back” - I’ve read on here so many times I thought to myself. So I settled for just enjoying the views and rewarded myself with a few quick swigs of “Leg medicine”, sponsored today by a fine Macallan. All too soon I was off back down the stairs and over the slopes, with the entire route to the car park clearly visible below me, still beaming and now with a new found spring in my step. 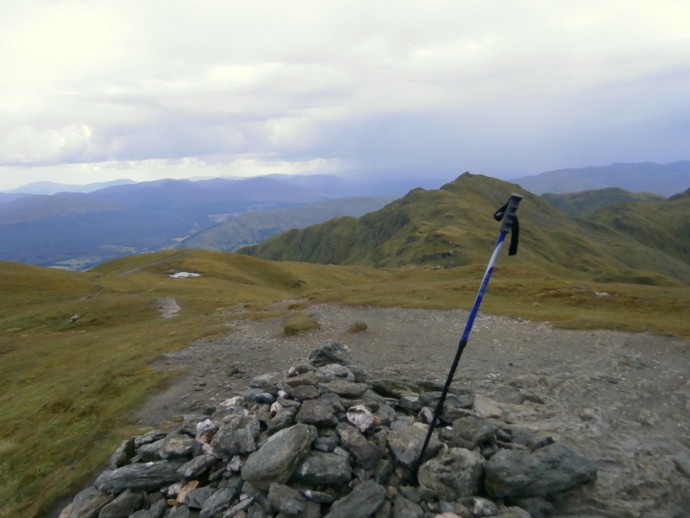 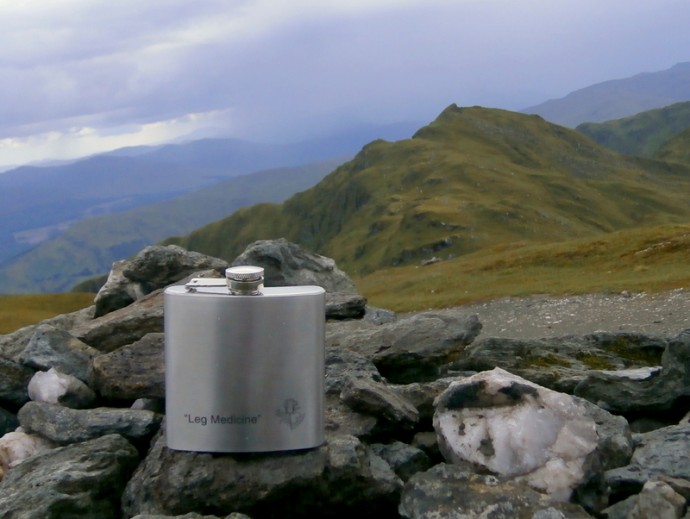 About half way down the skies had started to brighten again and I was immediately joined on my descent by a flock of “Little-brown-Jobby” birds that sang and danced around in front of me for what seemed like ages. Maybe I over did the whiskey at the summit but the scene reminded me of something out of a Disney film as I imagined they were trying to talk to me. If it weren’t for the fear of falling trying to coordinate my dodgy leg I could have easily broken out into a full on skip at this point. . . Ahem! . . . Quickly getting a grip on my fleeting daydream into Bambi-Land I realised the birds were probably just telling me politely go and fornicate away from their land and despite the apparent solitude there may be other walkers, or worse, more judgemental sheep watching

Then that was it. I was back at the car park in no time just as Rachel returned from Killin. Now laden with shopping and treats and we were off to our find our home for the week, rest up and wait for any reaction in the leg and maybe start deciding upon tomorrows walk. Little did we realise then that the fair-weather walking god was going to be smiling on us for the rest of the week and this was just the short prelude to some fantastic days walking.

Re: Making a Meal of Meall nan Tarmachan

Congrats for getting back out there

charliebloke1 wrote:Despite passing numerous heavy rain and impending flood warning signs on our way up we arrived at the second smaller car park past the NTS Ben Lawers one at 1.30pm in glorious sunshine