Never been out in the Cairngorms before (apart from boarding down Cairn Gorm in the winter) so as soon as the weather said it was going to be a cracking day raced up the A9 from Glasgow.

Parked in the main car park at the Ski Centre. Walk up the steps to the side of the car park (almost everyone was walking this way) and follow the well maintained paths. After about 15 minutes you will cross Allt Coire an t-Sneachda. Just after this there is a fork in the path. Take the right hand fork and keep on trucking up the gentle slope. You will come across another fork in the path and again take the right hand path. By doing this you are avoiding going into Coire an Lochain and instead walking up the western side of it. It does get quite steep here but nothing too strenuous. You get good views of the cliffs of Cairn Lochan. 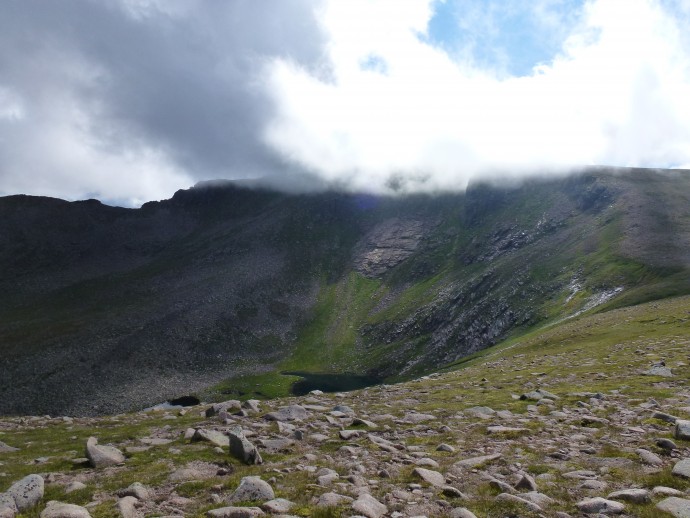 Keep on following the obvious path but head in a southern direction. Do not take the path that turns off to the left and heads up hill as this takes you to the summit of Cairn Lochan. You'll lose view of what's in front of you until you pop round the corner of the small rise on the map (marked 1083m). From here you will see you are walking along the eastern top of Lairig Ghru with amazing views to Braeriach, The Angel's Peak and Cairn Toul. Once you pop round the side of Cairn Lochan you will see the summit of Ben Macdui which I have to admit for the 2nd highest mountain in Scotland was a bit disappointing. Keep following the path all the way to the summit on the right hand side of the two mounds. It's a big flat rocky summit but the views are good. Lots of little shelters have been built to give you a bit of shelter to get some lunch. I spent about 30mins here eating and chatting to a fellow walker. He was heading over to Cairn Gorm but as I'd made the summit of Ben Macdui quickly (took about 1 1/2 hours and was a pretty easy walk) I'd decided to add in Beinn Mheadhoin before doing Cairn Gorm. 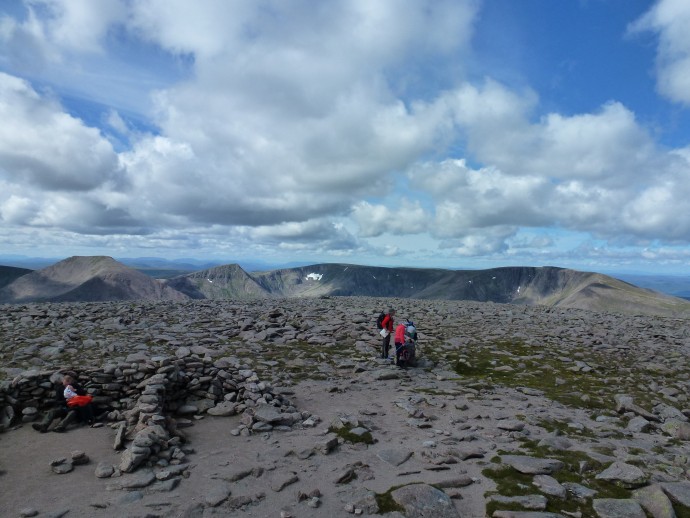 View from summit of Ben Macdui

It's hard to see another way off the summit because it is so flat. If you walk west from the summit cairn you will come across a ruin that is not visible from the summit. It is marked on the map. You pick up the path here and quickly lose altitude as you walk towards Loch Etchachan. Again the path is easy to follow and you start to see the stunning Northern Corries. 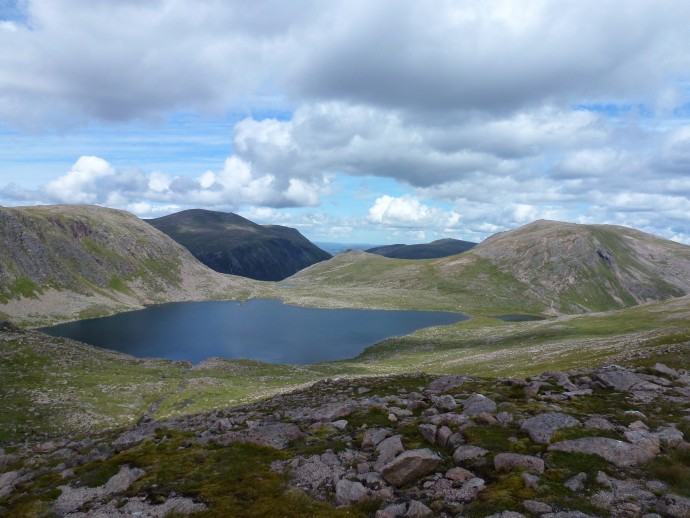 You will drop right down to the edge of Little Loch Etchachan and cross the Ford (don't fall in like I did.....) then immediately start up the side of Beinn Mheadhoin. This is a lot steeper than it looks on the map and took it out of me. After a couple of 100m it flattens out and you can see the Barns of Beinn Mheadhoin. Aim for the largest on the right as this is the true summit. You have to climb up this granite crag but it is pretty easy from the back of it as you see it in this photo. The guide I was following said to retrace my steps back to the Loch Etchachan then follow the path north to Loch Avon. I was also told by another walker that you could head north east from the summit of Beinn Mheadhoin to the far side of Loch Avon and assend Cairn Gorm from there. I cut down between the summit of Beinn Mheadhoin and Stacan Dubha and rejoined the path between Loch Etchachan and Loch Avon. Again follow the easy path and drop down to the western edge of Loch Avon. Before you get to the banks of the loch where this picture was taken make sure you have taken a note of where the path goes. You lose it in the rocks and plants and I had to direct another walker in the right direction. The path is quite difficult to follow here and I was pretty much picking out footprints in the mud. As it climbs up from the loch it becomes more obvious. You then cross Allt Coire Ralbeirt and the path climbs steeply up the side of the waterfall. At points the path is no more than a foot wide, wet, slippy and a fall here would be pretty serious. Great care is needed until it widens out. It is VERY steep here and after two munros this sapped my energy. It flattens out and follow the path and Allt all the way to the path that joins Cairn Gorm to Stob Coire an t-Sneachda. At the fork turn right and follow the path towards the summit of Cairn Gorm. 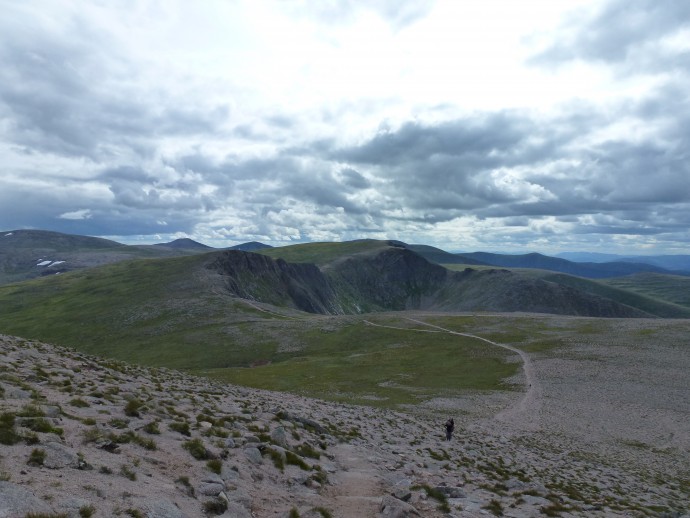 This wasn't as steep but my legs were done so this was quite a struggle. Made the summit and was rewarded with stunning views down to Aviemore and Loch Morlich. 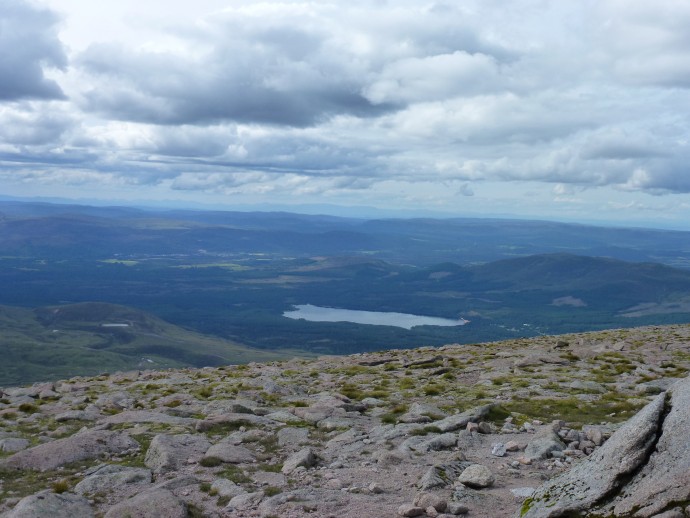 View from summit of Cairn Gorm

From here there is a line of cairns to follow which leads you to a brick path which guides the tourists from the top train station to the summit. This is the most uncomfortable path I have ever walked on and I quickly moved to the side to softer ground. At the Ptarmigan station walk round to the right and follow a new looking red ash path all the way back to the car park. This avoids the worst of the ski resort.

All in all an amazing day in the Cairngorms and I'd highly recommend adding in Beinn Mheadhoin to the walk as if you miss it out you will have to come back and pretty much climb up and over Cairn Gorm again to go get it. Bit of a waste of effort in my mind and the scenery walking from Ben Macdui to Beinn Mheadhoin and up the back of Cairn Gorm is too good to miss out.

Loving those photos and views you got. I'm reading this in my car in Bristol during my lunch break wishing I was there. Must get back that way soon.

Yep,good report and pics J888ohn.I still have to explore this area and it looks a good route to get started.

The Loch Avon and Glen Avon photo is a cracker...

Good report John. Loved the photos. I suppose Ben Macdui looks much nicer in the snow

Love The Cairngorms and Loch Etchachan truly is a hidden gem .Great photos!

I did a similar route yesterday. After reaching the summit of Cairngorm in just over an hour, and Ben Macdui in under 3, I decided to avoid the hoardes coming up behind me and cross over to Mheadhoin, which is so like Dartmoor with those tors! The walk across past Loch Etchachan is probably the most enjoyable I've done this year. I then dropped down to the east of Loch Avon (the path up from here to the saddle is hell) and climbed around the back of Cairngorm to the Ptarmigan. 7 hours all in, nearly a mile of ascent and knackered at the end, but a fantastic day. Just a shame I had to be in work at 6 this morning!

Seriously tempted by the Braeriach / Cairn Toul circuit now, but I reckon that'll take quite a lot longer, so best not to do it before a 6am start at work!