I thought I'd tell you all of the time I volunteered to join a work party to renovate Shenavall bothy at beginning of May. The plan was to spend a few days there doing what I can.
On the day of travelling down the weather forecast showed that the following day Tuesday 1st May would have glorious sunshine. Oh dear, I came to work and not play. Damn.
On arrival at the Bothy I was the first there so made a cup of tea and done a tidy up. Later the organiser Peter arrived with a few others. Since this was my first time at a work party, Peter told me there was no rules. Stop, start, come and go as you please. This I took on board.
I started to demolish a wall and take in goods that had arrived by argocat. After dinner a couple of guys arrived with their dogs. The bothy was closed to outsiders but Peter decided they could stay. I got speaking to Mark and Adrian who told me of their plans of doing the Fisherfield 6. I was jealous but then remembered what Peter said earlier. I told Peter that I'd be joining Mark and Adrian on their big day. No problem he says. That was good to hear.
I started to pack for the day but only had my big rucksuck with me. That'll have to do and then managed to put some food together.
Next morning we woke up early to a beautiful day. After breakfast we set off to the river crossing. At 0720hrs we were crossing the Abhain Srath na Sealga aiming for the north west face of Beinn a' Chlaidheimh. From the bothy it looks quite impregnable but I was told there is a route up. We set off across the strath which was quite dry and soon the climbing started. The 2 labradors were excited running around in anticipation of a big day out. We gained height fast. Every so often stopping to have a look round and maybe a photo. That was my excuse for taking a breather. The views by now were outstanding in the clear morning sun. An Teallach looked fantastic standing high and proud to the north. 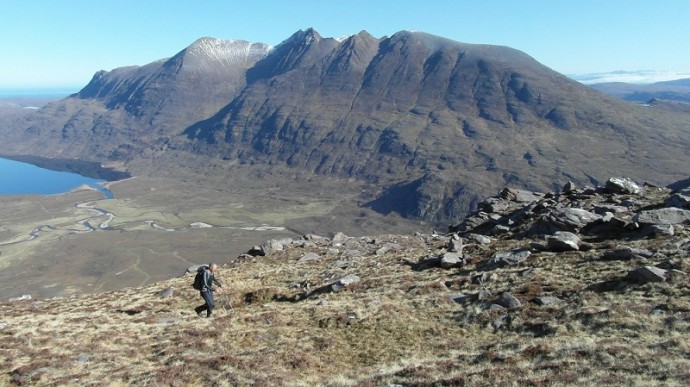 Mark with a clear An Teallach

Luckily we were in the shade for the big climb, no doubt this kept the sweat levels down. The path was steep and relentless as we skirted around the rock crags. Later it lessened off and now we could walk without huffing and puffing. We were now in the sunshine, feeling good that the summit was not far away. There was not a cloud to be seen. Our onward walk was clearly seen ahead. 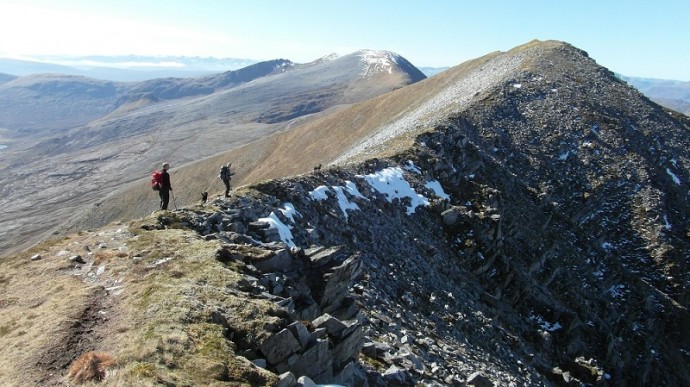 On the ridge at last

A bit of undulating walk took us to the 916m summit. That was 3 hours of hard work . The worst thing is it's not even a Munro. All that work for nothing. After a resurvey recently it didn't quite make the mark. We can still pretend though. We had a short stop for photo and nibbles before we set off along the ridge line with it's magnificient drops to our right.
Down to the Am Briseadh bealach with it's lochans and then we hit the extended stone boulder field for the long pull up Sgurr Ban. The dogs made easy work of it but we took it more slowly. It was relentless as we forever looked at our feet picking out an easy line to ascend. This was not the place to get a leg or ankle injury. 2 hours after leaving our non Munro we hit the summit. It was now after midday. At this rate I didn't think we'd get the six done but said nothing. It was not my call. We took a few photos at the cairn with the dogs. Mark and Adrian with their dogs

This was my first time walking with dogs. They were good company and friendly. Oh how I wished I could have taken one home.

Dropping south from Sgurr Ban to the bealach we could see a track leading up the north face of Mullach Coire Mhic Fhearchair. It took us an hour to reach it's summit at 1019metres. Here we would stop, have lunch and enjoy a rest. Time for lunch and rest

It's been 6 hours since we left the bothy. The sun was warm. We were on top of the world admiring all that we could see. This was heaven and there was not another soul to be seen. I wish we could get more days like this in Scotland. Then I wouldn't have to travel abroad so often. Scotland has some of the finest landscapes around but sometimes we just don't see it.

Dropping down south we came to the bealach at the foot of Meall Garbh, a 851m peak where a bypass path takes you to the Bealach Odhar.
From here a 200m easy ascent takes you to the Beinn Tarsuinn summit. One of the dogs was with me, at the cairn looking down to see if his master is coming. I do like that photo. Our ridge walk behind me with AnTeallach to the left

Once we all arrived decisions had to be made about continuing to do the other 2 or cutting it short here. The time was 1530hrs. Adrian was up to do the other two while Mark was a fair bit slower. I was happy either way. It was decided we'd call it a day. There is still the long walk back though. We continued until we came to the flat area of rock which some call the tennis court. To me, I'd call it Table Mountain as it reminds me of it's namesake in Capetown which I've hiked on a couple of times. At it's west end we dropped down into the north corrie, a bit steeply at first and with no path we made our own line trying to pick out grassy areas for a quicker descent. Beinn Tarsuinn left and "Table Mountain" at centre of picture

At this time Mark was at the rear so I decided to walk with him as his mate Adrian was trailblazing ahead.

As we talked he mentioned that a few years ago he was rowing across the Atlantic from Canada to Falmouth with 3 others to break the West / East record which had held for 108 years. That's 2100 miles. I listened with interest as this was not the usual thing you'd hear when hiking the hills. They were on course to do this until a force 11 storm hit them 370 miles of Isles of Scilly with a rogue wave smashing their boat ( Pink Lady, named after the apple ) in two. They clung on to their life raft for 6 hours till they were rescued by a Danish ship. Luckily no -one was injured but it could have been a close call. Mark saw his life flash by as he waited to be rescued and vowed not to do this again as being married with family it was too much of a risk.
Wow, what a story to hear. I'm glad things worked out OK in the end but it could have been oh so different.

This talk made our time go by quickly as we kept on descending down the rough ground. Every so often we came across a path, we'd use it and then somehow lose it. Soon we were in the lower part of Gleann na Muice making our way to the Abhain Gleann na Muice to find a suitable crossing point. Once done it wasn't long till we came to the good path which joins up with the path from Gleann na Muice Beag.
All the way down the majestic An Teallach stood ahead in glorious sunshine getting slowly closer and larger as we kept on descending. At Larachantivore we crossed the river trying not to get wet feet. Then across the flat but not too boggy ground to the river we'd crossed earlier that day, all of 12 hours ago.
What a relief to walk into the bothy at 7pm to find mince and tatties waiting for me. To be followed by cake and custard. A dream combination.
I thanked Mark and Adrian as we drunk some whisky for their company and for an excellent day out.

The next day the weather was also good but I worked on painting the bothy woodwork and fetching a large pane of safety glass from Achneigie. 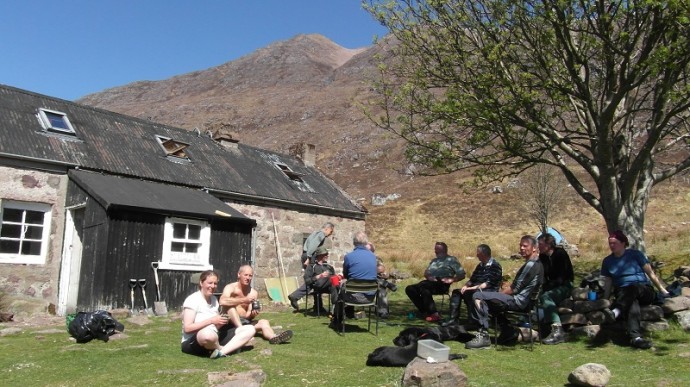 Mark and Adrian stayed for another day and did some joinery work and guttering. I bet they never imagined doing that as they left their car at Corrie Hallie.

Great report! That's what it's all about

well done! Combining your activities and taking active involvement with the local estate if you get the chance, fantastic!

Thanks for volunteering time to upkeep a bothy!

Re: 4 out of 6 Fisherfields ain't bad

Thanks for the replies.
It was good to spend some time doing up the bothy. Shenavall is very busy at times so the larger lounge and extra sleeping quarters would be appreciated by all and also allows more comfort. It also helped that the weather was glorious. The volunteers came from all over. One even from Germany. It was all so friendly. I hope others will take the opportunity to do likewise.

Was in the bothy at the weekend,sterling work you all did,its a stunning area Fisherfield,only managed 2,can I correct you on one small thing,Beinn "a Chalidhemih is still a munro as it stands.

I was up there myself at the weekend with gammy

One of our party had the same amount of stuff on his back which is similar to your last pic, eh Jonny

can I correct you on one small thing,Beinn "a Chalidhemih is still a munro as it stands.

That's good news. That steep climb now seems worth it.

Well done Charlie, great work. Its great that we have so many people doing their bit to help repair our bothies, so others can benefit and enjoy these facilities.

excellent report Trecker. Some great photos and well done on being part of the repair party.

Thanks Trekker - I have just come across this - and thanks again for your work.
You can see what the good man did on -
http://www.youtube.com/watch?v=bL4XT23osNk

I have just been in for an inspection after the Winter, and it was all in good order
( and I had another spot of good weather, but then I did choose it )

Wow, what fabulous weather we had, The M.O.s dream

Glad that you appreciated "day off". It does seem to work

Now old-aged and gamey-legged, I have transferred to an easier to get to bothy. But not with this scenery 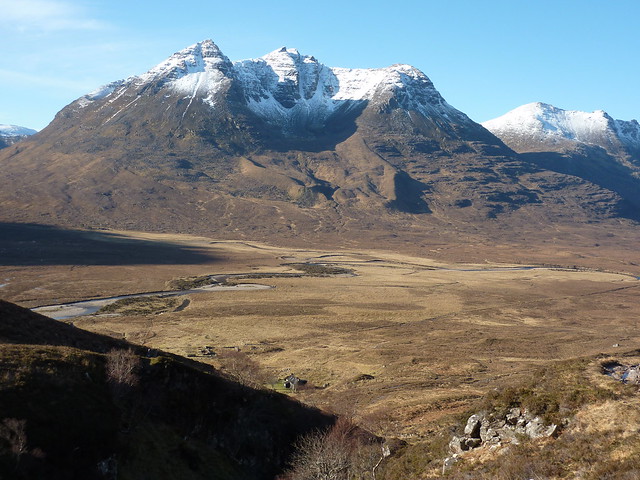