Finally a sunny day this summer, and a terrific short circuit of the rocky peaks of the Southern Fells.

crinkles.gpx Open full screen  NB: Walkhighlands is not responsible for the accuracy of gpx files in users posts
From Great Langdale, the path up and over Pike of Blisco is beautifully made – rock steps embedded into the fellside and making quite short work of what must previously have been a steep and breathless climb over damp terrain. Spectacular views of the Langdale Pikes all the way and a great walk to the satisfyingly rocky summit. Pike of Blisco over Kettle Crag Cold Pike afterwards might be a thin smear of meat paste between the pain Poilâne of the other two peaks, but it’s quite good to leave the broad paths for a short while and head pathlessly up the grassy slopes to a hill that would be quite enough to be the day’s highlight in many parts of the country. Pretty hazy conditions today, but still outlines of the Coniston Fells to the south to see and an increasingly tempting view of the jagged top of Crinkle Crags to tempt you on. Back to Pike of Blisco From Cold Pike, the highway to Crinkle Crags

As the many walkers up there could attest, the mile traversing the seven-plus tops of Crinkle Crags and its neighbours is a constantly fascinating rocky walk – plenty of obstacles and half-scrambles, but most just the right side of awkward (to my slight shame, I had a good look at the ‘Bad Step’ and still just couldn’t see the moves needed, but the detour path west is a really good route). The unobstructed view of the Scafells from here is amazing too, giving England’s somewhat-maligned highest a real grandeur. Looking down into Great Cove South over Eskdale to the coast 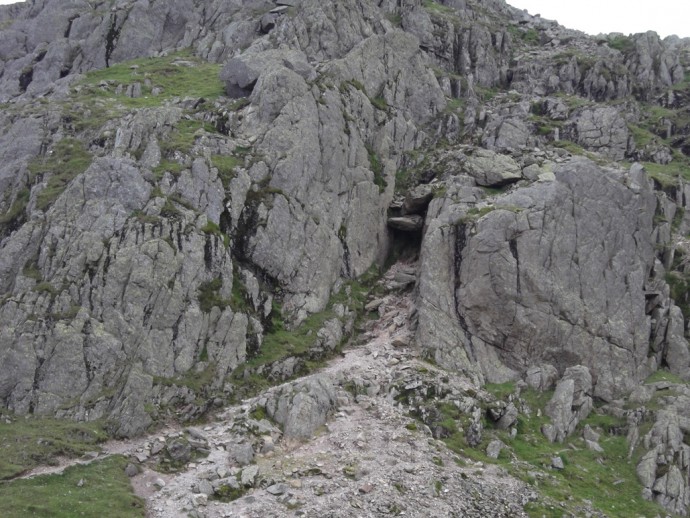 Over Cold Pike to the Coniston Fells Langdale Pikes over The Band The descent via The Band (time precluding an assault first on the scree path up Bowfell) - an obvious, almost-paved walkers’ highway, of the sort that the knees and fading concentration rather welcome at the end of a walk – is a relaxing one, with good open views to the fells around and verdant Great Langdale before. No great originality in recommending this circuit, I’m sure, but I’ll do it anyway! Simply a wonderful little walk. Up Mickleden to Rossett Pike Looked like a really good day out and I am going to have to remember this one and give it a go when I am next up in the Lakes - some brilliant pictures as well - really like the shot of Bowfell! Great report!

Looks like you had a good trip. Good photos - thanks!

When I did Pike O'Blisco back in January, the steps you mentioned were very dangerous. Cold Pike was fine, but it was a bit too late in the day to head up for Crinkle Crags in dense snow.

When I got back home I heard a walker had to be air-lifted after making a mistake on the Bad Step on Crinkle Crags that week. Not gone up-close to it yet, but will see if I can suss it out when I do.

Great report P, looks like you had almost perfect hiking weather too (as long as it wasn't too hot) Some great photos along the way which must have been beautiful to see in real life. Great hike

. I'd quite fancy doing Crinkle Crags again, and I still haven't done Pike o' Blisco. Looks like you managed to get off the hills before the haze went from average to extra thick.