It was the weekend of the WH Braemar meet and a chance to catch up with like-minded mountain folk. Leithy Suburbs had whipped us all into shape and even arranged some cracking weather

Walkaboot had suggested the Lairig Ghru as a wee warm up on the Friday - I was in and Corrie dog was too.

Thursday night and WA arrived at my house bearing gifts of not one, but two boxes of chocolates! And loadsa treats for Corrie. She can stay again

Plan was to drive to Braemar early on Friday, park at the Linn of Dee car park then taxi over the Lecht to start walking the Lairig Ghru from Coylumbridge by 9.30am. WA had booked a local taxi driver. Lovely chap. Very talkative!

I sat in the back with Corrie which meant I could feign listening as WA was interrogated on the benefits of the Commonwealth Games for Glasgow, amongst other things. The back seat came with doggy breath however, and the joys of a roller coaster ride over the Lecht. By the time we got to Coylumbridge one-and-a-half hours later, I was green!

Fortunately WA was keen for a caffeine shot so we headed into the nearest beverage seller for the most expensive cup of coffee ever. Worth every sip!

We eventually starting walking at a little before 11a.m. The sun was shining. The sky was blue. We had all day. 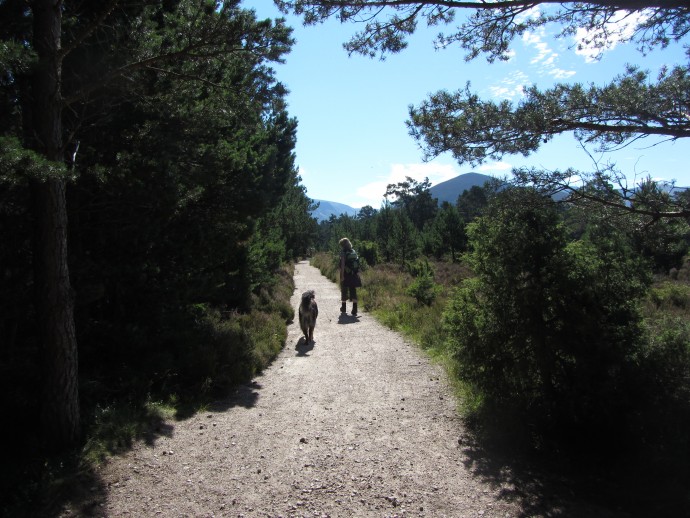 The best thing about the Lairig Ghru on a fine summer’s day is it simply requires one foot to be put in front of the other on the very decent path with no need to engage brain. It was hot though, and there was not a breath of wind so lots of excuses for pit stops to soak up the views and wipe sweaty brows. Not mine of course. 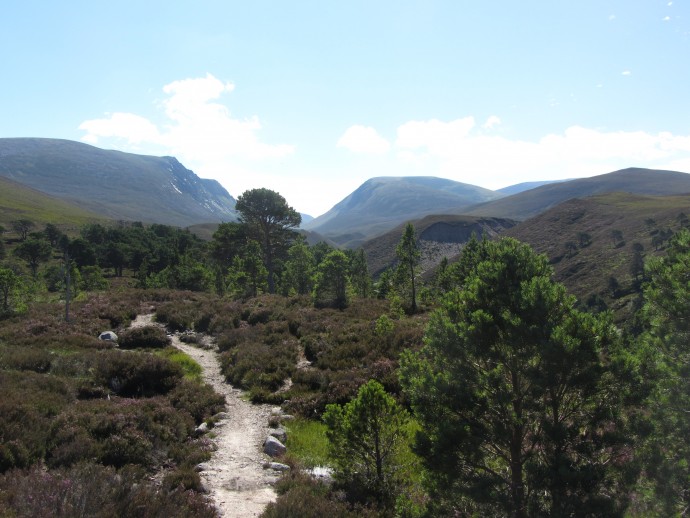 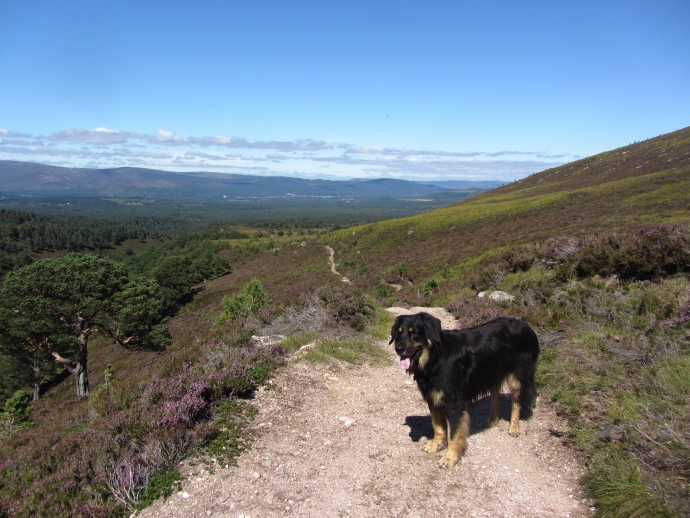 looking back to Aviemore 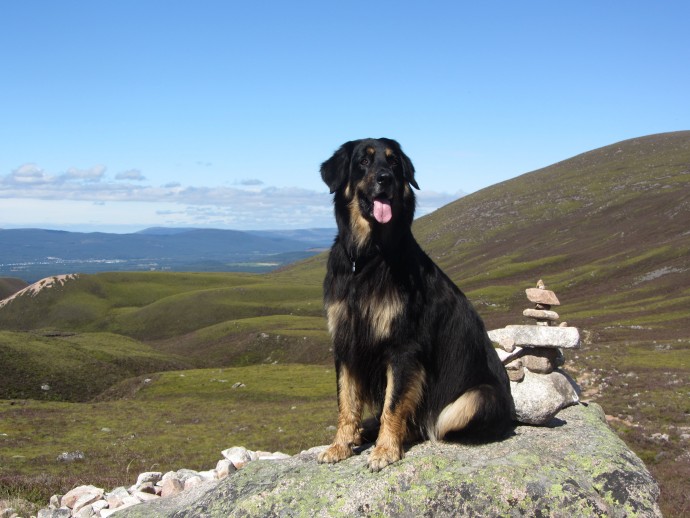 WA regaled us with stories of women who used to walk this way every day with eggs on their head. I was thinking the heat may have got to her but apparently there is some truth in this eggy tale (http://books.google.co.uk/books?id=yoVZWInM98cC&pg=PA291&lpg=PA291&dq=lairig+ghru+women+with+eggs )

We met a few other folk going the other way but for the most part we had the route to ourselves. There’s something very relaxing about meandering along a gentle mountain path in the sunshine, taking photos and chewing the fat about nothing in particular.

At around 11am, a helicopter approached and hurrah we thought, it’s WeeMisterMac (who lives hereabouts) with his promise of tea and scones! Excitement.

The copter carried on.

Persuading ourselves we didn’t want his smelly scones anyway

, we sauntered on past Braeriach and Ben MacDhui as the route reached its high point at 835m. This is not particularly obvious. There is no cairn or tea shop or anything. Just a sense of starting to go downhill again. 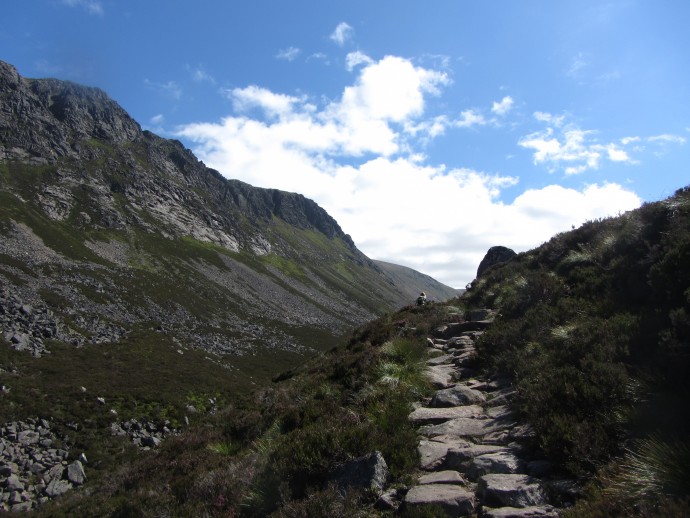 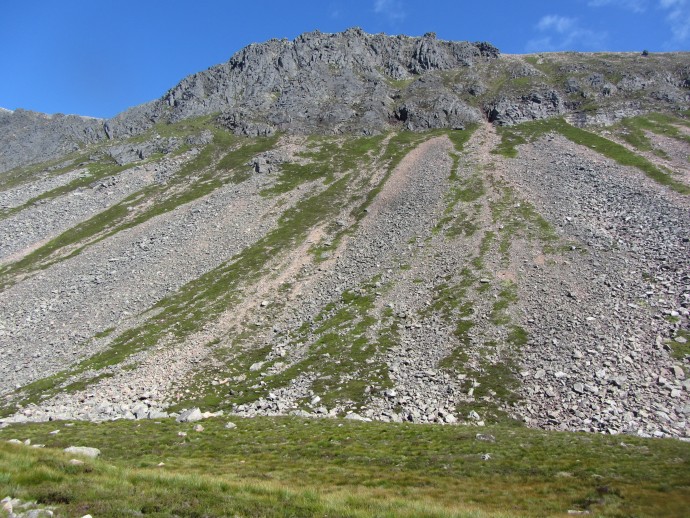 Ben MacDhui's up there somewhere 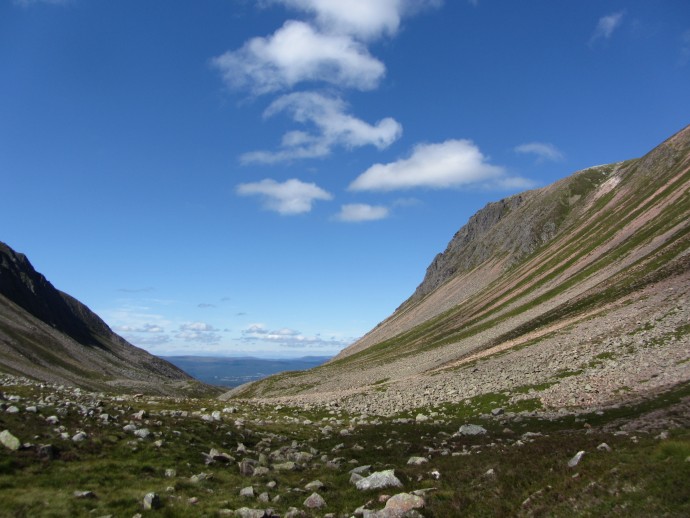 There is a wee section at this point where the path disappears at times in a mass of boulders but these are easy enough to cross, especially when dry. Gradually the views behind disappear to be replaced by expanding views to the front. 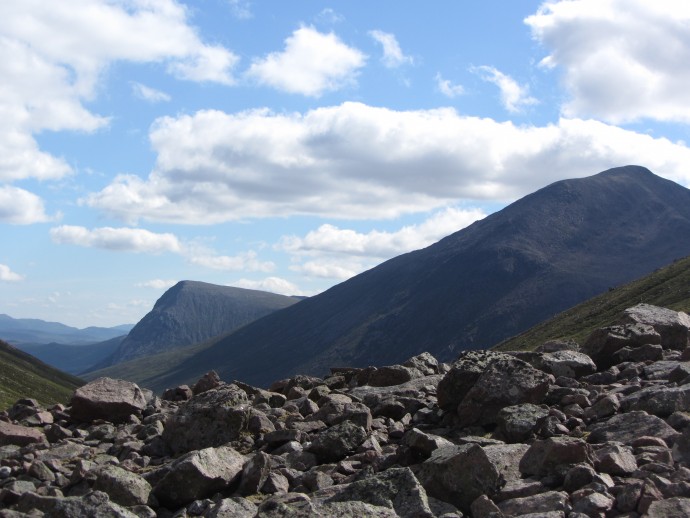 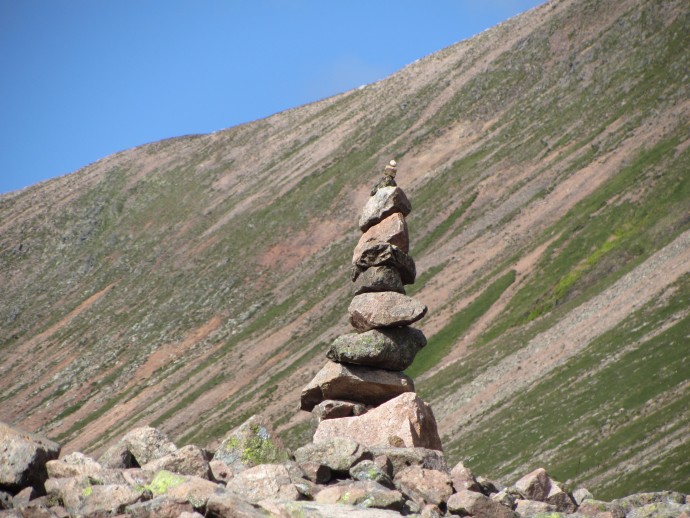 The Lairig Ghru is fortunately riddled with lots of streams and dog dipping pools so Corrie was well served with refreshments and cooling down opportunities. We paused at the Pools of Dee and took some photos. Then realised they weren’t the Pools of Dee after all! 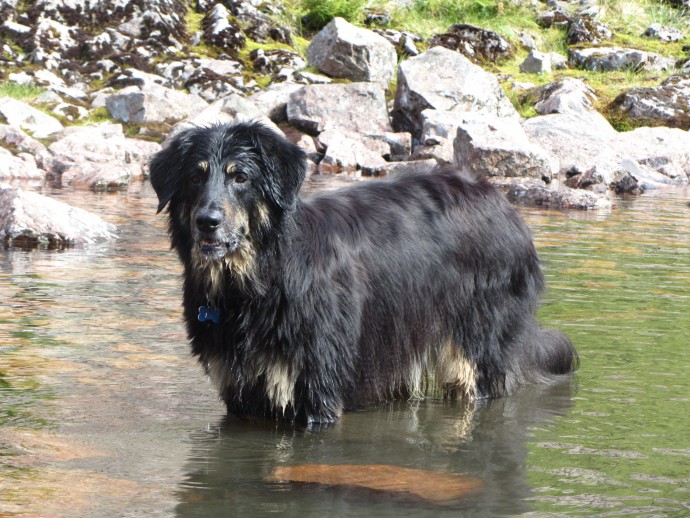 Corrie not in Pools of Dee :) 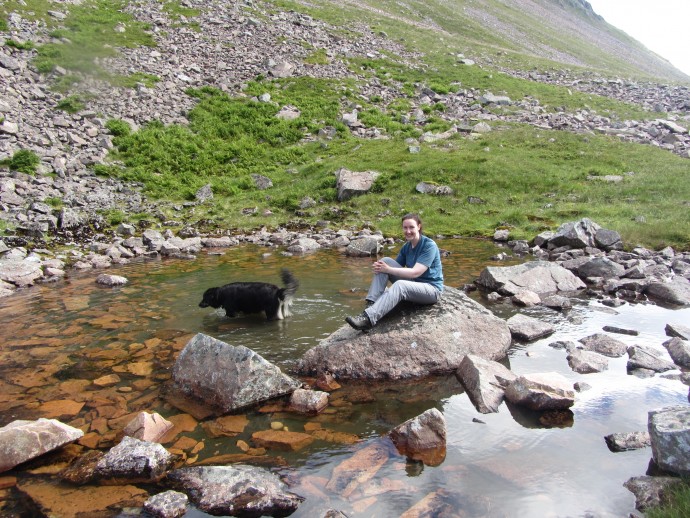 just sitting on a rock in "Pools of Dee"

But a wee bit further on…ah, this is more like it! 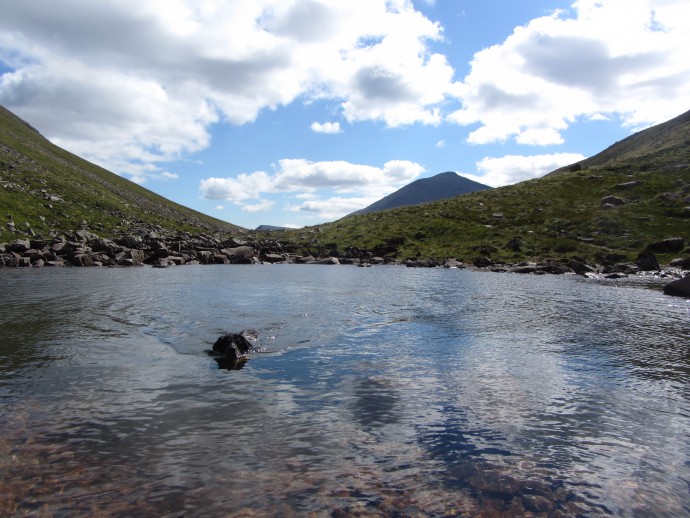 Corrie chilling in the Pools of Dee!

We then encountered a terrifying sight. A woman, doing a passable impression of a chicken having a poop, was lurking in the Pools of Dee in her underwear! Like the Grey Man of Macdhui, she disappeared as quickly as she arrived but I believe WA may have captured this mysterious creature on film. If she is not too traumatised, she may post a photo here.

Beyond the Pools, the route wanders gently down towards the magnificent Devil’s Point with Corrour bothy nestled closely underneath. DP winked at me. My last Cairngorm Munro. Should I stay or should I go? But it was late and a white pudding supper was calling. Another day DP. Perhaps I’ll keep you for my last Munro you lucky fella 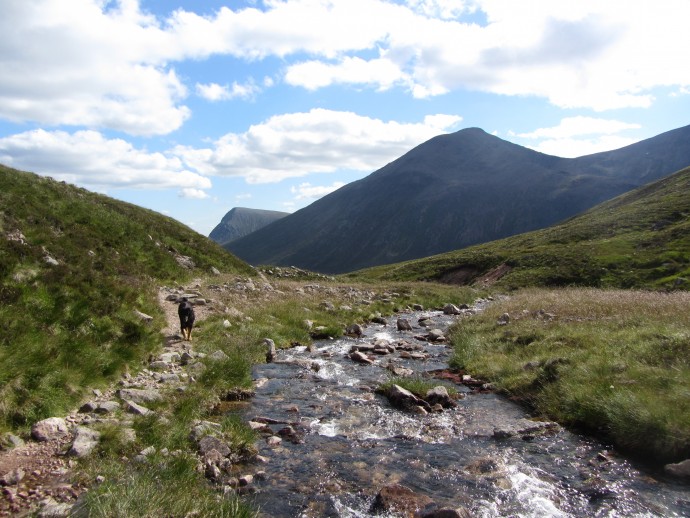 heading down to Corrour bothy 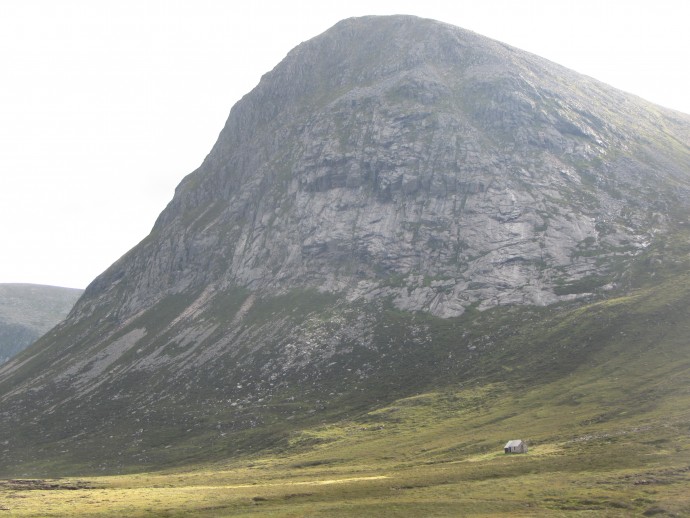 From there the path meanders down with the option of heading to Linn of Dee via Glen Dee to the White Bridge or following the WH route down Glen Luibeg. We chose the latter, and a very fine end to a classic route it is too. 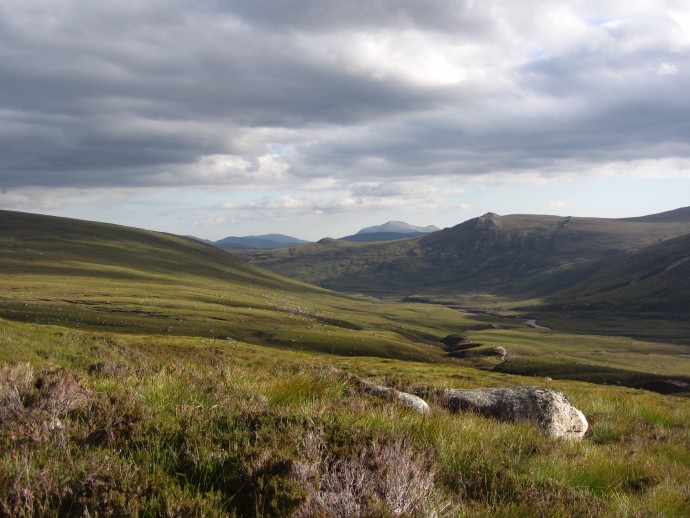 Dropping down into Glen Lui there is a footbridge a short distance up left from the path to cross the Luibeg Burn but we were feeling adventurous and continued down to head over an easy boulder hop. 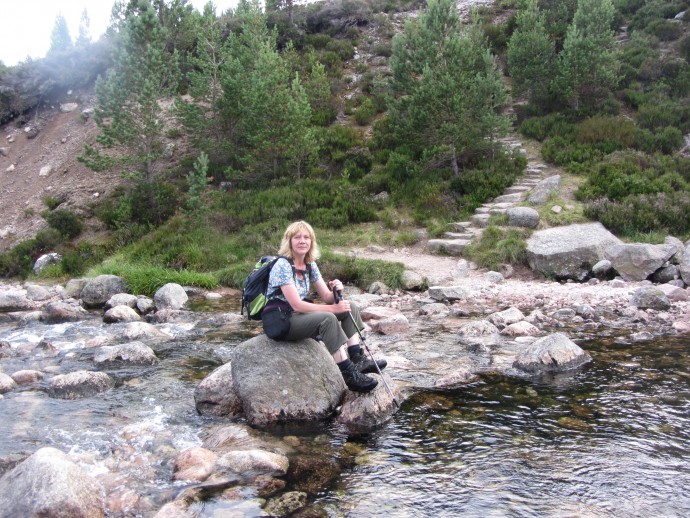 WA contemplating her next move

Then just a few more miles or so, dreaming of white pudding suppers and mugs of steaming hot tea before arriving back at the Linn of Dee car park around 9pm. It was a short drive down the road to Braemar but, alas, puddings of white were not to be as the chipper had turned into a curry house and their offering of fish and chips didn’t quite reach the mark

Depositing WA at the very smart Braemar Lodge bunkhouse, I headed to an even lovelier B&B next to St. Andrew’s Catholic Church – highly recommended, lovely host, and a yummy, full breakfast the next morning. This was followed by more coffee and cake with WA then a wee pootle up Glen Callater. I could get used to walking a la Walkaboot 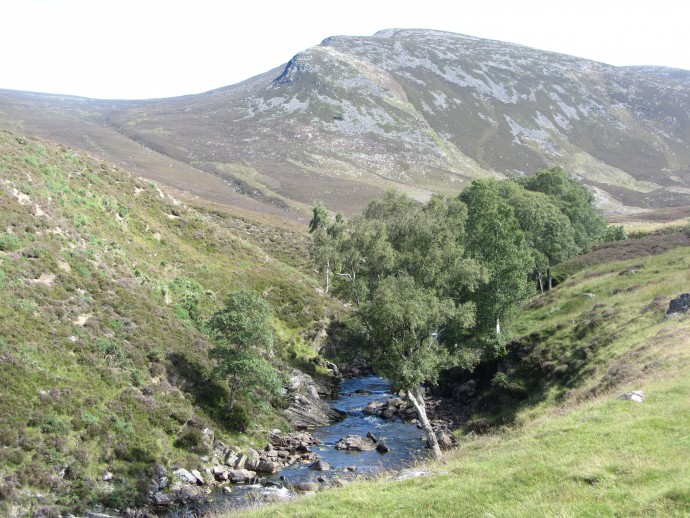 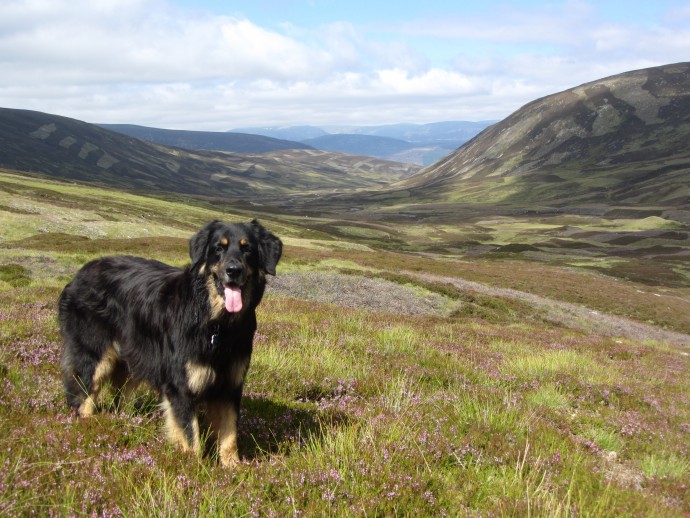 What a terrific trip report, mm, pretty much sums up the walk Corrie took us on

A woman walking about the Lairig Ghru in her knickers? Nope, sorry, didn't see her

A woman walking about the Lairig Ghru in her knickers? Nope, sorry, didn't see her

I've just checked out the eggs link and, yup, that's where I remember reading about it, it Seton Gordon's book about the Cairngorms

Interesting. I wonder if he mentions the mysterious chicken woman? Makes sense with all the eggs

SOLD, that is one of the best set of photos and TR of the Lairig Ghru I've ever seen. I've always wanted to do this , but even more so now.
But no chicken lady's please.
Who did you see about the weather!

fab pics and report, Really fancy this one day

Wish I had managed to spend more time with you at Braemar, what a fantastic weekend we all had!

Great report on the Lairig Ghru!

An excellent report M. Great photos and description of the route.

dogplodder wrote:That was a good read.... and your dog's a beauty!

Corrie loves to pose - there's usually a treat in it!

MarilynMunro wrote:SOLD, that is one of the best set of photos and TR of the Lairig Ghru I've ever seen. I've always wanted to do this , but even more so now.
But no chicken lady's please.
Who did you see about the weather!

Thanks MM. Definitely a route worth saving for a sunny day. Leithy Suburbs is your man to sort the weather

fab pics and report, Really fancy this one day

Thanks Alan. Yep, would recommend this one!

Thanks SJ. You'll need to have a word with Walk Aboot about part 2

Bod wrote:Wish I had managed to spend more time with you at Braemar, what a fantastic weekend we all had!

Cheers Bod. Sorry to miss you guys on Sat night. Was feeling a tad off colour

And I knew the answer to the reindeer question too!

Thanks Monty. Sorry you didn't make the meet. Was really looking forward to your one man show

You certaqinly got a fab day for it.. I dont think I have heard of anyone making tit through the larig ghru without getting a soaking before

I think I know the taxi driver you got.. (there are only 2 in the area!) A right blether isnt he!

Would love to do this one day so found your report and photos a great help, ta

Lucky you getting such nice weather, everyone says it's always blowing a hoolie, something to do with the pass being a bit of a wind tunnel