The route had been studied (well sort of) so we were prepared for a bog fest and a long walk out, but funny how on some days, even knowing it'll be a long day, I seem to walk even slower than normal

. The up side of that of course is more time to enjoy being in the mountains

We donned the skin so soft, braved the midges and set off from the car park past the Met Office weather station and along the bank of the Abhainn an Torrain Dubh where we were passed by a lovely looking border collie and her human – both going faster than the humans in our group. (The spaniels made the most of the slow pace by racing around the heather chasing down every interesting smell they found – but never catching its source, although they did send up a couple of groups of Ptarmigan

We followed a path along the north side of the Allt an Loch Sgeirich for a couple of kilometers (or so) before finding a suitable crossing place and heading up Creag Dhubh Fannaich. 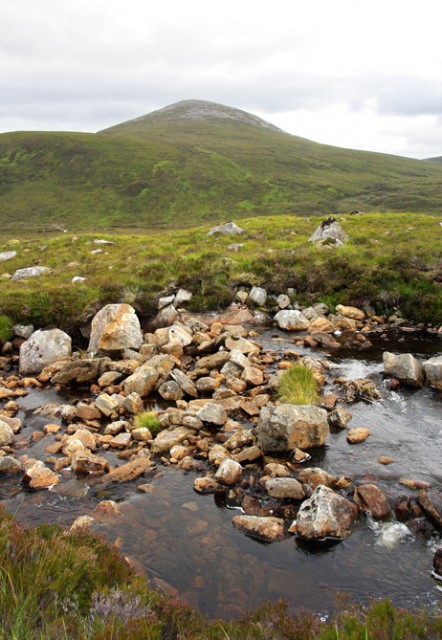 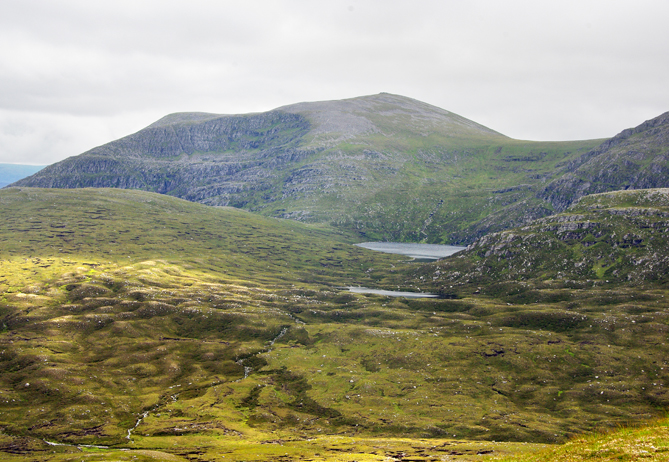 Looking towards An Coileachan - the last hill of the day

So far so good – lovely view point so stopped to take some more photos – then tragedy struck – I'd forgotten to check the camera batteries the previous night and they had decided enough was enough. So I now had to carry a rather heavy but useless camera and was left with only the phone for piccies – like an olympic athlete after a disappointing result I feel there are lessons to be learnt here The first hill of the day - Beinn Laith Mhor Fannich

The clouds of despondency that settled over me weren't helped by the clouds that were sitting on the peaks – where was our “95% chance of cloud free munros”?? To be fair the cloud cover did lift as we reached each summit but from Creag Dhubh Fannaich most of the peaks were covered. I suppose 95% chance of cloud free munros could mean 5% chance of being in the clag all day or, as it turned out, being in the clag of 5% of the day. 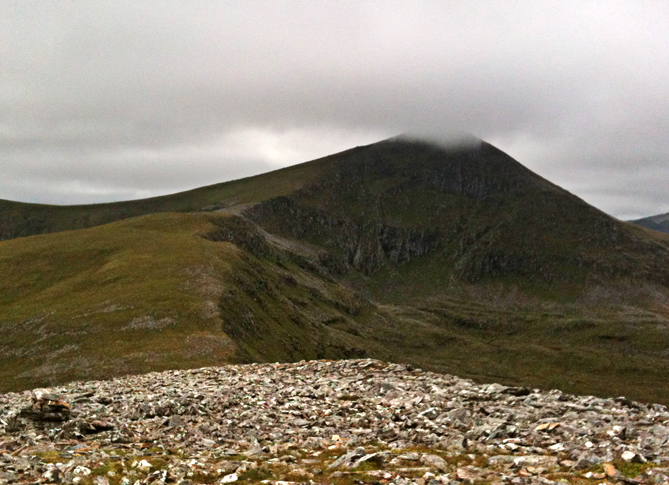 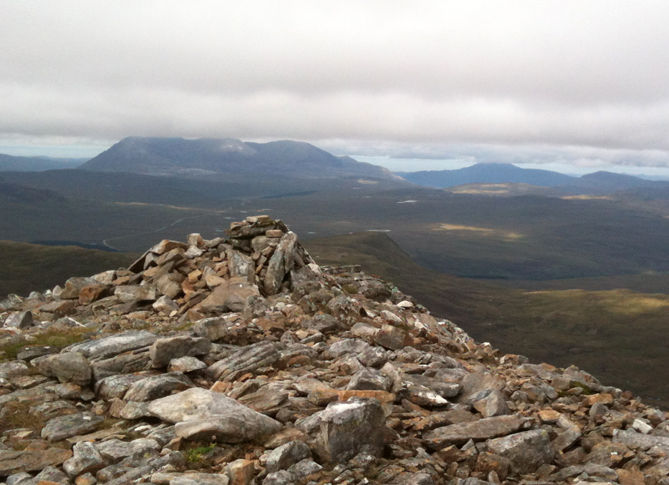 Once we did find the path the descent got easier and was followed by an enjoyable pull up to Sgurr Mor with stunning cliffs on our right set against views northwest to Loch Broom and An Teallach.

The top was still misty, but whilst having lunch I became so mesmerized with Sgurr nan Clach Geala appearing and receding in the mist I was all for heading in that direction rather than the much easier route to Meall Gorm

The walk to Meall Gorm was a gentle stroll, made interesting by the solufluction terraces we crossed. (Definition of solufluction for those like me who don't know much geology: Mass movement of soil and regolith affected by alternate freezing and thawing. Characteristic of saturated soils in high latitudes, both within and beyond the permafrost zone - http://www.landforms.eu/cairngorms/solifluction.htm) On to Meall Gorm and Bertie got there first. – and some speculation about future walks in the area, including coming up Meall Gorm and An Coileachan again but next time from the south – before wandering off to climb An Coileachan – the last hill of the day. From Bealach Ban we found a curving path which gave easy access to the summit through the boulder fields and access to more great views. From Sgurr Mor (left) to the Assynt Hills

Yes – this was the final Munro to be followed by the LONG WALK OUT! We could see the terrain – it looked as boggy as the WH description – although we guessed it wouldn't be – this has been a pretty dry summer.
So, after more food we followed our gentle path back to the bealach then headed down the steep and boggy hillside in the direction of Loch Gorm - disturbing lots of frogs on the way - which didn't hang about to be photographed 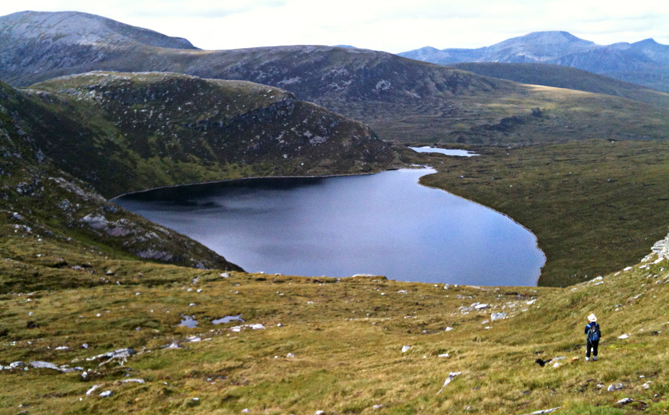 Had we walked further along the bealach we might have found a path down the hill which may have made things easier, but we did pick up a path that helped us round most of the boggy section along the west side of Meallan Buidhe. As on many occasions in the hills I was sending up silent thanks to all the walkers who had gone before me to make this path. This has been a very dry summer in this area so the bog fest minor in comparison with what it could be – but even so it was really testing my ancient knees and that path was bliss. Sadly it did eventually disappear and we were left to bog hop our way down to the landrover bridge then back along the Abhainn an Torrain Dubh. From there the long walk out got slower and slower – even the dogs, who'd spent most of the day racing around, were now just trotting along behind us, as exhausted as loyal spaniels get

. The legs ached, the knees were agony and the path was midge ally – but eventually the green Met station came into view – never have I been so glad to see an automated Met station in my life before. To be fair it was a lovely evening with stunning views of Beinn Dearg and its companions and walking into a beautiful sunset amongst the fair Fannaichs its not to be missed. 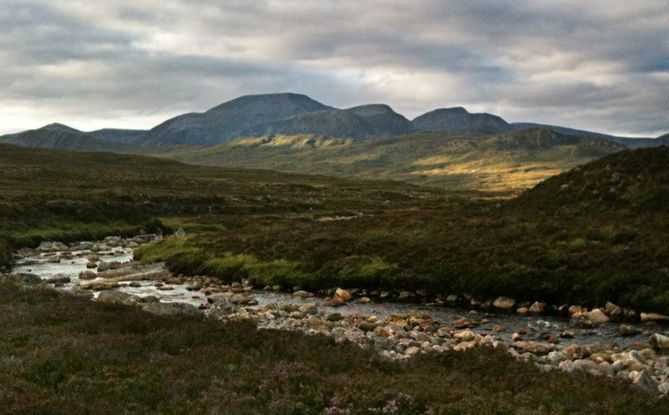 (And the next day the knees worked, the pain had vanished and the dogs were happy to have a lazy day