Around High Raise and Rampsgill Head

Around High Raise and Rampsgill Head


This had my classic beginning to a Lake District trip - Friday night train to Windermere, walk up to the hostel near Troutbeck, and carry on from there in the morning - the intention being to take the bus over to Hartsop. But nothing quite wanted to go right, so that I found myself with a delayed train and a long wait at Oxenholme - and then in the morning with the promise of a very sunny day, and no hat...

After finding my way down to the bus stop by Troutbeck church, I managed to fulfil my original lakeland ambition by going over the Kirkstone Pass (even if in the bus) - it was the sign for the pass on the road to Troutbeck Bridge that first tempted me into more wandering than just around Windermere. Glenridding provided me with a new hat, at the cost of taking me three miles out of my way, and the road back kept distracting me with raspberries, further delaying the start of the walk. In theory this wasn't the end of the world, since although I had a few summits planned they were mostly fairly close together...

I've walked down the road from Hartsop twice, but never up it - it looks quite different the other way round.

The path up Hayeswater Gill is nice (if slightly relentless as a beginning), and eventually leads to a very economical construction. Three in one - wall, stile and bridge Hayeswater was a nice place to eat lunch, with High Street looming over the lake. It was also pretty busy - comparatively. At least 10 people must have gone past or nearby while I was sitting there! After all the fuss over the hat, the day was turning quite hazy - still fine for views, not so good for photos.

The Knott was my first summit, and gave me a view out along the Nab, where I intended to go later - a nice smooth contrast with knobbly Steel Knotts. The Nab and Steel Knotts I then went up to the Straits of Riggindale and Short Stile - I'm saving High Street itself for a later date, but don't plan to go any further north than Long Stile then.

I seem to have a thing for water - my first sight of Haweswater, like my first sight of Kentmere reservoir on another trip, left me standing there looking daft for a while. (And even without water it's always exciting to get to where you can see the Other Side.) The Straits of Riggindale and High Street From here I was often following edges - first round the head of Riggindale to Kidsty Pike. Then over to High Raise. I left my bag here for a while, while I went down to the old cairn on Low Raise and back, with views over the other side of Haweswater. 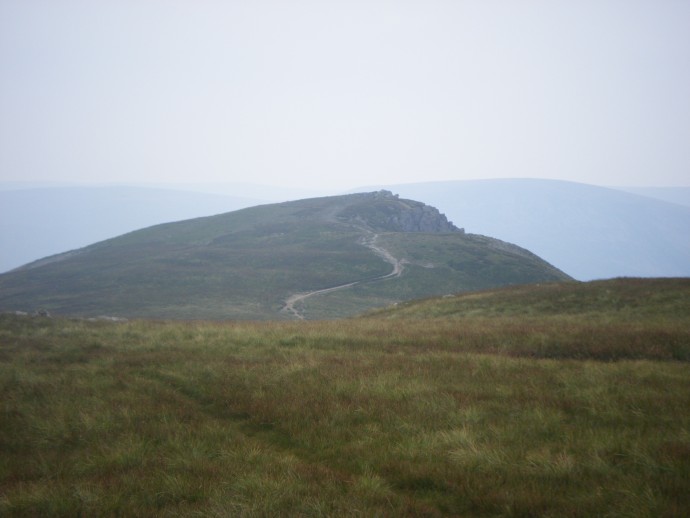 Hills in the mist

I'd enjoyed my running around, but by now I knew I was never going to make it over to the Nab and back, and get down to Patterdale for dinner - and I couldn't face climbing right up Rest Dodd anyway! So a change of plans, and detours to Brock Crags and Angletarn Pikes on the way to Boredale Hause and Patterdale.

Brock Crags was another leave the bag and run job - boggy but fun - and it gave me my first sight of Angle Tarn, and another moment of standing there daft. 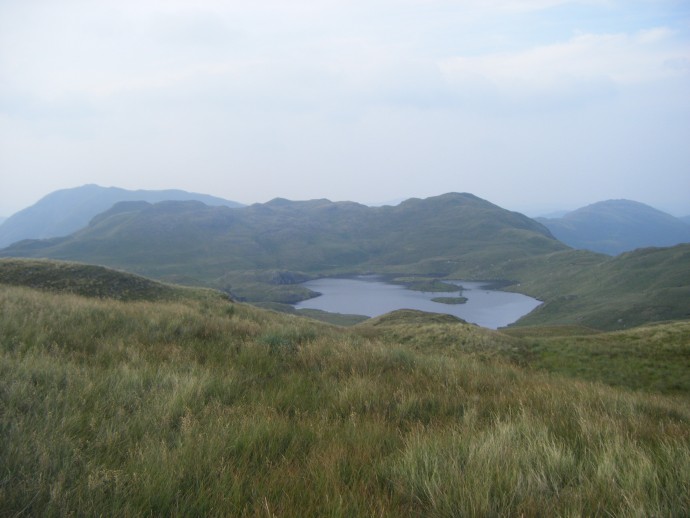 Angletarn Pikes were much more frustrating - I knew I had to head away from the main path to find the summit(s), but I got mixed up in an apparently endless succession of knobbly bits, up and down and up again. I finally found one high point with a decent cairn, from where I could see another high point nearby - not much of a cairn on the true summit, though! Angle Tarn and the head of Bannerdale And then the final descent - with views ahead to tomorrow's plan. And I was still too late for dinner. Bed was very welcome all the same! Re: Around High Raise and Rampsgill Head

What a beautiful day even with a bit of haze, great photos of those stunning surroundings and particularly the 'photogenic sheep'

Re: Around High Raise and Rampsgill Head

They were posing beautifully!