Set off with a large pack, kit shared out (almost) equally

Left Coylumbridge at around 10am, and held a steady pace, dodging the many cyclists along the lovely path ( I was going to be very envious of them on my return jouney!)

Weather was stunning, really mild, no midges, a few horrid cleggs though! A gentle climb all the way up to Lovely Loch Einich. We had thought about the route up from the Beanaidh Bheag, however, the sound of the Laird and his shooting party kinda put paid to any further thoughts on that score! 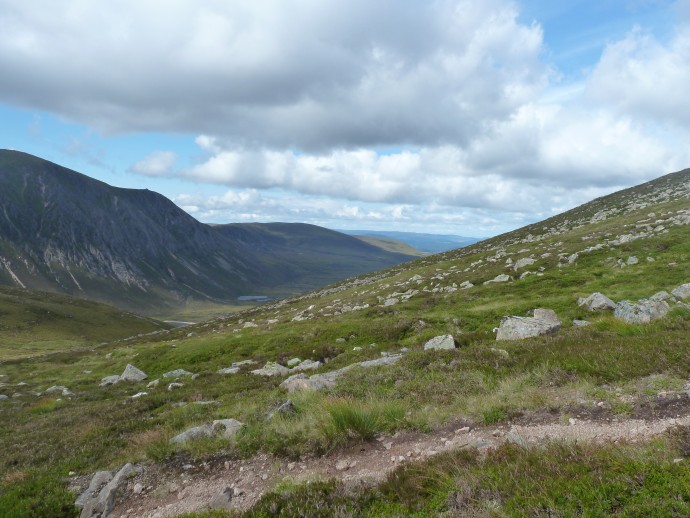 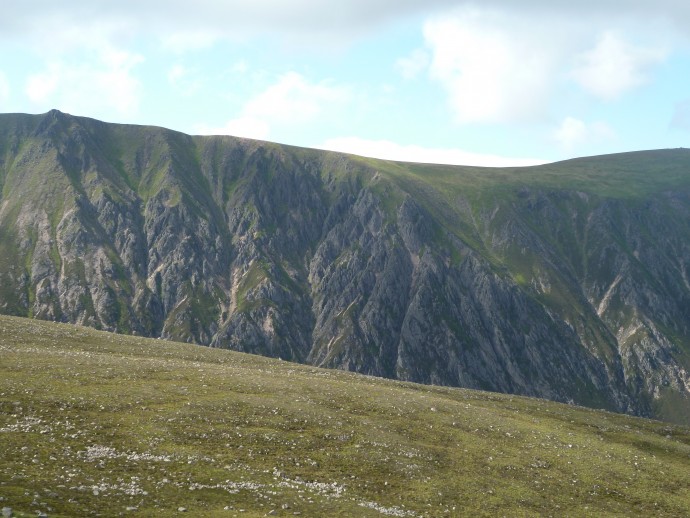 So on we went to Coire Dhondail, where there was a reasonable Stalkers Path most of the way, it did peter out near the top, but it was easy enough to find our way onto the summit, which turned out to be a huge plateau. We spent a little time finding our Camp Site, choosing a lovely flat piece at the Wells of Dee, where we had lovely fresh water trickling along, hard to believe that this little trickle turns into the magnificant River Dee!! Anyway, got the tent up and decided that despite my developing blisters, we would "Claim" Cairn Toul and Sgor an Lochain Uaine. It was a beautiful walk, made a bit more special by the evening light on the mountains. 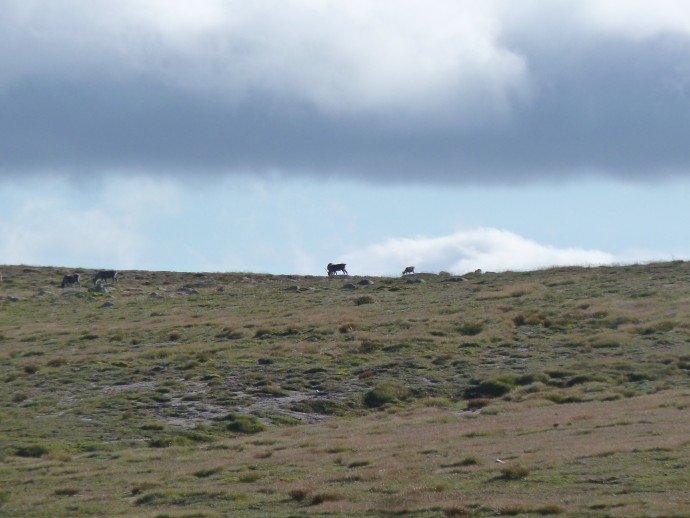 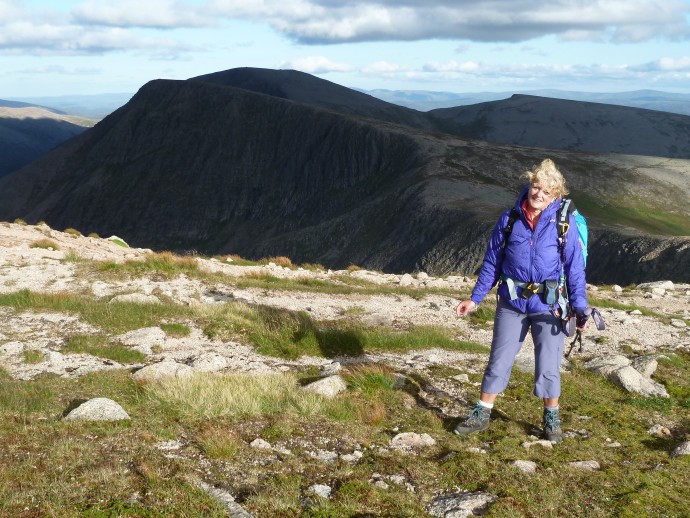 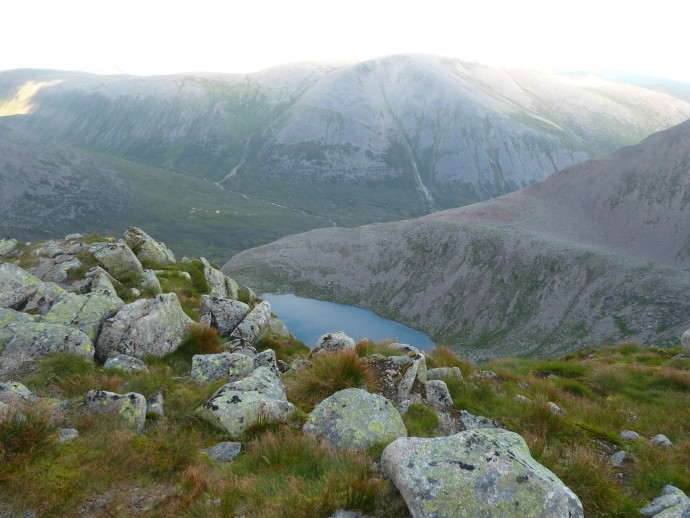 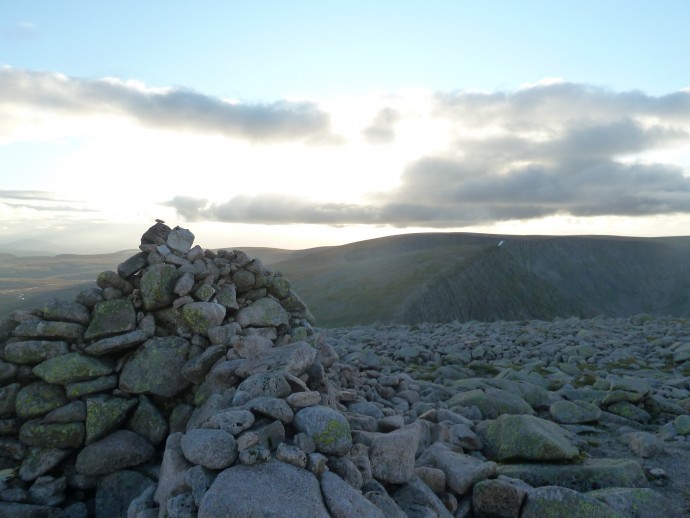 As we walked back, the "neighbours" were munching their tea, apparently oblivious to our movements! snow in the Coire only disappeared twice in last century

Finally time to get the boots off......ouch! blisters well and truly hurting now! however, the sneaky bottle of Shiraz (decanted into my spare Camelbak) helped tremendously! Salmon and Potato with a Dill Sauce, courtesy of Mountain House, was consumed and enjoyed, funny how good things taste out on the hill!
Time for bed, both done in, and feeling very pleased and at one with nature.

Sunday Morning......Ouch! on top of the World, at 1265m and having to put on a pair of boots to walk a further 10 miles wasnt filling me with much awe. However, "Man up" I did, M&S Porridge, a lovely cup- of coffee and once the initial pain of putting my boots on subsided, We were good to go! tent packed and packs lighter after the consumption of our food (and did I mention the wine?

Didnt take too long to summit Braeriach, and it was lovely to look across to Cairn Toul from the opposite direction! Met a lovely couple of lads with Charlie the Chocolate Labrador, who had set out at 6am! Made me miss my boy who wasnt with us on this trip (no room in the tent!....and carrying food for a labrador ?) 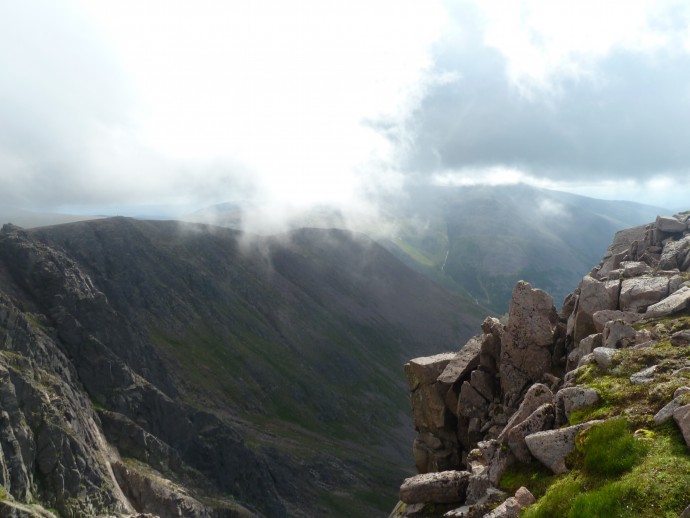 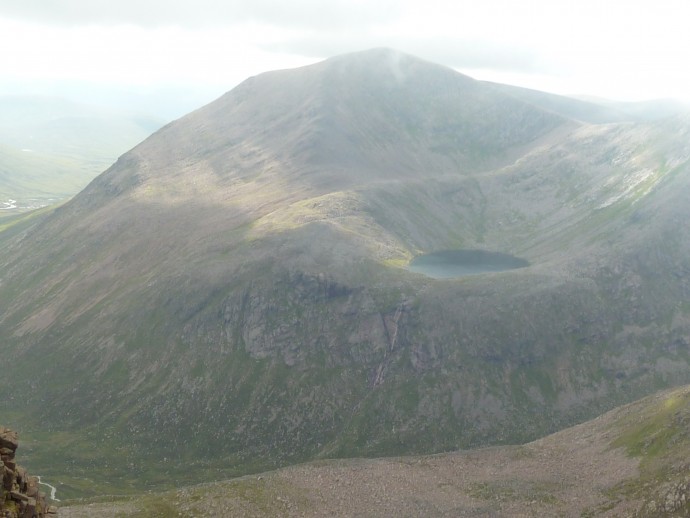 It was a slow decline down the mountain side, by now I was trying not to compensate for my sore blisters, without much success, the boulders were the easy bit for me! however, slow and steady, we made it down the easy found path on to the Lairig Ghru. Must be about 30 years since I was last on that section of path, (am I really that old?) and my goodness, what a lovely path it is nowadays!

Slowly reaching Rothiemurcus Forest, and more and more people on bikes, taking me all my time not to push some kid off and nab his bike!!! However, just when I was having thoughts of hiding my pack in the Forest to collect sometime later, a lovely Dutch couple from Haarlem offered to carry my pack the last few Kilometres! With fresh conversation and a lighter load, it made all the difference! Thank you to a lovely couple!!

Fantastic experience, Wild Camping in the Cairngorms, WOW! Ill be doing that again! 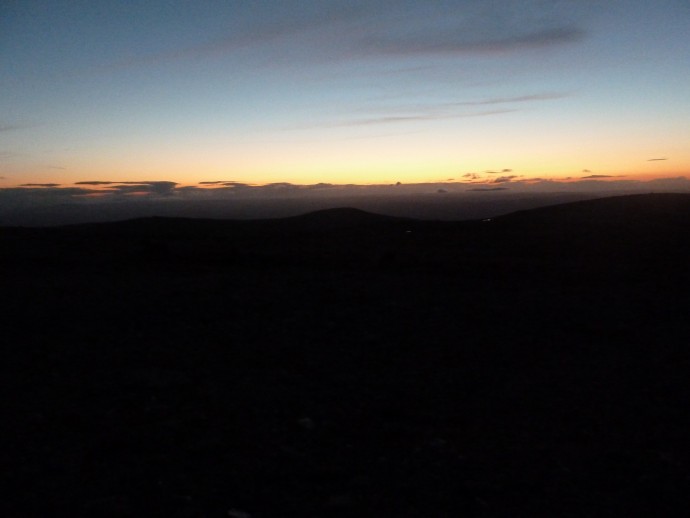 Somewhere in the dark are the munching deer! A View with a Room!

Hello.
That was me and my mate gaz you passed with Charlie the choclate lab. He has walked with quite a few walkers from this site. We managed the 7 munros. 41km 2995m of ascent in 13.5 hours. My feet where in bits by the end of the walk

I've enjoyed your report and envy you the sunshine blazing on the tent when you woke up. I've camped in that spot on a lovely evening and woke to 5m visibility - same day in August as well, just 15 yrs ago. We were going to camp there again this year in the hope of better moring views, but we've not had the time

rocket-ron wrote:Hello.
That was me and my mate gaz you passed with Charlie the choclate lab. He has walked with quite a few walkers from this site. We managed the 7 munros. 41km 2995m of ascent in 13.5 hours. My feet where in bits by the end of the walk

Lovely route you took and great weather! Heart warming to hear about the Dutch folk who helped with your gear. I always think you find a good class of folk on the hills!