A’Chralaig stands aloft above the Cluanie Inn. When clear the summit cairn almost appears within touching distance. But this is a mountain that stands over 3,600ft high. Even with the higher starting point at 730ft above sea level, the view up is foreshortened. The first 1,900ft are gained in under ¾ mile. Phew!

The MWIS forecast had been promising for the day. But by the time I was starting from the lay-by a quarter of a mile to the west of the An Caorainn Mor path, cloud was brushing the summit and the cloud level continued to descend as I ascended. 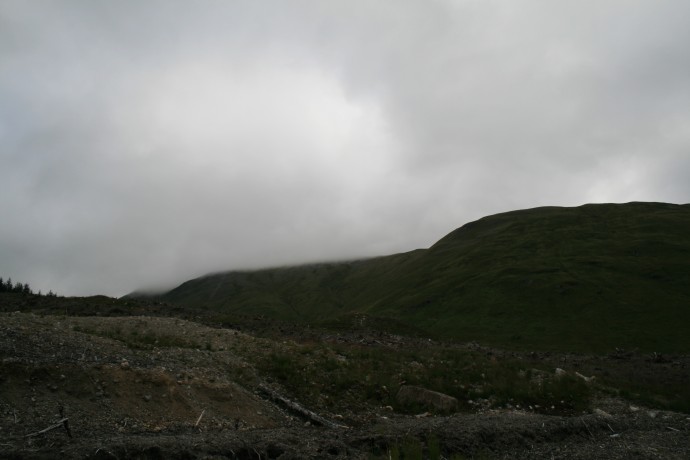 Anyway, here is the start. 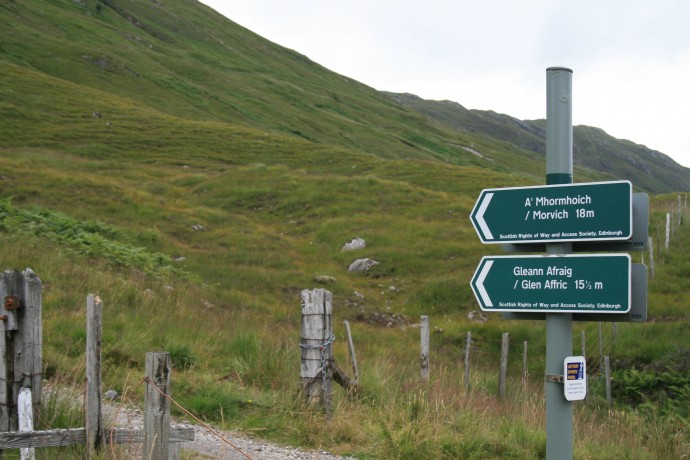 A good place to start

And the path up the hill follows shortly after then and is marked by a small cairn. I passed a couple of ladies with a black dog that was celebrating being unleashed by writhing on its back in the heather and grass. Another chap followed on a little way behind.

After yesterday’s exertions [http://www.walkhighlands.co.uk/Forum/viewtopic.php?f=9&t=24605], Mrs CL decided to have the day off by climbing to the eastern end of the South Kintail ridge with Jet. My route today would not just take in the two Munros. Still on my top bagging quest I was going to take in A’Chioch which would involve a couple of miles’ out and back along the north eastern ridge of A’Chralaig.

Am Bathach stood clear of the cloud in its shapely form, though later even it would succumb. The Cluanie Inn stood in the wastes of upper Glen Moriston. 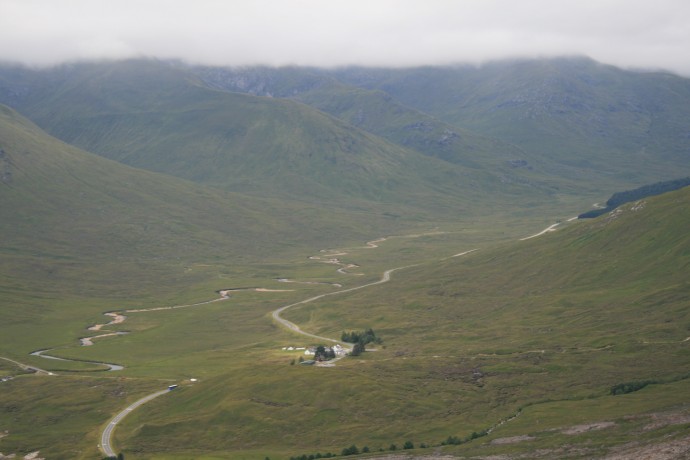 The path pops up near point 803 on the south ridge of A’Chralaig where there is a small cairn to confirm you are on the right route. Here the gradient relents for a short while before another rise hoists you up to where the linking ridge from the Sgurr nan Conbhairean group joins. This is marked by a larger cairn. But by now I was in cloud. I needed to find the ridge out to A’Choich. I tried pacing and arrived at a spot height with a further cairn. I peered over the edge of the main ridge but it did not look promising and my pacing indicated that I was still a little short of the way off. So I continued but the terrain began to feel wrong.

At the next dip, I peeled off to the east. There was a trace of a trail but it did not last long and I was in the upper reaches of a corrie. I did at least emerge below the cloud and things became clear. The further cairn was indeed where I should have turned off. The descent at the cairn is over quite steep grass with rocks but there is only 100ft or so of descent. I should have relied on my pacing!. Nevertheless I was able to contour around easily enough on to the broad ridge and was soon on my way out to A’Choich. It is a grand promenade and the rise out to the top is very gentle.

It was a shame there was so much cloud. It is a good viewpoint for Sgurr nan Conbhairean And the north east corrie of A’Chralaig and lochan with the linking ridge to Mullach Fraoch-choire. 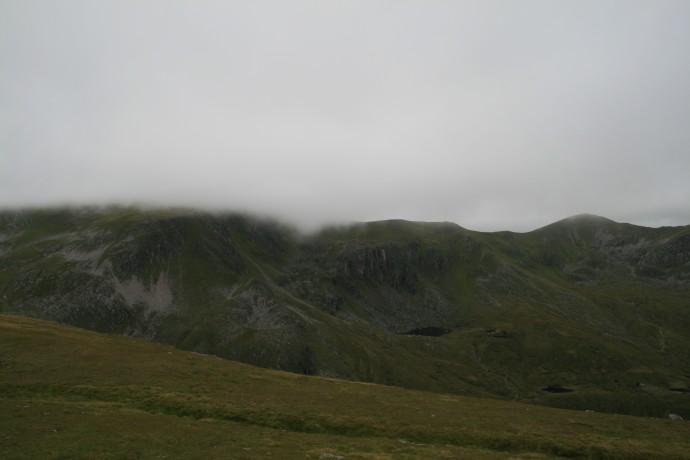 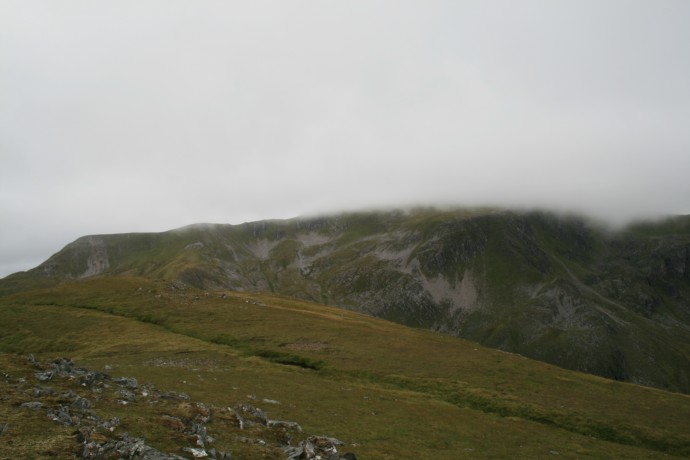 Closer look at the beginning of the ridge out to A'Chioch

And here is one of the final slopes back up to the south ridge. At this point I spied the start of a stalker’s path not marked (so far as I can see) on any map but just about visible in the photograph. This might also provide a way off the south ridge, though I did not test this theory. Here is the view out to A’Choich with the cloud lifting off Sail Chaorainn. And here is the cairn marking the way off with the summit of A’Chralaig behind. Back on the main route it did not take long to reach the summit but it had again become swathed in cloud. I stopped here for lunch. 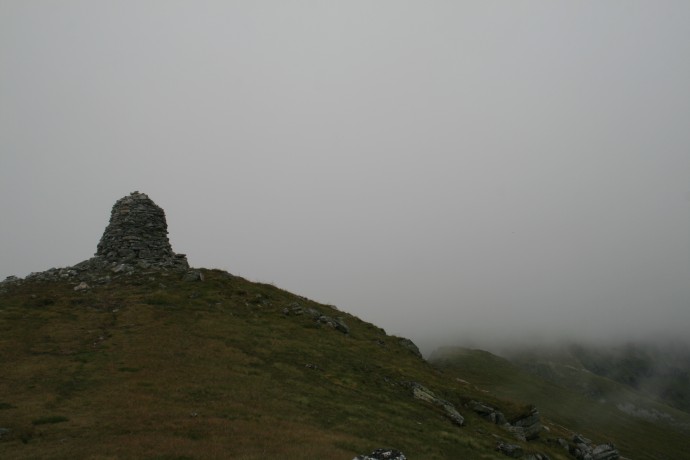 My phone buzzed. A text arrived from Mrs CL. She was on the top of Creag a’Mhaim. So I rang her and we had a chat each on the other side of the glen from the other! She was having some views. Mine were definitely limited.

It was time to move on. Ciste Dhubh came into view below the cloud as did the ridge ahead to Mullach Fraoch-choire with its pinnacles looking a bit fearsome in the gloom. 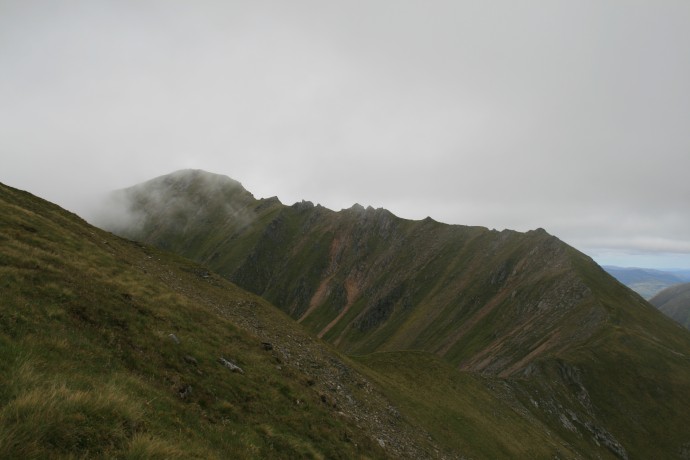 The story of the pinnacles is told in other recent TRs for this mountain so I will not describe it here. Suffice it to say that I took the by-pass path both ways. I was on the summit an hour after leaving the summit of A’Chralaig. There are fine views down into Glen Affric And I am sure that there are fine views to Beinn Fhada, Ceathreamhnan, Mam Sodhail etc, but I did not see them today. The cloud came down and also obscured the view back to A’Chralaig. 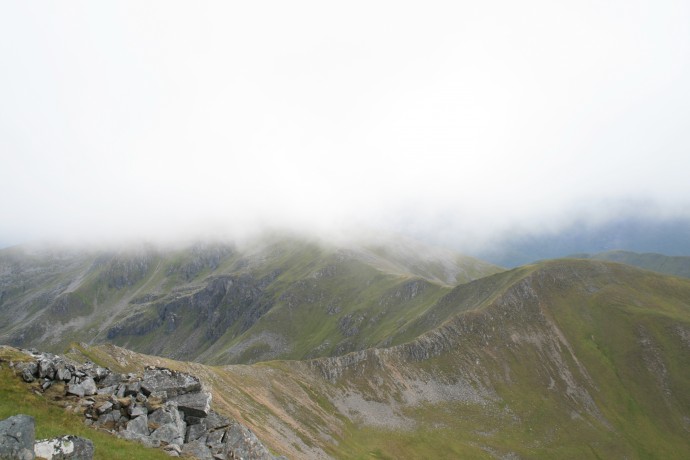 But Ciste Dhubh was nice. OK so how to get back to the starting point from here? There are three main options. Number one is to repeat the outward route back over A’Chralaig. This has the advantage of a path the whole way but requires a re-ascent of 600ft or so. Number two is to follow the WH route suggestion. At the col between Mullach Fraoch-choire and the top there is a small cairn that marks the start of a path that drops into the coire to the west. The path does continue a fair way but in a mainly north westerly direction and then ends up in the bogs at the watershed of An Caorainn Mor. Number three was the option I took. This involves re-ascending the munro top of Stob Coire Chralaig and then descending into the coire at that point. A good route down easy angled slopes can be found mainly on grass, cutting across the top of the stream that rises in the coire and across to the western slopes of A’Chralaig itself. The ground steepens here but it is on straightforward grass and I made for the end of the vehicle track in the glen, so avoiding any bogginess.

The clouds lifted revealing A’Chralaig from the munro top 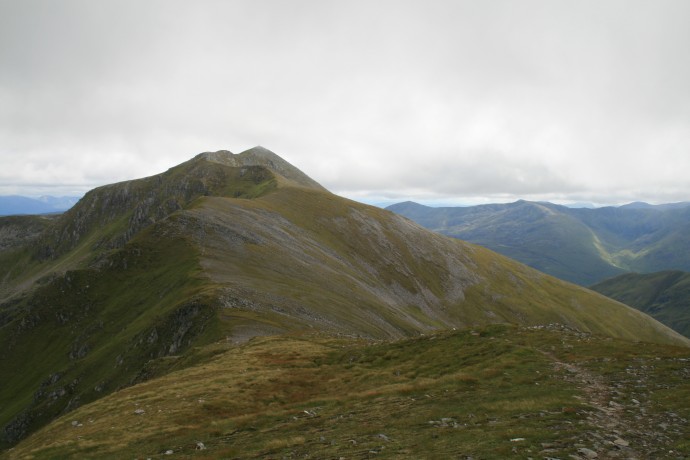 and A’Chralaig again from the col from which I returned to the glen. I thought the zig zaggy nature of the ridge was quite interesting. Once back in the glen it was a pleasant walk back to the road and then to the lay-by where I had an appointment with Mrs CL. However, I was a little early and a kind couple gave me a lift the half mile or so to the Cluanie Inn (thank you!) where I was able intercept Mrs CL.

So 7.5 hours including the "out and back" to A'Chioch - a good leg stretch amongst the clouds.

One of my favourite walks this even though it was done in clag. Good to see the pinnacles