Looking at the weather forecast for the weekend Huck Finn and Clippers wanted to get one more walk in before the end of their holidays and so invited Senga along to double the tally of Munros for the WHW team.
Not having seen a report recently from the sneaky peaky midweek club I decide to make the Oh Sod It club and took a day off to join them.

Low cloud and rain on the drive up through Callender and Glen Ogle, it did not bode well but we pushed on and by the time we arrived in the carpark at Lawers it was dry and clearing.


Having walked the gentle slopes of Mount Keen the previous Saturday the more serious uphill event was the cause of much selfdoubt for the girls. It is really that one? its awfy steep are you sure? (good job Lawers is masked by Beinn Ghlas to start with. Prepare to start including a new hair cut for Senga Off we go through the sculpture park and into the nature reserve - this isn't bad not so steep after all. As we clear the upper fence people can be seen on the by-pass path, do we go that way? No, look at the path zig zaging up the hill in front of you - gulp. Slow and steady, lots of we breathers, no problem. Are you sure its that one 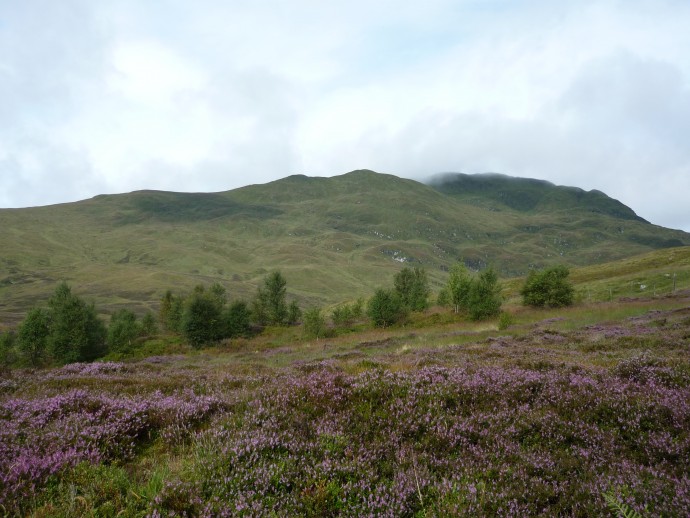 Beinn Ghlas from the nature reserve Stop for breakfast at 870m shoulder before the final steep climb to Beinn Ghlas summit, that slows the pace down a bit and we are overtaken by a group of younger, fitter walkers. Press on at your own pace - its not a race. 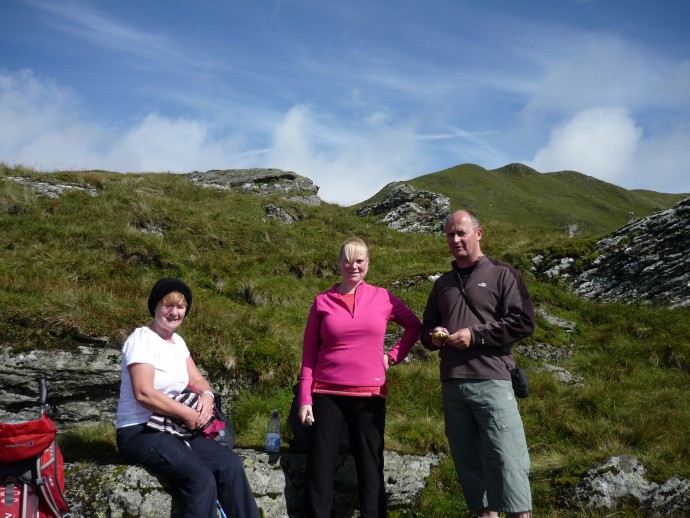 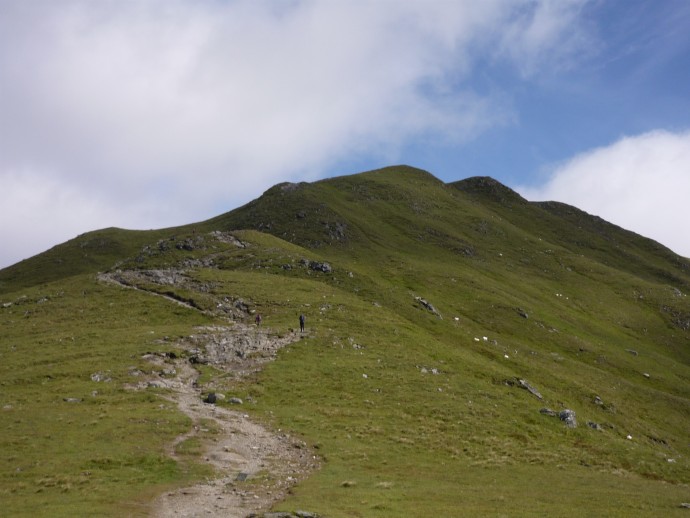 Approach for the final climb to Beinn Ghlas 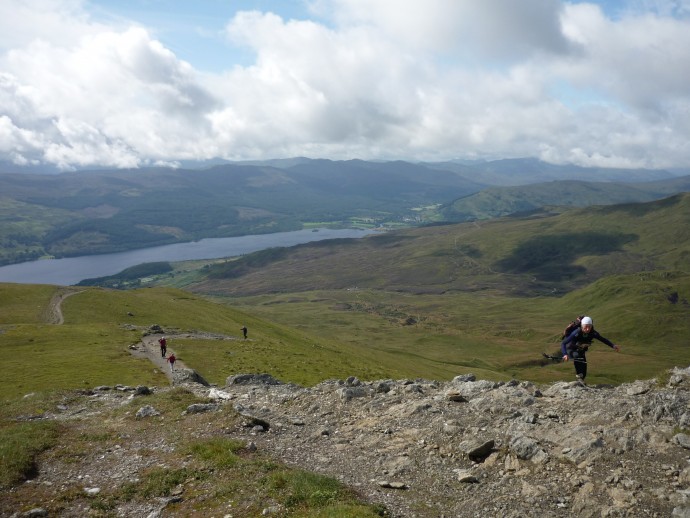 Back to Loch Tay

Joy and happiness at the summit of Beinn Ghlas and what stunning views, 2 hours 10 minutes. 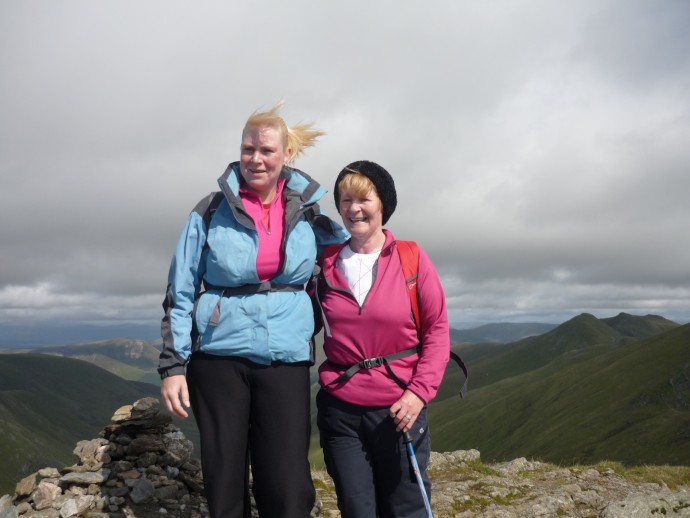 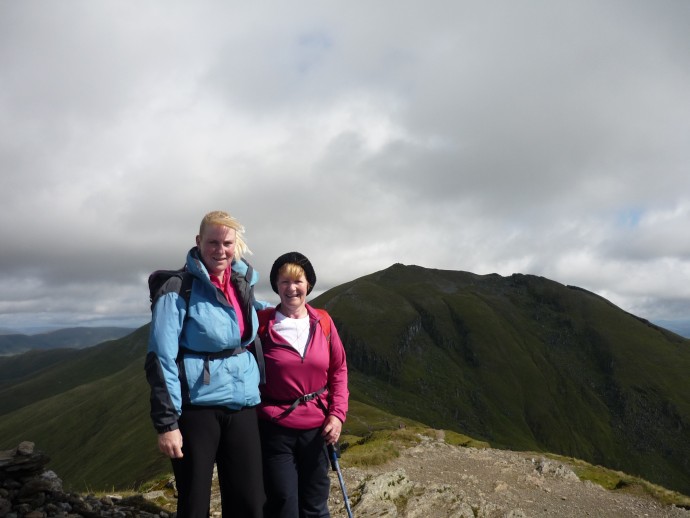 Now where - behind you Ben Lawers with An Stuc appearing

New boots OK, feet OK, onwards to Ben Lawers with the treat of a wee descent to ease the legs - if we go down don't we have to go back up? Yes, its why its called hill walking and when you can't go up anymore you are at the top (of that one anyway). 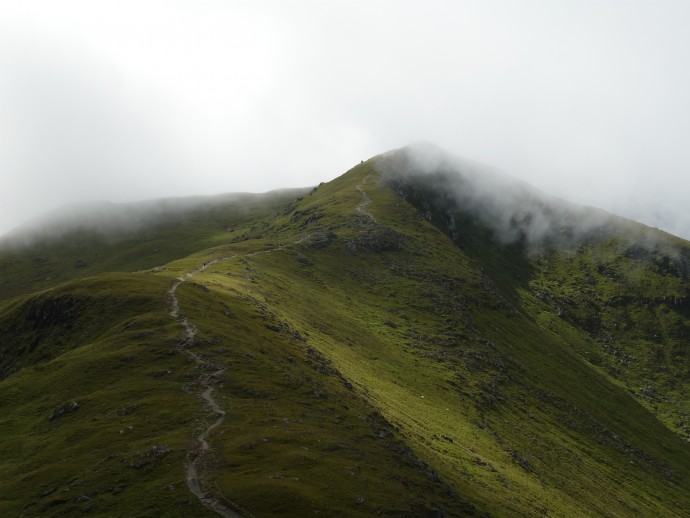 At the base of the climb to Ben Lawers the leg burn starts for the ladies, just think of all that money saved on the Jane Fonda workout regime.

Wha Hoo made the top, what views, that wind is cold where's my jacket. 3 hours 10 minutes. Take a few photos and head down the eat side to get out of the wind for lunch. An Stuc - shall we Charlie and I had considered carrying on round An Stuc, Garbh and Greigh but it was no time to leave the ladies on only their second Munro outing and as we sat eating lunch the cloud base and temperature dropped. We could see rain approaching so it was time to get moving again. As we started to descend Ben Lawers the rain turned to soft hail and was very cold. A demonstration to the girls how quickly things change and why it is necessary to hump the right kit even in good weather. Back to Lawers from the by-pass path North to Glen Lyon via the Allt a' Chobhair

Forgotten now were the tired legs as the girls lead down the by-pass path and back to the nature reserve area where the sun made an appearance and it warmed up again. Back to the car in 1 hour 55 minutes making a total walk time of 5 hours 20 minutes, very good going for the second and third munros for the girls.

Off to collect the just reward in the Coachhouse bar for a grand day out in the hills and then an Ashmans curry.

It was the third time for me on this hill and I still really enjoyed it, well done to the girls

, it was good to see them talking about the next hill in the coach house

Some of my pics from the day - 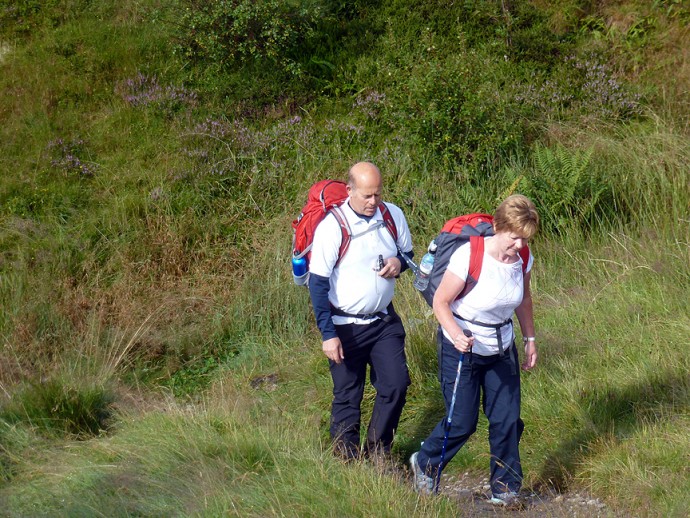 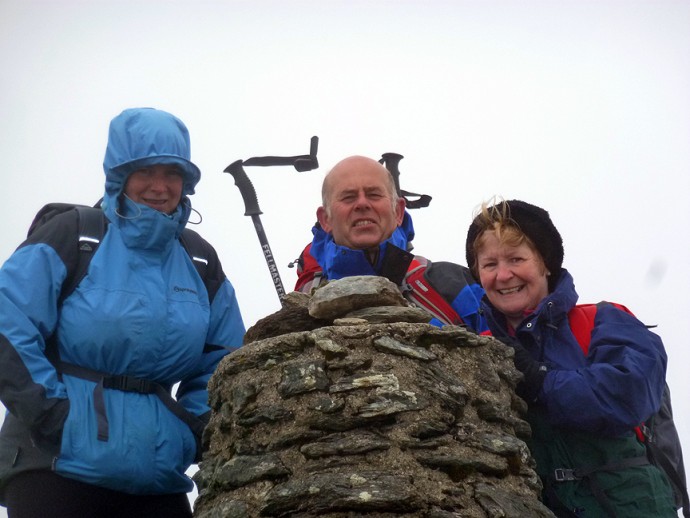 Frigate - you forgot to mention the Snake ?

After finding a snake on our Mount Keen outing which turned out to be a Slow Worm. Not a snake or even a worm but a semi-fossorial limbless lizard, genus Anguis Fragilis protected under Law in the UK.

This had us hunting for more wildlife and we found this exhibit.

Cracking report from the OSICs !!!!

The MWSPC better watch out

Nice report and great pictures. Looks like a perfect weather day. Where next?

Nice report and great pictures. Looks like a perfect weather day. Where next?

Clippers looks a bit worried in some of those picks

Was that the bear visiting the woods again

The MWSPC better watch out

Thanks Polly, I could get used to the short week

skuk007 wrote:Nice report and great pictures. Looks like a perfect weather day. Where next?

Thanks double 0, weather was a bit mixed but perfect for walking, Can't understand it they want to a flat walk next!! Time for a next training stage of the West highland Way but I guess I'll find something vertical nearby.

pigeon wrote:Clippers looks a bit worried in some of those picks

Was that the bear visiting the woods again

Never knew a loose bootlace could be so much fun