Oh Brothers, what a day!

Oh Brothers, what a day!

Things did not really start out too promisingly. There were the two of us. Jet was accompanying me. MWIS had promised cloud free tops. That was not what I saw that morning.

I was looking for a relatively short day. We were due to start our travels south that day. I picked on two of the Brothers that I had not repeated as fulfilling the requirements. It is possible to ascend Sgurr a’Bhealaich Dheirg by its south east ridge. Most will combine this peak with Aonach Meadhoin, but the south east ridge does provide a convenient access to the main ridge. Once upon a time it was possible to start the walk by using a forestry road that leaves the A87 at NH052114. It may still be possible but new fences have been constructed. Just a little to the east, by the Allt Coire Tholl Bhruach at NH054114, there is a path which is not marked on the 1:50000 OS map and nearby there is convenient parking. The path runs above the true left bank of the Allt Coire Tholl Bhruach for a kilometre or so until it disappears into boggy ground near a sheepfold. At this point, ahead and slightly higher another, once substantial, stalker’s path can be seen. This is clearly no longer maintained but must once have been well used and it ends at a pony stance after another 500m or so. Here is a shot of it looking back the way I had come. If anything, the cloud was lowering further. The atmosphere felt oppressive. It was humid. In the valley there was barely a breath of air. Insects hummed and buzzed. I was already glugging at my water bottle. At the pony stance I had the choice of carrying on up Coire Tholl Bhruach or tackling the steep north side of the south east ridge of Sgurr a’Bhealaich Dheirg. I chose the latter, if only to see if I could catch a breeze.

I headed down to the stream. It was quite boisterous but we found an easy enough crossing and started to tackle the slopes above. The slopes were straightforward. But soon I was dripping with sweat. I followed a fence line that led obliquely back south eastwards in order to ease the gradient. The ridge line soon came and with it the welcome breeze I had been seeking. Though like me it was struggling to muster much energy. I had only ascended less than 300 metres but the warmth had seemed to sap a lot of my energy. I slowly ground my way to the 610m bump at the end of the ridge, Meall a’Charra. Just before then I had my final view of Loch Cluanie. Here the gradient relented. I was now into the cloud. It was the sort of milky white cloud that provides a hint of good weather. The temperature had cooled in the cloud and it was a lot more pleasant. The broad ridge dipped a little before rising again. There are a few ups and downs not marked on the map. Traces of a path came and went. The cloud became thicker. The ridge loomed up ahead magnified in height, as always seems to be the case, by the cloud.

Jet and I continued. The way is easy. I had been going for an hour and a quarter and decided that we both needed a snack. I took off my sack and turned around. I hurriedly extracted the camera from the bag. Moments later we were enveloped again. Back in the cloud

Well that was a pleasant surprise! We continued on up over the 806m spot height. The ridge narrowed and steepened pleasingly. A path had now formed and in the cloud I could just make out the main Brothers’ ridge coming in from the right. It was not far. I completed the final 70m of ascent on to the main ridge in short order. The path was a lot more eroded here. But things were looking a lot more promising. Ten minutes later we had popped out above the cloud. The Brothers’ heads were exposed. The Brothers' heads and A'Chralaig

This was the view to the south. It was hot again. The spring in my step that these conditions have temporarily provided drained again. The summit of Sgurr a’Bhealaich Dheirg looked so close but it seemed to take some time to get closer. It is in fact a further 150m of ascent from where the main ridge is joined. A little further on Sgurr Fhuaran and two of her Sisters appeared over the north ridge of Sgurr a’Bhealaich Dheirg. And here is a view back along its spine. Having guided the dog along the final tricky blocks we did not stay long at the true summit. Jet was enjoying the view though. We stopped for lunch for 15 minutes or so at the cairn on the 1014m spot height and watched the cloud pass by. Nearby mountains looked like islands in a sea of cotton wool. But the tide was going out. The inversion was breaking down.

Even so as we descended westwards we re-entered the cloud. Although Saileag was only a little over a kilometre away, the route is full of humps and bumps and it takes a little longer than you might think. At times the ridge is quite (h)airy but Jet managed what minor scrambling there was. Only towards the final ascent of Saileag did the veil of cloud start to lift. although Sgurr a’Bhealaich Dheirg remained covered. It took less than 40 minutes to reach Saileag. Here we met our first person of the day. He had come up from the glen via the Bealach an Lapain and was travelling eastwards. He left us the summit. The Sisters reveal themselves

The Sisters started to become less modest and revealed themselves. Here is the view down Gleann Lichd. And the Sisters finally reveal all (well almost). We had no reason to hurry for the moment. It remained hot. I drank my Jaffa cakes (good job they had been in a bag). I also drank in the views, appreciating how lucky I was to be out on a day like today.

Mrs CL had agreed to pick us up at the foot of the Bealach an Lapain at a pre-determined time. So it was a question of judgment of when I should leave so as not to leave her waiting. As it happened we were able to descend from the summit of Saileag to the Forestry Commission car park in an hour. Jet and I passed one other person sweatily making his way up the slopes of Saileag. 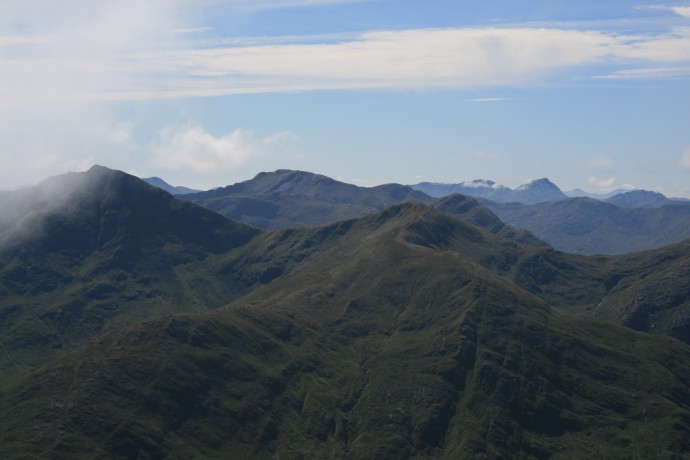 No, the next photo does not show a sudden deterioration in the weather. But it is one of me in roughly the same spot as the photo above but taken in February of this year. See here http://www.walkhighlands.co.uk/Forum/viewtopic.php?f=9&t=18476 And here is the view down to the road from just near the Bealach. Yes it is steep, but in the dry conditions it was easy. Better going down than up and the dog was able to find some water. The path is obvious as it trends generally left towards the block of trees, and then right. The total time for the walk? – under 4½ hours (including many stops). So much experienced in so short a time!

PS here is a photo of the path at the start. You were not kidding when you said you got lucky CL, wow. Those photos are stunning, what a lovely hike. Good to see jet out there covering twice the ground too

Very nice. And useful. I am left with Saileag still to do but having done the Sisters and the other 2 Brothers, I am looking for options, not wanting just to knock off Saileag on its own. I do fancy doing it with SaBD as I got no views from the summit a couple of years back and it is a cracking summit. I always thought I would do a long route in along Glen Lichd but this provides another option.

Great report CL. Looks like a great area, seen at it's best with clear skies like you got for some of it.