Bank Holiday on the Moelwyns and Cnicht

Bank Holiday on the Moelwyns and Cnicht

I'd decided to hide out at my parents place for Bank Holiday, as I wasn't due home that weekend and I couldn't face 3 days to kill in Birmingham. Saturday had been a nice change, with a visit to the coast, but I felt the need for some hills too. My parents had their sights on Cnicht for Sunday, and since the weather looked good, I decided to go along to Croesor with them, but do a longer circuit. A couple of walks had taken me close to the Moelwyns recently, but my last time actually up them was on a break from revising for my A-levels. They were definitely due another visit!

Croesor.gpx Open full screen  NB: Walkhighlands is not responsible for the accuracy of gpx files in users posts
Being Bank Holiday, the car parks were heaving, particularly around Snowdon. At the Snowdon Ranger, there were cars spilling out onto the verges for a good 100m each side of the car park.The summit was in the cloud too - glad we weren't going up there! In Croesor, I left my parents to it and headed up the minor road towards Tan y Bwlch for a short distance. 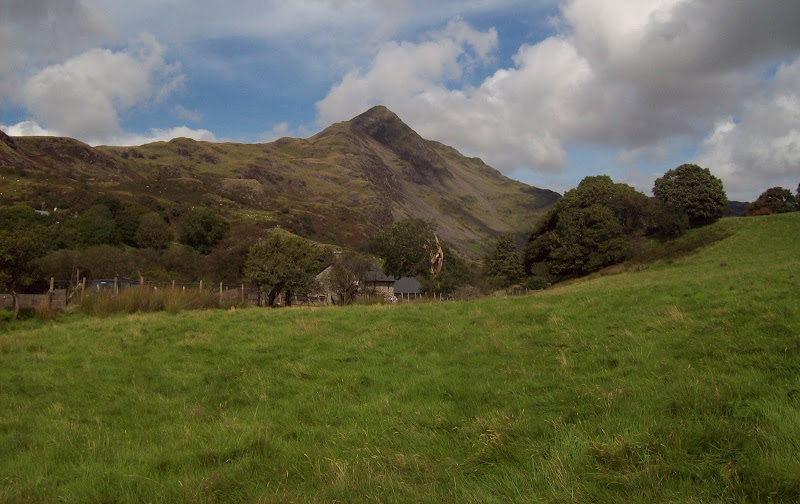 Once over the Maesgwm, I dropped off the road onto slightly boggy ground and aimed directly for the W ridge of Moelwyn Bach. Some of the rough ground could have been avoided by sticking to the road longer but I could see my ridge and I was impatient to get to it! A path developed higher up, and I passed a few folk, including three large groups of kids who I assumed had come in the minibusses I had seen parked in Croesor. Closing in on the summit, the crag which overhangs the northern face of the hill became more and more prominent. 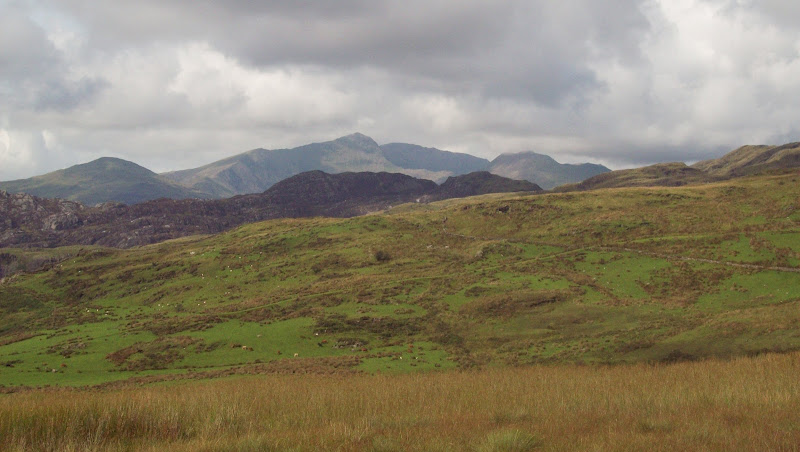 Moelwyn Bach from the W ridge: 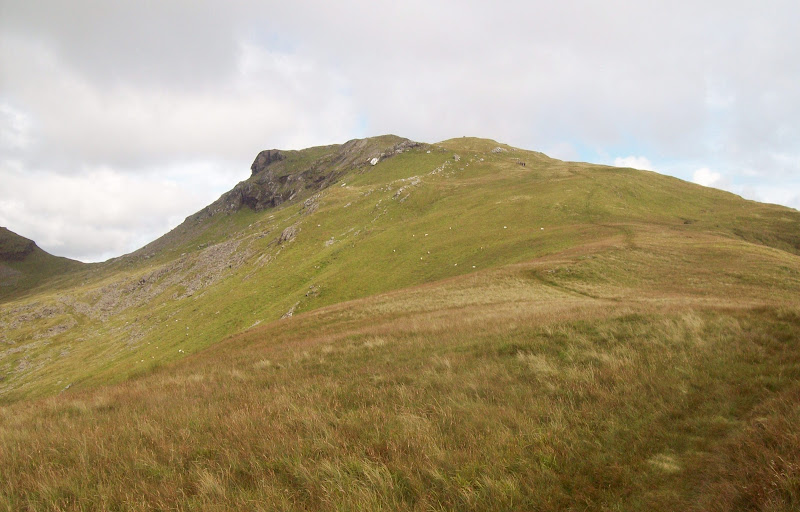 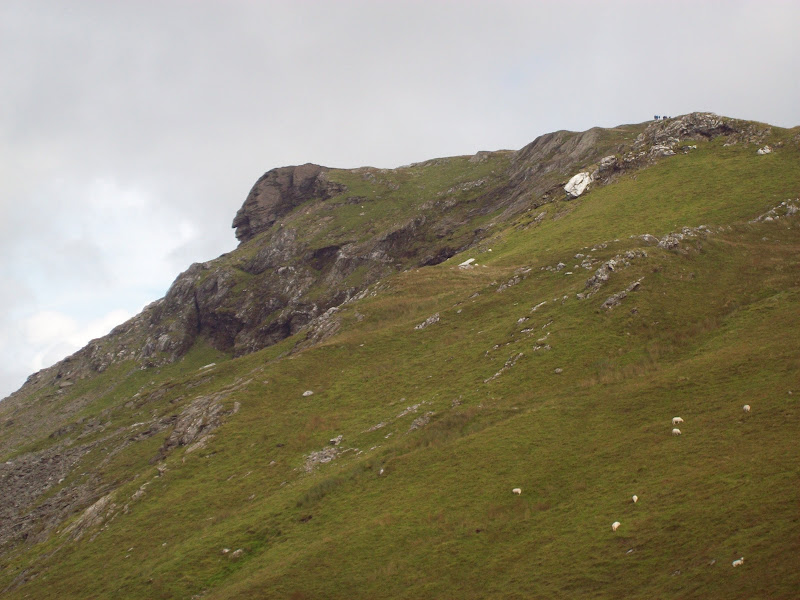 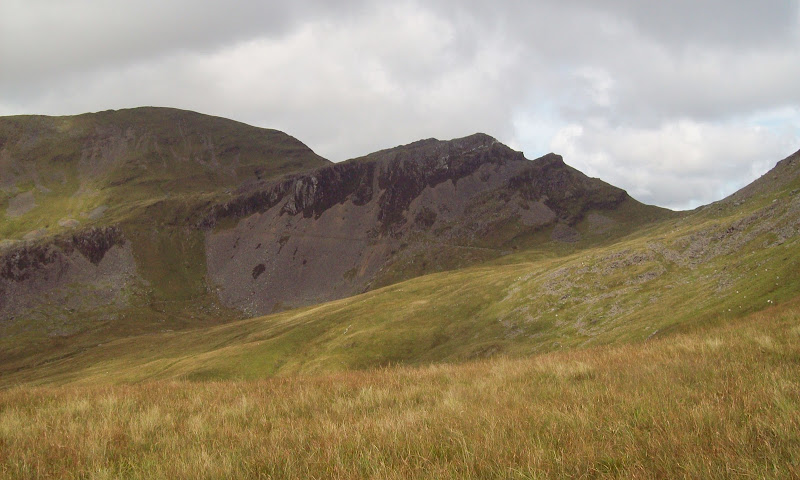 Llyn Trawsfynydd, the Arans and Cadair: 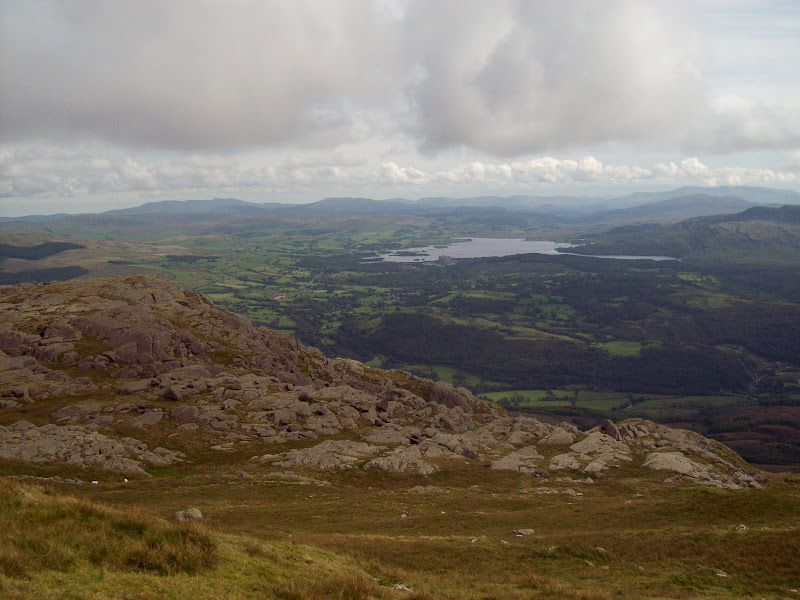 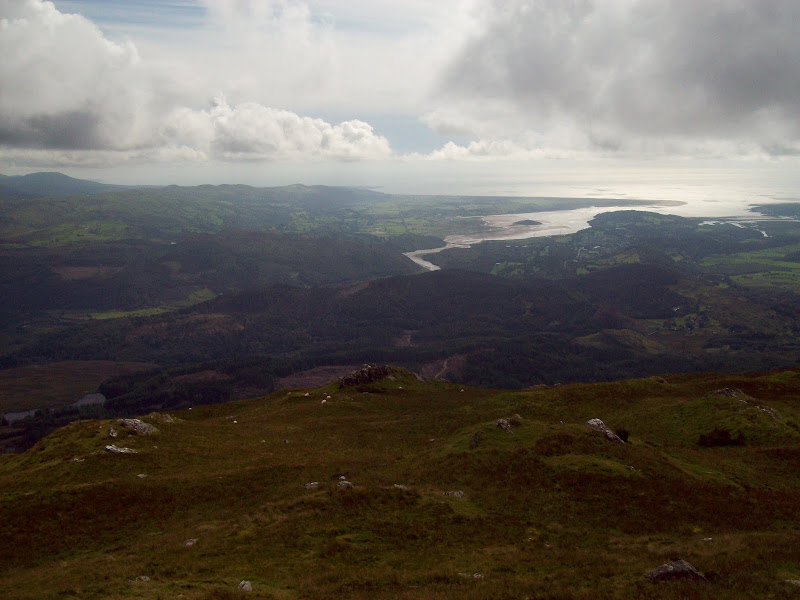 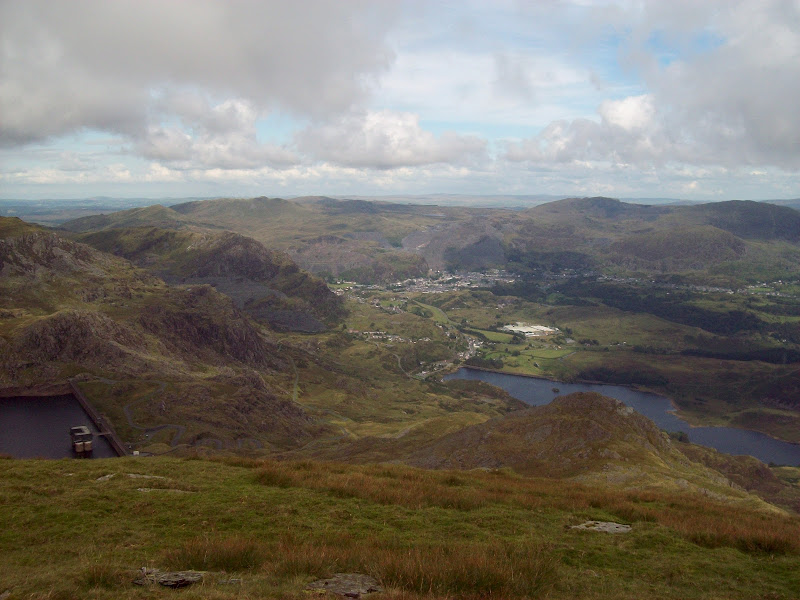 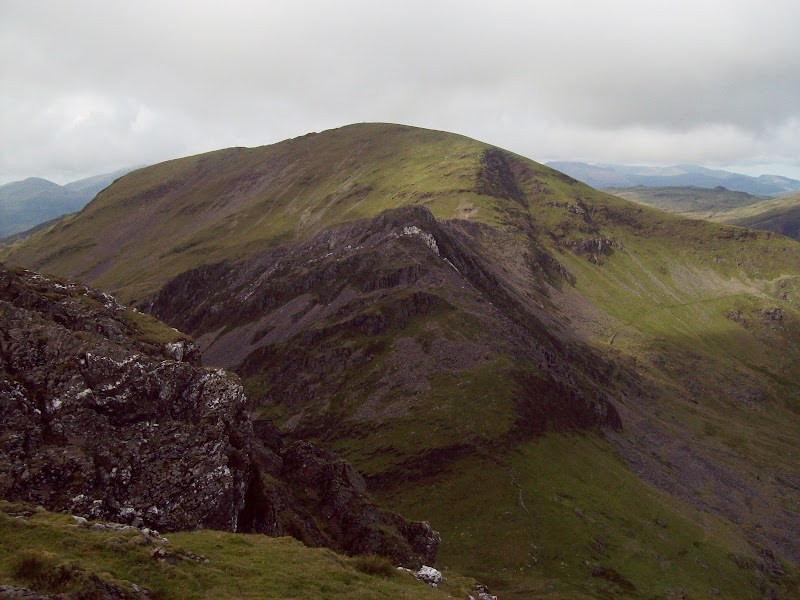 Views were also opening up to Moelwyn Mawr, south to the Rhinogs, and also behind me over the Glaslyn Estuary. I reached the summit after an hour or so, and descended the slippery path to Bwlch Stwlan. Even in the dry, the slaty rock on these hills is extremely greasy.

The re-ascent to Craigysgafn was steep but short, and had a couple of moves of easy scrambling. Then it was a brief undulating walk to the main bulk of Moelwyn Mawr, with impressive views down to Llyn Stwlan and Blaenau Ffestiniog the whole way. Llyn Stwlan is the top reservoir of a pumped storage hydroelectric scheme - one of two in Wales. 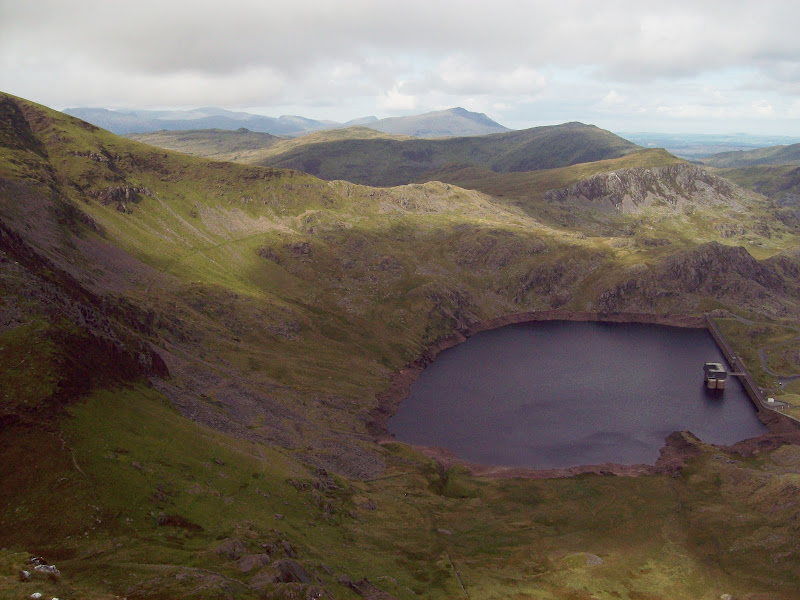 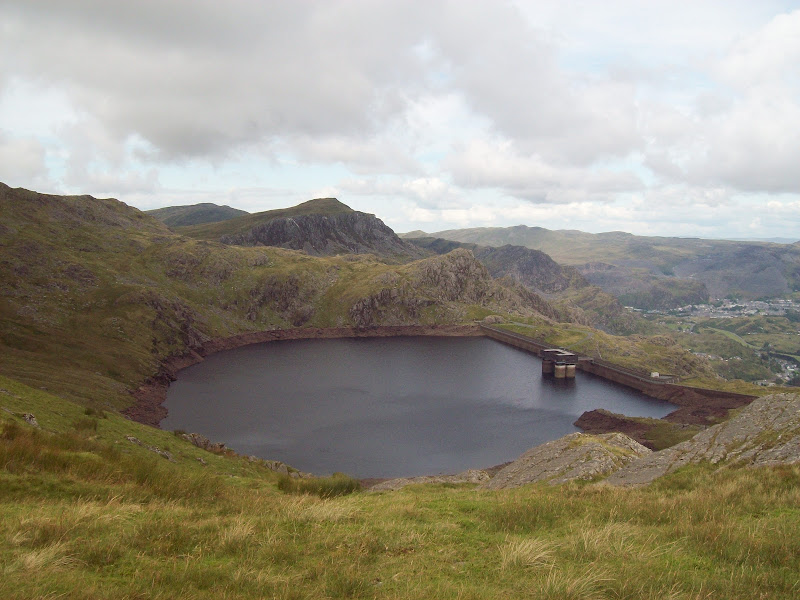 Back to Moelwyn Bach: 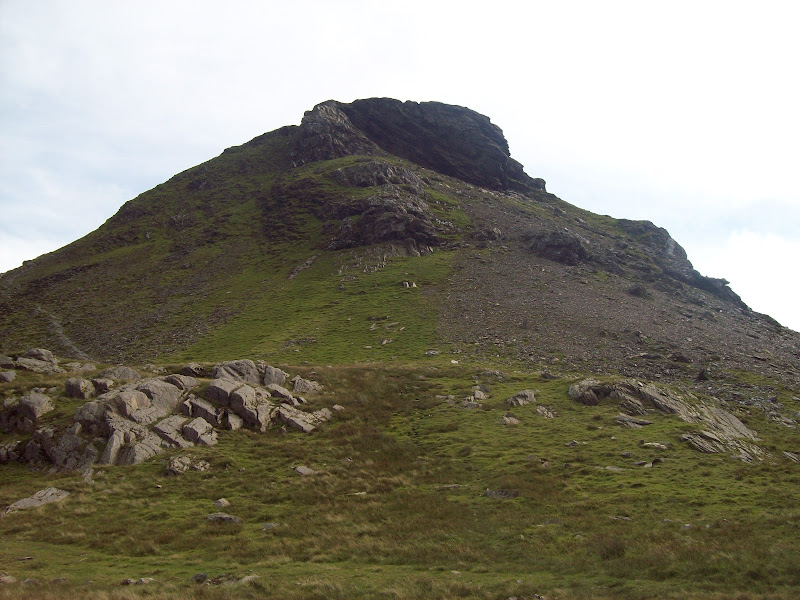 Steep grass took me to the summit of Moelwyn Mawr, which has a well-built slate trig point. I've always liked the look of the NW ridge of Moelwyn Mawr, as the initial section looks quite narrow, so I wandered out along it and stopped for a break above the cliffs. As it wasn't on my route, I retraced my steps and descended the north ridge instead, crossing a little pimple of a summit along the way. 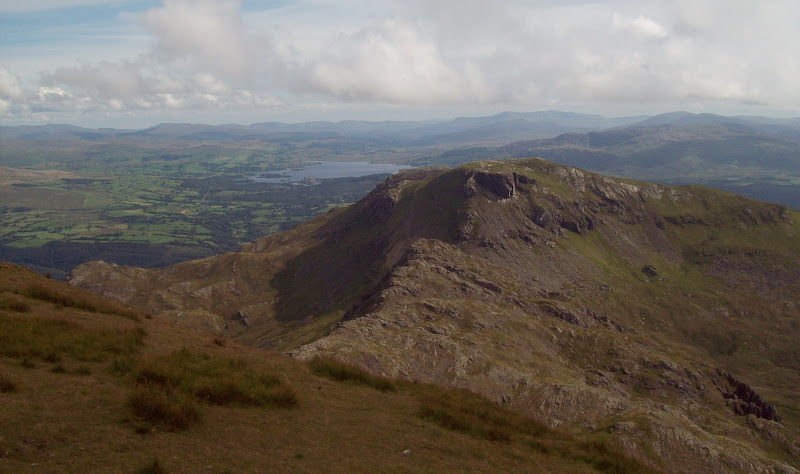 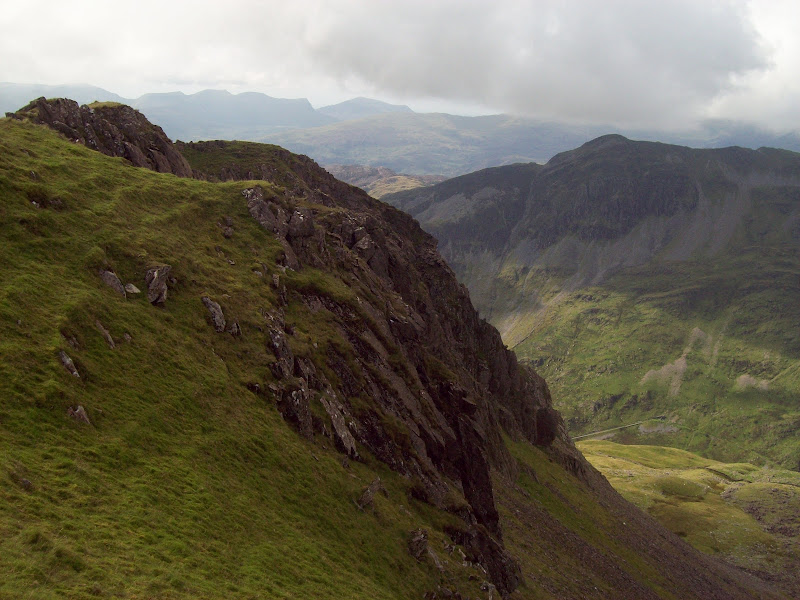 Back to Moelwyn Mawr along NW ridge: 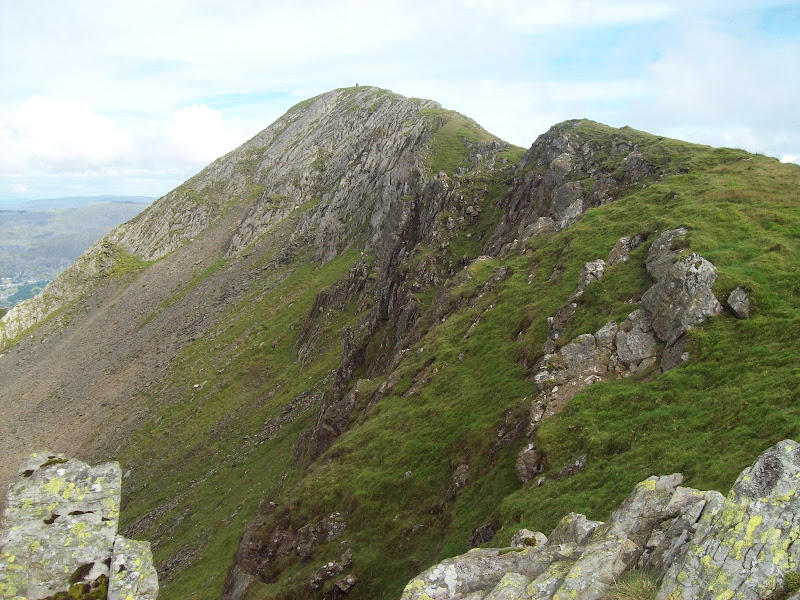 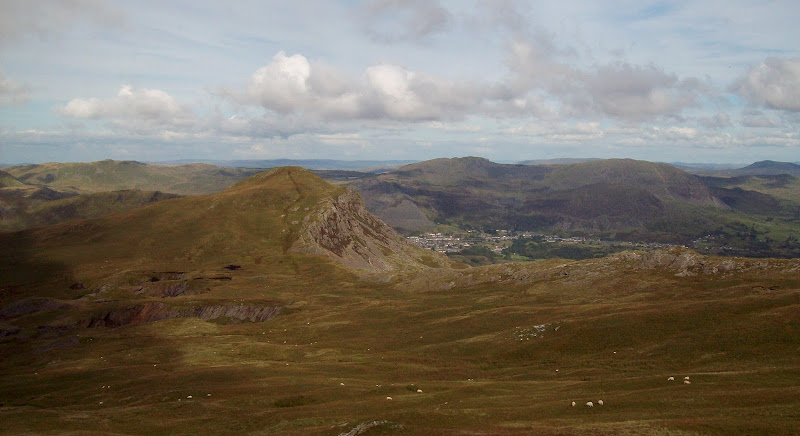 There was a little squelching through grass then a descent of an old tramway to lead me to the quarry buildings at Bwlch y Rhosydd. In fact this was mostly a reversal of our route onto Moel-y-hydd in January, which had also been a great day out. Crib Goch briefly popped out of the cloud. 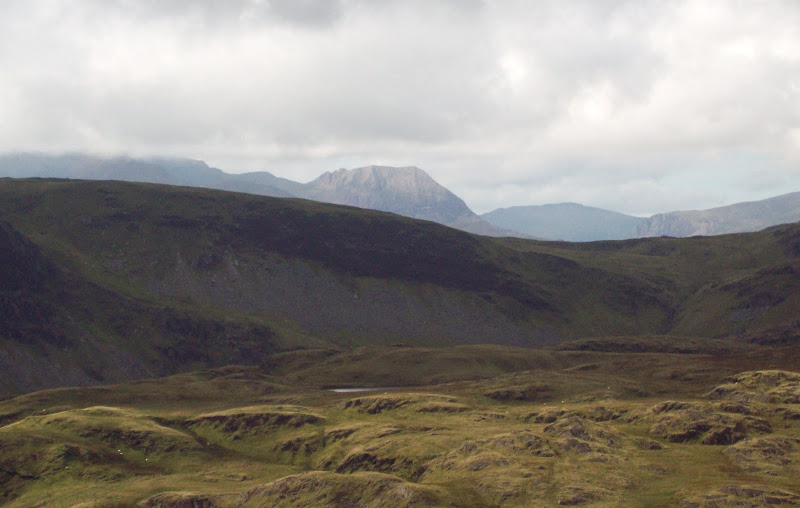 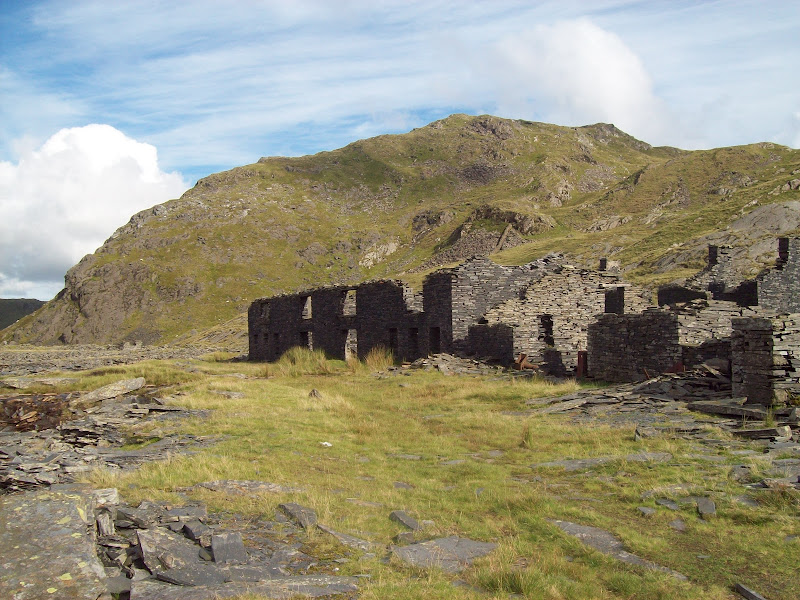 The sun went in for a bit now, and the path up onto the plateau NE of Cnicht was quite indistinct. I could however see the odd dirt-bike tyre mark on the ground. Back in the 90's, dirt bikes and scramblers in this area were an occasional problem. I couldn't work out if they still were, but none of the tyre tracks looked particularly fresh. A bit of winding around took me to the NE ridge of Cnicht, where I picked up a much more obvious path. The small lakes and outcrops in this area make for excellent exploring, and it seems to be a pretty regular wild camp spot for Mountainstar. 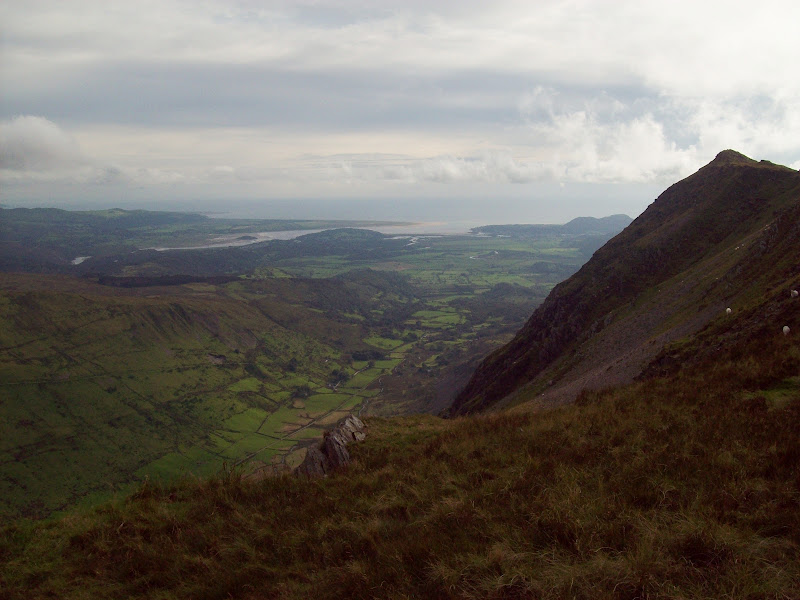 Up onto Cnicht, where I arrived at the summit at exactly 6pm, and had it to myself. I could see a couple ascending not far below me though. 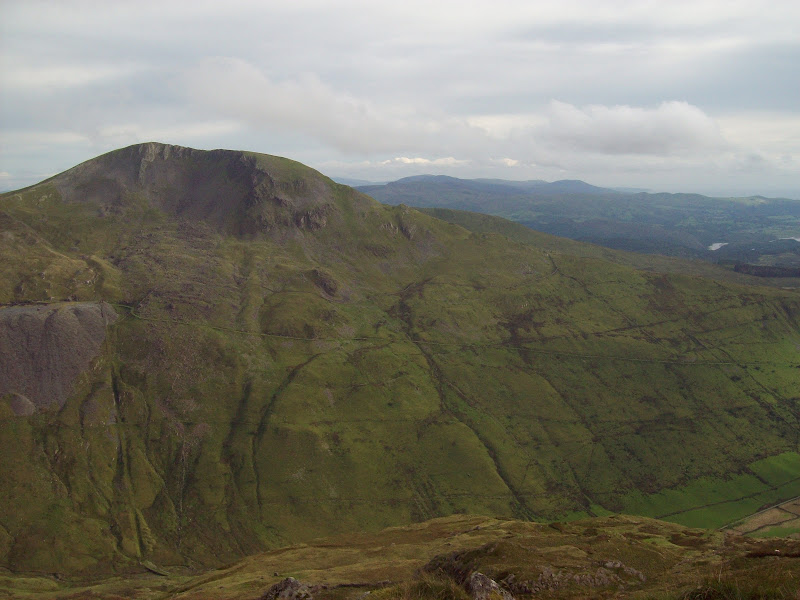 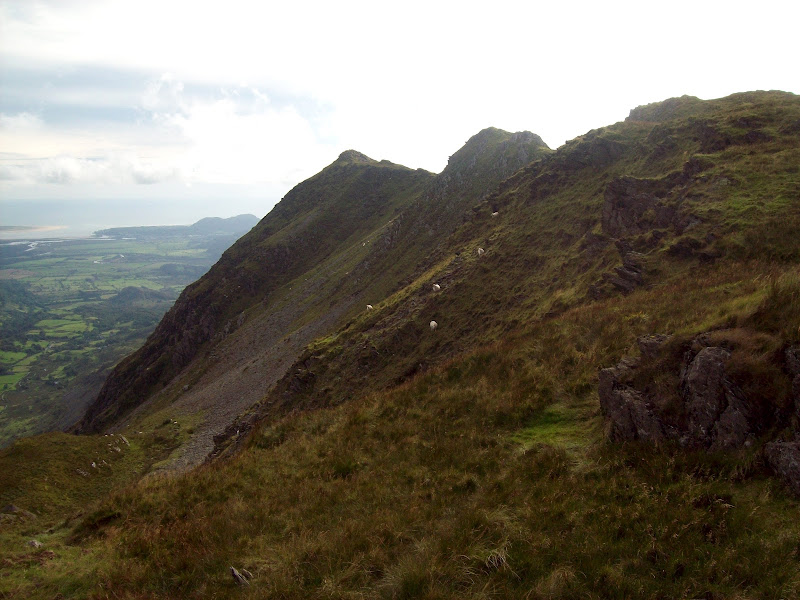 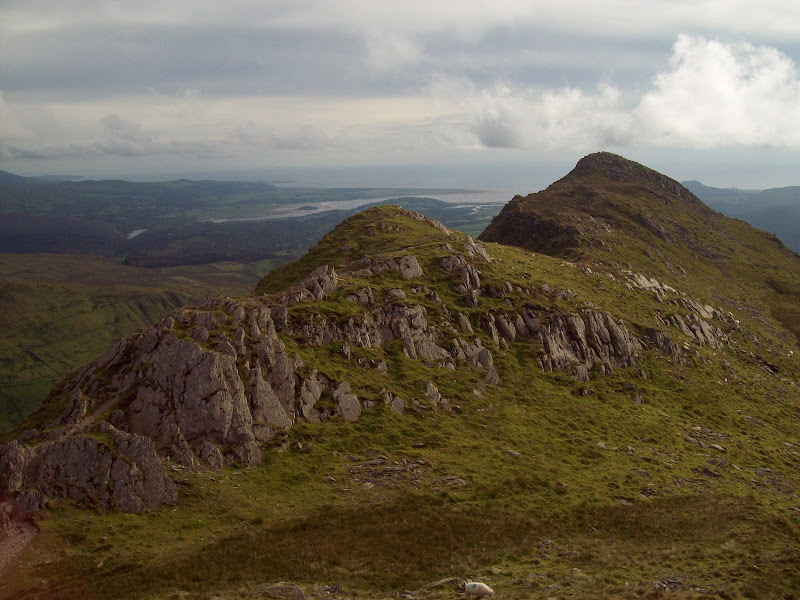 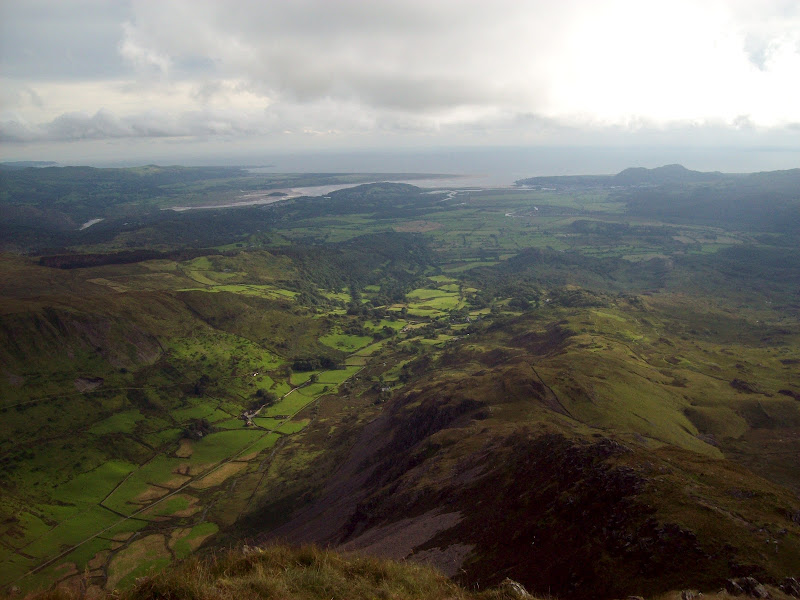 There is a little bit of a scramble on the descent of the SW ridge of Cnicht, which is where I passed the couple ascending. Then it was a pleasant stroll down the rest of the ridge, and I eventually bumped into my parents having a break lower down. They had just been up and down Cnicht the same way, and spent a good half hour on the summit. I joined them for the 20 minute wander back to the car.

Moelwyn Mawr on descent of Cnicht: 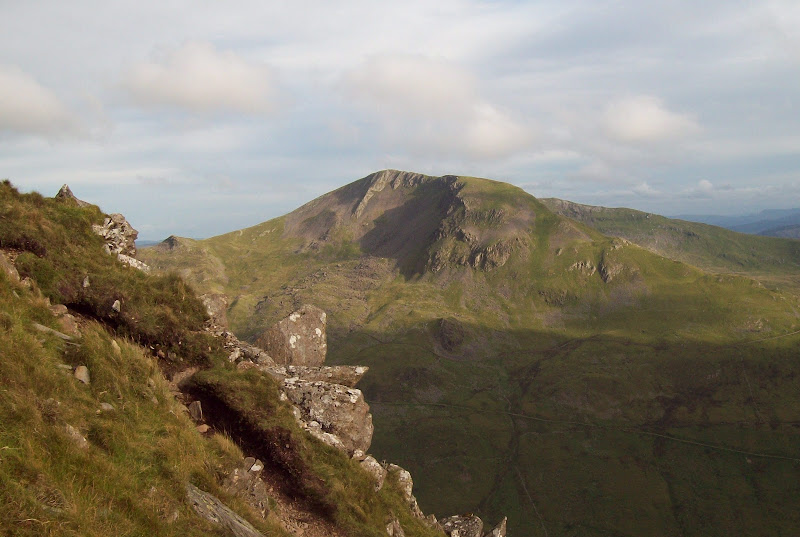 Scrambly section on the SW ridge: 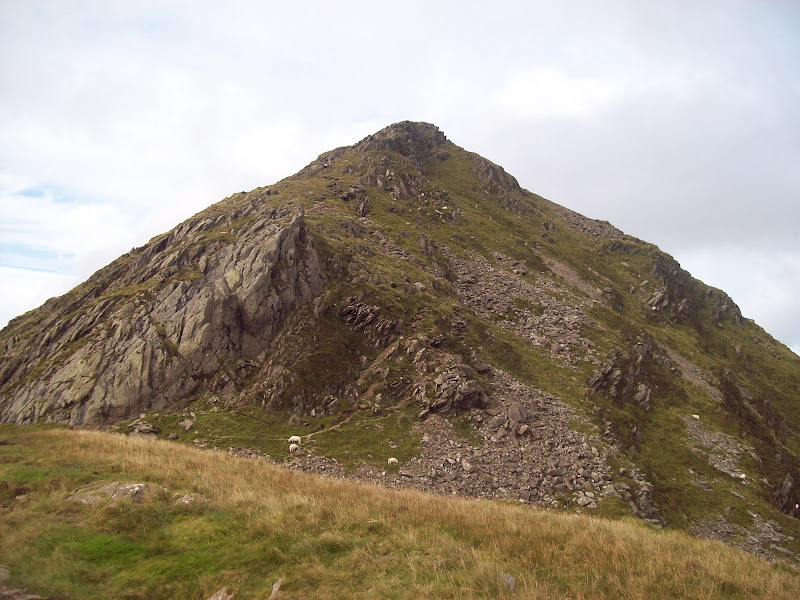 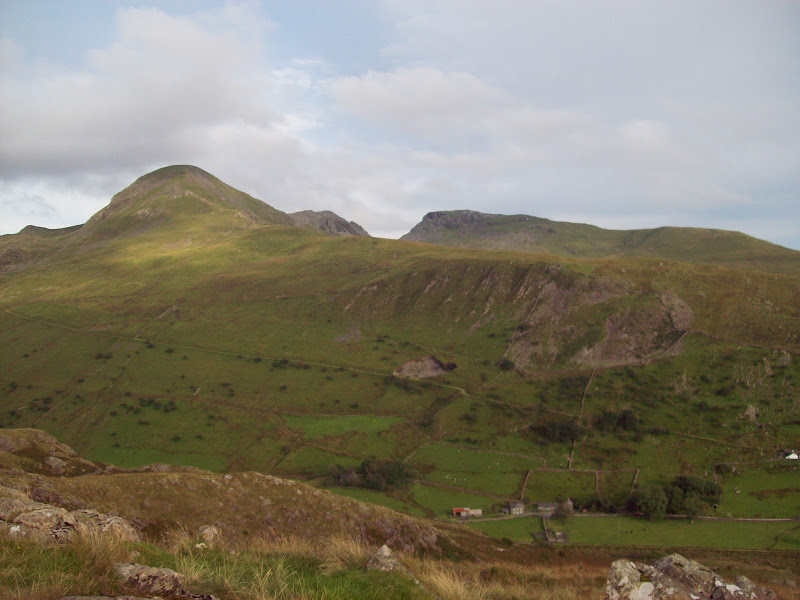 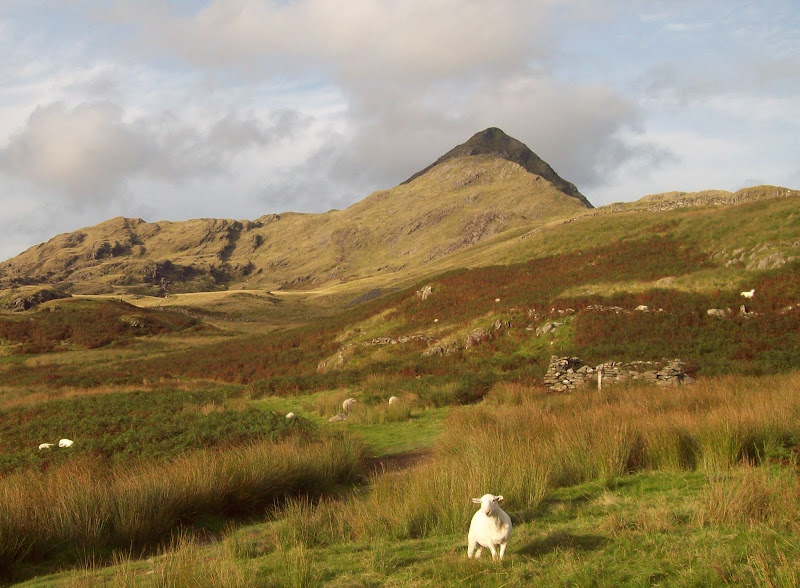 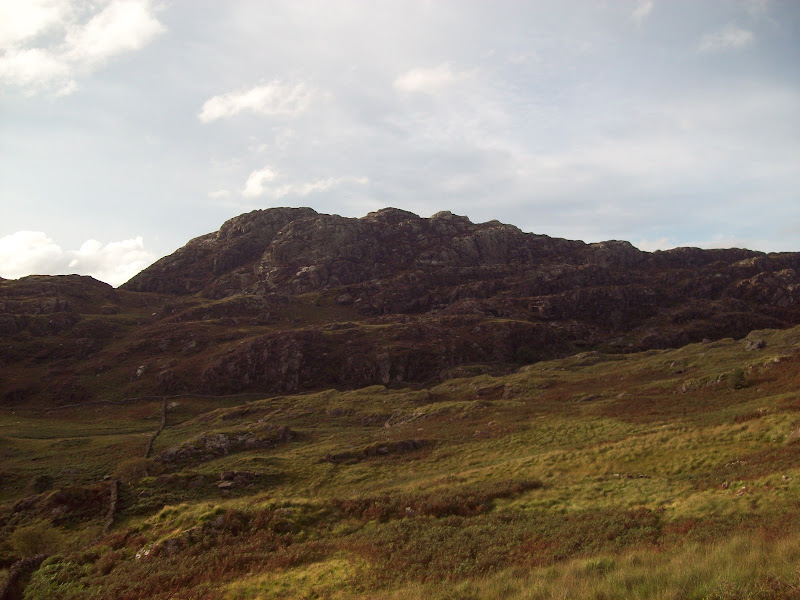 We then went off in search of a pub meal, eventually finding somewhere in Beddgelert. August bank holiday is probably the busiest weekend of the year in Snowdonia, so this was no mean feat without a booking! I had hoped to get out on the Monday too, but the weather was pants. Still, since I was officially supposed to be working from home on the Monday, this was probably a good thing

An absolute beauty Malky, lovely hills throughout and those views are spectacular. Great photos all the way but the ones showing the estuary make me yearn for a home visit

Nice wander Malky and some great photo's too!!

I think by the time your 50 you will have covered every blade of grass in the UK ...well if you don't get cramp like Monty

A good variant of that walk and not that much longer is to include Moel-yr hydd, Allt-fawr, Moel Druman and the three Ysgafell Wen tops. That way you can bag 12 Nuttall tops on a 12 mile/1450m ascent walk. Tricky in the mist though.

dooterbang wrote:I think by the time your 50 you will have covered every blade of grass in the UK

...by which time a load more will have grown and I'll need to spend my retirement going round the lot again

Owen b wrote:A good variant of that walk and not that much longer is to include Moel-yr hydd, Allt-fawr, Moel Druman and the three Ysgafell Wen tops. That way you can bag 12 Nuttall tops on a 12 mile/1450m ascent walk. Tricky in the mist though.

Was thinking of adding Moel-yr-hydd in but I was only up there a few months ago. It never occurred to me to do the others from here - I picked them up in a rather long and winding route from Blaenau instead.

Excellent stuff, and a report that takes me back quite a few years when I did this route but the other way round.

Your pics are far better than mine were!

Spent a couple of years staying at Criccieth and then camping at Morfa Bychan another twice; this was back in the 1960s so would have been very different then and probably not so many people out walking