Got ready in the car park at Inchnadamph. It was the sort of day that the weather could have gone either way, but I expected a cold wind chill up top, so was prepared for that. It was very pleasant start to the walk following the road which became a rough track crossing the river where someone has built a stone tower on the little island. The sort of thing that crops up a lot these days in mountain areas. 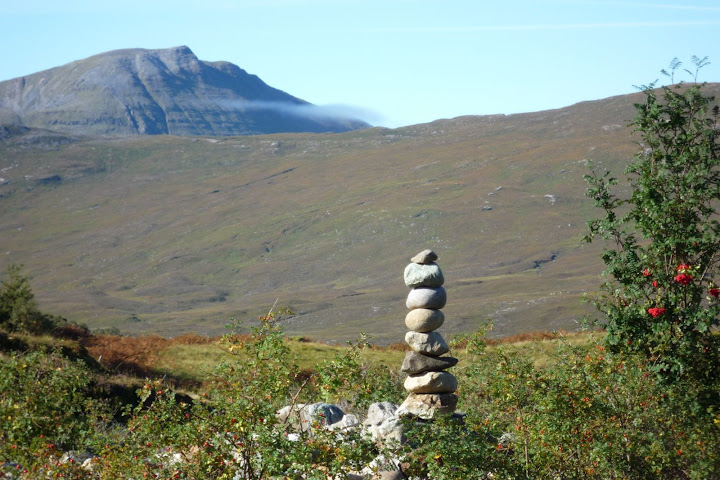 From here we followed the track past the house at Glenbain. We noticed they rented out a small building for holidays.
Great location for walking holidays, but it looked quite run down and had a tin roof (great on a rainy night

From here we continued and followed the River Traligill. There was some fantastic big dragon flies, but it starting to get hot and I was getting concerned about the midges - I'd forgotten to put any Avon Skin So Soft (this holidays anti-midge discovery).

After a while Conival came into view with a great white cloud skirt. 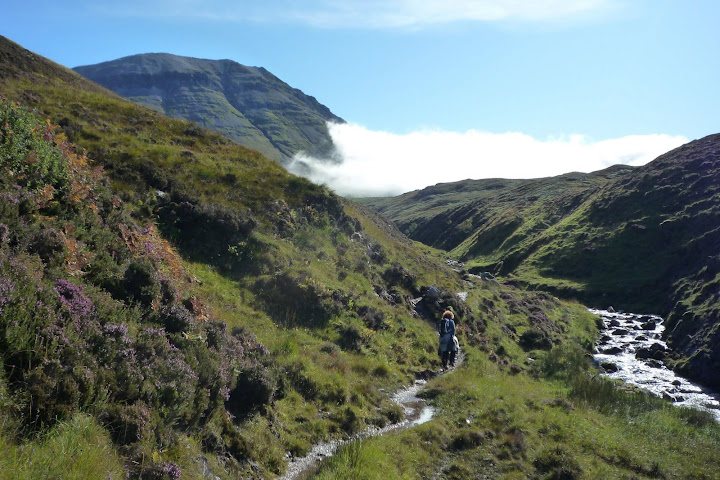 We carried on and turned off to the left to begin the ascent, the very start of which was very boggy! But after a while it was reasonable. We followed the river (Allt a Choinne Mhill) up hill, keeping to the left of it. The weather was getting hotter, but luckily with a slight breeze (and guess time of year) the midges were not too bad. 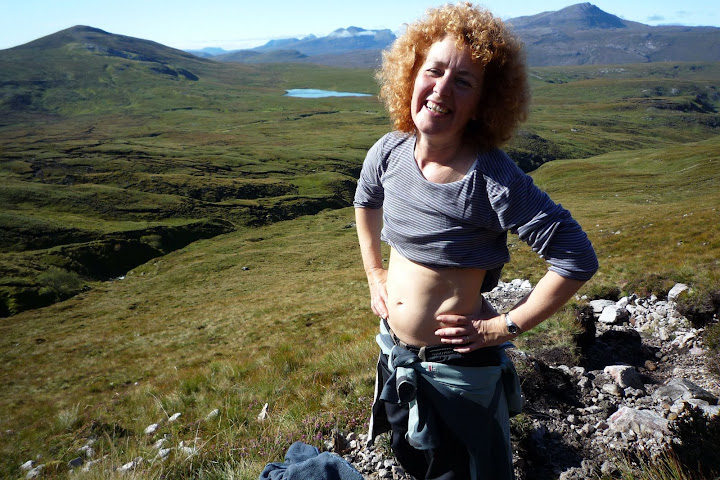 As we neared the top of Allt a Choinne Mhill we crossed over the river and saw our first people of the day - three people from the Borders - having a picnic on a rocky outcrop overlooking the river. After a brief chat we carried on up, keeping to the right of the river. There was a short steep section, but nothing technical, after which it was a gentle incline up to a fantastic view over the other side of the range with a cloud filled valley. 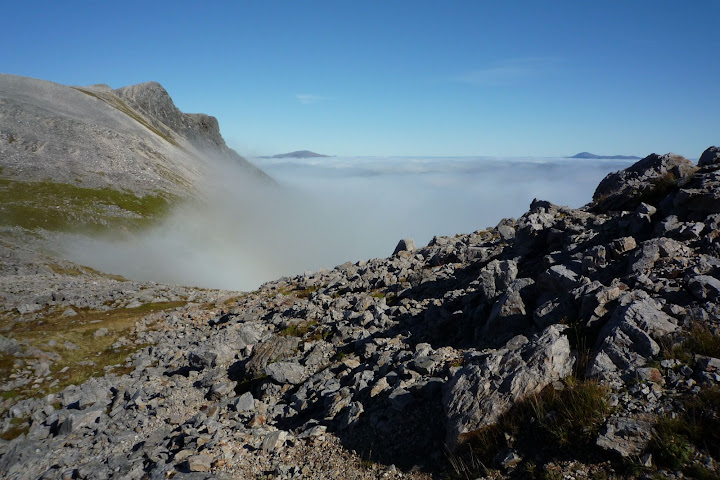 Time to take in the views before the final ascent up Conival. On the way up to the summit there were some fantastic views. 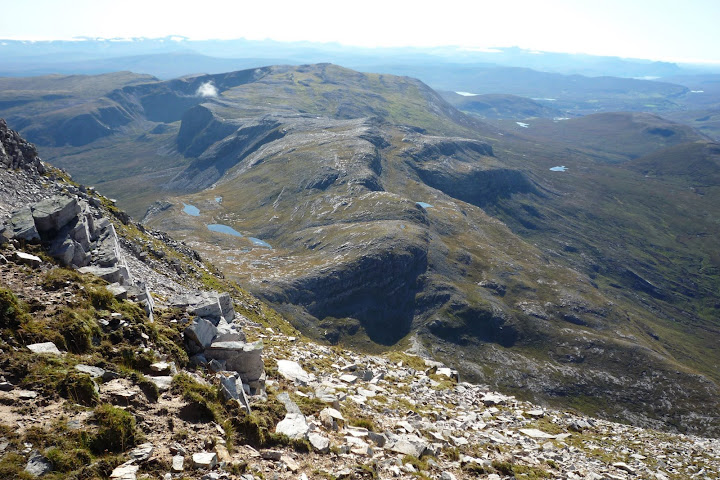 Once we got to the top we spent some time taking in the great views.
Here we are at Conival Summit shelter. 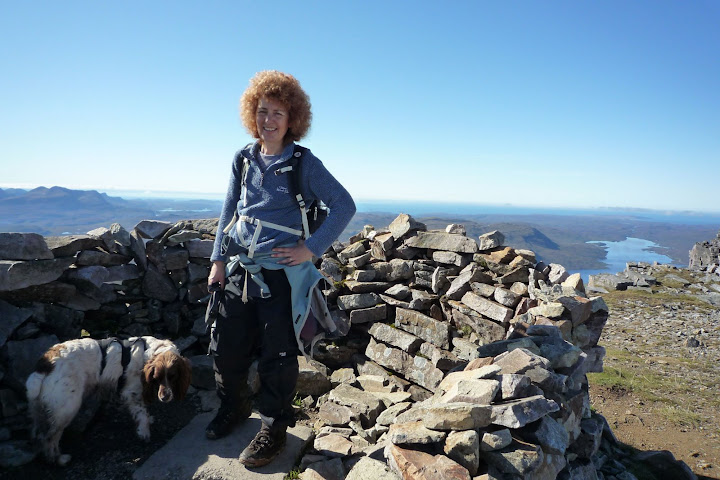 From the top we could see way over to Loch Assynt and Point of Stoer (where we had been walking on the day before). 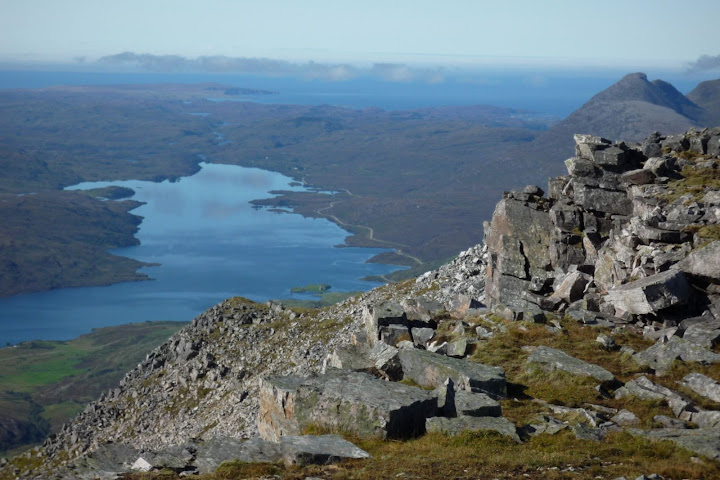 We didn't stay too long on top of Conival we wanted to get over to Ben More Assynt . Looking over to it the ridge looked fine although rocky. 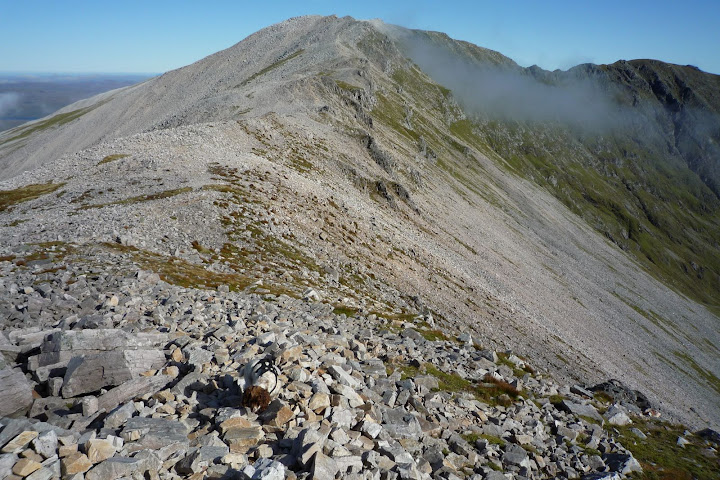 Well the ridge isn’t particularly dangerous, narrow or hard, but as it looks, it’ very rocky – even for experienced mountain hounds! It’s like a lunar landscape. I bet it’s not much fun on a wet or icy day – plenty of opportunity for accidents then! We met two more people who were on their return leg – they weren’t enjoying the rocks much either! 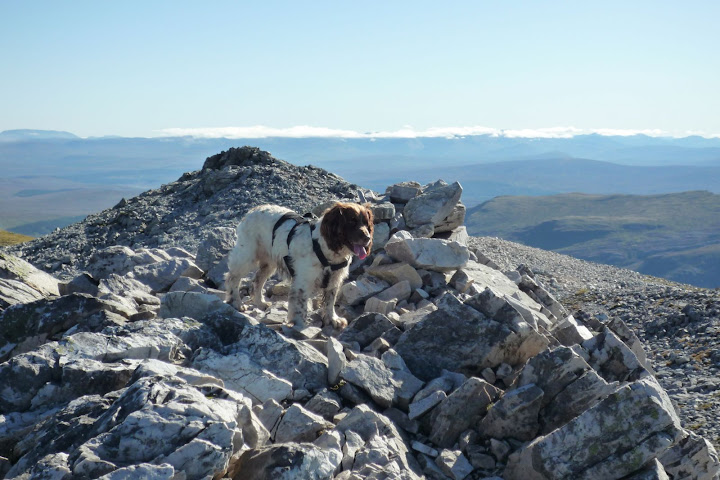 You go up and down a couple of times before the final ascent to Ben More Assynt.
Some people find it quite tiresome, but I wont mention any names! PersonallyI find it starts off as a bit of fun, but they after so much it does get boring.

Once at the top of Ben More Assynt, again we had fantastic views 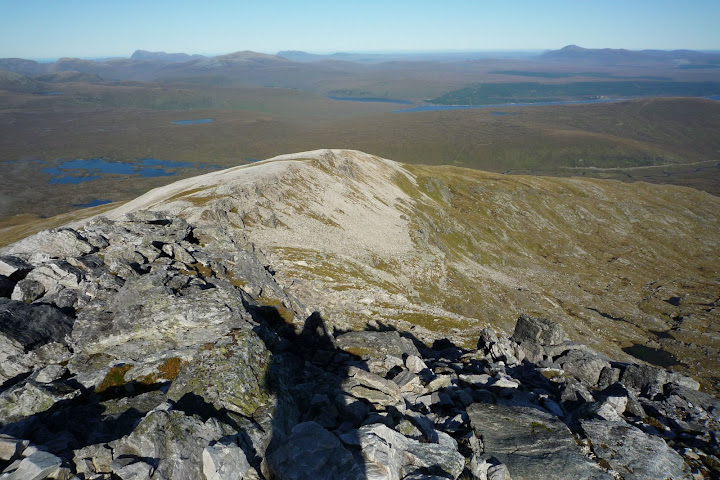 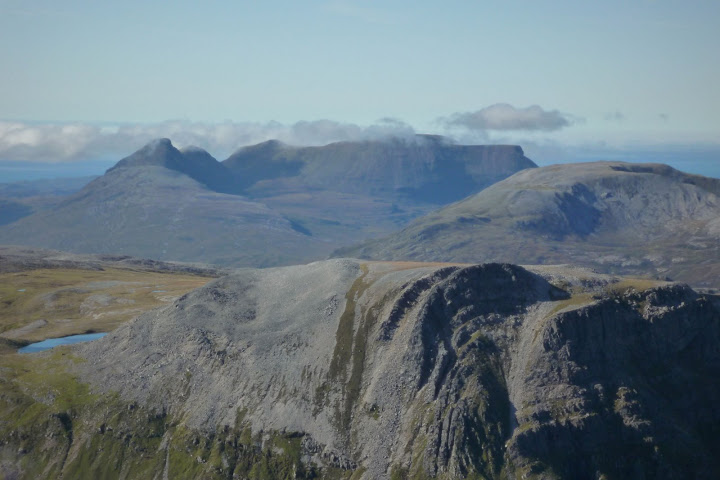 Looking back over the ridge path back to Conival, somebody wasn’t too happy about the up & down rollercoaster over the lunar landscape – our route back. 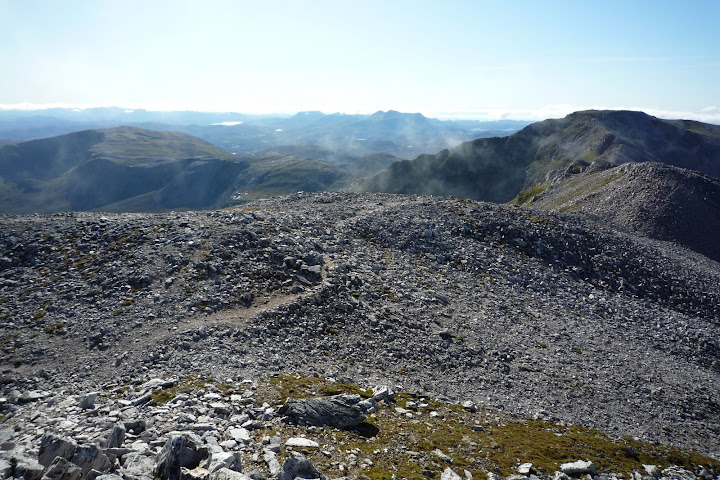 Once we had got back to Conival it was a straight forward journey back. However
We unknowingly took a slightly different path to rejoin Allt a Choinne Mhill at the top. This other path was a bit of a scramble for quite a few feet - going up on the other path wasn’t a scramble at all. If you’ve problems with scrambles watch out for this part - the easier path is slightly further north.

As we followed the River and track back to Inchnadamph we were passed by two power walkers sprinting along with their Nordic poles. So only 7 people seen all day – it’s so nice to have the hills virtually to ourselves!

It did seem like a long trek back, but I think that was due to the heat and ups and downs of the rocky ridge – but in all a fantastic day!!

Great report there Snoopy - some stunning pics there

- looks a perfect day in a great part of the world.

You can get more people to see them either by uploading the pics directly to Walkhighlands (using add photograph), or by linking to the image file rather than the page on Picasa (to do the latter, go to the photo on picasa, right click, properties, then copy the filename of the photo on the web - something .jpg. Then put your cursor into your post, press IMG to make two tags appear, then paste the .jpg filename from Picasa. When you submit the post your photo will be shown directly instead of a link.

This looks like a great trip Snoopy, you've peaked my interest in this route, nice report!

I'm gonna have to wait till the weekend to see this one as work's PC won't let me load photos from there...

Updated with image links as suggested by Paul.