Munros included on this walk: Sgurr Fiona (An Teallach)


Fiona has been in my life for quite some time now. Until recently however, I had only admired her from afar, longing to get to know her, yet resisting, settling on studying her from a distance, admiring her shape and form. I have spent so many hours gazing towards her. She has always been there in my life, usually in the background, watching me, tempting me, teasing me, daring me to approach. I know of her reputation. She can be dangerous and has hurt many of her suitors. She is moody and unpredictable. She is undoubtedly beautiful and has many admirers, I am not alone in this, she has even been wooed by a Lord. Many are scared of her, or at least in awe. Others have underestimated her power, to their cost.

I was formally introduced several months ago by Clive who has loved Fiona himself, and her sister(!), for many years, having first been introduced by his father-in-law. Clive took me to meet her and my feelings for her only intensified. All my preconceptions were confirmed, and magnified as I was led to her and started to explore her inner parts. She was even more beautiful and magnificent from close up. On that occasion she had been benevolent and let us get to know her and enjoy her and her beauty, both inside and out. Even as we left her presence I knew I needed more, I wanted more. I looked back and promised I would return, soon.

I now had an opportunity to meet her again, this time alone. A stolen, unexpected weekend. I knew there would be pain, yet without the pain, could there be such intense pleasure.

To protect us both I felt we needed a contract, stating our boundaries. This was unwritten and unsigned but agreed, at least by me.

I agreed that Fiona may cause me some pain and soreness, but must not leave any permanent scars. She must not push me beyond my comfort zone, although her mood may change during our encounter. It was my responsibility to take precautions, to choose her in her best mood.

In return I would treat her with respect, and not leave any scars or marks upon her, using no sharp implements or instruments. Nor would I take anything from her. I would not try to push too far, or accept I may get bitten in return if I tried to stretch the agreed boundaries. If I felt unsafe I could stop at any time.

I started from near the safety of the rescue post. The irony was not lost on me. Here, at the start so safe, yet soon I would be in a place of great danger, of peril.

I twisted and turned, following the way so many others had taken before me, as I worked my way into Fiona's hidden delights, heading in, and up, higher and higher, some times steep, at other times gentle, but always up.

As I rose I felt a thirst welling up from deep within me. Fiona's sides were moist, with rivulets running off her. I paused and knelt down besides one, cupping my hands and dipping them in. I brought the cool liquid to my mouth and drank my fill, plunging my hands into the refreshing fluid again and again, until I could drink no more. Sated, I now had the strength to continue and push on, higher and higher.

My legs ached as I made my way onwards, yet the pain was not so intense for me to want it to stop. It gave me a satisfaction to know that my legs were working well and the aching was just my body's way of telling me that things were going well. Could I continue? Yes, I knew I could, I must.

The sun beat down on my naked arms, my skin tingled under its constant glare, it’s surface reddening as the rays bore down, burning me. Fiona's mood was good and benign today, yet I knew I must still take care, she has hidden secrets, hidden dangers which must not be ignored. One careless slip could have disastrous consequences. I remembered our contract. Keep safe, do not go beyond our agreed limits

I rounded the side of Fiona's sister. She will have to wait. I have plans for her later, in years to come, if Fiona would only give me the chance.

Suddenly Fiona opened up in front of me in all her magnificence. I stopped momentarily, a fear rose up inside me as I gasped at the sight of her. I knew I must fight it, not be put off by her plunging depths and stark, bare features. My legs were shaking in anticipation as I approached her inner sanctuary.

I rested in the dip between the two peaks, summoning up my courage and strength. Nearly there, not much more pain now, it will be worth it.

I knew the end was near, with every muscle straining and pulsating I kept on pushing, pressing my hands against her at times to steady myself. Up, up forever up, push, harder, faster, I'm nearly there and then, almost unexpectedly I came, I came to the point where I could go no higher. I was now on top of Fiona. She lay beneath me in all her magnificent glory, yet keeping perfectly still. She was calm, quiet, and even appeared to be unmoved by my efforts. I suspected this was her way of telling me who was the boss, who was in charge. There was no doubt about that. I had only reached where I was with her permission. If she had not wanted me I would have been refused entry. I collapsed, exhausted yet so satisfied. The pain seemed as if nothing. Without the pain would the satisfaction be so intense?

As I lay upon her, breathless, I gazed around. I marvelled at the multitude of colour. The green and brown of the heather, the reds and pinks of the flowers, the blue of the sky and the water shimmering deep below, the different hues of the rocks. There were so many shades of varying colour, even grey, maybe fifty shades in all.

I descended down to reality in a daze and, as I left her, I knew I would never be able to look upon Sgurr Fiona in the same way again. 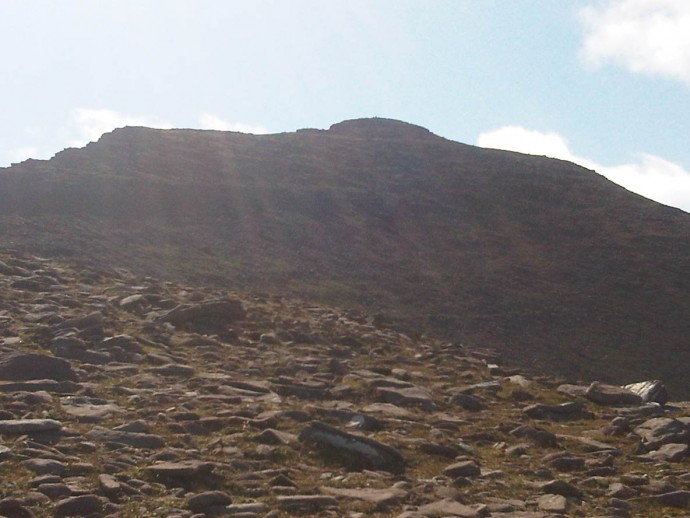 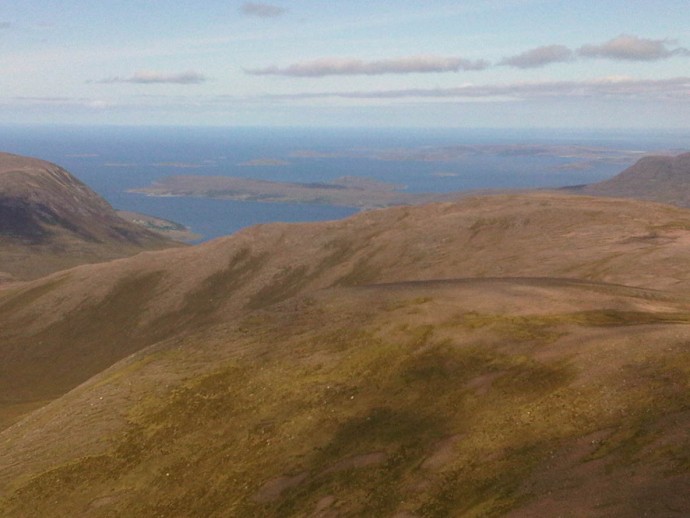 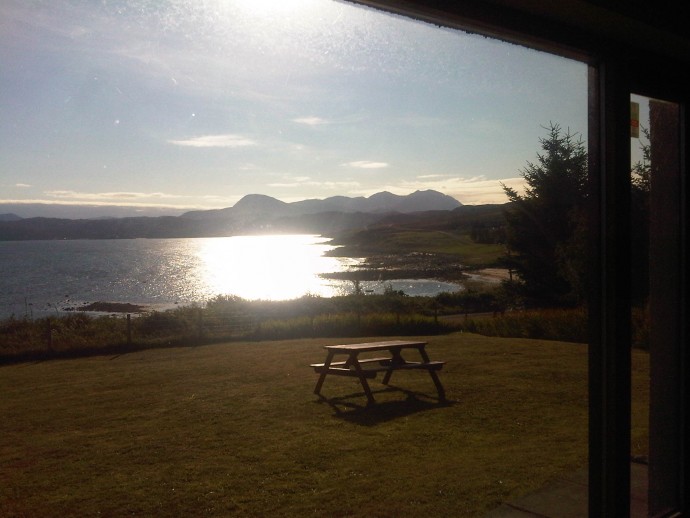 OMG! Hilarious! Sorry if it wasn't meant to be but I'm crying with laughter at this. Ever thought of writing a book? LOL!
Some great photos too.

That's a hilarious and brave piece of writing

I was watching a documentary about this hyped up '50...' a few weeks ago, and it turns out that Ann Summers sales figures have gone through the roof recently because of it, and they are reporting a huge increase in demand for n*pple clamps

...I wonder what demand increases Tiso will report once every reads your TR

Most enjoyable reading, better than any short novel from the top shelf (not saying I've been there)

Glad it was such a good day for you.

Definitely get my vote for report of the month.

Superb pics, got a touch of vertigo looking at that one of the ridge to Berkeley's seat


Nothing Grey about your photies either!!!!!

Perhaps I was wise not to mention the part of the contract which stated that I would not take any animals to Fiona, but she could bring goats and sheep!

Not sure if I will be able to do a sequel Polly, the kids have banned me from ever putting a walk report on the site again, the shame and humiliation I have brought on the family, oh Dad, how could you?

Great idea Keith and perfect execution, got to say I think your version is a step up from that crappy book

and your has even got pictures

I trusted you and took you to meet her. Not only did you two cheat on me, but you have told the world about it! I'm shocked and dismayed at the shamelessness of it all.

Brilliant stuff! Mountain erotica - that will be a new one for Waterstones.

Very well written Keith; I couldn't wait to reach the end just to make sure you reached the pinnacle without having to resort to some nifty rope work

Never mind what the kids thought, what did your Mrs think?

Laters babe, did you have a grey tie?

clivegrif wrote:I trusted you and took you to meet her. Not only did you two cheat on me, but you have told the world about it! I'm shocked and dismayed at the shamelessness of it all.

I just couldn't resist her charms. She made me do it. She is much bigger and stronger than me (not to mention better looking). I hope you can forgive me.

clivew wrote:I couldn't wait to reach the end just to make sure you reached the pinnacle without having to resort to some nifty rope work

Johnny Corbett wrote:Never mind what the kids thought, what did your Mrs think?

The kids are mortified. The Mrs(!) was quite amused, I must say she does prefer vanilla walks, not so keen on the scary stuff

margaret2205 wrote:Laters babe, did you have a grey tie?

(see below re the tie

Thanks to everyone else for all the comments. I'm not quite sure where I'm going to be going for my next walk report. I don't know if I can top this one.

I must say I did enjoy writing it

I'm thinking of changing my Avatar, what do you guys reckon?
Not sure how many copy-write infringements are going on here! extra points for identifying the tartan