Saturday was the poorer forecast so I planned to do the Glyder loop adding in Tryfan and leave Snowdonia for the better day on Sunday. rain bouncing as I set off can't see far but good path ahead so all is well :)

Thinking I should be coming up to a lake soon my heart sank when I figured I'd misread the map as I could see what looked like a drop up ahead... managed to stop with a few paces to go when I realised this was the lake! Went round the lake and found the path again, constantly checking navigation, taking bearings and walking on the compass. Took 2.5 hours to reach the summit of Tryfan peeking over the edge of Tryfan, could hear voices but was a few minutes before I saw anyone else

Picked my way down the rock field and navigated across to pick up the path heading for Glyder Fach to continue the loop. Already thinking I wouldn't get the full round done though as this was taking way too long

I figured I'd take the exit path down through Devil's Kitchen. Getting later still (so much slower when you can't see where you're going!) I decided to miss Glyder Fawr and take the first exit path down Y Gribin. Took a bit of to-ing and fro-ing before I found the path, which I soon lost again! Ended up picking my way down over the slippy crags and even more slippy mud, doing a backwards crab move with feet first facing forwards... lost my footing at one point and slid further than I meant to = bruised lump on my leg and even worse, smashed my compass

Then the clag started to clear and I could see where I was headed - not sure that was a good thing as I hadn't picked the easiest way down! phew! not the easiest way down! :D

Straightforward from here, followed the path and picked up the main route back from the lake. back at the lake, view to Devil's Kitchen good path back to the car park, I jogged most of the way :)

Day 2: with no compass and given that I'd made a promise to stay safe

I went for the Snowdon Horseshoe but followed the Pyg track, missing Crib Goch and the pinnacles. I know this is a big tourist attraction but was still surprised at the number of people, nervousness of some and attire of others - hats off to them all though

Up to Snowdon summit, now in clag then I carried on to follow the ridge over Y Llwedd. Views were clear by now so no worries being without a compass, I went for the scramble over this ridge and finished the loop on the Miners track

Car park at Pen-y-Pass had been full when I arrived, so I waited almost an hour for the bus back to Nant Peris - could have walked it quicker I'm sure, but I wasn't in a rush view over to path down at the end of my loop tops all clear at this point... felt like I was in a penguin parade :D no getting lost here anyway! 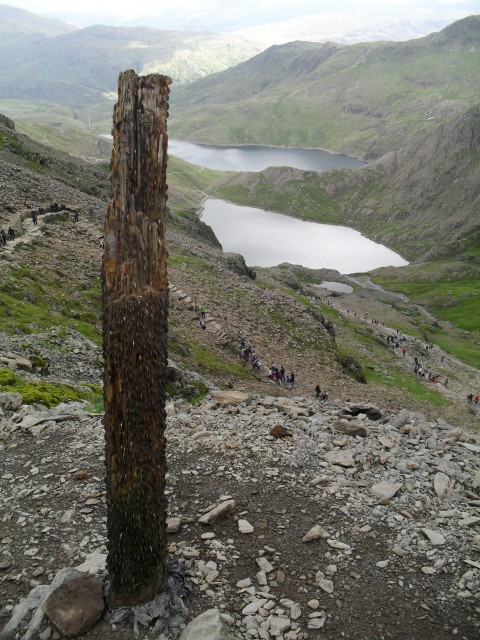 Snowdon summit now in clag - still no getting lost though! hardly any standing room up there (but I found a wee space!) down the scree and view cleared again heading for Y Lliwedd (told the guy carrying his bike this was most impressive lol!) path splits for the Watkin Path but I'm heading for those rocks straight ahead :) kept to the ridge line on the scramble up (safely of course!) view back to Snowdon, still in clag just looking - this isn't the way down! finish on a tarmac path :)

As if it's no hard enough staying in front of you, i'm gonna have to go to Wales too!
Glad your safe, it looks stunning down there

Drove past many of the Snowdon car parks on Sunday lunchtime - they were overflowing to bursting. Snowdon on an August bank holiday - no thanks!

Still, it's a pretty fine horseshoe. If you want it to yourself, you need to get up early doors

Great report Fi, that first day looked a bit miserable though with some dodgy bit too....I reckon you should have called it off and sat in the pub

. Glad to see day 2 picked up weather wise even if the lack of a compass made you take the incredibly packed trail you still made the most of the weather. Now you can get down to the store and get a new compass.....and it would be a shame to go all that way and not get a new top, and maybe some socks, perhaps just a look at the boots.............

Great report Fi and good to see a typical Snowdonia weekend - total clag one day and sun the next!

Great summary and photos-really enjoyed thanks.