Following much inspiration from “JohnKaysLeftLeg” reports I decided it was time to dust of the boots and get back to Mountain climbing. My 9 year old son was also desperate to climb his first mountain so we plumped for Helvellyn. The easier route from Thirlmere, “Not Striding Edge” my wife told me.
Arrived at 08:45am at the Whythburn car park next to the south bank of Thirlmere to find we were only the second car there. To think I was worried about parking. Weather was overcast and raining slightly but spirits were high for the walk ahead and hoping for a clear summit. Initial climb through the woods and onto Helvellyn is quite steep and took my breath away but didn’t slow down the young one.
Hurry Up Dad “Is that the Summit?” 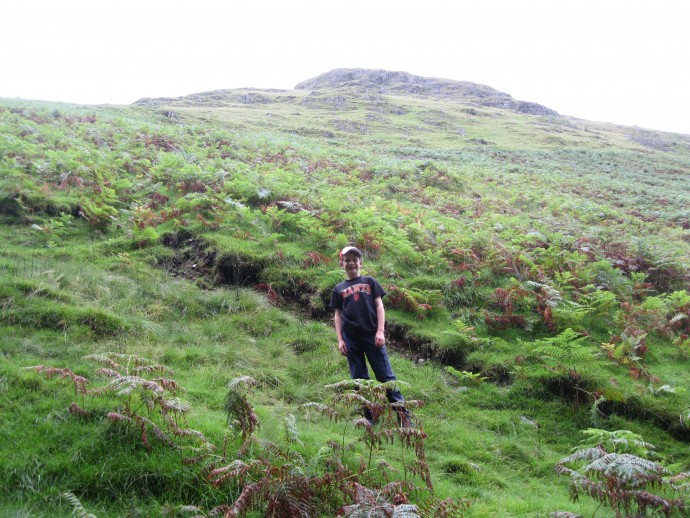 Climbing up to Comb Gill

Much fun was had on the way up through Comb Gill and climbing up Comb Crag with false summits claims. “Is that the top Dad?” – Nope I said with much delight on a number of occasions. However this is such a lovely flattish bit after the hard work at the start of the walk to recover before the climb up Comb Crag. Finally we reached the split in the path between Helvellyn and Nethermost Pike.
Here we got a fantastic view of Striding Edge. Always looks daunting from here but one day I hope to follow that route – Maybe when he’s older. One last pull to the top past the sheep and we made it and the summit.

Pose for picture above Swirral Edge and Red Tarn. 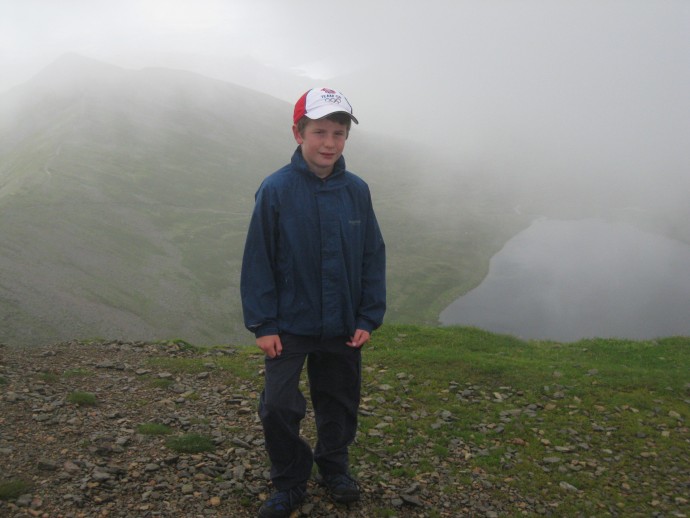 Stones placed on Cairn, Sandwiches eaten in shelter and photo at Trig point. All ticked off just as mist descended.
Helvellyn conquered so we headed off down the long stepped path to Swirls Car Park. However, on the way down I suffered a boot malfunction. My sole started to come away at the toe and then fell off completely. This made climbing down the damp steps very treacherous and fell a number of times.
In the end I ripped out the hard plastic inner sole and walked down with just the Gore-Tex inner and socks protecting my feet which was a bit sore at times and made it slow going.

At the bottom we admired the waterfalls before the 2 mile walk back to the car through the forest. 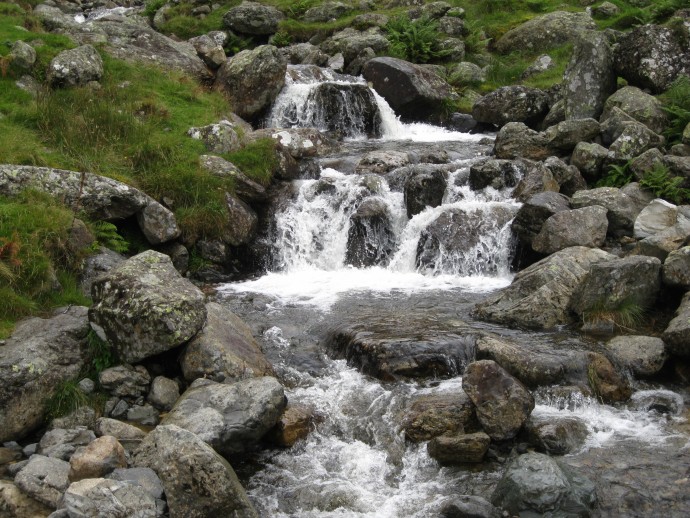 Even saw a red squirrel which made up for my sore left foot.

All in all a good day on Hellvellyn and Matty bagged his first Wainwright. Next he wants to do Scafell Pike (good ambition) but first I need to get some new boots.

Many thanks for the name check!

Great to see you getting back to the hills with your boy with you. As for the boot malfunction it puts my soggy foot on Snowdon into perspective. Oh and congrats to Matty

Great report MM, your lad looks less happy at the top....was he worn out

shame about the boot, never seen that happen before but at least you made it home injury free and with a good excuse to get down to the local trekking shop

ChrisW wrote:Great report MM, your lad looks less happy at the top....was he worn out

shame about the boot, never seen that happen before but at least you made it home injury free and with a good excuse to get down to the local trekking shop

Matty was very cold at the summit. He had loads of layers but I had forgotten gloves and his hands were freezing. For some reason I had hoped gloves werent necessary in the British Summer http://www.walkhighlands.co.uk/Forum/posting.php?mode=quote&f=16&p=154190#

My boots leaked on Consiton Old Man and I guess that meybe weakened the glue in my boots. So glad this didnt happen on the way up. Like you say though its a good chance to get some new ones. How are the Scapas going JohnKay?

MarkyMark10 wrote:My boots leaked on Consiton Old Man and I guess that meybe weakened the glue in my boots. So glad this didnt happen on the way up. Like you say though its a good chance to get some new ones. How are the Scapas going JohnKay?

Spot on. 54k and 4000meters of ascent so far and already worn in nicely.

Nice report MM and good to see Matty out there - no doubt he'll get the bug...well at least until he discovers girls!!

I also use Scarpa's and they have turned out to be great boots and good investment! Look forward to future reports!

And I thought i'd climbed Hellvelyn every possible way.
Its nice to see people take their young children up the mountains. Hopefully they will love the experiences and go on to become the next generation of mountain walkers.

If I ever have a child I will make sure I take them up into the mountains. Glad to see your lad enjoyed it so much!