The adventures continue....not 1 Munro but 5 on this wee outing!

We set off on Friday night and got to Lawers, we were meant to camp out for the night but instead ended up in the hotel as we managed to negotiate quite a good deal

Twin room for me, the wee guy and of course "Munro Marley", the DUG for the small fee of just £55 including breakfast! We got up early and headed out for the hill, we were aiming for Meall Greigh first. 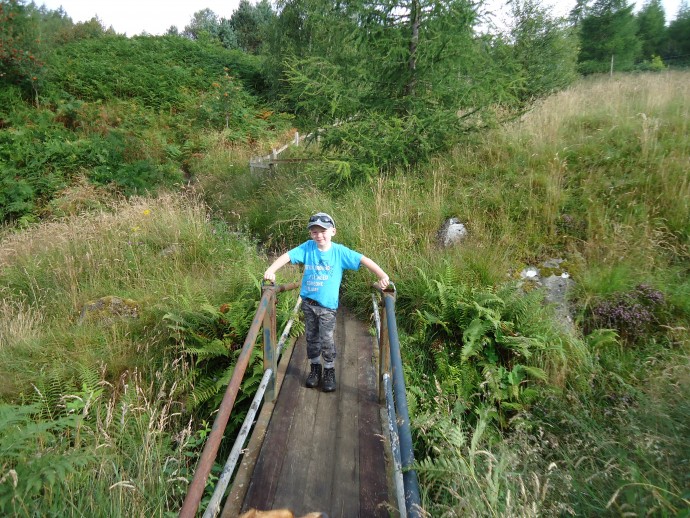 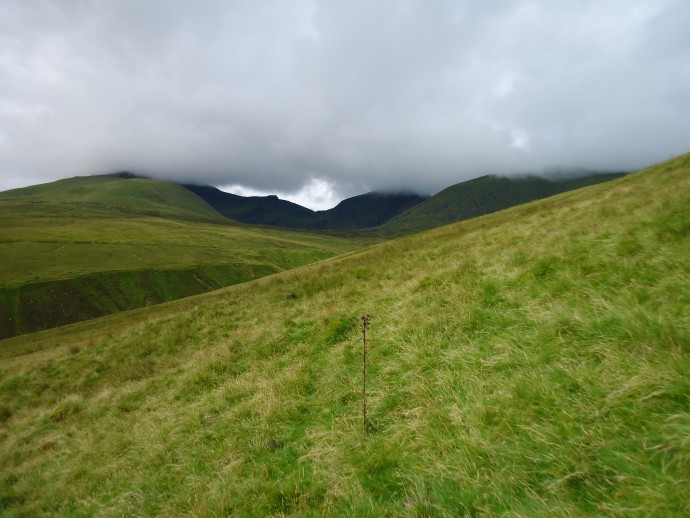 Looking across to Ben Lawers and An Stuc!

It was a strange feeling walking up grassy slopes for a change (boring, I think Kyle said), especially as our last outing was the Aonach ridge in Glen Coe. 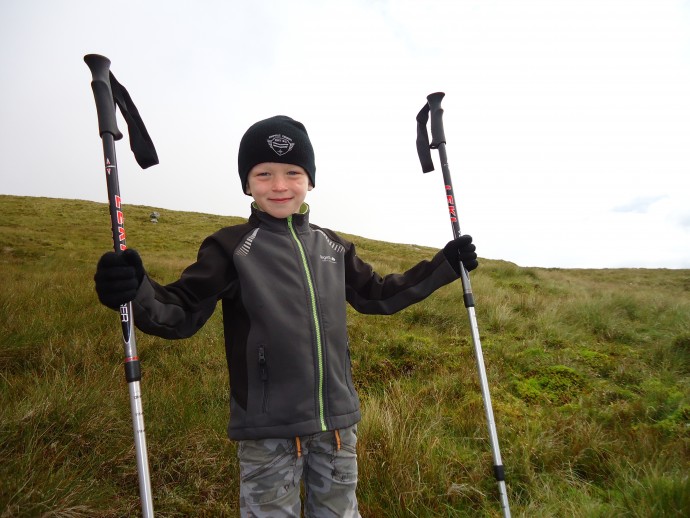 Think my poles are a bit big!

As we climbed higher the clouds descended, the wind built up speed and soon in was pouring down! The forecast was spot on. 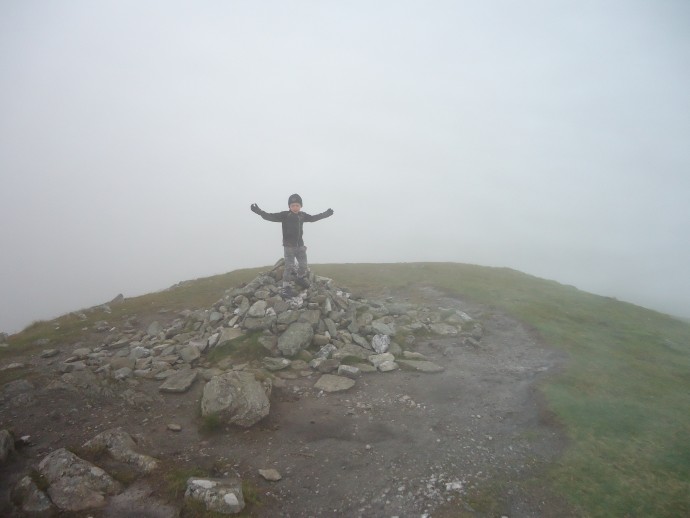 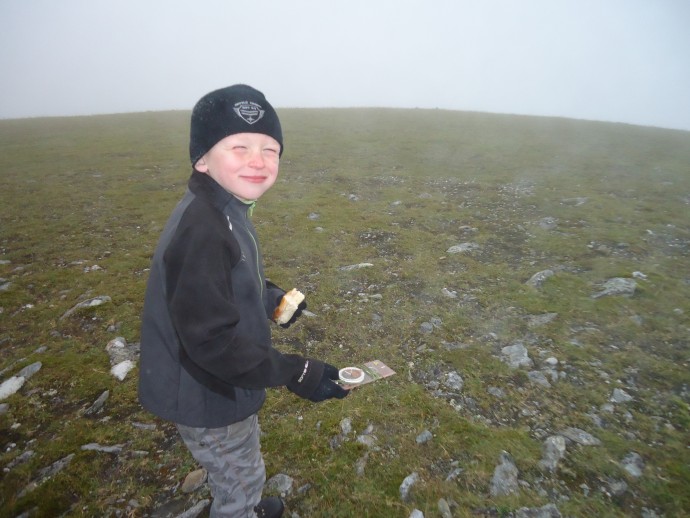 Only 6 and already following a compass bearing!

We had thought of doing 2 Munros and then heading down, given the wet weather! 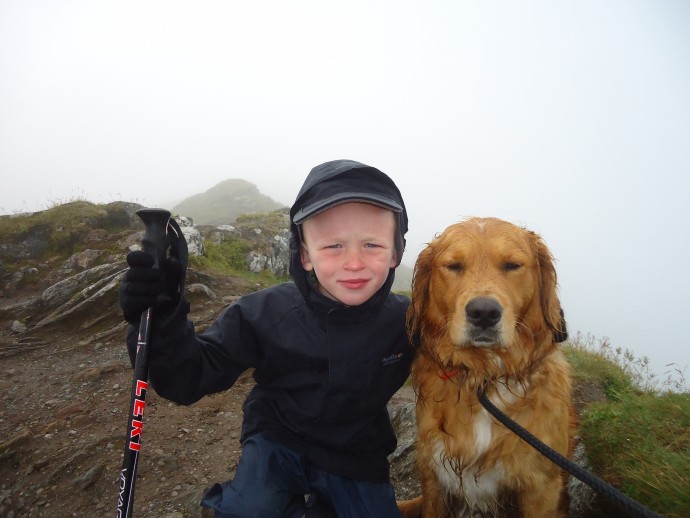 However once Kyle had got a glimpse of An Stuc through the clouds he said “dad, we need to climb that first before we go down”! 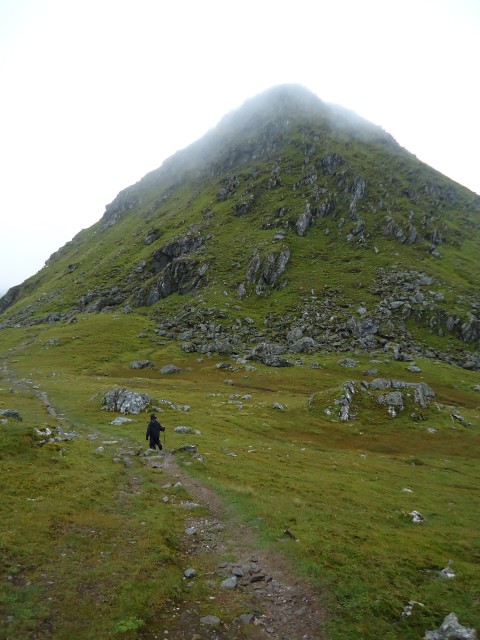 Marching for An Stuc! 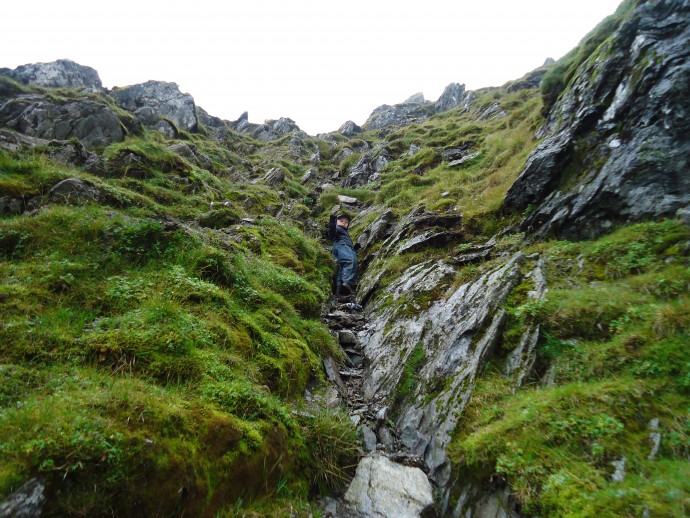 As the weather had begun to lift a touch and the views where improving how could I disappoint the wee guy, so we climbed it as well! 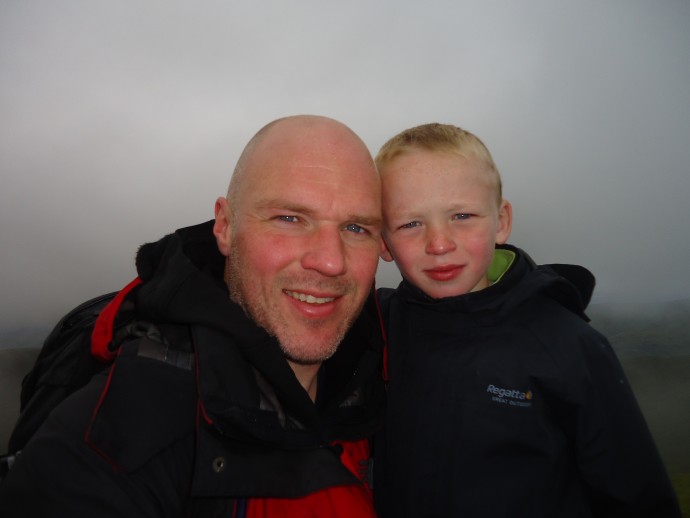 Me and Ma boy, An Stuc Summit!

By the time we reached the summit of Munro number 3, I thought it was time to head back to the Lawers hotel! But by now we could clearly see the mighty summit of Ben Lawers, Kyle said it looked big and when I told him it was the tenth highest Munro, he insisted we climbed it as well! 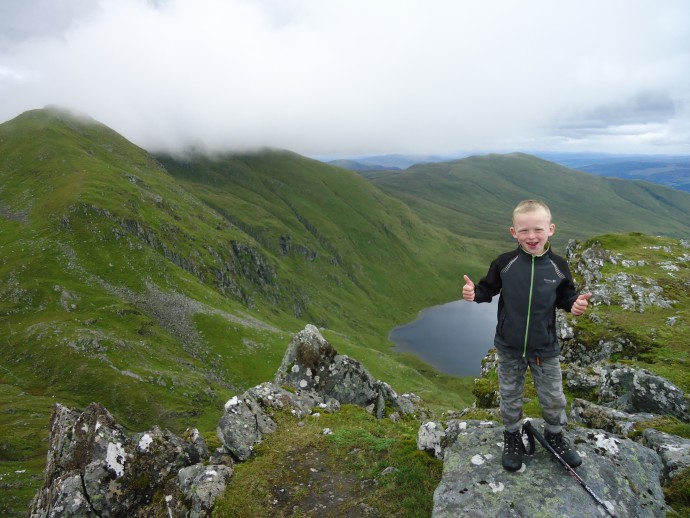 On the ridge towards Lawers!

Good god I thought, he is only 6! How is this possible, but he was adamant so we pushed on across the Creag an Fhithich and then tackled Ben Lawers, 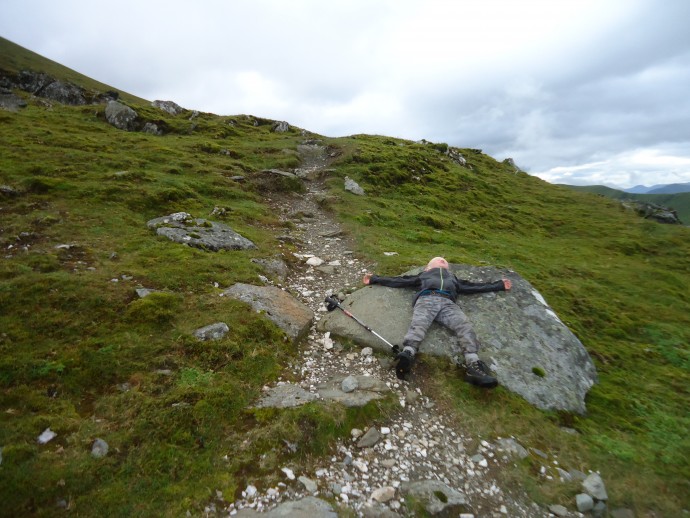 A wee rest on the way to Lawers summit!

Munro number 4 for the day! By now it was very clear, awesome views but very windy! 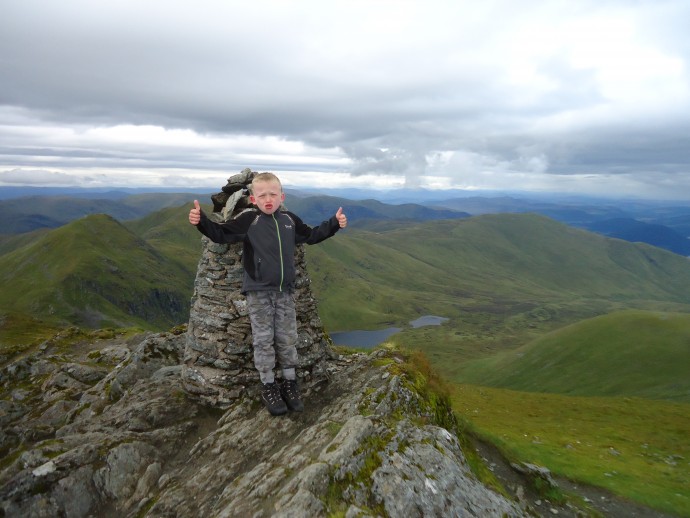 We met a couple at the summit of Lawers; little did we know that they would help us out later in the day! It was here that we had a decision, return back to Lawers slightly cross country and then follow our route up……..or push on over Beinn Ghlas and down to the visitors centre car park, which would mean a long walk back along the roads. Putting it to Kyle he chose the second of the two options which meant of course we hit that Munro number 5 for the day! 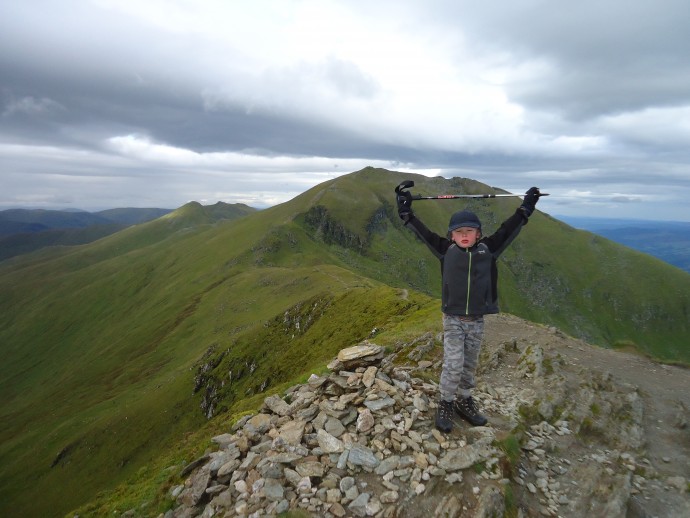 Magic, what a boy, what a day! We then headed down the hill relatively quickly, and soon arrived at the road! We had a quick bite to eat and took of some layers ready for the hike along the road, when…………the lovely couple from the top of Lawers stopped and asked if they could give us a lift! MAGIC! So they gave me, Kyle and Marley (the wet and smelly dug) a lift all the way to the Lawers hotel! THANK YOU again! To sum it up, 5 Munros in one day, what another adventure in the hills this turned out to be, lots of memories generated and I can’t wait to get out again soon!

Well Done to the little fella,

Planning on heading up there on Monday, so a good heads up, thanks
Pressures on to complete this round,

The "wee guy" certainly puts us older ones to shame

Heavens above can't believe that for a six year old

Does he ever get tired? Amazing achievement!

Hey Brian, thanks for the reply! Sounds like you have thrown the gauntlet down here!

I will put it to the wee man tonight and see what the response is!
Catch you soon and well done with your own success in the Lochnagar.

Stuart, Monty - thanks for the kind words!

Marilyn - your right, the pressure is on, good luck!

Thanks for the reply.

Fudgie - I know just how you felt!

Joking apart, we where looking at the 7 in Glen Shiel!!!

Oh and does he get tired! After this walk on Sat, he was up on Sunday at 8am, played footbal in a competion till lunch, so I guess not!!