I wanted to choose a cracker for my first post and there can't be much better than the Fisherfield 6 on a good day! I'm cheating really cos we started the weekend with a warm up on the western Fainnichs - but that'll be my 2nd post!

The main expedition began with an evening walk over from Corrie Hallie to Shenaval bothy, after some fortifying fish and chips at the Dundonnell Hotel. 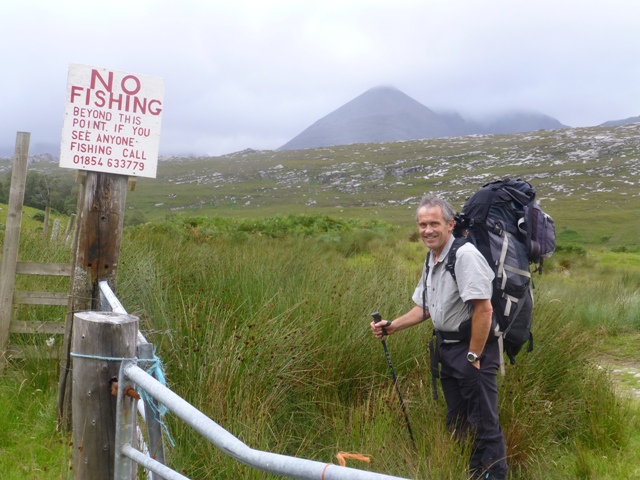 Mr T - my walking buddy - looking fresh at the start but he doesn't realise what he's let himself in for!

Not exactly a saunter with the size of our packs, but it was an amazing taster before the main feast tomorrow. The pit pony [me] - what made me bring all this stuff?

After the miserable day of rain we had a beautiful evening [if you could ignore the midgets!] and stunning views. 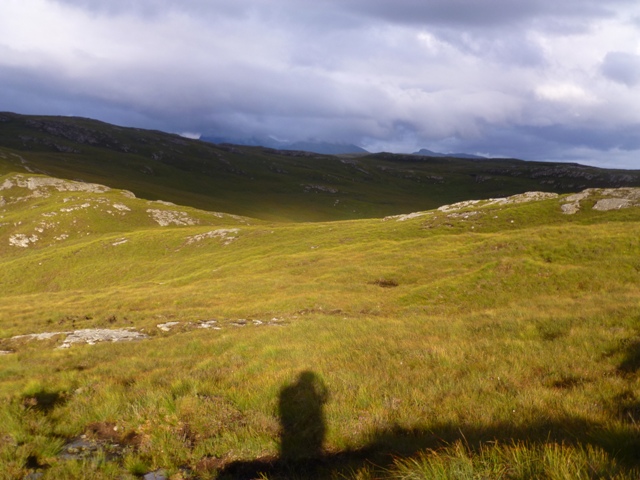 We'd probably have been there hours earlier but I couldn't help myself - snapping away in all directions! 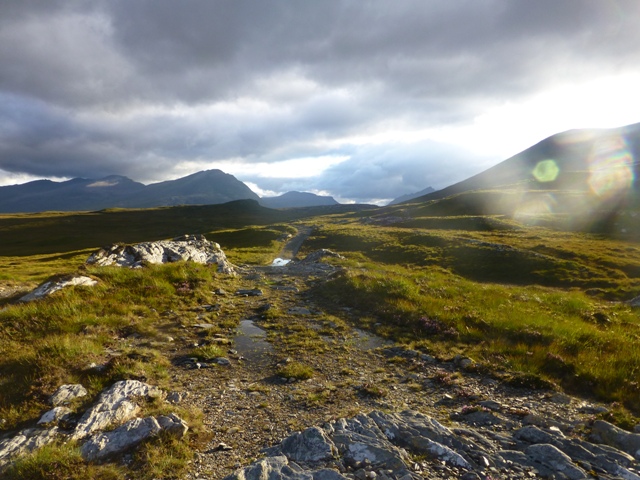 The yellow brick road ahead

We could see tomorrow's expedition stretching out ahead of us and it looked quite daunting, but I thought 'others have done it, so OF COURSE we can!' 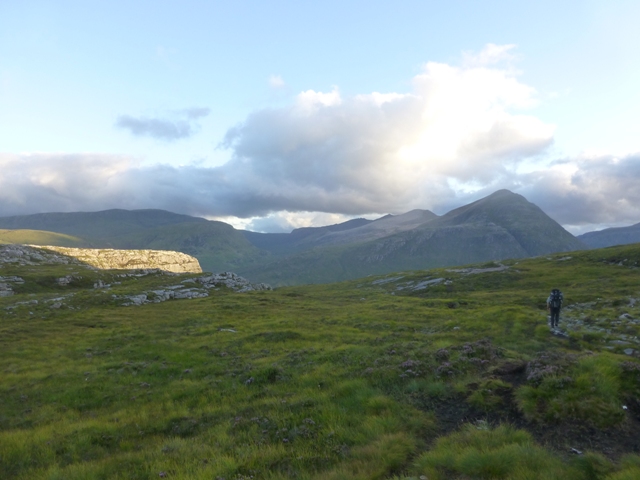 Looking across Strath na Sealga to 1-2-3 of the Fisherfield 6.

The sun was setting as we dropped into the valley, with Loch na Sealga shining in the fading light as the midgets got to work again The bothy was a welcome sight after that long trek, and we got a brew on [+ more Skin so Soft - there were as many midges indoors as out!]
I'll draw a veil over the night - enough to say it was a taste of 'bothy living' I could have done without....courtesy of revellers who partied til the wee small hours, then crashed about til dawn - going in and out. I dozed about 30 minutes and got up at 5 wondering how I was going to climb 6 munros in 14 hours [we were told] with no sleep!
However, a look outside at the clear sky with the promise of a good day changed my mood, and we set off just after 6. 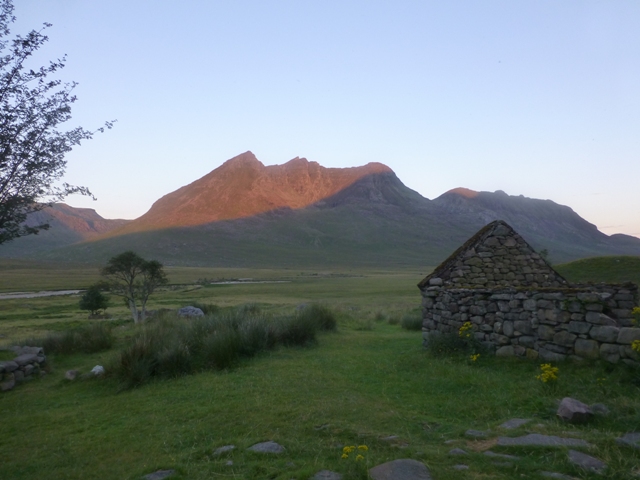 A father and son combination were setting off just after us to do the route in the opposite direction - it would be interesting to see where we met them!
What a difference the dry Summer in the NW made at the start and end of the day....the river was low and the bog pretty dry, so we headed more or less straight for the foot of A' Chlaidheimh [Nr 1] and up the rocky spur. Great views back to An Teallach which I was sizing up for another Big Day. 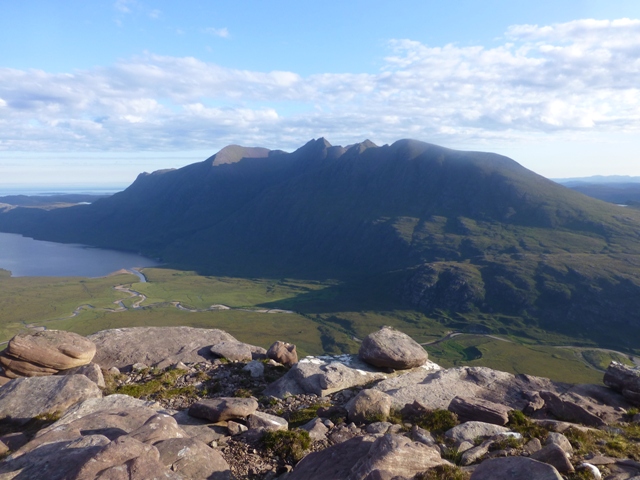 Every minute higher the light gets brighter - can you ever have too many shots of An Teallach?

Feeling pretty good to reach the 1st summit along a lovely ridge walk.

We got there about 8.30. How can anyone say that this lovely whale-back mountain doesn't deserve to be a munro! Bringing up the rear! The ridge walk on Beinn a' Chlaidheimh

We caught the first of many heavy showers coming in from the West. Many passed us by, but we got a fair drenching along the way! Threatening clouds and rainbow over 5 & 6!

Now the long drop down to skirt Loch a' Bhriseadh before pulling up the rock terraces to Nr 2 Sgurr Ban. Curious, the sharp line between the grassy slope and the edge of the boulder field. A short walk across the surface of the moon and we were at the summit! Fabulous distant view of the Summer Isles before we got enveloped in cloud and rain for the next hour or so. 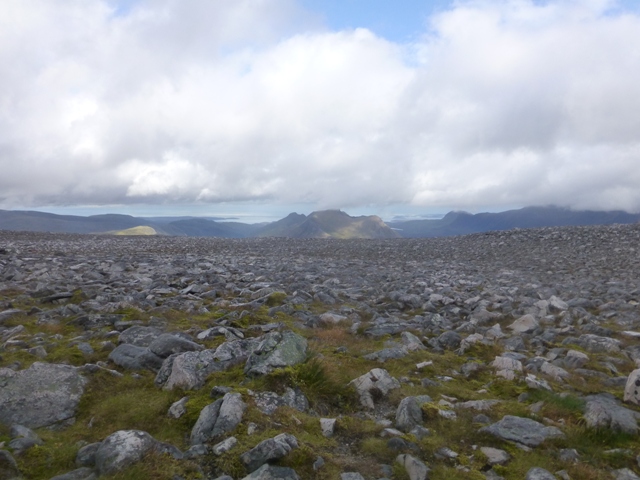 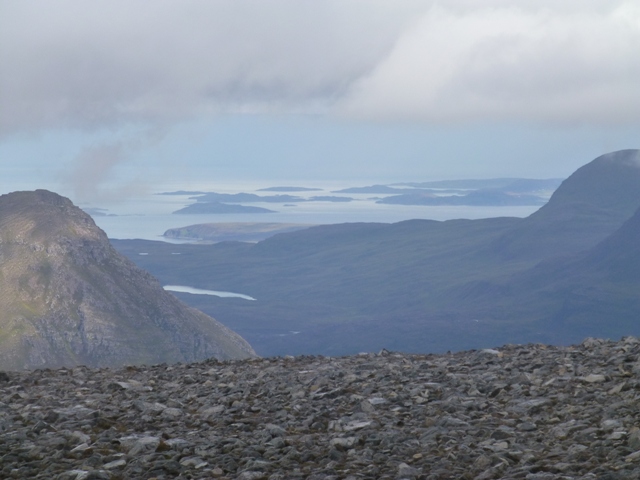 How's that for a view?

Consequently I can't say much about Mullach Coire Mhic Fhearchair [Nr 3] except that it was pretty steep up and pretty steep down again! And I had the impression of some impressive craggy bits! The kind of thing I would have loved to see properly. I was beginning to wonder if I wanted to do the whole thing if this weather kept up. [I get these negative thoughts quite frequently these days!

Fortunately the clouds cleared again as we came round towards Meall Garbh, and we got a view of Nrs 4, 5 and 6. I was particularly happy to see Beinn Tarsuinn after what I'd seen on other people's walk posts. Skirting Meall Garbh we headed up BT's nice grassy slope and got the classic shot of the tennis court below plus a nice view back down the valley towards Shenevall. 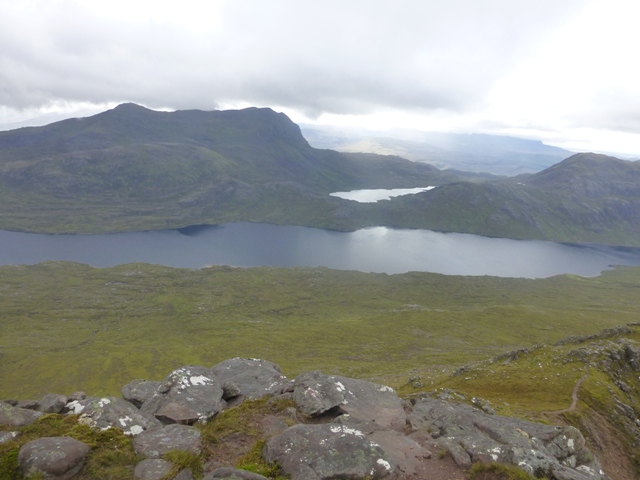 I identified Slioch - noting it for a future trip... this angle doesn't do it justice, compared to the view across Loch Maree. Up onto the tennis court - unfortunately no Pimms and strawberries! And we'd forgotten our rackets. The next bit along the ridge was fun! The cloud hovering in and out added to the atmosphere. Along the knife ridge of Beinn Tarsuinn

It was a shame to have to leave it, but we needed to drop down to the boggy bealach between Nrs 4 & 5 so we skirted the top on the bypass path and saw a faint line dropping just where we needed it to! Clever how these things work out!

Again, luckily the dry weather made this part not unpleasant and we crossed the bealach about bang on 6 hours into the walk. Right where we thought we should be. No talk now that we might give up, as we could see the top [I think] of A' Mhaighdean [Nr 5] in the distance, and it had been in sun most of the day. We were discussing how we should see the other 2 coming in the other direction any time now, and all of a sudden they were there - chugging up the side of BT on about the same contour, a few hundred metres away. Didn't want to waste energy by going over the bog to chat but we waved vigourously!
A nice long pull up on grass and rocky outcrops to the top. What everyone says about the stunning views is true, and we were fortunate enough to have almost perfect conditions to enjoy it. Much clicking of lenses! 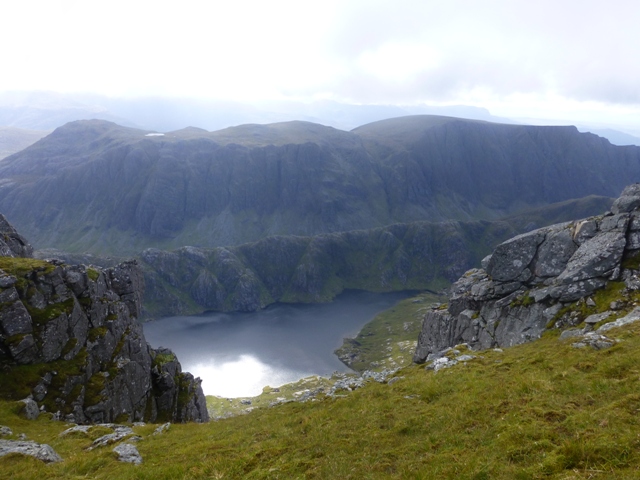 Gorm Loch Mor from A' Mhaighdean 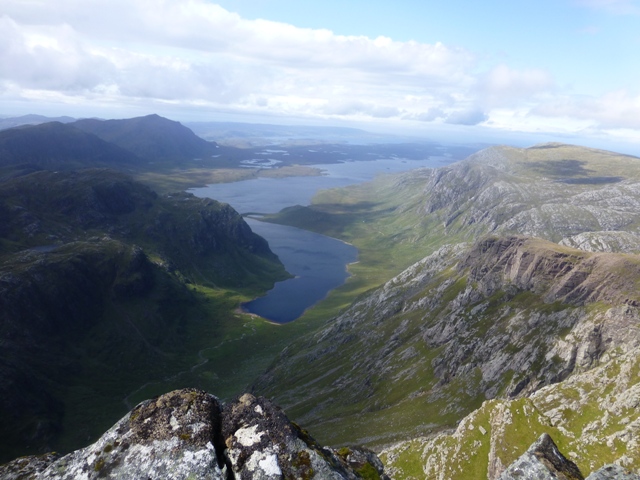 Looking NW from A' Mhaighdean to Dubh Loch, Fionn Loch and Poolewe

A nice steep drop down to the pass at the foot of Ruadh Stac Mor. I was quite surpised to find a young German girl sauntering up the rocky terraces in a pair of suede shoes, cotton jacket and jeans. Hardly dressed for it and I couldn't see at least a map. She assured us she was enjoying herself and had left her pack nearby to go to the top. But, as mothers do I worried for her!

We made a direct attack on the side of the last munro. Feeling very keen to get there fast, and we had seen from above that others had done it before us. So a steep scramble up through the crags and onto the final boulder field to the top!

Another grand view. Even a square built cairn! 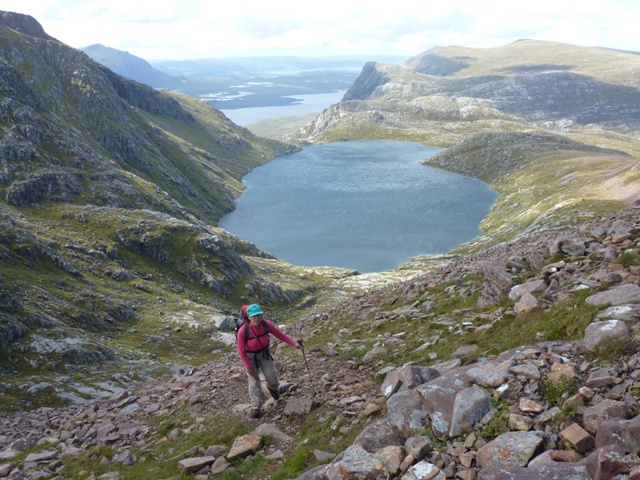 Me heading up the last ascent with Fuar Loch Mor behind I felt really chuffed, and we should have had a formal celebration for completing the 6th munro, but we pressed on - now keen to get back and flake out! The way back down between the 2 lochans

The journey back was inevitably long and wearying but it had to be done! The path between the 2 lochans was nice - with a lovely spot to camp near the burn rushing down from the top lochan into the bottom? A young lad we came across later was heading there with his tent. We met the well made stalkers path coming up from Glen na Muice Beigg, and followed it down to the cottages at Larachantivore. Crossing the river close by we made our final trudge across the peatlands to the 2nd crossing. I was pretty relieved the waters were all so low - must be an awful prospect to have to negotiate the rivers and bog when they're much higher at the end of a long day.
Put a spurt on for the last few steps and we made it back just before 6! So under 12 hours, and pretty much what'd we'd calculated. Pity the late night revellers weren't there to thumb our noses at! Needless to say, dinner was very welcome and swiftly followed by 10 hours unbroken sleep! 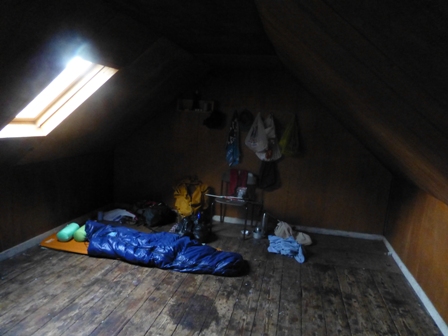 The day's final resting place! Never was a piece of hard floor and a sleeping bag such a welcome sight!

The kendal mintcake injury? That happened the next day [after a fantastic day on Beinn Dearg Mor], as we were getting ready to move out from Shenevall. Feeling in need of some energy I reached for the trusty KMC. Unfortunately it was not the real thing [won't say what brand], and I never even got to taste it, cos it broke my front tooth on the first bite! Ho hum! I added it to my list of cuts, bites and bruises, shouldered my pack and headed off. So what if I looked like a vagrant - I'd just had 2 memorable days in Scotland's great wilderness, and I was feeling Fine!

Looking forward to many more.

Lovely report. But what on earth did you have in those two rucksacks!

I agree, a superb report of a brilliant walk.

I'm a bit of a slow learner, me.... Just realised I hadn't got my list of mountains at the top of this. And I've lost my route map somewhere! Never mind - I'll get the hang eventually.

Thanks for nice comments by the way. I know this - writing mountain reports - is going to become my new best hobby - apart from actually walking them that is!

Yep,excellent report,been trying to get to these for a while now but been foiled for various reasons but will read over this(and the many other great Fisherfield reports) again when i eventually get up there.Well done