) then John, Damson & I were going to tackle Blencathra and surrounding fells on the Sunday.

Come 08:00 on the Sunday morning however, I was sitting outside John's house watching for any twitch in the curtains to suggest any sign of movement. When none was forthcoming, Damson & I headed off through the districts central roads towards Keswick and round to Blencathra.

We set off in rain upto Newby Bridge and then glorious sunshine for that time in the morning heading through Grasmere. Susie the Pensioner was probably somewhere very close as Grasmere itself looked like a perfect mirror with a great reflection of Silver How spread out across the waters. Unfortunately there was no spot to park and get the camera out !!

On approaching Keswick the weather got worse and Skiddaw and Blencathra were almost completely blanketed by cloud causing us to change our plans for the day.

So we changed course for Patterdale travelling through Troutbridge and coming across a huge cycle race. There were bikes almost constantly passing us for the entire stretch between Keswick and Aira Force.

On reaching Patterdale we parked opposite the church on the grass verge where we had parked up a couple of weeks ago for the AngleTarn Pikes and The Nab walk, and again went through Side Farm and up to Boredale Hause following the same route as before. With a gentle cooling breeze, this was much easier than our previous attempt and good, quick progress was made on the initial climb. 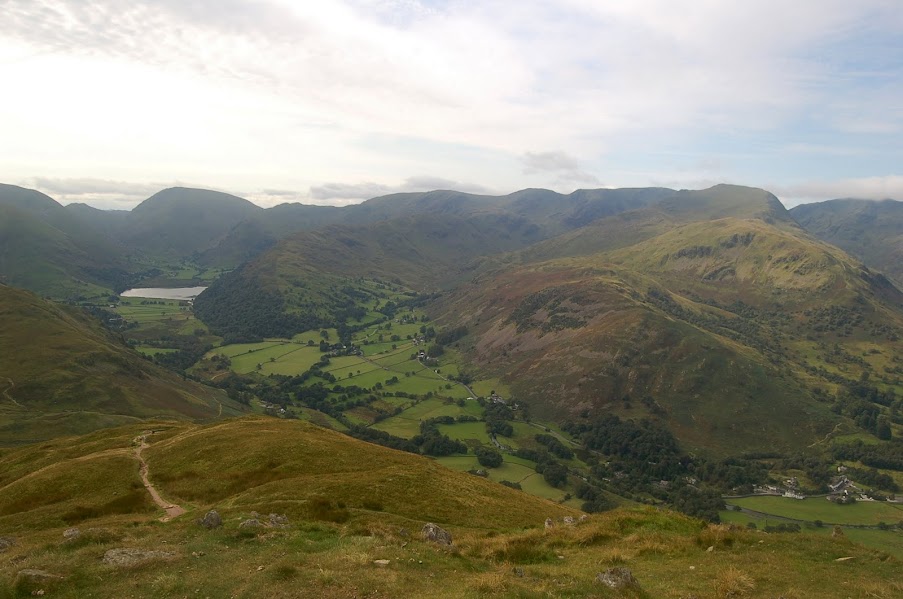 From the Hause we took the left path up the clear zig-zag path towards Place Fell summit.
The summit was rather populated so we hung around for a small while and Damson had her usual picture taken atop any trig point we find. 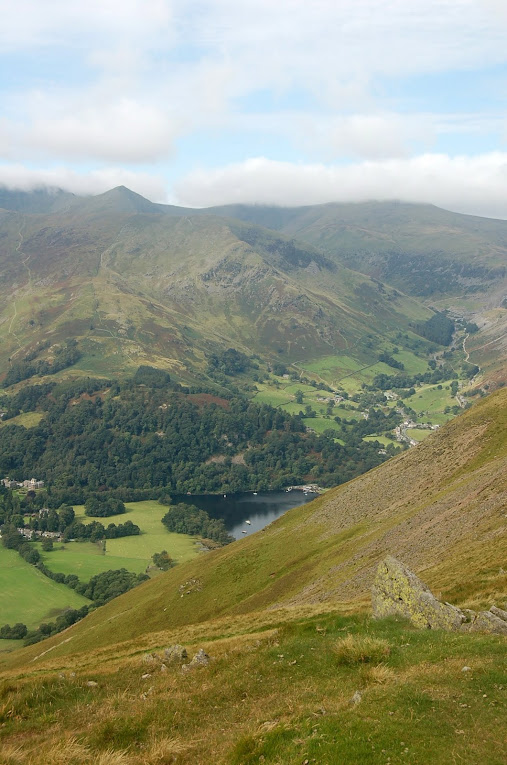 Panorama from ascent up Place Fell

360 Panorama from Place Fell summit - No, I don't know who person at trig point is ??

View to Fairfield and St Sundays Crag from Place Fell 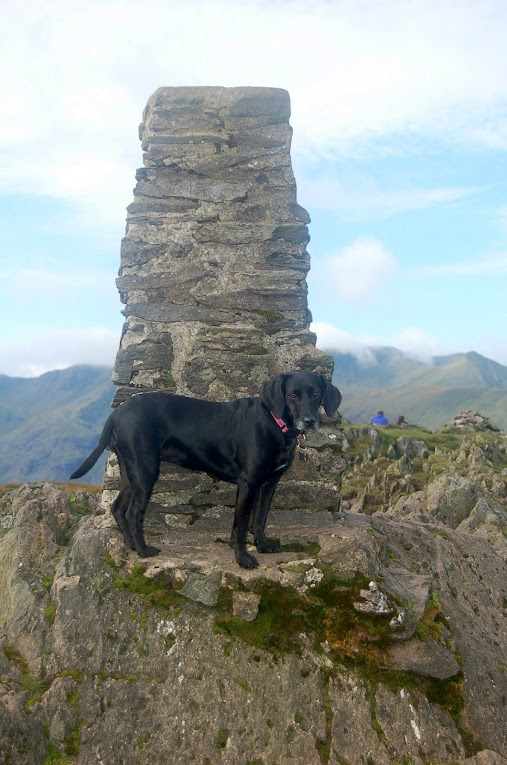 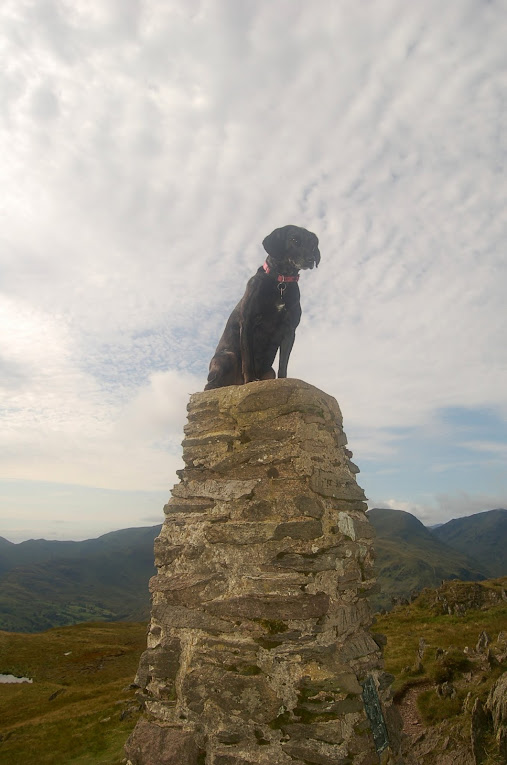 Damson on top of trig point on Place Fell 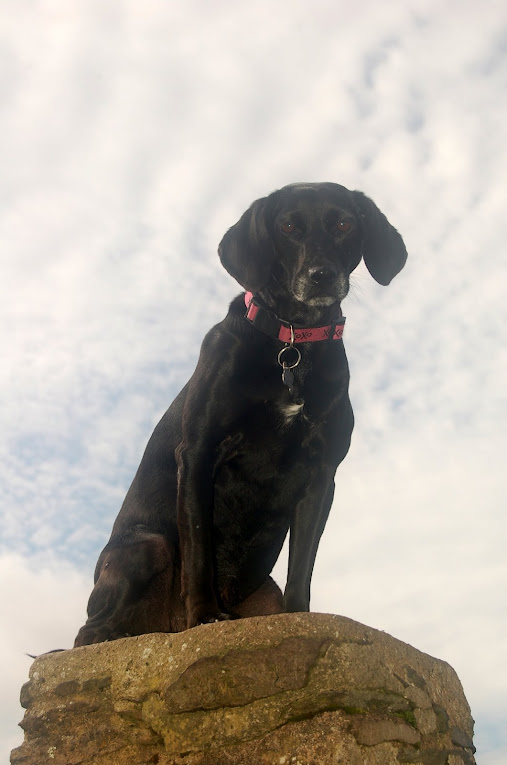 We descended back to Boredale Hause back down the zig-zag and then hooked left on the far side of the boggy land that stretches between the path down into Boredale and our path heading up and round onto the ridge of Beda Fell.
The initial section felt very similar to its sister fell The Nab (bagged a few weeks previous) with wide stretches of bog to negotiate but these soon disappeared as we got to the grassy & rocky sections that head up towards Beda Fells summit point. 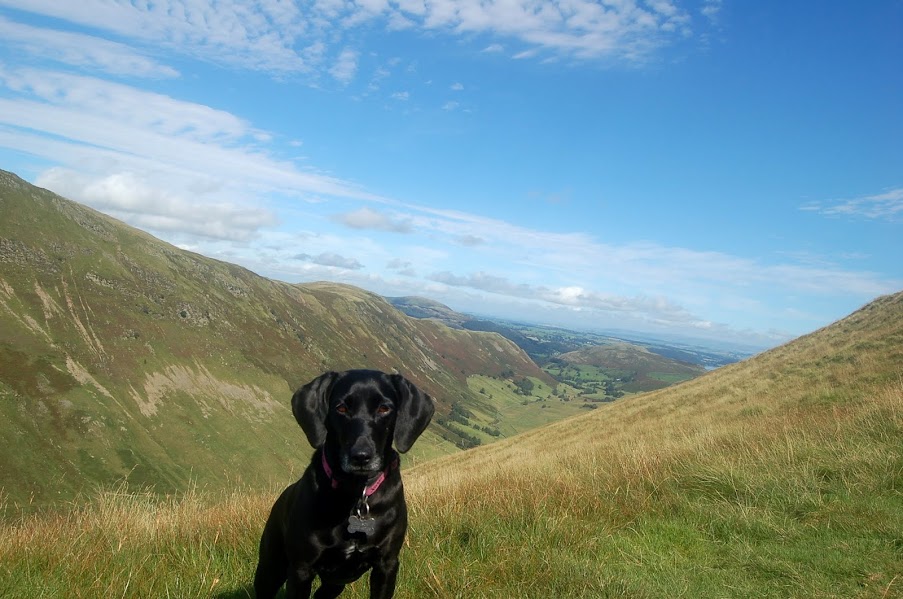 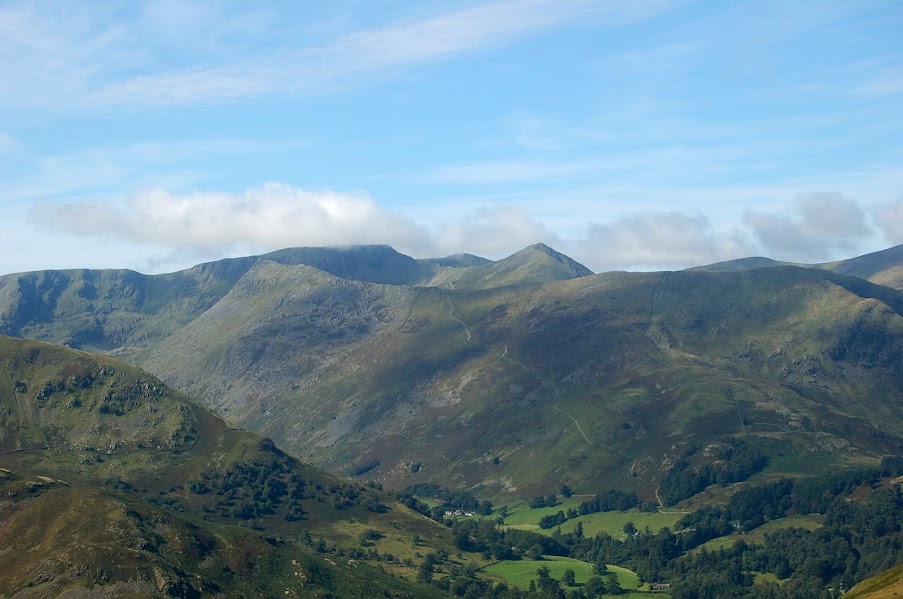 View across to Helvellyn range from above Boredale Hause 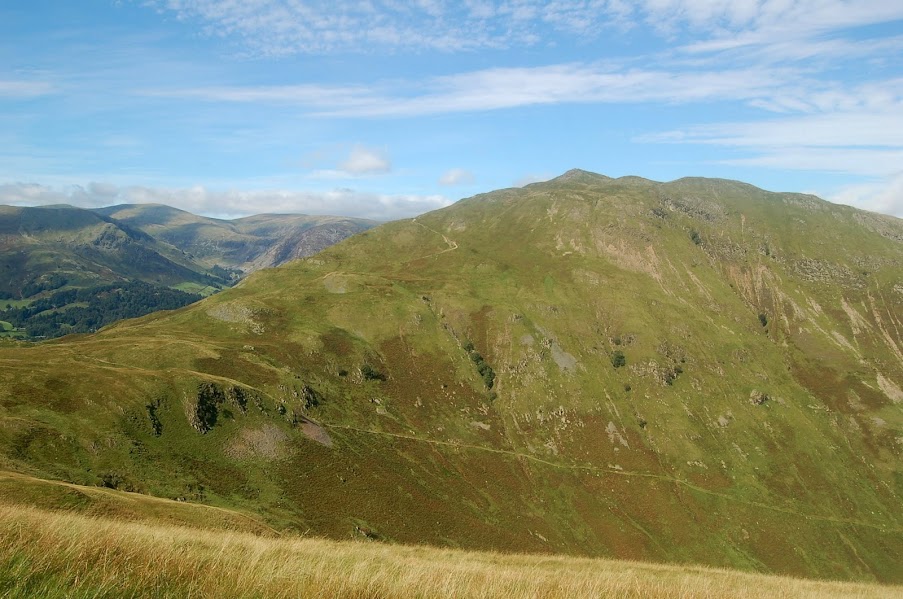 It was only at this point in the day that we could see the majority of Blencathra off in the north. The cloud had finally lifted enough to show its summit yet Skiddaw's summit was still hidden. 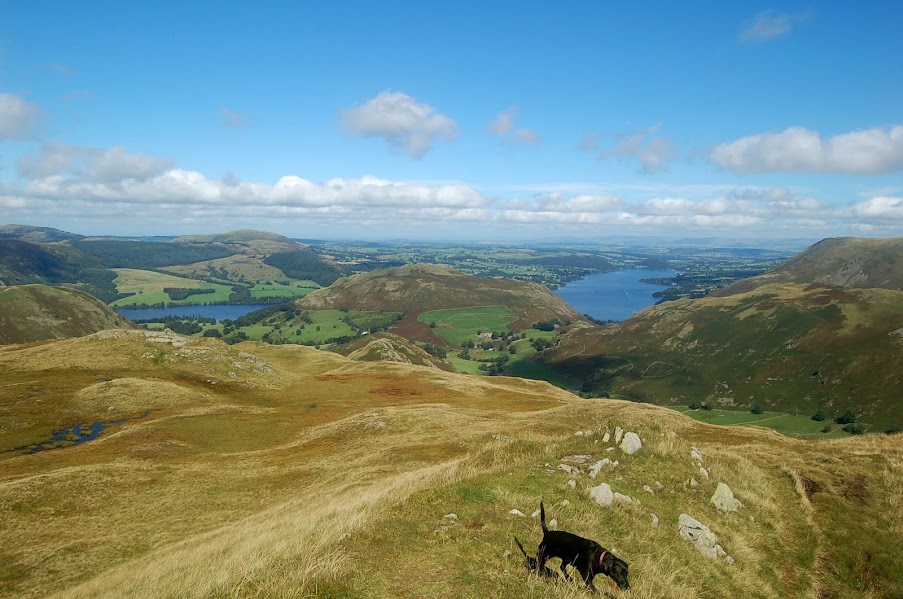 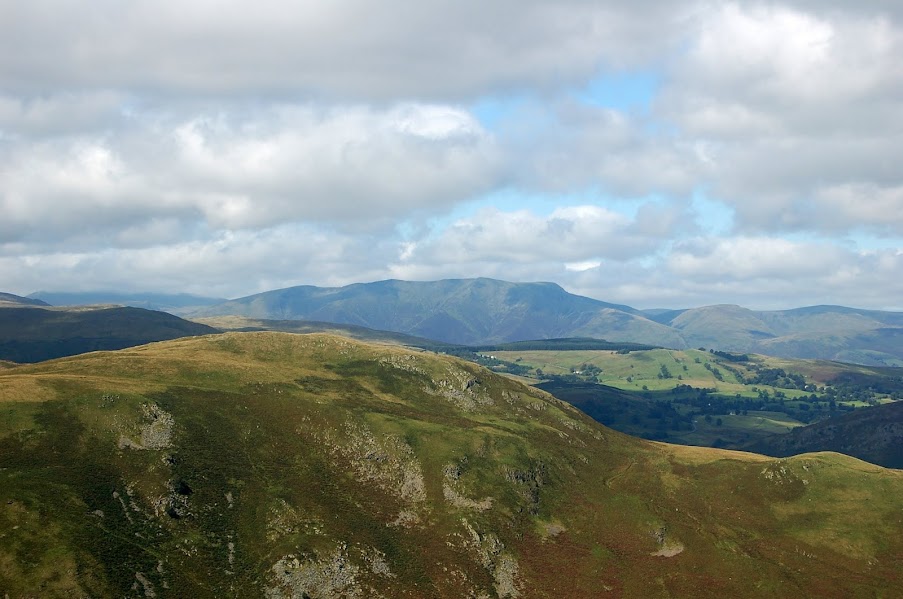 Mid afternoon before Blencathra peeps out from under the clouds 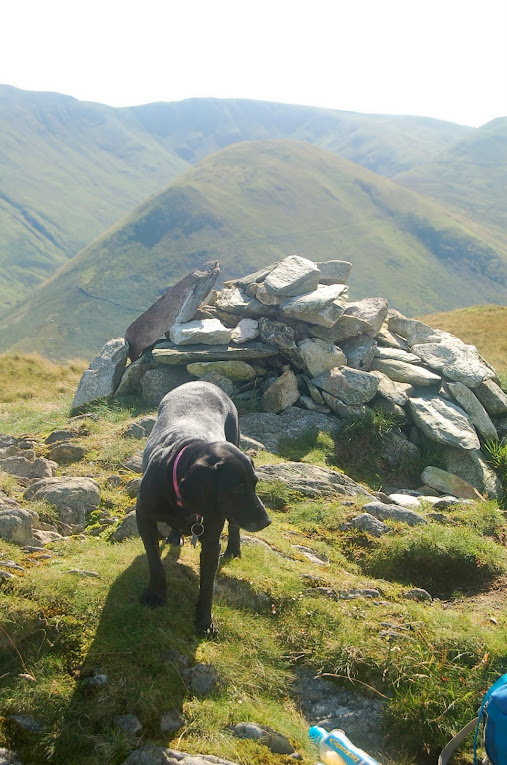 Damson on Beda Fell summit with The Nab in background

Over the top we went, and down through the bracken to a small bench that marked the centre point of a number of converging paths.
The sun was blazing now so we had a break and a bite to eat before taking the path left and down to the Boredale road. We headed back towards the lake by taking the road all the way down into the beautiful Sandwick village and then the shore path heading round the foot of Place Fell back towards Patterdale. 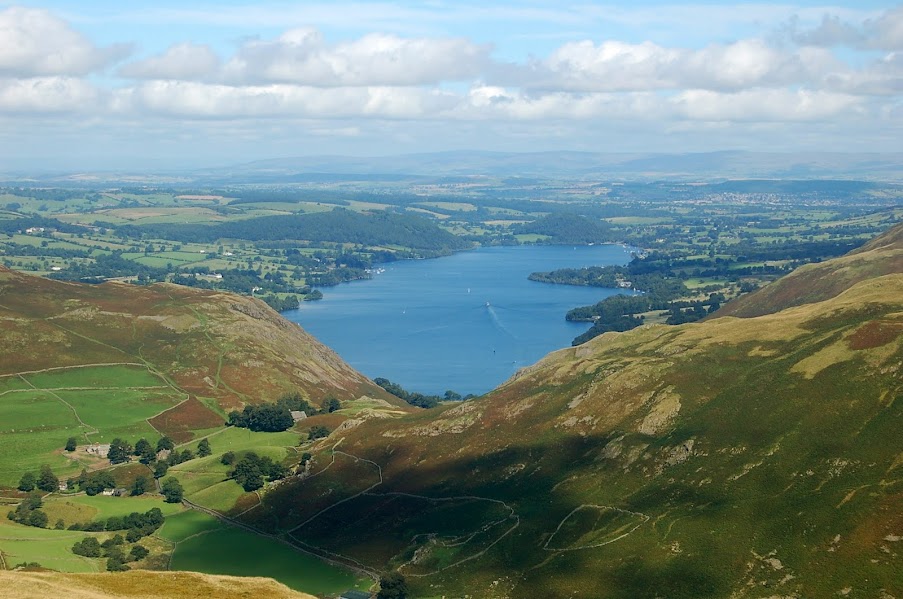 Northern stretch of Ullswater from Beda Fell descent towards Howtown

I'd done this stretch a few years previous with Ellie and a group of our good friends whilst camping in Glenridding (took the launch for a day out then walked back to the campsite), and memories of some great times came flooding back especially when reaching the little plateau over looking the little bay under Silver Crag where we have a photo of myself and Ellie sat on the large rock overlooking the lake.

We broke away from the shore path and took the small climb to the left of Silver Crag and along the upper terrace path back towards Side Farm.
Just before reaching the small path down to the farm we came across a lovely small waterfall dropping into a cave like opening. Damson got a much needed drink before heading back to the car. 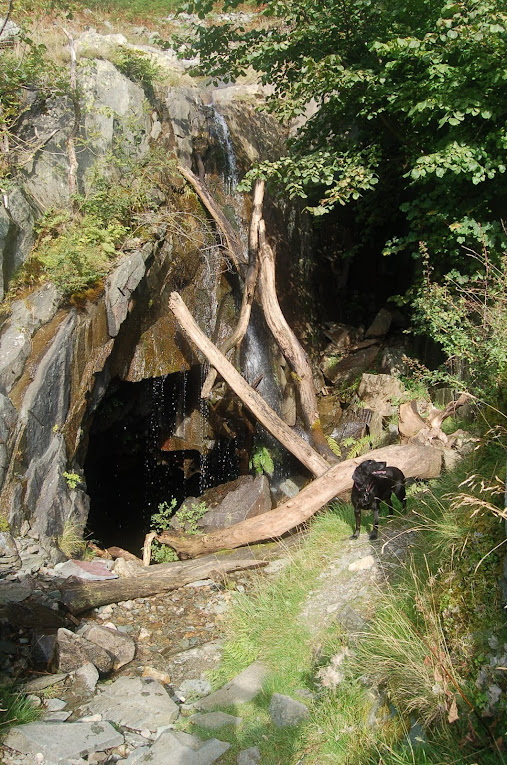 Damson at Waterfall above Side Farm

A thoroughly enjoyable few hours wandering in unexpectedly great weather. I topped up the sun-tan and probably got more exercise than I'd bargained for as none of todays sections were particularly flat (even the shore path has some steep little climbs.

That looks a fair old wander Phooooey, great photos of some rare good weather by the looks of it. Cracking shots of Damson on the trig point

I'll come back for the write up

Phooooey wrote:Susie the Pensioner was probably somewhere very close as Grasmere itself looked like a perfect mirror with a great reflection of Silver How spread out across the waters. Unfortunately there was no spot to park and get the camera out !!

Phooooey wrote:So we changed course for Patterdale travelling through Troutbridge and coming across a huge cycle race. There were bikes almost constantly passing us for the entire stretch between Keswick and Aira Force.

This was the Helvellyn Triathalon; a friend of ours was competing

Glad the words have been added, Craig, to those fantastic photos

Love the ones of Damson

A lovely walk and thoroughly enjoyed your report

Many years ago we set off on the same walk but were a bit late so headed straight down Boredale after Place Fell. We ended up walking in the dark for the last 2 miles and it was a bit scary; for me as well as the girls

So that's what the view from Place Fell actually looks like

The hills are beautiful colours. I keep changing my mind about whether I'm going to get back to the Lakes in the autumn or not...

Thank you all for your messages. Damson & I appreciate your contributions.
I've updated the blog (finally) to cover the entire walk and explain a few of the pictures.
I use an online piece of software to generate most of my panorama pics so if you would like to see the 360 pic (or indeed any of the others from this walk and others) please follow the link below and either follow my ID phooooey or use the pins in the added map to access over 50 panorama pictures from my walks across lakeland.
The software looks best if you open up to full page view. Drag the photo left and right to experience the 3D panorama effect.

Susie, I can well imagine that Boredale is not the place to go night hiking. There's only a small number of buildings on that entire length of Ullswater so it can get pretty dark.

I remember having to park at the church in Howtown in a mates Nissan Sunny with a leaky sunroof on a terrible stormy night (we couldn't find the campsite we were after and were supposed to be meeting a friend there the next morning - he didn't turn up in the end and we were cold and freezing and went for a pint then home instead of doing the walk we'd gone to do).
It got very dark very quickly and the lightning kept lighting up the gravestones we were facing. That was scary

. Good jobwe had our sleeping bags and plenty of booze to get us through the night. That was more years ago than I care to think about now.

That's one of the most majestic Lake District photos I've ever seen - Damson on top of Place Fell!