This was the first one, climbed in late May of this year. Why Vorlch? It's a good question, and truth be told I knew very little of it bar the fact that ot was 1 of the 283 Scottish peaks to rise above 3000 feet.

Ben Vorlich lies just south of Loch Earn in the Southern Highlands. Lurking further south and ten metres shorter in elevation is Stuc a' Chroin, a fine Munro in itself. I was very aware that it was possible to take in 2 Munro's today, but we were only focussed on 1.

The climbing party rose to 2 - my father Craig Allen, who shares an equal interest in these hills, and ofcourse myself. We arrived at Ardvorlich at around 1030, after weaving our way through the road on the southern banks of Loch Earn. This road is very narrow, however can be easily accessed off the A84 a short while north of the town Callander.

The climb from Ardvorlich is the most popular route it seems, and I had clearly underestimated the popularity of the hill beforehand as the parking spaces were limited on arrival. In any case, we set off through Ardvorlich and by Ardvorlich House at 1047. We soon approached the track, introduced to us as the start of the climb, and we wasted no time following it through the valley leaving the Loch behind us. The track continues steadily inclining upwards until it splits. Both routes can take you to the summit of Ben Vorlich however we want to get on to the North Ridge, so stayed right following Coirre Buidhe. Soon enough the track turned into a path as we got on to the south side of the hill. Loch Earn looking South from the South side.

Just as we were commenting on how well we had timed it for the weather, we were no sooner hit with the ever changing Scottish weather. In no time as we climbed upwards on the south side and on to the west, were we quickly surrounded in clouds. Looking back down the South side. The once visible Ben Vorlich is now entirely surrounded in cloud.

We knew from the start that the Scottish weather was extremely unpredicatble, however even we were shocked at the rate at which the clouds gathered across the slopes. It was no excuse for return though, and we continued up the west side and approached the first rocky section just before the north ridge. In the mist, it can be unsettling for those who have limited knowledge and experience climbing the Munro's. However, I was relatively comfortbable with my bearings, and on Ben Vorlich you can always be sure of the path. It's important to stay true to it in these conditions. Once on the north ridge we had came to the decision that we would be unlikely to see anything from the top as the cloud cover had worsened. Looking over the East side from the North Ridge.

Due to this, we were hit by a number of blind summits where we had convinced ourselves we were only moments from the top, and we could feel our legs tiring. Soon enough though the OS trig point came in to view in the mist and I realised we had approached the last section. In just under 2 hours we had reached the summit after crossing a further 100 metres along the ridge from the trig point to the cairn. Looking across from the trig point to the cairn. As promised the views were second to none.

In the weather, we knew even if we did plan on crossing over to Stuc a' Chroin, there wouldn't have been much point under the conditions. We descended the same way we came, only to find out we should have used the OS trig points to lead us back down to the main path, as this would stop effects of erosion on the hill's north ridge. We wasted no time in getting off the north ridge and soon enough we seen land again. Looking down into the valley from the North Ridge.

On reaching the path we continued to descend and we began to realise that the clouds were slowly dispersing. Had we left it later in the day, we may have got a view form the top. At this point our legs were proving our biggest enemy as we slowly wandered back down and into the valley leading back to Loch Earn. I took one final turn to capture Ben Vorlich from the north. The cloud was still covering the peak, and would probably do so all day. 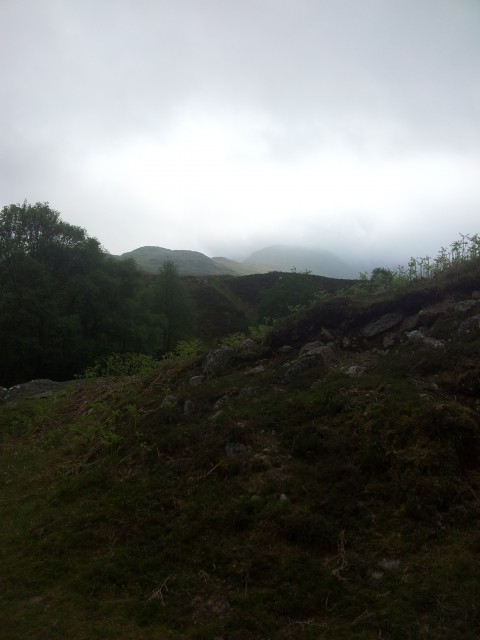 Looking to the summit from the North.

In exactly 4 hours we had trundled through Ardvorlich and back to the car again. Considering the conditions and our lack of experience on these mountains we were relatively pleased with our time considering we spent about 15 minutes taking in the views at the top.

In any case, we were triumphant in the fact that this was the first Munro for us. And we quickly decided it would be the first of many. And at the very least, next time round, the Scottish weather may pay us a favour. Or so we thought...

I would get used to walking in cloud like that

Fudgie wrote:I would get used to walking in cloud like that

I climbed Ben Lomond in July and Ben More yesterday, both in shocking conditions with zero visibility - Ben More in particular. I couldn't agree more, I definitely know how to pick them and it's not hard in Scotland! Saying that, a good excuse to do them again.

Fudgie wrote:I would get used to walking in cloud like that

I climbed Ben Lomond in July and Ben More yesterday, both in shocking conditions with zero visibility - Ben More in particular. I couldn't agree more, I definitely know how to pick them and it's not hard in Scotland! Saying that, a good excuse to do them again.

Even the one's I got a clear view from will be revisited as I'll take a different route. I'll need to get round them all first

Fudgie wrote:Even the one's I got a clear view from will be revisited as I'll take a different route. I'll need to get round them all first

Definitely, I'm looking forward to a climb in nicer weather, I could be running out of time this year though. Then again, it's just your luck. I've considered reversing the route I took up Ben Lomond, and ascending via the Ptarmigan Ridge instead before the end of the month. It was great to descend from but I imagine even better on the way up.

Users browsing this forum: Alan B, SecondRow and 68 guests