Wow. I did it!!!!
My dream to climb Suilven has come true!!
Ever since first seeing this iconic mountain as I drove down the West Coast many years ago, I have wanted to climb it.
Living in Orkney is not easy if you love climbing mountains and I had never got the chance until this August, when I was due to play some gigs with my other half around Inverness. I booked us a B&B in Lochinver for two nights before we were due in Inverness, and crossed fingers for good weather.
The morning we set off on the ferry from Stromness was thick with fog and rain, and all round the north coast we couldn't see a thing.
Arkle was the first peak we saw through the fog, and after that it cleared and the rest of the day was dry and grey.
As we neared Lochinver at teatime that night, Suilven was clear of cloud and looked very enticing.
We ate at Lochinver Larder, where the pies had almost doubled in price since the last time we were there, and I went to bed that night in feeling a mixture of apprehension and excitement.
I dreamed of climbing the mountain, and awoke to a grey midgey day with the odd spit of rain on the window.
After an early breakfast we went to the nearby Spar on the lookout for some food to supplement the few things I had brought from home.
Graham re-named it Sparse, after failing to find anything except alcohol and junk food. No bananas or sandwiches or anything nice. I chose a tin of mixed beans and sweetcorn and packed it away with my pie from the Larder and plenty of water and chocolate.
At around half nine Graham drove me to Glencanisp Lodge and left me to it. He spent the day cycling about and reading. (He has bad knees; and can't walk far).
I was initially disheartened. It was looking very murky, with low cloud blanketing all the mountains, and the midgies were out in force.
I jumped on my mountain bike, thinking that I'd spent £170 on this weekend in Lochinver, just to climb this mountain, so I was bloody well going to try, even if I couldn't see a feckin' thing!! I wished I could see the mountain, it seemed to be hiding from me. Gradually, however, the mist began to lift!! I bumped along the track and as I got closer the views became rather stunning..... The mountain bike saved me hours, even though it was pretty rough and I had some entertaining crashes!! It is a very long road and goes up and down like a roller coaster.
The midgies had abated and I was feeling optimistic. I left the bike just before where the path splits in two, turned right and headed toward the bottom of the mountain. It was a really steep walk at first, and very boggy, and then I reached the loch and saw the route up the gully... I walked round the loch, and set off very slowly up the steep gully. It's wet and unstable underfoot and I was very glad I had two poles to help me.
Here's the view ahead, when I was nearly at the top. By this time I had been climbing straight up for over half a hour and was dying to get to the ridge! The last bit was incredibly steep, and as I scrambled up and onto the ridge, the wind hit me, along with a fantastic view of Fionn Loch, Stac Pollaidh and out to the isles! I did sometimes wish I had taken my Nikon SLR with a zoom lens, but in the end I took my compact Canon camera and I'm glad that I did, as it fitted in my pocket.
I turned right and began the walk up to the summit, which was easy, but not for those who don't like heights! I had heard much about this scary bit where there is a narrow path with a drop either side, but I didn't think it was a problem. Here is is, as I approached it. 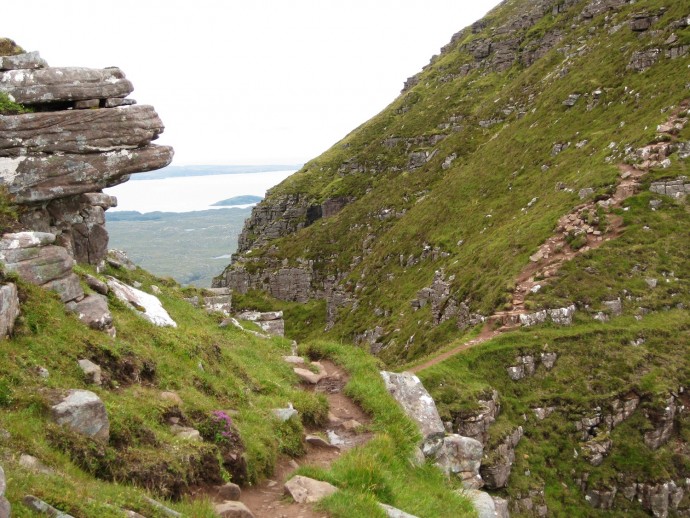 There were some odd deer-shaped rocks up there..... I carried on to the summit and was rewarded with the most amazing panorama, as the mist finally lifted from the peaks and the sun started to peek out. The summit is grassy and flattish! I was quite surprised. I balanced the camera on the rock for a self timed picture. I stopped here for a while to eat my tin of beans and sweetcorn, and to admire the views. I phoned Mum, who has seen a picture of Suilven the day before and was rather worried. I assured her I was fine and hadn't fallen off.
I started back down, thinking that walk back down the gully was sure to be worse than going up! That's the scary bit of path down there too..... For a moment a cloud passed by, and I wondered if the mists were returning and hurried towards the gully, but it soon floated on..... This is one of my favourite photos; Suilven's second summit, with Canisp in the background. mmmmm lovely. Now, everyone goes on about this wall that lies over the top of the mountain. It's a mystery, but I would not like the job of carrying the stone up there first! I can't imagine why anyone did it.
Nicely built though! I reached the gully and headed back down. It was very slippery and pretty precarious - several times I slipped, as a rock I was standing one decided to go walkabouts.
Thank you, poles! I saw a ring ouzel, and passed a couple of other hikers on their way up.
It took less time to go down and I was soon back at the loch at the bottom.
Canisp looked very appealing.... another time..... I looked back at the mountain, a view which had been hidden from me on the approach. It looks so different from here, not at all like the vertical mound seen from Lochinver. I trudged across the bog back to the main path. That bog was my least favourite part and by now I was feeling pretty knackered. I had a rest and found my bike.
As I began the bumpy ride back to the lodge I was very glad I'd brought it. I did have to get off and push over the worst parts but I think it made a huge difference.
The sun came out and I was rewarded with some beautiful scenes! I cycled all the way back to Lochinver. It was all downhill really, so not problem. There was no way of telling Graham when to pick me up as the signal in Lochinver is pretty non existent.
This was my final view as I descended into the village after a really great day on this wonderful mountain. I had a hot shower and ate an awful lot of shortbread before having a lovely sleep. Great to see a mountain dream come true! Suilven is one that I dream about climbing one day, perhaps I'll do it eventually.

Some great photos there, looked like you had a great day

Suilven used to be my menace, too... Until I climbed it last year. A mountain to remember and a fantastic day out.

BlackPanther wrote:Suilven used to be my menace, too... Until I climbed it last year. A mountain to remember and a fantastic day out.

Yes, I read your report a few times! Isn't it fab to have done it at last!