This was the antidote to a rare bad day in the hills the previous weekend; a return to some of the finest of the Brecon Beacons.

cwmgwdi.gpx Open full screen  NB: Walkhighlands is not responsible for the accuracy of gpx files in users posts
Pen y Fan, the top of South Wales, is a pretty popular climb, but seemingly rather less so from the north – even the little carpark above Brecon had plenty of room on a sunny Saturday, and there was no-one bar a couple of mountainbikers to be seen on the contouring route along back-lanes and over fields to the foot of Cribyn’s north ridge. From here, with winds gusting across the tops, I made a late call to forsake a planned route straight up the steep nose of the hill (it actually looked a perfectly manageable stepped path from above later, but discretion tends to rule these days…) – the bridleway up Cwm Cynwyn to the col is a very gentle fast-going alternative. 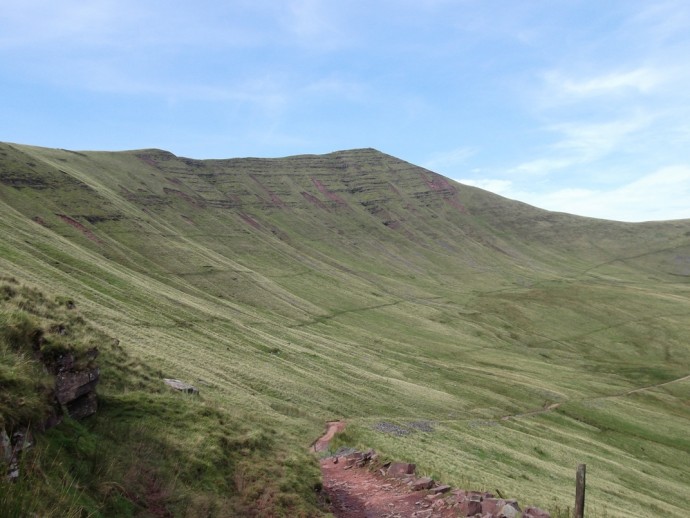 People start to gather (although it’s still hardly Snowdon) from there on the well-made stepped-paths up to and over Cribyn and on to Pen y Fan, with great views from this side of their steep eastern, typically-Beacons, ‘clawed’ faces. These hills are almost geometric in their sharp-angled aspects – Pen y Fan and Corn Du square topped above almost perpendicular rises, Cribyn (with steep drops on all sides bar the gentle south ridge) looking a ‘perfect mountain’ triangle from the north and west. Plenty of people on top of Pen y Fan, but justly so – it’s a great place to be! Just a slight shame to see that in the two years since I was last there someone had thought it worthwhile to smash up the trig-point – they’re only little blocks of stone (although there are times on a bad day on a bad hill when stumbling on one seems like reaching the promised land) but quite what anyone gains from that is a mystery… 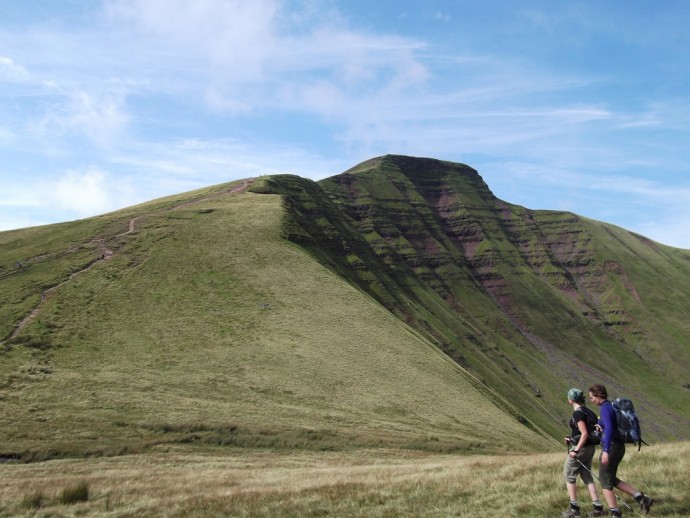 Pen y Fan again from the head of Cwm Sere 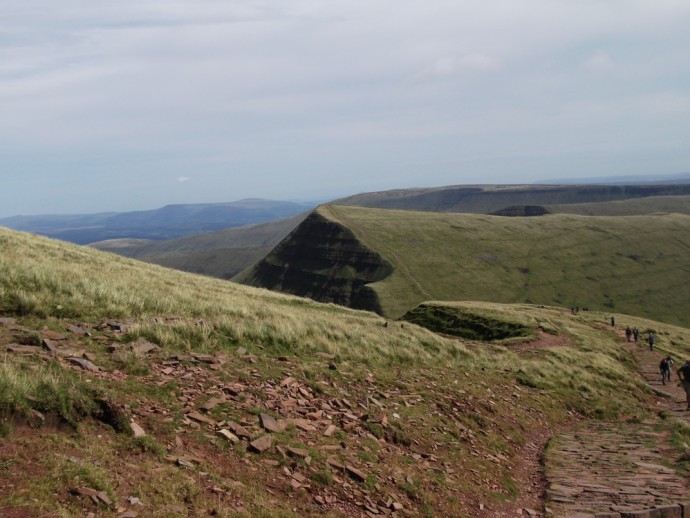 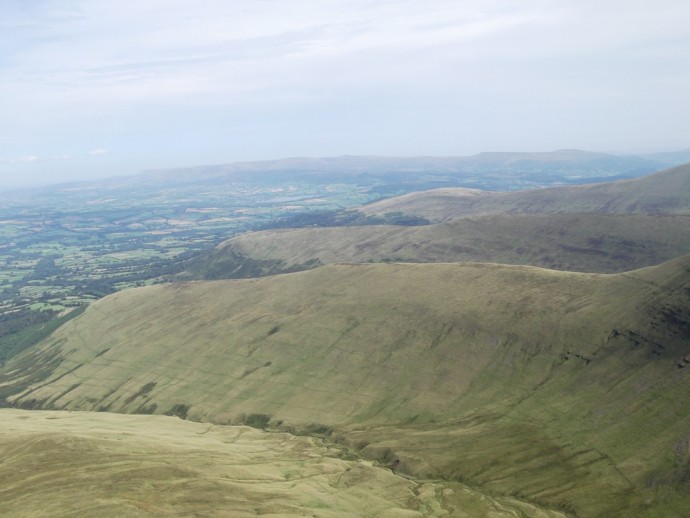 The parallel NE ridges of the Beacons After an initially-steep clamber down, the north ridge of Cefn Cwm Llwch makes for an easy descent. Great views back to the summit – looking especially dramatic from this angle – and a great walk, but perhaps still not quite as perfect a route to these two tops as the southern horseshoe from the Neuadd Reservoirs. 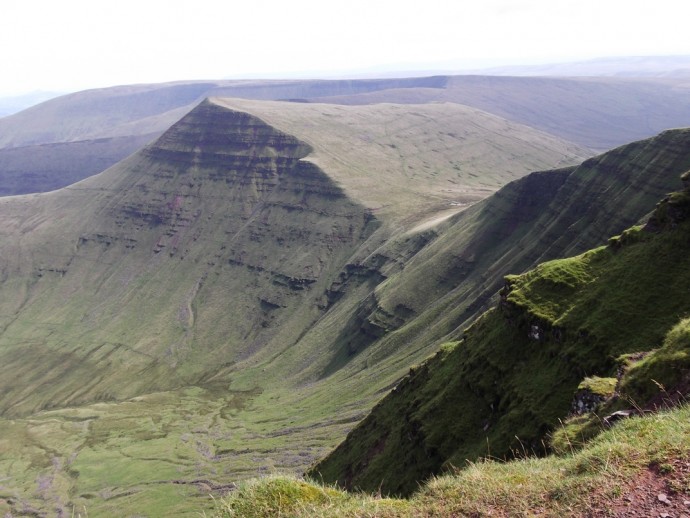 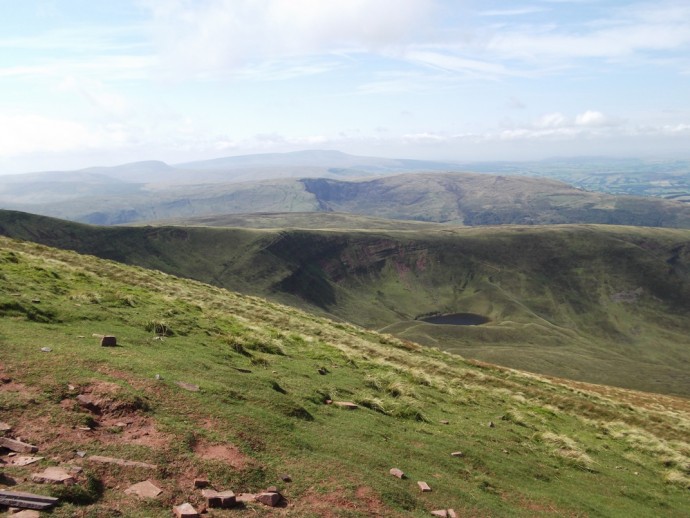 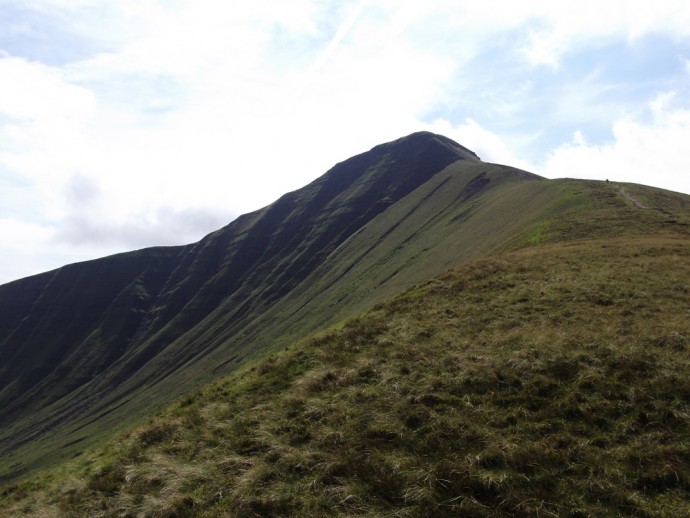 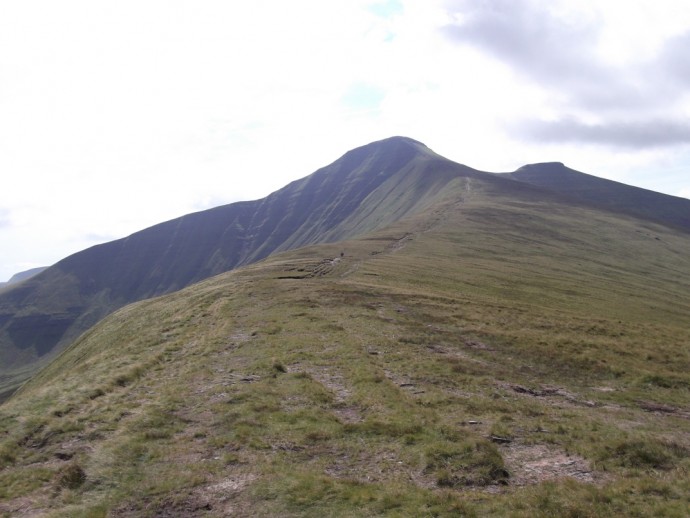 Views back to Pen y Fan from the north ridge 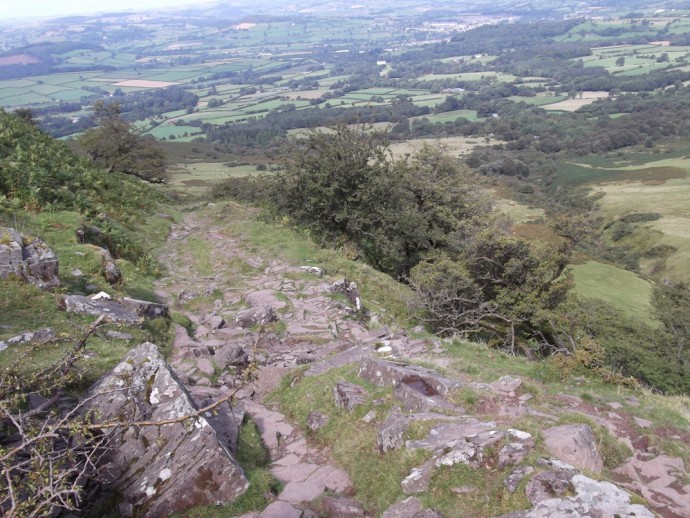 The descent path steepening into Cwmgwdi

Craig Cerrig-Gleisiad, a peak looking quite unlike anything else in the Beacons with its striking green northern crags, is a much-underrated little route – packing plenty of interest, a fair bit of challenge, and two Hewitt summits into an hour’s walk.

ccg.gpx Open full screen  NB: Walkhighlands is not responsible for the accuracy of gpx files in users posts
There’s no denying that the route up is hard though, extremely steep in places and – across little more than rough steps worn into a muddy cliff-face – tough enough in good conditions, definitely to be avoided if wet or icy underfoot. The flipside is that you’re close to the summit from the roadside in barely minutes, and it’s easy all the way from there. A nice switchback takes you close to Fan Frynych (in truth, the short moorland detour to the summit adds little to this walk, but it seems almost churlish not to take it in for the sake of ten minutes – and here’s the pristine trig that Pen y Fan has been robbed of…), and then an off-map but very clear path finds a way back down the cliffs via the lushly-vegetated cwm. 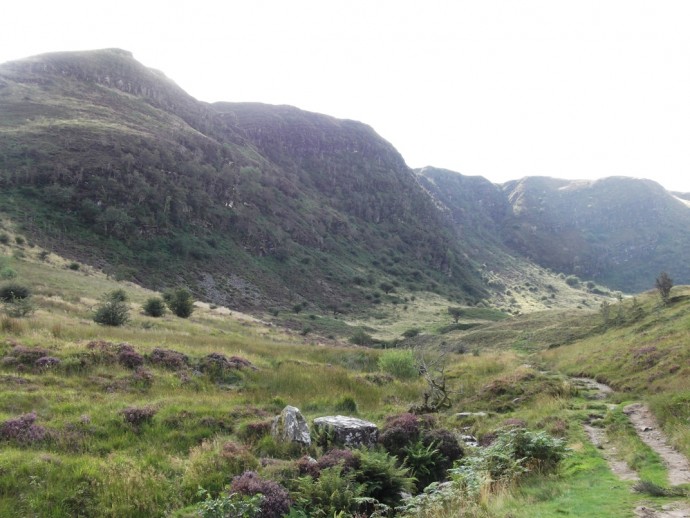 Craig Cerrig-Gleisiad from the start of the ascent 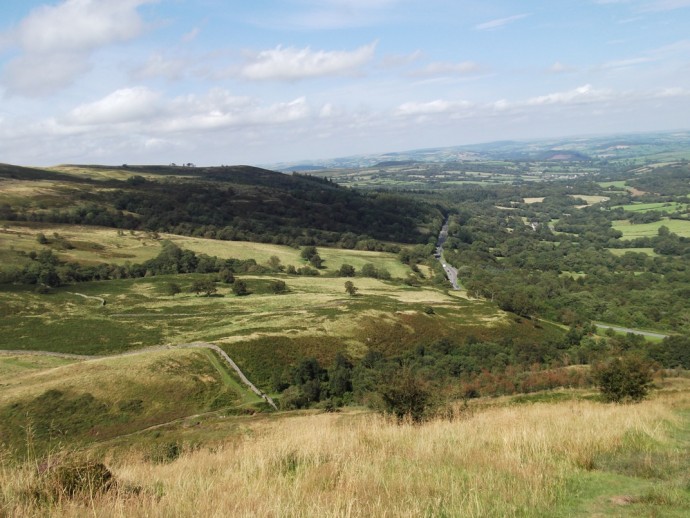 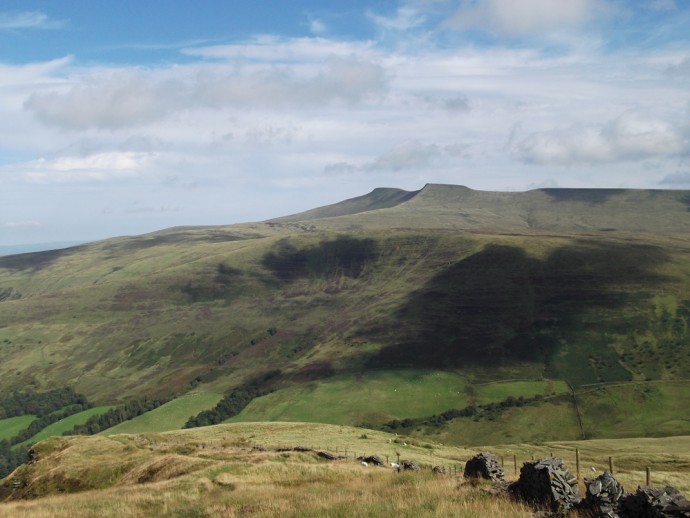 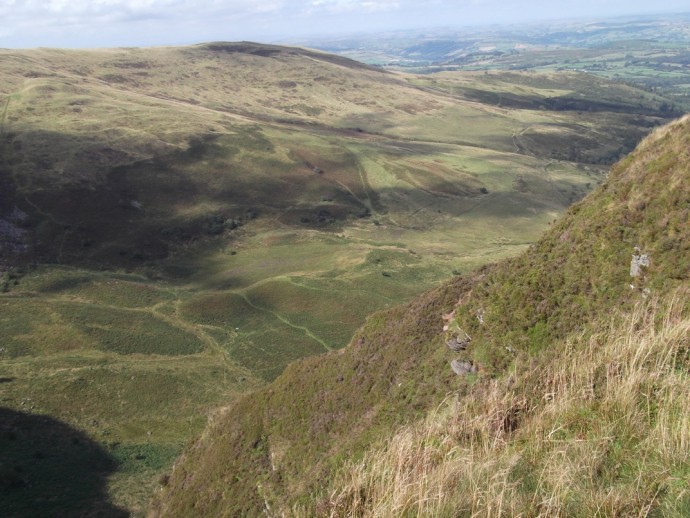 Looking from the clifftop across the cwm to Fan Frynych 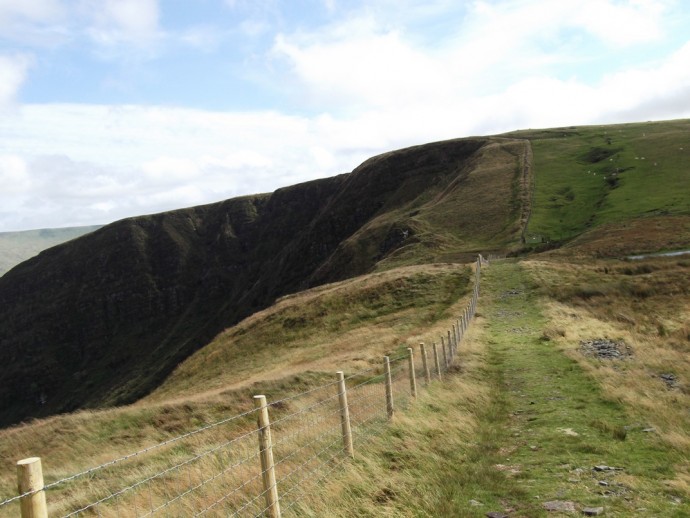 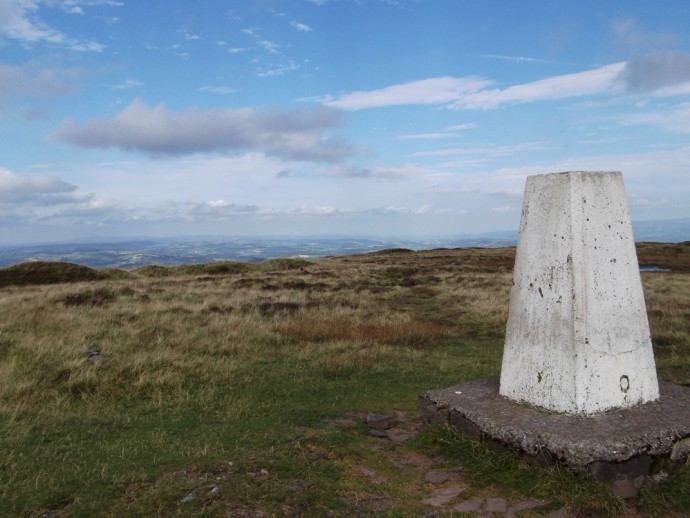 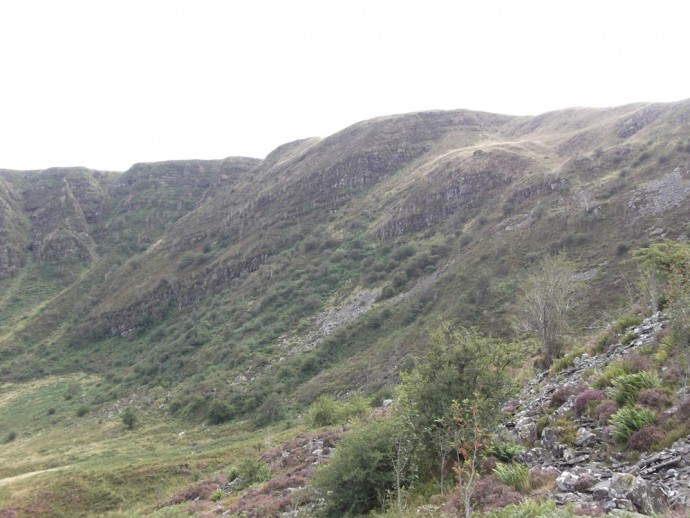 Craig Cerrig-Gleisiad during the descent 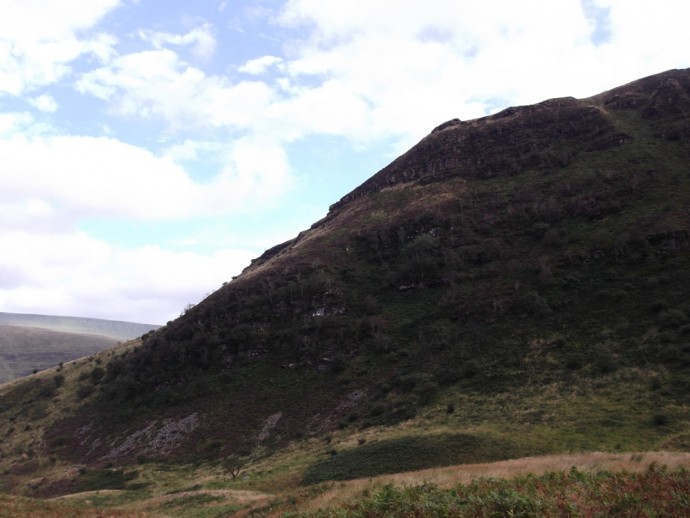 The steep ridge of ascent to CCG

Photos – perhaps due to its always-shaded situation – don’t really do justice to this area, but it’s stunningly beautiful, a great companion to any of the barer ridge walks in the Beacons.

A fine couple of hikes there P, that first one is a real beauty. Shame some asshat decided to wreck the trig...I guess that is one of the issues with more popular hills.......they find the less popular people. Anyway enough of the idiots, this is a great day out, love the pin sharp photos too

Good one Poppiesrara, the first part is definitely one of the best walks in the central Brecons so it is really good to see it here - far better than the tourist track up from the Storey Arms. Looks like you had an excellent day for it. Sad to hear that halfwits are now taking to the hills too.....
The Craig is a lovely viewpoint across to the main group, and as you say there a few other places that come close to this in the area.