All five of Kintail's sisters

All five of Kintail's sisters


In June I'd met two mountain walkers from Alnwick, Northumberland on the Cairnwell 3 circuit.They were Jimmy and his 13 year old son Ben. We'd exchanged phone numbers, and so later I got in touch and suggested doing the Five Sisters together, as our two cars would clearly be useful for this linear walk.


5sis_trip.gpx Open full screen  NB: Walkhighlands is not responsible for the accuracy of gpx files in users posts

I drove up from Wakefield to Kintail on Saturday 25 August, and met Jimmy and Ben at the Cluanie Inn. We arranged to meet the next morning at the parking space on the A87 near Allt a' Chruinn. I left my car there, remembered to hold on to my keys (

) and Jimmy drove us all to the layby for the start of the walk. We began the steep ascent, looking back up Glen Shiel to Faochag. Ben and Jimmy went on ahead: In time we arrived at the Bealach an Lapain. On Sgurr na Spainteach, Ben sat down for a well earned rest. Jimmy and Ben had already been in the Highlands a few days and climbed a few Munros including the
Ring of Steall, not bad going for a 13 year old. Soon we were heading to Sgurr na Ciste Duibhe, and we were greeted with a distant view of the Black Cuillin. Looking back the Brothers Ridge could be seen, and Ben and Jimmy took another deserved sit down at the summit cairn of the day's first sister and first Munro. My first Kintail Munro had a fine view down to Loch Duich. So onward we went along the superb ridge, and the three of us arrived on Munro and sister number two, Sgurr na Carnach. From here was a good view in retrospect of the ridge so far. 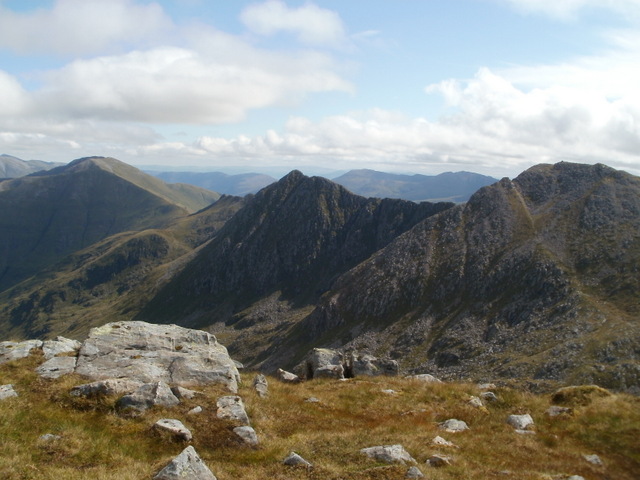 Then it was time to move on to the next bealach, followed by the steep pull up to the day's highest peak, the third sister and Munro, Sgurr Fhuaran. It was a popular summit on this day: Looking north there was a spectacular Torridon skyline. Sgurr na Sgine, the Saddle and Ladhar Bheinn made a fine picture too. Looking over Beinn Fhada, I think we could see Sgurr nan Ceathreamhnan and Carn Eige - confirmation or correction of identification here would be welcome! And so we looked on to the 4th and 5th sisters. Descending towards the next bealach, Jimmy noticed an interesting rock needle on the north ridge of Sgurr Fhuaran. As I'd said before, Ben had done really well, and by now he was satisfied to have collected his three Munros and was turning to thoughts of descending. So Jimmy and Ben bypassed the top of Sgurr nan Saighead, while I nipped up to the summit cairn, then met them again just below Beinn Bhuidhe. This was the point at which the WH route map shows the start of the descent to Allt a' Chruinn, and Jimmy and Ben took this option. I asked if they'd mind if I climbed the 5th sister, Sgurr na Moraich, and met them later. Jimmy was fine with the idea, so as they descended, I set off at a pace, not wanting them to have to wait too long.

On I went over Beinn Bhuidhe and down to the next bealach. The ridge up to Sgurr na Moraich was less well defined than that between the bigger sisters, but before long I was at the summit. She seemed like the forgotten sister, I was her only visitor at the time, as I looked back to her larger siblings, who'd all been well attended. There was a good view down the north flank to Innis a' Chro. But this little sister had attitude! To meet Jimmy and Ben I made a direct descent of the north-west ridge rather than return to the previous bealach as suggested by WH. And one steep, rough descent it was

. There was a fine view in front, though. Eventually the path to Allt a' Chruinn came into view, and there in the distance were my two companions: In time I reached the path with something of a crash landing. I was ready to march along to catch Jimmy and Ben up, when I felt a tickle around my face. Then I saw that one of Scotland's most notorious little insects had landed on my arm

. So off came the pack and out came the Smidge. Soon I was on my way again, and met my friends sitting by the side of the minor road in Allt a' Chruinn. So we walked down to the main road and to my car. All that was left was to drive Jimmy and Ben back to their car, before coming back to my B and B at Innis a' Chro, were I was to spend a most enjoyable nine nights.

It really had been a brilliant day out. A superb walk, great company, fine weather, magnificent mountains and excellent views. The day was rounded off nicely with haddock and chips at the Kintail Lodge Hotel

Lovely photos there Simon. Looks like you had a beautiful day. And on my birthday too! I clearly chose the wrong hill to celebrate

A great day for doing this walk, it's a cracker. That is Beinn Fhada you're looking over, with views to the two you mention as well as Torridon.

Excellent photos of a stunning ridge!

Great report of this route

MM, it was my son's birthday too, he was in Paris with his French girlfriend. I celebrated for him a bit further north!

Johnny, thanks for the id confirmation. I knew which one was Ben Fhada as I climbed it two days later. But it would have been embarrasing if I'd been wrong about Sgurr nan Ceathreamhnan, seeing as I guessed that one in Where's the Pic (Scotland), one of my only two wins so far

Monty, thanks for the advice in your Beinn Fhada and A' Ghlas-bheinn report not to descend A'G-b by the west ridge, that came in useful last week.

DP, your recent Forcan Ridge - Saddle report gave a good taster, I did those last week too.

Am hoping to get to these hills in the not too distant future subject to weather and family commitments. You certainly got a good day for it - makes all the difference when you can see the views - cheers

rockhopper wrote:Great timing simon - have just been reading through this again with some helpful detail

Am hoping to get to these hills in the not too distant future subject to weather and family commitments. You certainly got a good day for it - makes all the difference when you can see the views - cheers

Thanks, rockhopper, I hope this comes in useful. I haven't done Ciste Dhubh or the Brothers yet, I guess you might well be throwing those in the same day as the Sisters.