Done this walk back on the 26th August, and I can honestly say that it nearly ended my hillwalking career even though only a few weeks in to it. If this had been my first walk it may well have been my last. It was not enjoyable at all.

I decided to follow the same route as a previous report shows, start off along the road from Luss then up Beinn Eich then continue on to Doune Hill then back down via Glenmollochan back to the road to Luss. It would be my first double bag of Grahams and therefore tripling my Graham count : ) I got dropped off along the road just before the farms at 8:50am. It wasn't long until i got to the first stile where the sign is...this was also the first time of the day when i asked myself if this was such a good idea as the weather wasn't great and it looked fairly boggy underfoot. Anyway over the first stile and 'squelch', up to my shins in bog! Not even properly started and my feet are wet. 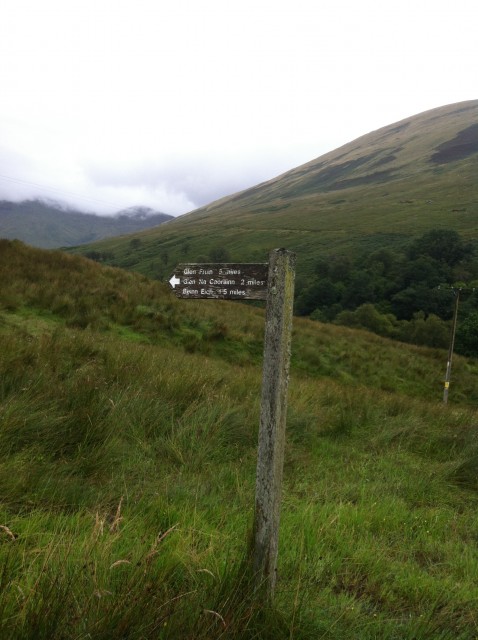 Off i trudged over the boggy fields with every step a 'squelch' heading for the next stile over the wall. Over this wall it got a bit steeper and not quite so boggy. The path wasn't too clear so i headed for a gate in another wall which i could only just make out. It was not a pleasant climb and the clouds showed no sign of shifting. Part way up looking back towards Luss with the farms below.

Not much to say about the rest of the way up Beinn Eich. A long hard, wet slog into the clouds to reach a wet cloudy cairn. On a nice day I imagine this would provide great views...but not today. Took me just under 2 hours to get this far. Not exactly the view I should be greeted with...

Didn't even bother stopping for any length of time on top of Beinn Eich so onwards it was to Doune Hill. The clouds briefly lifted a wee bit and i could see along the ridge for more than a few metres. Not really easy to get lost at this point...that'll come later! Anyone seen a ridge around here? oh...there it is! Eventually the summit of Doune Hill came into view, well kind of, an hour and a half later after reaching the top of Beinn Eich. By this time the clouds were back thicker and colder than before and to be honest, with visibility very poor and not having seen another single soul since i set off it was quite eerie. I even had a very brief wee scare when i got a bit disorientated and started heading down the hill the wrong way for a few minutes. I quickly got my head together, headed back to the trig point, got the map & compass back out and started my descent again. I know this might sound silly to the experienced souls out there but i really couldn't see where to go, there was no obvious path and the correct way according to map & compass just didn't feel right. I had to trust my map and compass 100%. In hindsight I'm pretty chuffed with myself for safely navigating my way down and it was a big learning curve just getting off Doune Hill. I finally could see Glenmollochan and the way out. The top of Beinn Eich to the right still in the clouds.

The route down was just a big long slog following a wee stream down the hill into Glenmollochan, The trek back along the base of the glen was again not enjoyable and just one big bog. The conditions just made this a lot harder than it should have been. By the time i got back to the road heading into Luss i was completely scunnered and miserable. Bagging 2 Graham's in one go for me should have been a great feeling...but not today.

Nuff said about this one...

RTC wrote:Sorry you didn't enjoy this walk. It a good one on a sunny day after a dry spell although glens around these hills are always boggy. The Luss hills are an acquired taste.

You're probably right : ) Someone mentioned they use the Luss hills for training in winter...maybe give it a go again later in the year... an acquired taste indeed : )

Aye...been there, seen that (or more often not seen that because of the clag

), done that and bought the tee-shirt....having spent a fair few days in the clag, rain, mist etc, as have many others, I can understand why thought it wasn't enjoyable...but we keep going out and every once in a while we get a cracker of a trip which more than makes up for the many days like this one

Don't let it get to you...think of the plus points...you did get some views, you got a bit stuck but managed to get yourself out of it and you learned a lot - pretty good day despite the weather

Not only that, you've now walked up more Grahams than quite a few people ! - cheers