What a Forcan Ridge!

What a Forcan Ridge!


After three days of wet, windy weather in Kintail, conditions finally improved on Thursday 30 August and I was ready to take on the ridge I'd looked forward to for quite a while. I parked in the layby just east of Malagan Bridge, otherwise the way was basically as per WH route description.

Looking up, the ridge was just visible behind Faochag and Meallan Odhar. After rounding Meallan Odhar by the stalkers' path there was a good prospect of the ridge. 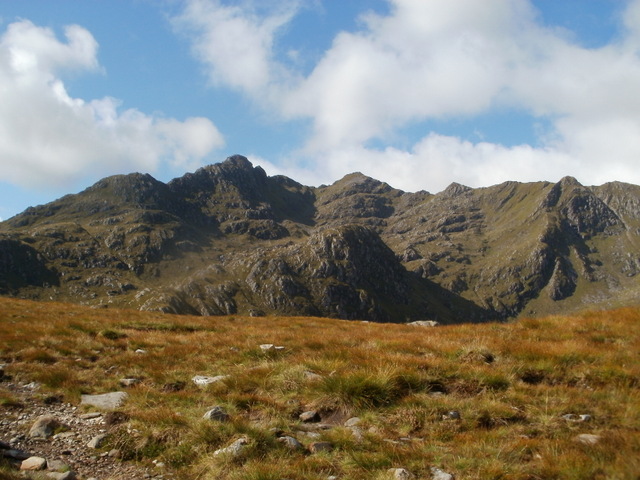 As I approached the ridge the drama ahead began to unfold. Moving onto the ridge, great views in retrospect and sideways revealed themselves. Following the crest, one section was taken a cheval. So onwards and upwards. I reached the top of Sgurr nan Forcan, and arrived at the well publicised descent pitch. To this point I'd largely taken the ridge full on rather than use the bypasses, and I'd thought of climbing down this pitch. But the lower section looked like a sheer drop, and I couldn't see what sort of holds were down there. So I chose discretion as the better part of valour and used the left hand dodge route. And so back onto the ridge and on towards the Saddle. At this point I looked back at that descent pitch... ...and if I'd been with a guide and on a rope, I could have managed that. But on my own and not secured, I felt my discretion had been justified. Perhaps that had already relegated my scramble from Grade 2 to Grade 1, and I was ready to get moving to the summit. So I quickly bypassed the next knife-edge by a path on the left. I reached the north-east top of the Saddle, with a fine view west over to Skye. I looked on to the south-east top and the trig point, and made my way there along the summit ridge. At this point, I must sat that An Diollaid, a.k.a. the Saddle, is one of the finest mountains I've ever climbed, and the Forcan one of the greatest ascent routes I've done.

On the summit ridge there were good views around Loch a' Coire Uaine. Next I dropped down to Bealach Coire Mhalagain, and just beyond it's lochan I encountered maryhillmoose from the WH forum. She'd done the Forcan too, and like me had taken parts of the ridge full on but dodged the descent pitch, which she reckoned she too would have managed with a rope.

And so on towards Sgurr na Sgine. On reaching the summit of this second Munro, a magnificent panorama unfolded. South over the head of Loch Hourn: Back to the Saddle and the Forcan: The Sisters and Brothers of Kintail, and in front of them, my next target, Faochag: So I made my way over Faochag, and began the steep descent. Further down, with a bird's eye view of the glen, I could make out the layby where I had parked. Yet further down, the path became muddy and slippery. Typically, after avoiding any mishaps on the Forcan Ridge, right at the final hurdle I went flying and landed on my backside in the mud

The clear path led to the Allt Mhalagain, but there was no footbridge here, and the burn was a bit too full to ford comfortably: I made my way nearly 200 metres upstream to the footbridge at NG 970 134, which now has no parapets, and the paths to it appear to be falling out of use. I wonder how long this bridge will remain secure, and if it will be maintained in future. But I crossed it with no problem, and was soon back at my car.

This had been a truly amazing day in the mountains. I went back to Innis a' Chro and my B and B, and got showered and changed. Then I went for a fine evening meal at the Jacobite Restaurant, sitting at a table with a beautiful view over Loch Duich

Good stuff simon - really must get back for this some time as I missed it last time. And another day of good weather, no wonder you had such a great time !

simon-b wrote:Following the crest, one section was taken a cheval.

a foot on each site or sitting down sliding along as well ?

Wow, your pics are amazing

As always, I did this in rain and clag.. The rocks are right slippery over in Glen Shiel when it rains was the lesson of that weekend

When you look at this on Google Earth, someone has uploaded a picture of it covered in snow and it looks amazing

Well done Simon, that looks like a great day out.

Thanks very much for the comments.

Rockhopper, two days good weather out of eight isn't bad, I guess. You certainly had better conditions than me for S. Glen Shiel ridge. But at least the midges stayed away. The a cheval bit involved a bit of shuffling (without a saddle, ironically).

Cheers Monty, photos can only be as good as the view they capture. The panorama from Sgurr na Sgine was superb.

Basscadet, you do pick some conditions for these sharp ridges, don't you? My heart nearly stopped when I read about your tumble on the way to CMD from the Ben, goodness knows what your heart did! We've all been up in rough weather, although I tend to wait for a calm day if I'm going to have sheer drops close on both sides. But I admire your spirit of adventure.

Fudgie, I bet it would be a great route to do in winter conditions, properly equipped of course.

Another superb report Simon. I never got the chance to do these two when i spent a week in Kintail in August but so looking forward to doing them.

Johnny Corbett wrote:Another superb report Simon. I never got the chance to do these two when i spent a week in Kintail in August but so looking forward to doing them.

Cheers Johnny. I hope you get good weather when you do this, you'll love it.

Looking forward to getting up into these hills, hopefully very soon!

I'll make sure I do this on a nice day

Great stuff Simon , some lovely photos there and good detail of the ridge , sounds like a fine day

Dave, you'll enjoy these. Usually I'd be wary about taking a 6 year old somewhere like the Forcan ridge, but your little lad may well be an exception. I bet he'll be nagging you to take him onto the ridge if he sees it!

Stuart, if you get good weather it'll be a very nice day

JW, I hope this helps to tempt you onto some Munros north of the Great Glen, the scenery is amazing up there.

PS. I've since read in Bill Birkett's book, Great British Ridge Walks, that the descent pitch on the ridge looks much worse than it is. I should have taken it on!

Great report with some stunning pics, that pitch does look scary, Well done

Great report with some stunning pics, that pitch does look scary, Well done

Thanks, LH, but bypassing that pitch wasn't scary.