The visit to Boyne Castle was a fantastic experience, and we still had half a day so a good opportunity for more lurking around the coastline

The East Head walk seemed a nice, short stroll to add to our Portsoy-Boyne expedition

our_route.gpx Open full screen  NB: Walkhighlands is not responsible for the accuracy of gpx files in users posts
We parked the car in Portsoy Harbour and first took a short lunchtime break in Links Bay, with nice views to the rocky beach: 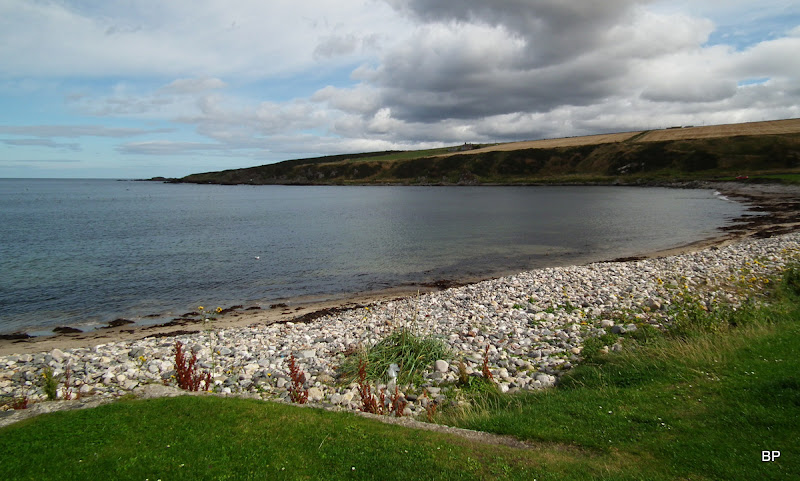 After tea and sandwiches, we visited the Salmon Bothy (the white building behind me). A fantastic addition to day's trip and highly recommended! 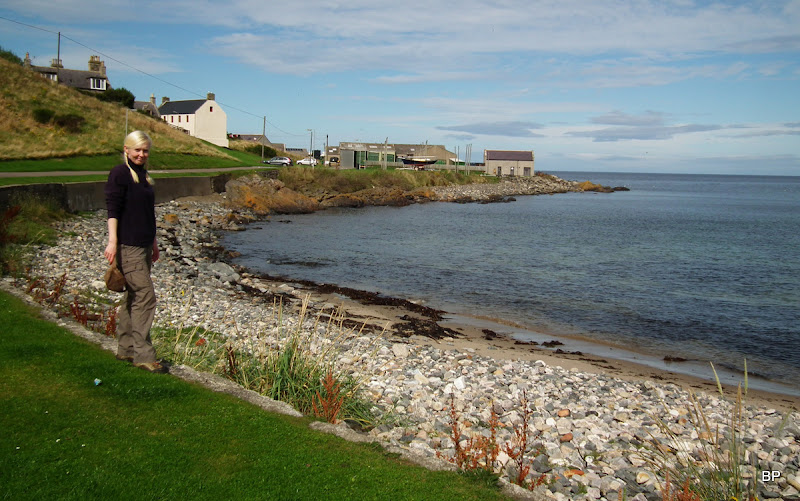 The walk itself is on a good path up the cliffs, but we made a slight mistake. We took the lower path first and ended up among the rocks at the bottom of the cliffs: 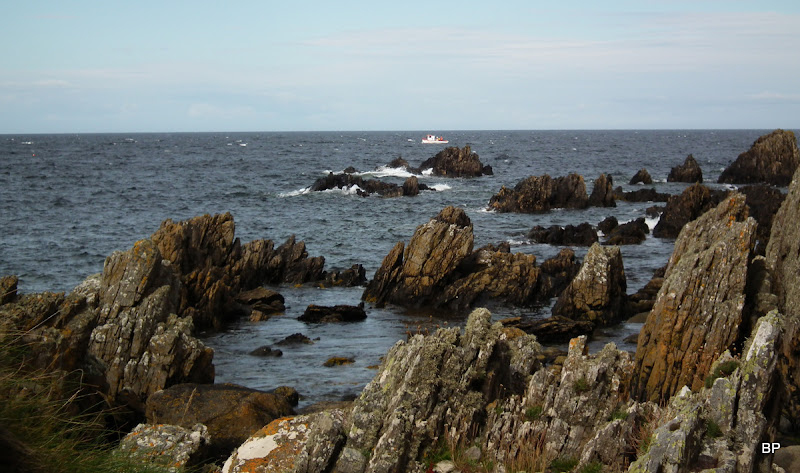 An interesting perspective across the bay back to Portsoy: 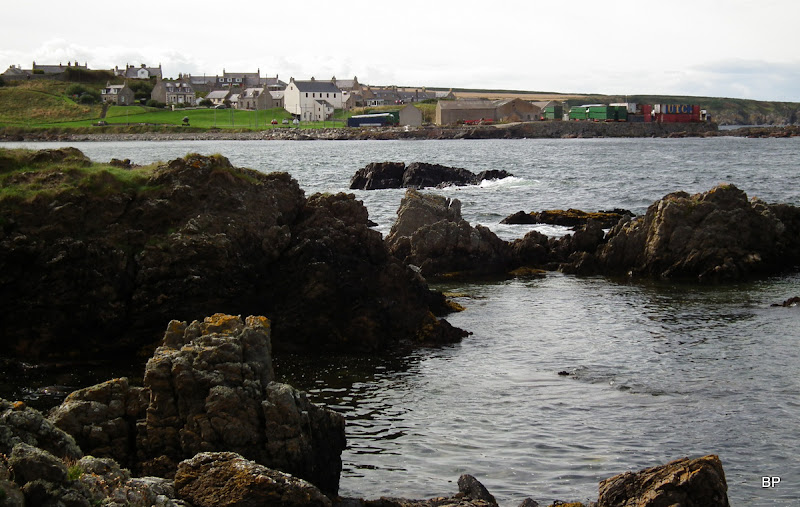 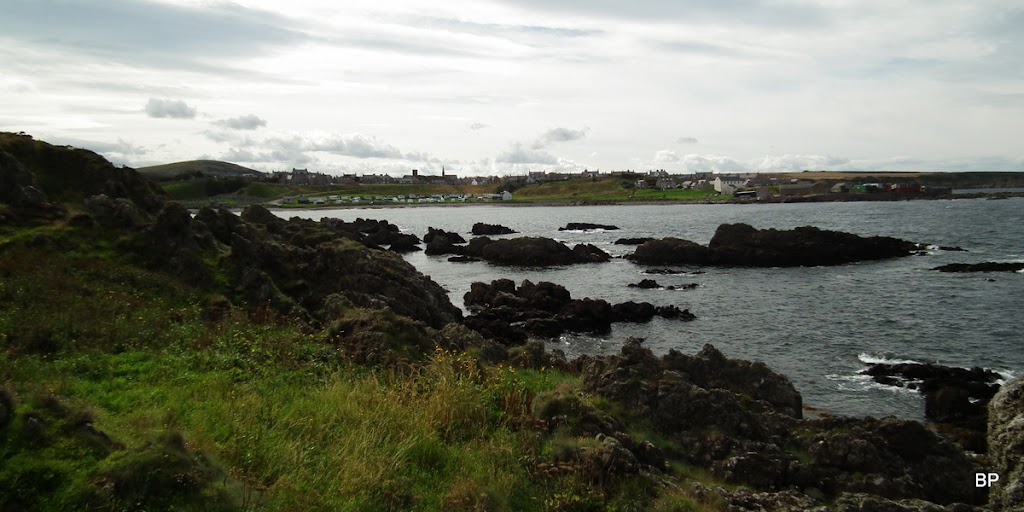 The lower path soon disappeared, we continued our exploration though: 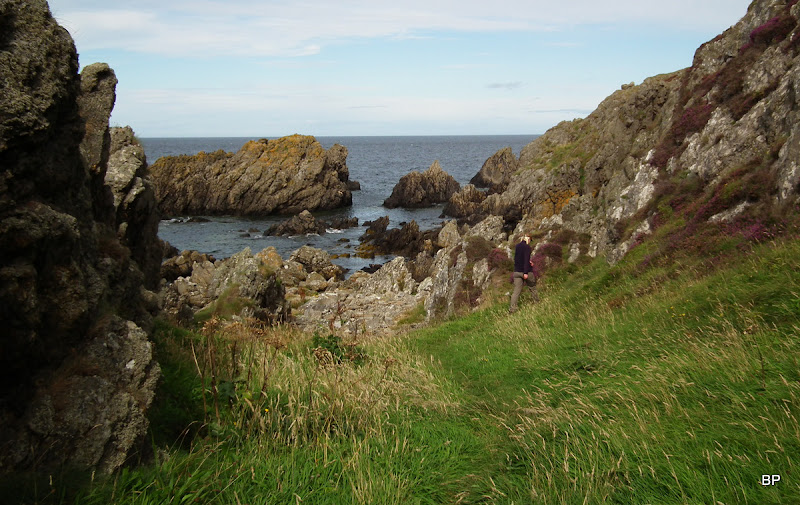 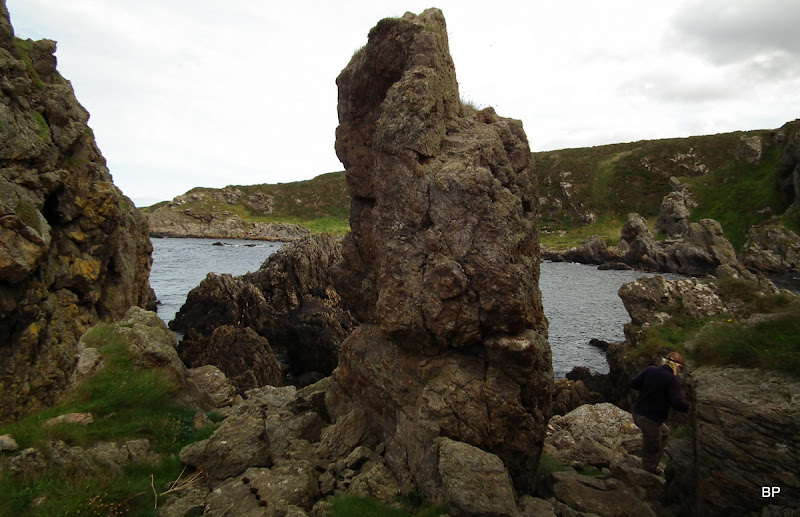 The tide was high and unfortunately we couldn't go around one of the more prominent rocks to the next bay. Nevertheless, it was an interesting, quiet spot and we stood there for a few minutes, listening to the waves: 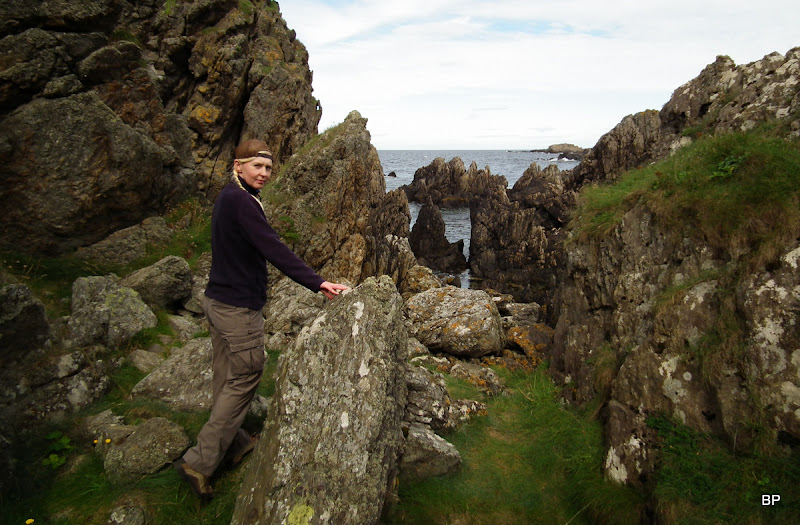 We returned a short distance along the low path and scrambled up the cliffs in the first suitable place. We had to negotiate through some prickly gorse, but after the painful encounter with nettles in Boyne, I didn't mind

Now we could see the first small bay from above: 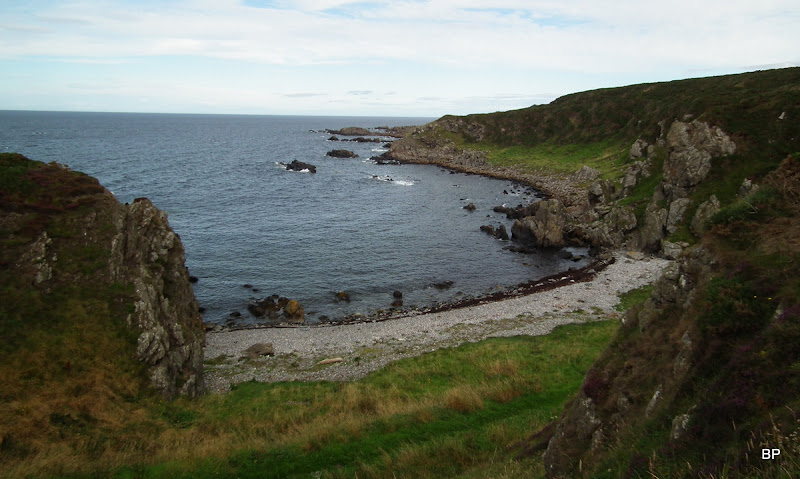 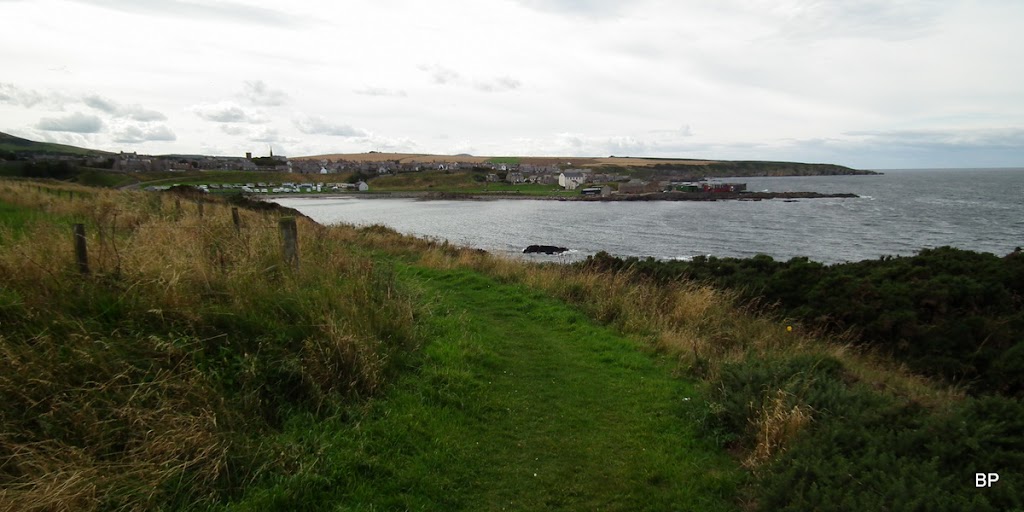 The wide, comfortable path took us to a gate - I spotted a warning written on the wood. At least you know what you are up against! 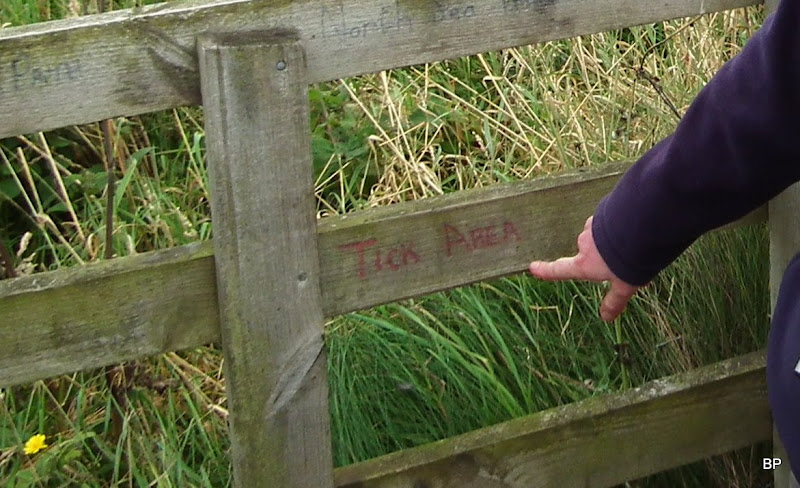 Past the gate we enjoyed a lovely, easy stroll with some good views to the sea: 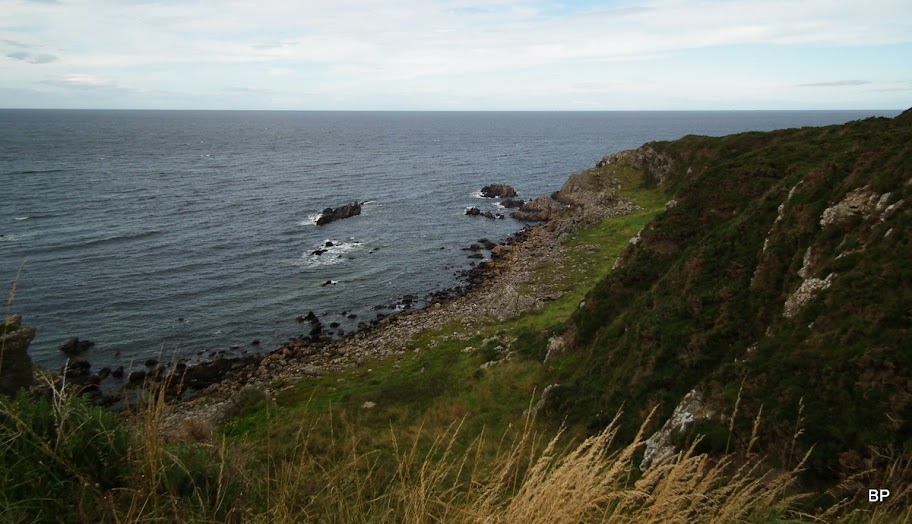 If you plan a picnic en route, there is even a bench provided: 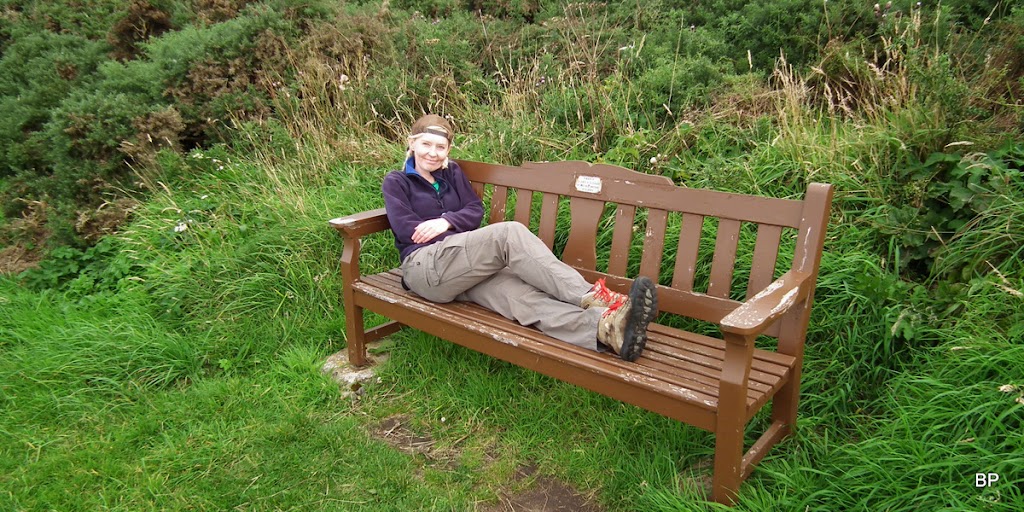 The path leads towards the East Head: 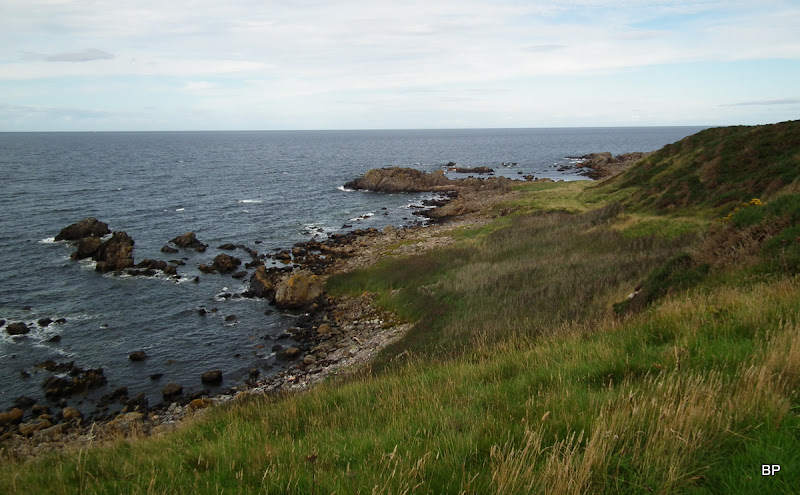 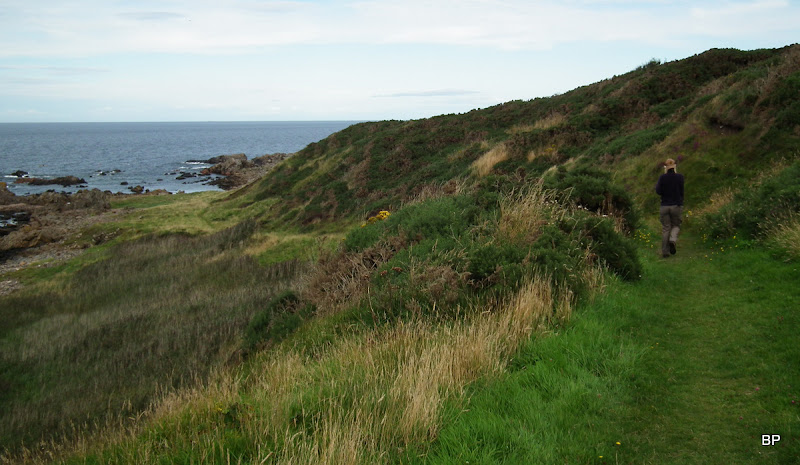 The route is still quite obvious here, the path a bit overgrown but easy: 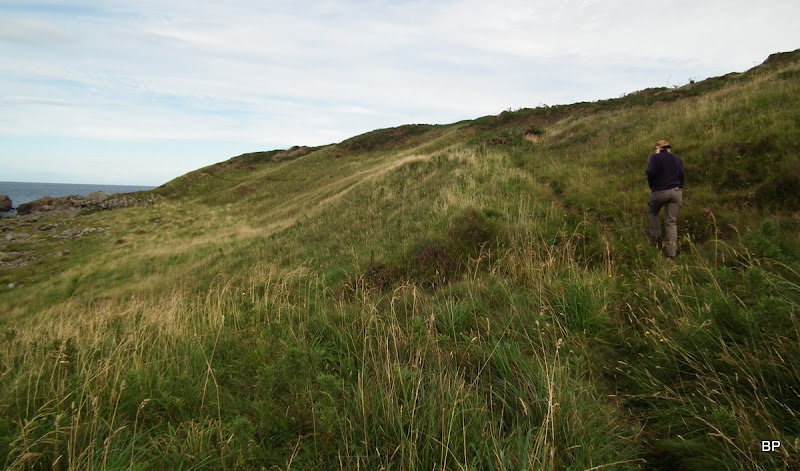 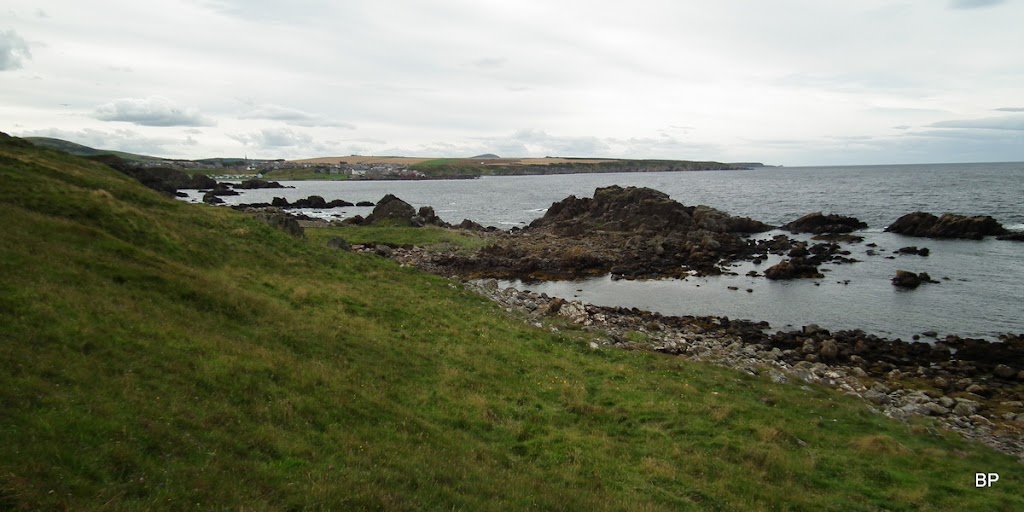 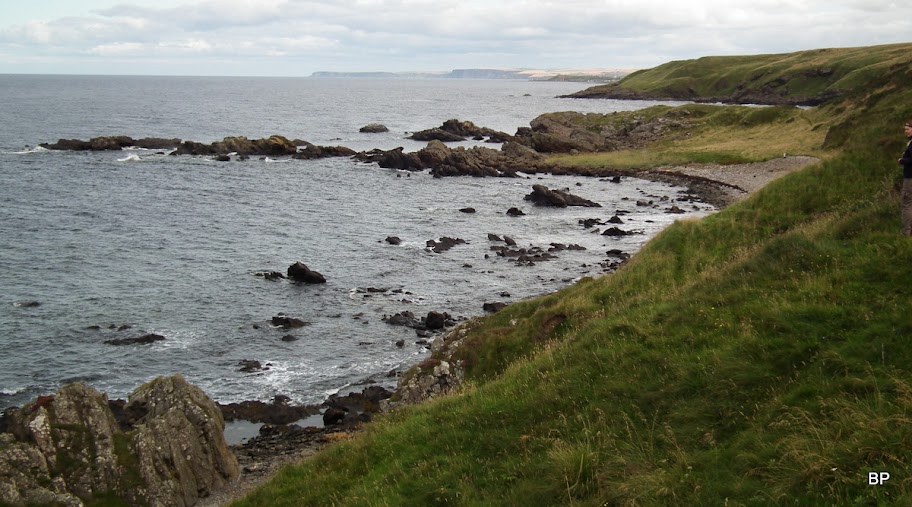 We could see all the way to Whitehills now: 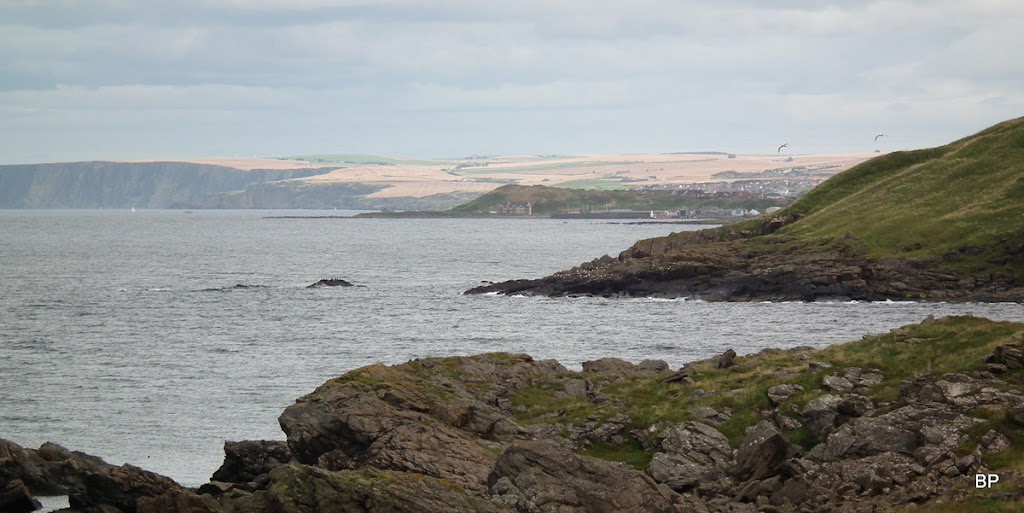 The path becomes more sketchy here, but the terrain is still easy enough to do some more lurking

I was disappointed though, having not seen many sea birds on the rocks. Usually the coast here is full of them. 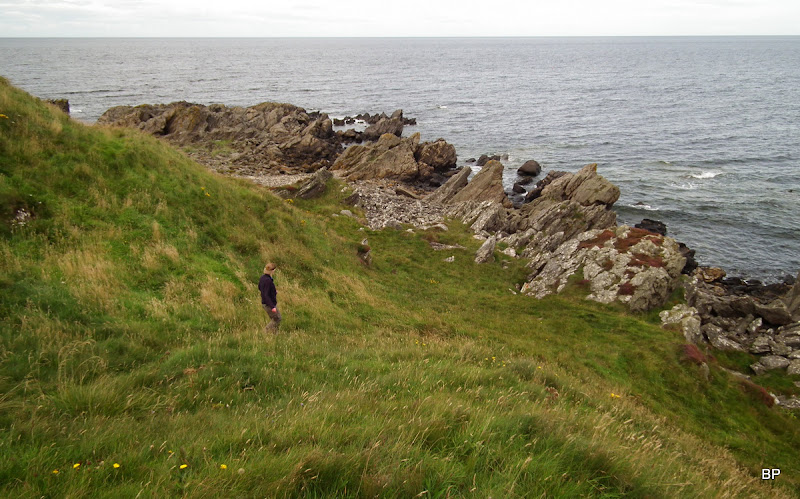 The sketchy path goes all the way to Strathmarchin Bay. I always have the same problem when walking along the coast. No matter how far I've walked, I want to see what is behind the next bend... 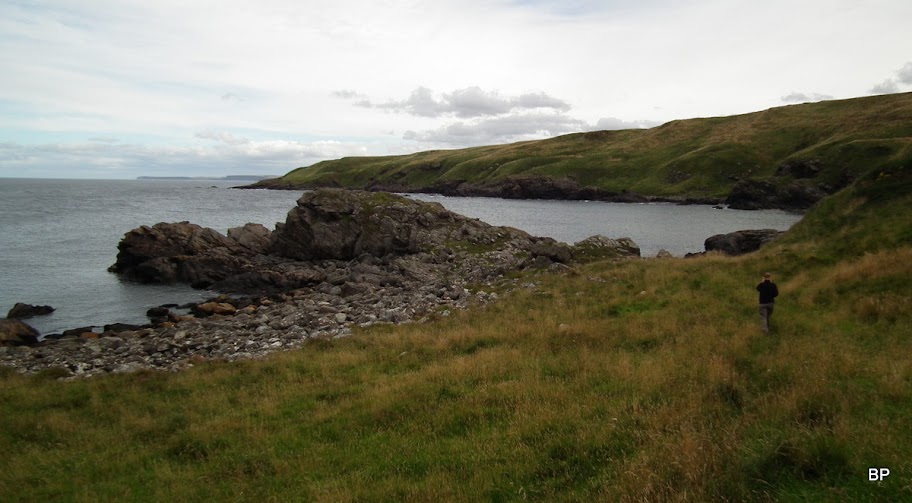 ...and this time the next bend brought a nice surprise: 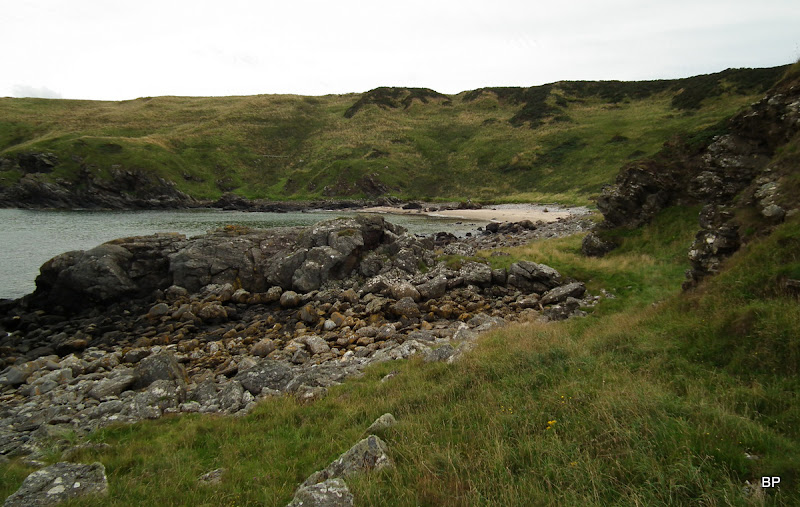 This lovely, quiet sandy beach is another hidden gem of Portsoy area: 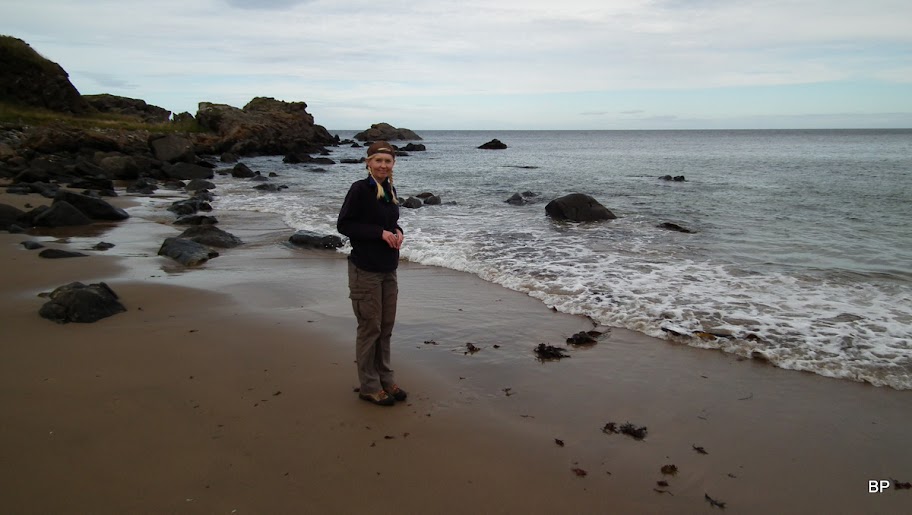 We decided to stay here for a while. The path ended on the beach, I don't know if it would be possible to continue along the cliffs to Whitehills, maybe there is a passage but there was no obvious route when we studied the grassy slopes to the east...
The beach was nice enough prize for us, anyway: 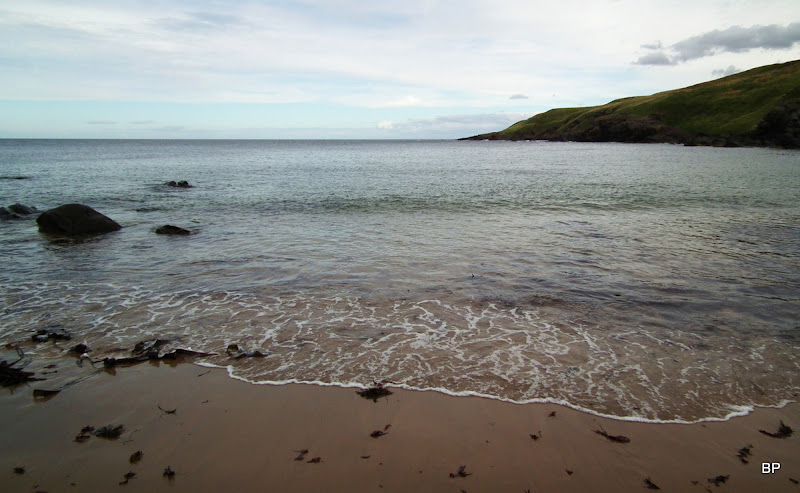 The tide was slowly going out so I took a few brave steps into the water... Cold as ice... 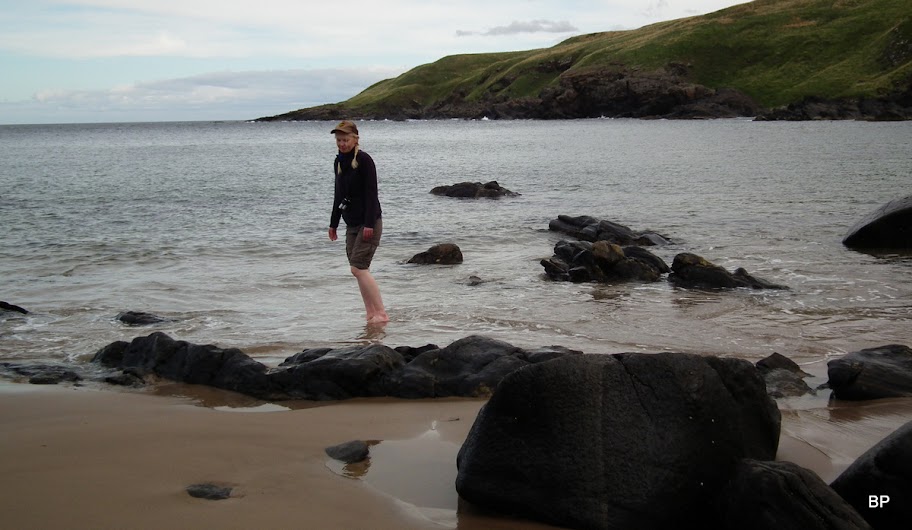 ...but only for the first five minutes! 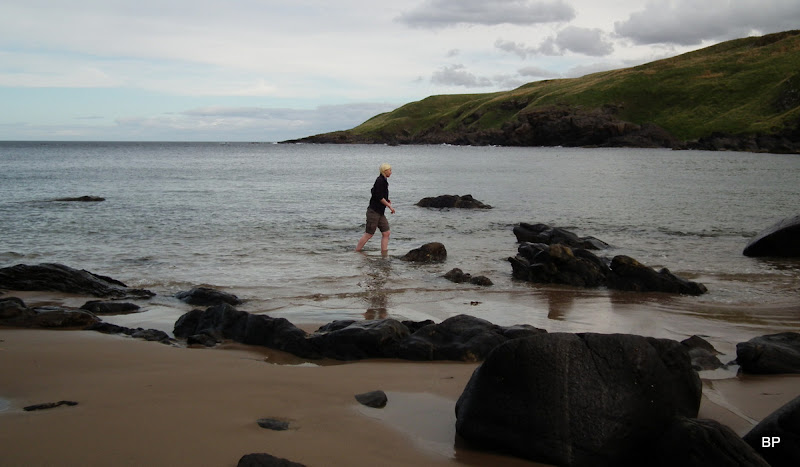 ), instead he busied himself with photographing a wee birdie in the bay. The swimmer was quite a distance away from us so the final result is a bit blurred, even after zooming: 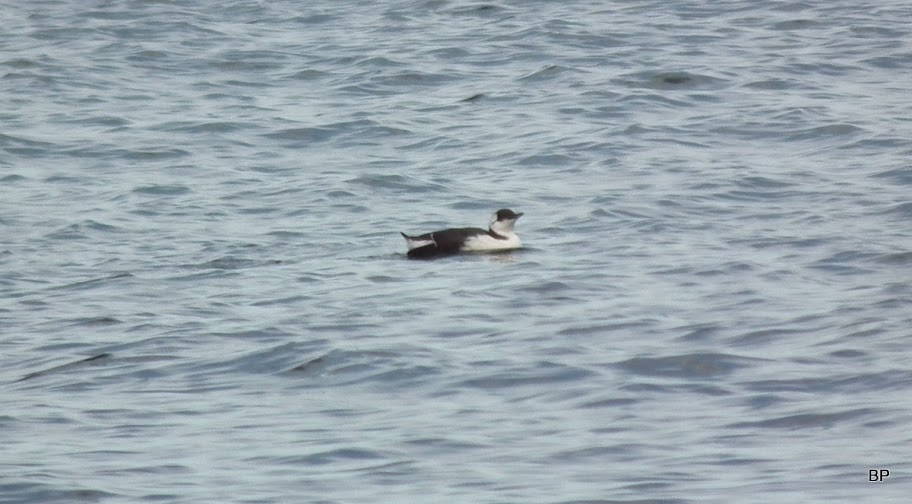 I'm not sure which species it is, I think it looks like a little auk?
Eventually we left this cosy spot and returned to Portsoy, enjoying the coastal views all the way back: 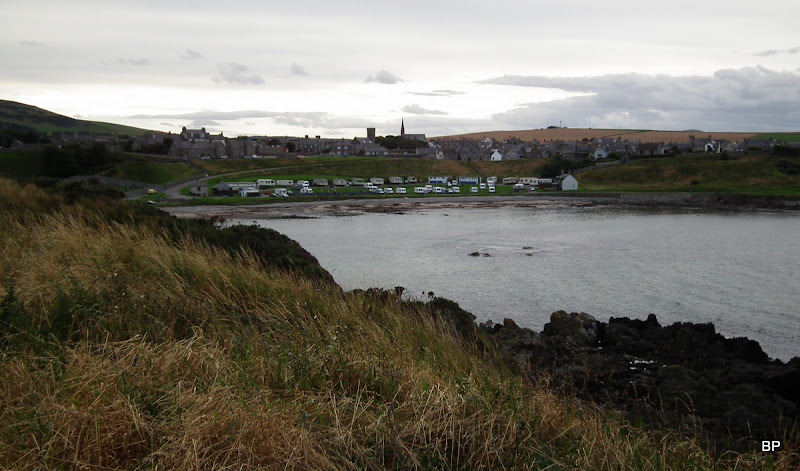 at least within a reasonable driving distance. We've walked all along the Moray Coast Trial (in stages of course), now every trip takes us further east. Next target - Crovie and Gardenstown?

Another cracker BP, I love to see any part of the UK coast. I think I like your initial choice of low level path better than the cliff top 'official' one. Strange that there were so few birds about, it's usually teaming with them along that coast

maybe they were all out fishing

I did a short trip from Portsoy to Whitehills and back; my preparations were watched with interest.....

This young seal was very curious about the contents of my boat and was totally unfazed by human presence - I suspect he may cadge scraps from the fish merchants at the top of the slipway!

I stopped at Boyne Bay for a bite to eat. the pebble beach here is quite steeply shelving at the water's edge but easier hard up against the cliffs at the western end.

Looking along the beach at Boyne Bay. I usually avoid this during the nesting season as there's good shingly bits whch are used by a variety of birds. Another regular visitor to the bay (and indeed many of the wee bays along this coast) are Roe Deer. there's good grass and nothing much else to graze it so although not typical deer habitat it makes perfect sense"

The bird you#ve photographed is a juvenile Guillemot. The cliffs are really quiet now that the breeding season is over but there were plenty of birds offshore including Guillemot, Black Guillemot, Razorbill, Long-Tailed Duck, Gannets, Terns and the usual Cormorants and Gulls. Quite a few Grey Seals towards Whitehills but no sign of the Basking Sharks which were near Portsoy the previous week.

It really is a super bit of coast

Yep, the wee sea bird is a juvenille Little Auk.

Just found this when looking for something else.

It is possible to walk from Boyne Bay to Whitehills.
The official coastal path route uses part of the B9139 road, but with a bit of care it is possible to clamber up some rocks at the east side of Boyne Bay and continue along the cliffs, joining the official path further along. The official route misses out a lot of lovely coast.

I did it the opposite way 3 years ago, and also visited Boyne Castle. I grew up in Whitehills, so know the area well, but hadn't done the walk for about 30 years.
There are some lovely beaches, great for a picnic. Wear waterproof boots, the ground is very boggy towards Whitehills.

Nice BP,brings back memories of a few golf weekends spent in Portsoy,your pic of you paddling in the sea reminded me of my mate doing a Reggie Perrin for 20 quid along at Cullen golf club,daft sod near froze to death