After a slight reaction in my dodgy leg to climbing Meall nan Tarmachan a couple of days rest had soon put it right and I was feeling ready to tackle something else. I’d had my eye on Schiehallion for the last couple of years after first gazing up at its perfect conical form from along the banks of the River Tummel on a previous trip. It seems everywhere you point a camera around here she seems to sneak into frame making it impossible for anyone to ignore for too long (especially a tourist like me.) Finally the itch to climb it had gotten the better of me. 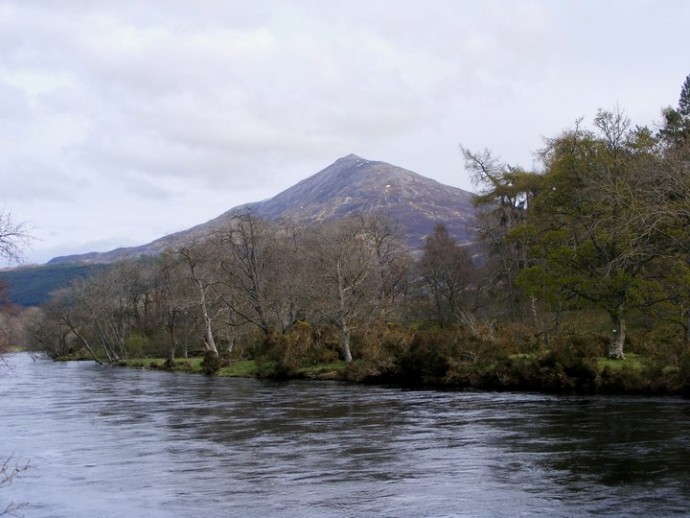 Schiehallion from the River Tummel on a previous holiday

Trying to clear our heads from the excesses of the previous night’s drinking session (well we were on holiday after all) it was a later than planned start and Rachel dropped me off at Braes of Foss car park at 11am. We’d already decided that it’d be best if Corby sat this one out rather than trying to control him on the lead across the boulder fields. He’s a bit excitable at the best of times around other dogs, people, sheep, birds . . . and well anything else that moves to be honest! So in expectation of a busy hill he was off for more low level walks with Rachel for the day. 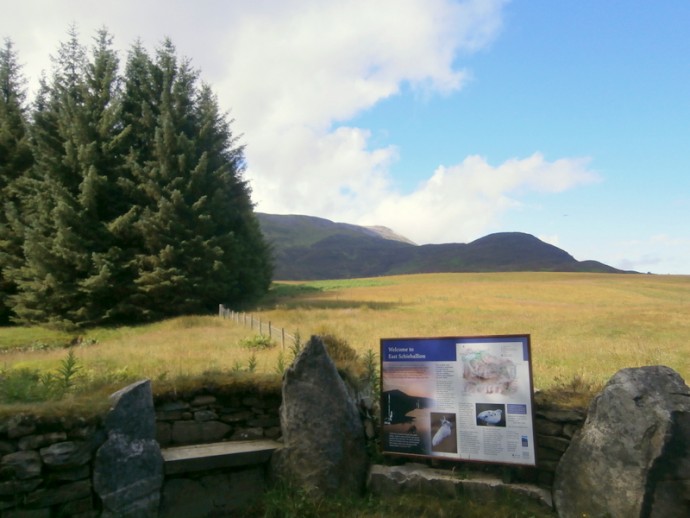 Just in case you don't know where you are.

Now I’m guessing it may not be everyone’s cup of tea but the John Muir Trust path really does provide for easy walking for the majority of the climb and even in the steeper sections the stone staircases seem perfectly pitched. 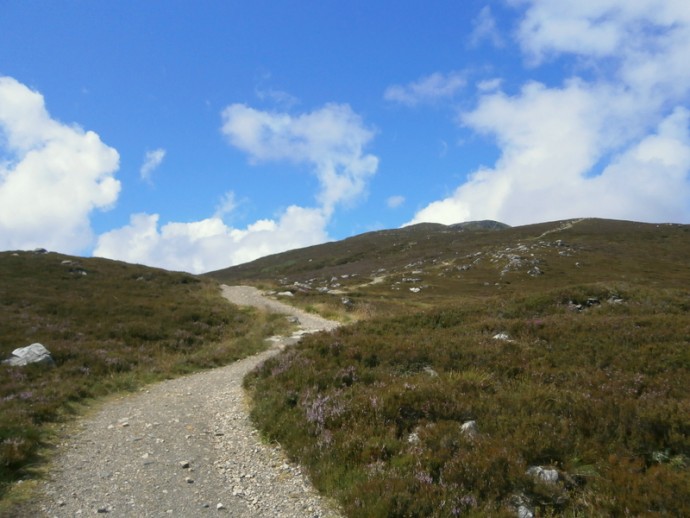 Up the JMT path. All that's missing is a carpet.

The weather forecast had indicated showers over Perthshire for most of the day but between the clouds it was warming up nicely and I pulled into one of the convenient little “lay-bys” off the path to discard clothing and reach for the sun cream. While I was busy admiring the views back toward Loch Tummel and the distant Beinn a’Ghlo I was soon passed by an athletic looking couple who had appeared from out of nowhere behind me. We quickly exchanged pleasantries and they raced on ahead of me into the distance . All the while I could hear the male counterpart urging his partner to “Power Up!” (Complete with an encouraging “Grrrr!”.) whenever she dared to lag behind. So as I set off I couldn’t help but wonder what they’d made of my more sedate approach to hill-walking. That was until the sweat started pouring again and I soon realised a little bit more of their fitness wouldn’t go amiss. 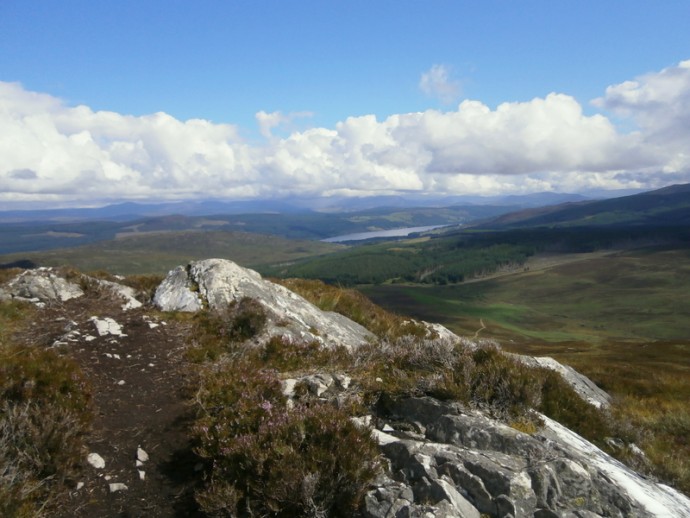 Upon reaching the first summit the path started to get rockier underfoot as it passes the large stone cairn shelter, winding its way, sometimes indistinctly, through the rock-strewn landscape toward the next summit and the full on boulder field. It was here I learnt the very valuable lesson of paying more attention to where my feet are going on boulder fields instead of gawping at the scenery all the time. One step onto a loose rock and I was flat on my back counting clouds. Fortunately I’d picked my moment well and I was out of sight of other walkers with no damage to body or pride. 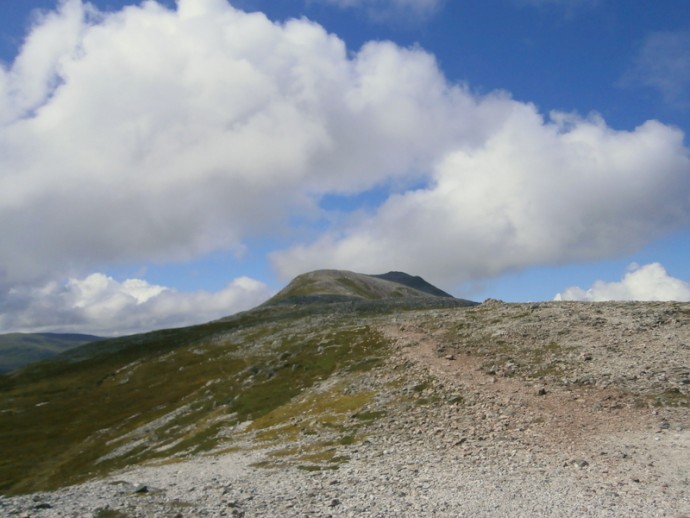 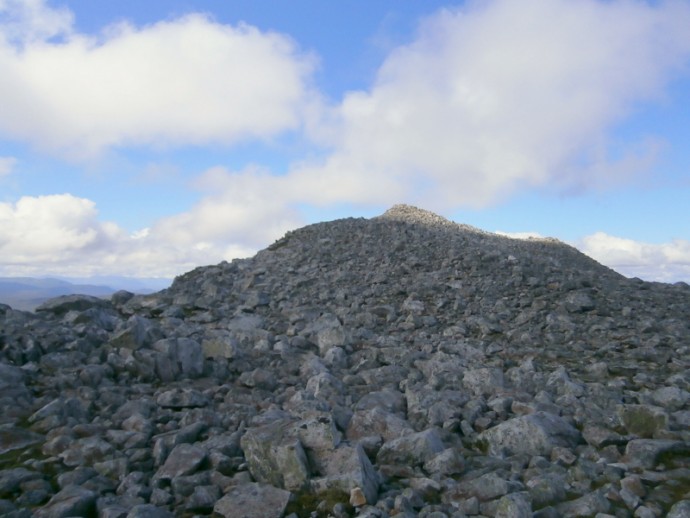 At the boulder field there is no obvious path and it seems there’s nothing to do but pick your own way across but I headed to the left hand side on the final climb where there is a path of sorts over a grassier verge, although this does run close at times to the drop into the valley below and I'd imagine not so advisable in poor weather. 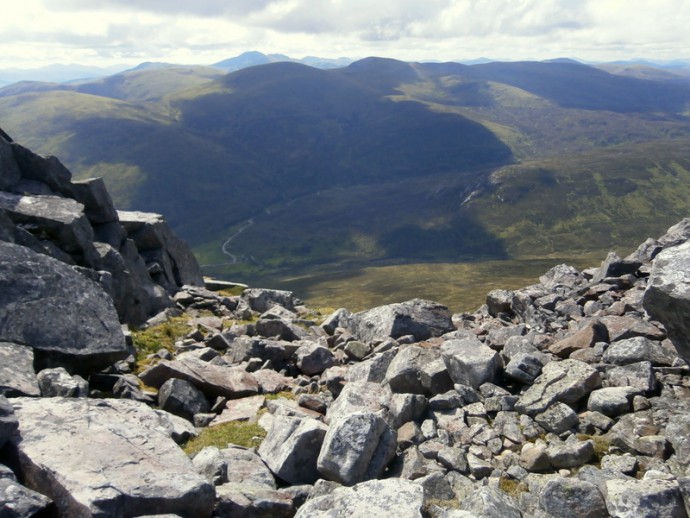 View over to Ben Lawers Range

From there it was an enjoyable last walk over on top of the rocks until I arrived pretty much on top of the small cairn. There were a few other groups of walkers milling around at the summit when I arrived but not as busy as I’d initially expected so it was easy enough to find a quiet spot to soak up the stunning views, have some grub and even partake in a spot of sun bathing. In fact I spent quite a while at the summit mindful that I had plenty of time before Rachel was due to pick me up again and I’d rather wait up here than back in the car park. 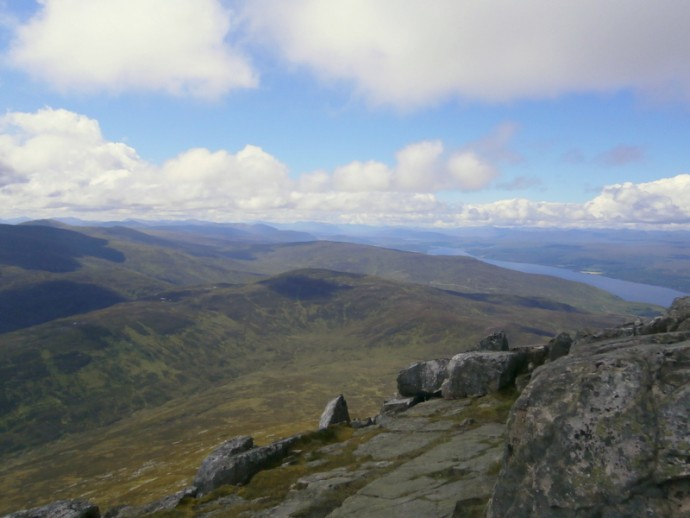 After a good half hour break I could see more people back along the ridge and just sat and watched as they picked their different ways zig-zagging across the boulder field. It briefly reminded me of the Vortex from the Adventure Game (showing my age here.) Sadly with no talking Aspidistra’s in sight and with none of these new arrivals getting “evaporated” I decided it was time to head back down the way I came before the summit became too crowded. Maybe it's just me or does anybody else see the face in the shelter?

It was a slow amble back down enjoying the quartzite in the rocks sparkling in the late afternoon sunshine and I arrived back at the old sheepfank just as Rachel & Corby were walking up to greet me.

However Rachel's short-lived happiness to see me quickly waned as I set about boring her silly with tales about my day. I was told that if I ever tell her to "Power Up!" on a walk I can expect to be slapped very hard, that she's far too young to remember The Adventure Game, or any gameshows with talking plants for that matter, and that if I continue to shout excitedly “I was up there!” everytime we spy a view of Schiehallion, as I did for the remainder of our holiday, I will soon be looking for a divorce lawyer. Cheers RTC and apologies for the late reply

Gotta admit you're reply had me questioning my eyesight & wondering if i'd missed the trig point for a brief moment. Thankfully Google informs me it was taken out by "Lightning" - or is this Gaelic for mindless vandalism? . . . . I gather the bolt that used to hold it down is still in situ though!

This made me laugh Charlie, great report of a fine wander. The 'power up' thing is something I've seen myself and it tickles me (each to their own I guess)

Like your lovely wife, I too have no idea what that game show was......but I wish the hell I'd seen it

Don't forget to remind your wife later tonight, (just as she is falling to sleep would be best) that you have been up to the summit of Schiehallion

I often point to the Malvern Hills from our bedroom window and inform her how much smaller they are than Schiehallion . . . then I go and sleep in the spare bedroom

This explains a lot, according to Wiki - I was 16 when the show first aired and 22 when they put it out of its misery, but during those years I had already discovered women and TV was no longer of interest.......... unless it was match of the day of course

I often point to the Malvern Hills from our bedroom window and inform her how much smaller they are than Schiehallion . . . then I go and sleep in the spare bedroom