On the previous Sunday two friends and I did the linear 5 Sisters of Kintail walk. Two cars, no problem. Nearly a week later, I was fancying the S. Glen Shiel ridge but I was alone with one car. My B and B hosts said they were travelling to Carrbridge early on the Saturday, and kindly offered me a lift to the Cluanie Inn. But the weather on that Saturday was apalling

, so I had to graciously decline.

The forecast for Sunday looked better, so I decided I'd go for it whatever, and worry about getting back to my car when the time came. But during breakfast, I was asked if I still needed a lift

. You can imagine how grateful I was! So I set off in my own car 10 minutes in advance, parked near Malagan Bridge and changed into my boots. Then I was picked up and dropped at the start point along the lane near the Cluanie Inn. I expressed my heartfelt thanks to my host, and set off along the track to do the walk as per WH route description. Naturally I was in high spirits looking back towards the inn, knowing my car was waiting for me at the other end. The mist was down on Creag a' Mhaim, but looked as if it might clear. 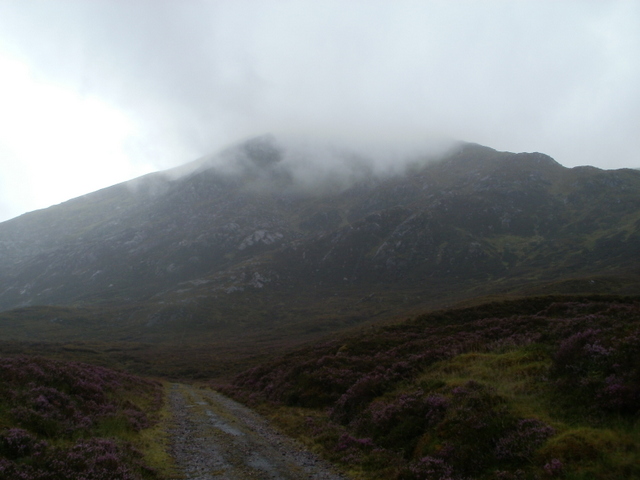 There was a little light rain but nothing too bad, and in time I reached the right turn from the main track. I headed up towards the day's first summit, and the cloud still looked as if it could go either way. The top of Creag a' Mhaim had no view when I reached it, and the rest of the day was spent in and out of the clag. On leaving the summit, Loch Cluanie was just visible below. 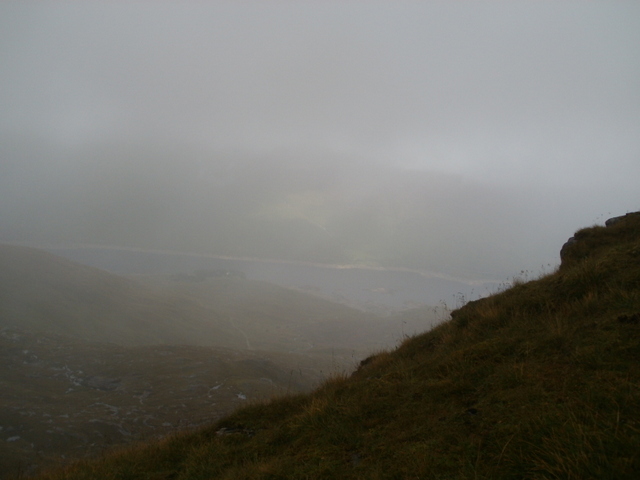 Moving along the ridge, views began to appear. Druim Shionnach was just below the cloud when I reached the top. And so I continued along this fine ridge. The day's third and highest Munro, Aonach air Chrith, began to appear from out of the mist as I approached it. On the summit, the mist seemed half there and half not there, but I soon dropped out of it as I carried on west. Looking back, I noticed I wasn't alone on the ridge. By now the wind had started to pick up, not quite blowing a gale, but there were some strong gusts. Bits of the ridge were quite narrow and airy, something I usually enjoy, but not when there's too much risk of being blown off! 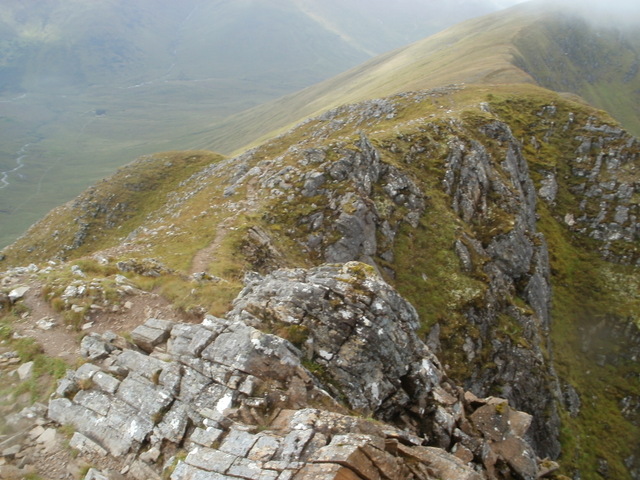 So I progressed carefully, ready to brace against any sudden strong gusts.

Continuing, there was more fine scenery along the ridge, and left to Gleouraich and Loch Quoich. 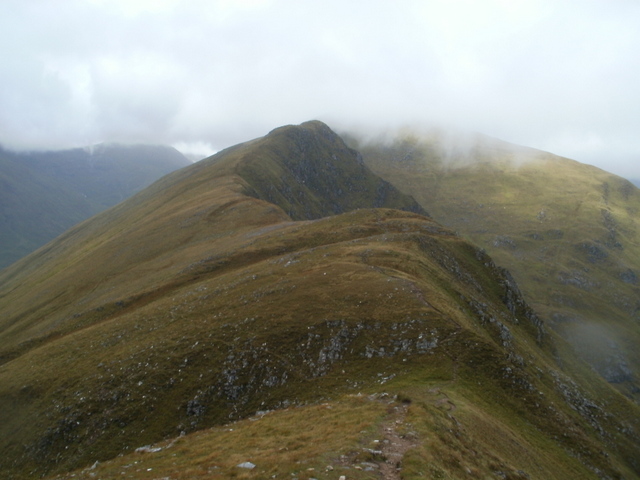 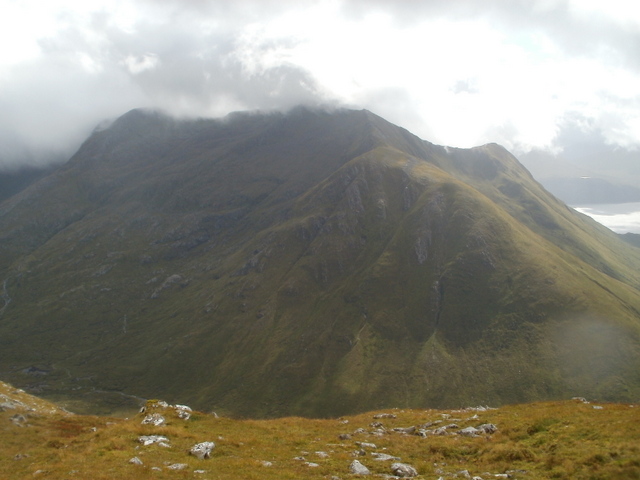 In time the summit of the next Munro, Maol Chinn-dearg, was reached. 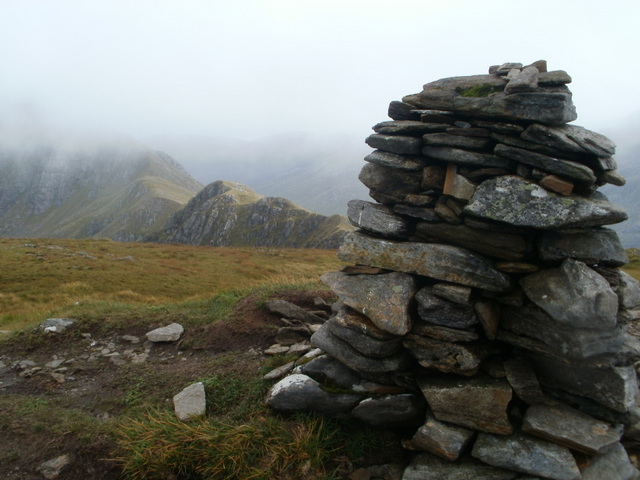 The clouds stayed above for a while allowing more excellent views, moving further along. 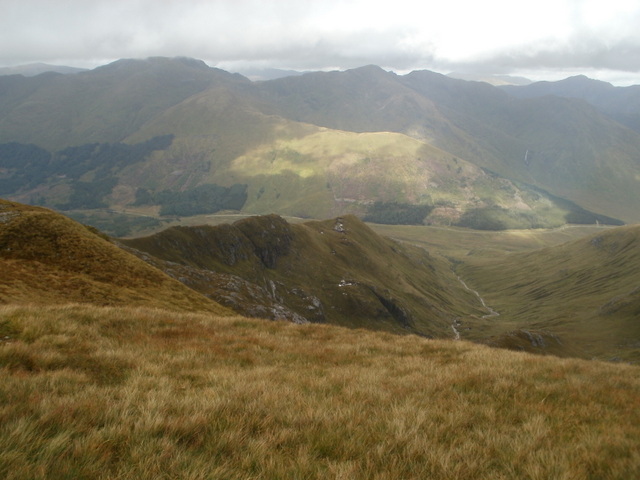 But as I approached Sgurr an Doire Leathain, I ascended back into the mist. So I had to look carefully for the detour to the right from the main ridge, which led to the summit of this Munro. I reached the cairn, turned back towards the ridge, and met the first of the three men I'd seen behind me on Aonach air Chrith. He said they were doing the same seven Munros as me, so I asked what they were doing for transport. They had one car, parked at the Cluanie Inn. I told him that if we timed it right, they'd have a lift back from Malagan Bridge. He thanked me for the offer, but didn't want me to be waiting around too long for them.

And so I got back onto the main ridge. Next, it was on towards the shapely peak of Sgurr an Lochain, the days sixth Munro... ...with more spectacular scenery along the way. On the summit of Sgurr an Lochain, I just about had a view. Carrying on further, the weather wasn't improving. I decided to bypass the minor peak, Sgurr Beag, using the path to the left which led to the bealach below Creag nan Daimh, the day's final Munro. The weather still got no better, but a nice view to the left stopped spirits from sinking. And so on to the final climb up to Creag nan Daimh, with wet, misty weather by now well set in. 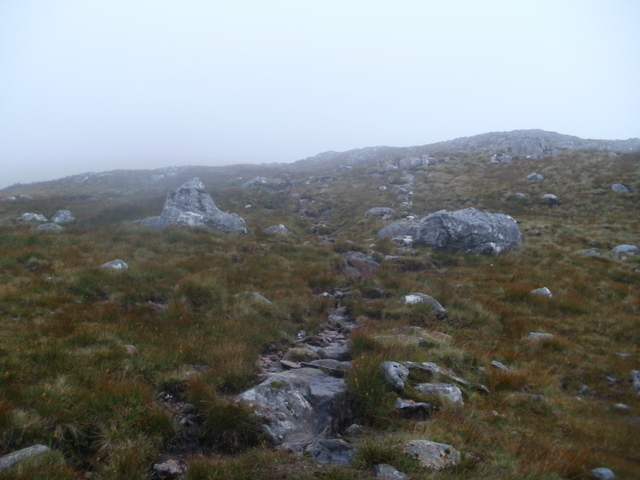 Soon after reaching this last, cloudy summit, I was caught up by the fastest of the other three walkers. He said he'd accept my offer of a lift. We would walk on ahead, I'd give him a lift to the Cluanie Inn, them he could drive back to Malagn Bridge and collect his friends. And so the problems of this long, linear Glen Shiel walk and its transport strategy had been soved for all of us

About 150 metres after the summit, there was a point on the path which caused confusion in the mist. There seemed to be a junction of paths not indicated on the map, one heading right into a steep corrie and the other climbing a steep cliff. Heading down into the corrie certainly looked wrong on the map, and it turned out the steep cliff wasn't anything like as big as the mist made it look. A short scramble up the cliff soon revealed the drystone wall and the continuation of the route alongside it.

Eventually we reached the correct right turn, followed the cairns, and ended up on the stalkers path heading downhill. We had to cross a burn in spate, but there was a shallow ford which we paddled across without too much trouble. On reaching the glen, the clear path did not lead directly to the footbridge across the Allt Mhalagain at NG 970 134. I mentioned a similar thing in my Saddle - Sgurr nan Sgine report. And the burn was definitely not fordable at this time. So we moved to the footbridge and crossed the burn.

My companion on the descent and I finally got around to introducing ourselves, his name was Clive. Earlier he'd asked me where I was staying, and I'd told him near Morvich. He realised that was in the opposite direction to the Cluanie Inn, but I said the lift was still no problem. I'd been done such a favour that morning, so the least I could do was the same thing for someone else.

And so I dropped him off at the Cluanie, he drove back to pick up his friends, and I went into the Inn for veg haggis and neeps with whisky sauce

Nice to hear about the camaraderie, each helping the other out - bet the haggis and whisky were good that night - cheers

Really enjoyable walk this. My better half volunteered her services at the other end to help us get back to the Inn. Great phots I wanna go back!

Jabber wrote:Really enjoyable walk this. My better half volunteered her services at the other end to help us get back to the Inn. Great phots I wanna go back!

I was the same, got dropped off and picked up by my other half. It's a much more relaxing walk knowing a car awaits you at the finish. I also met an American who we dropped off at the Kintail bunkhouse, doing our good deed for the day

It's a cracking walk

Rockhopper, the haggis certainly was good when I turned up soaking at the Cluanie. It made up for the fact I was with the car so couldn't have my usual couple of drams on my last night in Scotland.

Jabber, you should come back and do some of the other hills around here.

Johnny, nice one helping out the American.

LS, there are lots of cracking walks around here as I'm sure you'll know.

rockhopper wrote:Well done simon - good report and at least you got some views despite the cloud

Nice to hear about the camaraderie, each helping the other out - bet the haggis and whisky were good that night - cheers

Cheers, Joe, I hope you get good weather for this one. I've not done the Ring of Steall yet but it sounds awesome.

As for crossing that burn, we just waded through it waist deep we were so desperate to get back to the car!!!!

Cheers Gammy, I read your report and so remembered to hang on to my keys when I did the 5 sisters with friends a week earlier. And as I would be driving the car waiting at the end, it was a good idea to remember to leave some footwear there that I could drive in! The two car shuttle thing can get quite complicated

Thanks a lot Polly, wading is one thing, being swept away or taken under by the current is another, I think the footbridge was essential the day we came down. And congratulations on your conquest of the mighty Liathach

great report , i did the whole glen about 10 years ago on a long weekend , i had my car but also my cycle , cycle to the start in the morning and hide the bike , finish the walk then go back for the bike , eezy peezy