A win for Beinn Dearg Mor against the mighty An Teallach!

A win for Beinn Dearg Mor against the mighty An Teallach!


Difficult choice - An Teallach...or Beinn Dearg Mor? That was the great debate between myself and Mr T, the morning after our Fisherfield expedition. 'I honestly thought you'd win', said Edinburgh Dad to Mr T. [He obviously doesn't know me!]

Not that it was an easy choice - I've been getting ready to climb An Teallach for the last 3 years, and this weekend was going to be THE ONE. But then we did the Fisherfield 6, on almost no sleep the night before. And I had seen Beinn Dearg Mor... what an impressive mountain! It may fall short of a munro, but only just. And have you seen its rocky butresses, its corries, its ridges? Okay An Teallach has all that and more, but you can do AT from the road - in fact that's how I've always planned it - with a willing hubbie as driver [he doesn't climb mountains - his loss!]. Also, would there be another chance to come back for Beinn Dearg Mor if we didn't do it now? It was beckoning us in the early morning sunlight, and off we went. Somewhere down that Lazy River....hard to believe it's ever impassable! River crossing; bog crossing - both straightforward after the dry Summer in these parts. We came across plenty of evidence of the original forest along the way.. A nice ornament for the garden?... Have you tried lifting one of them?! nice tree stump. Just a bit too heavy for the rucksack

The idea was to strike up the hillside - not to the main corrie facing us, but to the hanging corrie round the backside - Coir' an Talaimh-tholl. We had seen it from Beinn a' Chlaidheimh the day before, and it looked a fine approach. So we made a high level traverse below the crags on the Beinn's eastern flank. A nice route, between boulders and grassy terraces - some great views across to the Fisherfield 6 and of course back to An Teallach. How did that Rowan find it's way up here? A lovely spot to contemplate the joy of being alive in this amazing place!

Mr T always keen to press on [I keep manufacturing reasons to stop.] Not long before we found ourselves on the lip of the corrie and that's where the lovely gritty crags began. We followed them up, northwest onto the main ridge, deviating here and there for a bit of scrambling fun. There was a very strange feature to our left - some sort of fault line that made the mountain look as though it was sliding away. It had created a gorge that was stuffed with greenery - some sort of lost world? [Note to explore it next time]. 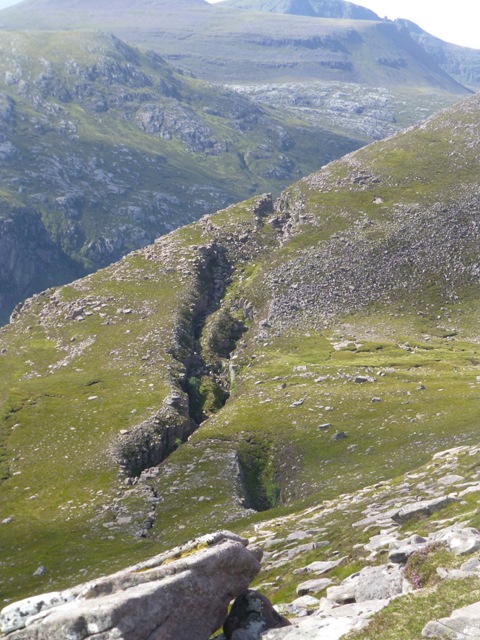 Nice rocks! - I thought I was on the Dark Peak for a minute! She'll be coming round the mountain when she comes...etc

The view was so stunning when we got to the lip of the main corrie - even Mr T had to stop to admire it! Had a really good look at An Teallach and the best bits of the ridge. You could practically walk it all in your head just looking at it! Then there is Beinn Dearg Mor itself - what a mountain! looking across the main corrie of Beinn Dearg Mor. The summit cairn just tucked over the top of the peak An Teallach - a hairy route for another day More of An Teallach's delights

The curving ridge drew us round to the top - a little grassy knoll between sheer craggy drops. Really exciting and combined with the views it was heady stuff. Of course you have to have your photo taken in the most dramatic spots - just don't look down! On top of the world! Who wouldn't be?

From here it would have been great to have gone on - Beinn Dearg Bheag next is the obvious thing. But we had to get back to walk out from Shenavall and then travel south, so regretfully we had to go down. From the far side of the corrie we had spotted 'a small path' threading itself along the side of the northern ridge, and dropping into Coire nan Clach. That would do for us! Following a couple of stags we skirted round the summit crags on the grass, scree and boulders above Coire Toll an Lochain until we could rejoin the ridge lower down. 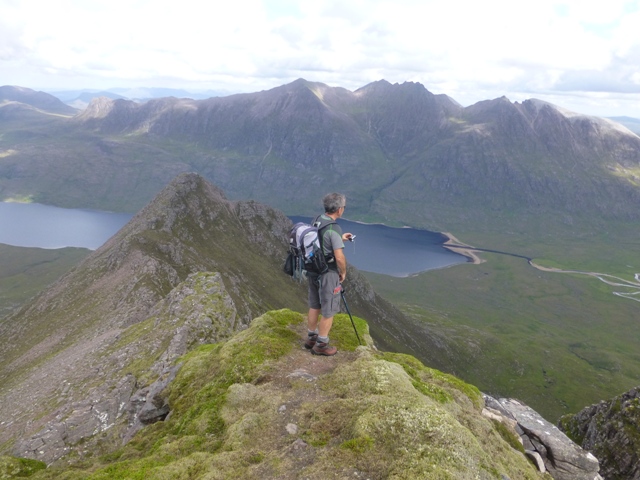 looking back up the ridge to the crags and gullies below the summit. Our path went off to the left

A bracing little section of ridge walking until we hit a small notch where our 'path' shot off - pretty much into thin air! Mr T claims it was made by deer [funny images in my head of 4-legged work parties when no humans were looking], but I reckon it was done by someone like us. Anyway, whoever did it, they obviously got bored, because we lost it pretty quickly even though we had both seen a definite line here on our way up. Heading straight down is always another option, and that's the one we took. It was steep but quick! Just a mixture of tussocky grass [botanists excuse that inaccurate description!] scree and a few small rocky outcrops. Impressive rocky towers crags and gullies rising around us as we dropped down to the floor of the corrie and met a tumbling burn. Then, lower down there was a beautiful 'Japanese' rock garden. You feel so lucky to stumble across these wonderful creations of nature - who needs a garden designer? Why can't they eat some more midges?

Not far to the first river crossing. Someone has left lots of bits of wood lying about - it looks as though a kind of board walk on the track has collapsed This bit of wood will make a good bridge - who needs to get wet feet?

. I'm fed up of getting wet feet, and being trained in the art of construction I reckon I could make a good bridge from these timbers. Mr T has already crossed and is secretly smirking as I place a plank carefully in the river. The mountain air has obviously made me light-headed and pretty dim. The plank lands far short of the nearest stepping stone. It bobs away downstream and I wade across. Say nothing!
Back at Shenavall Bothy, we load up our packs and head back to the car at Corrie Hallie, nodding respectfully to An Teallach as we pass. Really glad that we chose to climb Beinn Dearg Mor today - it was a cracker. But An Teallach remains at number one on the Most Wanted list! An Teallach - still there for another day! Spot the location competition? The best bit of the expedition - remembering the best bits and planning the next one! That was fantastic and it looks like a wonderful day

A win for everyone with this report! Very nice!

Thats a fine TR for a fine mountain,hope you dont mind if I add my own pic to your TR. Great report. Like Gammy spent along time looking at it from the bothy

And excellent pictures too

I know you'll enjoy that one when you do it. I got some great views of BDM when I was on AT