). To ease John back into it I planned a nice 6 fell walk of 10 miles which sounds quite sadistic but compared to most fells these are comparatively rounded and shouldn't have caused too many problems.

The morning was quite poor and travelling through the district centre was slow going due to the light rain and rolling fog around Ambleside and especially over Dunmail Raise. Keswick was a little clearer and by the time we reached the little car park layby by Overwater we could see the top of Longlands Fell but the clouds were still over the other surrounding fell summits.

We set off along the roads for the few houses at Longlands and through the gate onto Uldale Common. We decided on the right hand path and a considerably sharper ascent up Longlands Fell rather than following the wall to the left and up the ridge at the far side of the low common. The path wasn't very clear after the first few hundred feet of ascent so we took our bearings on the fell top and clambered up through the long grass to the top. 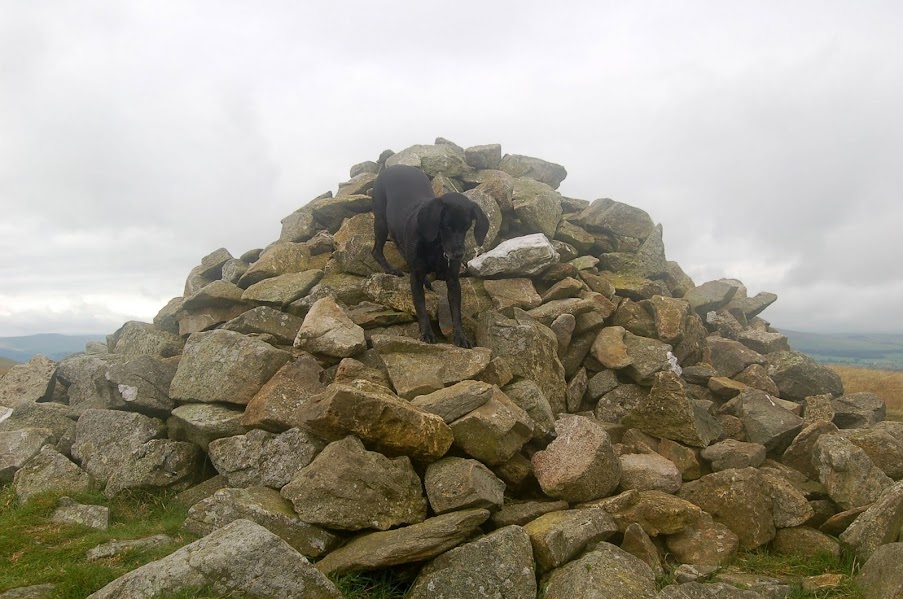 Here we joined the main path heading down the other side of Longlands and round to the left of Lowthwaite Fell through boggy land to the head of Charleton Gill before hooking left heading for Brae Fells summit. 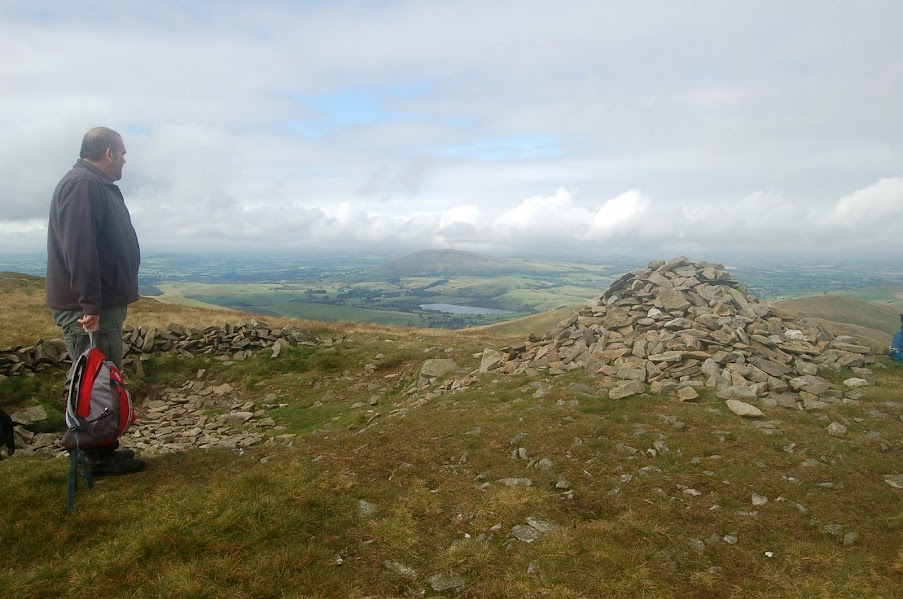 The cloud had lifted on our ascent and afforded us decent views but not the glorious sunshine that had been predicted. From Brae Fell we traversed the ridge SE and the little hops up onto Little & Great Sca Fells and after a cold coffee break (John's flask had failed him

) we pushed on over more bogland upto our highest point for the day on Knott.
Several other people were here today which was quite a surprise for what uptil then was a very quiet solitary walk. The views to the back of Skiddaw dominate the southern horizon yet better were to come from our last fell of the day. 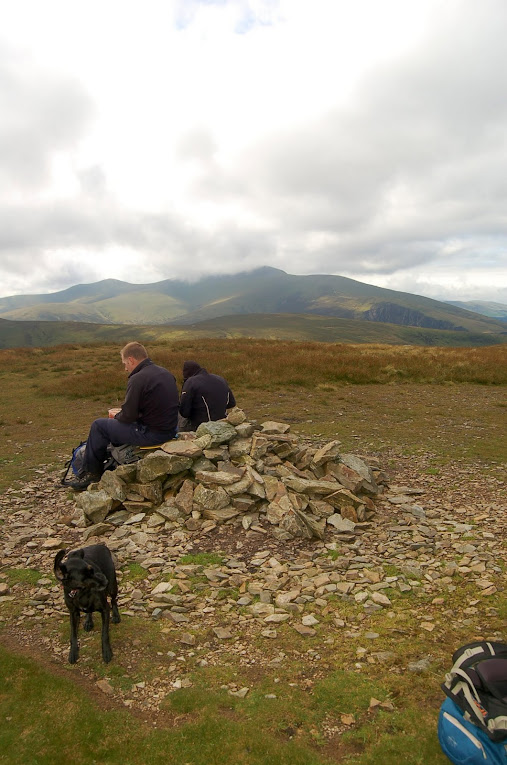 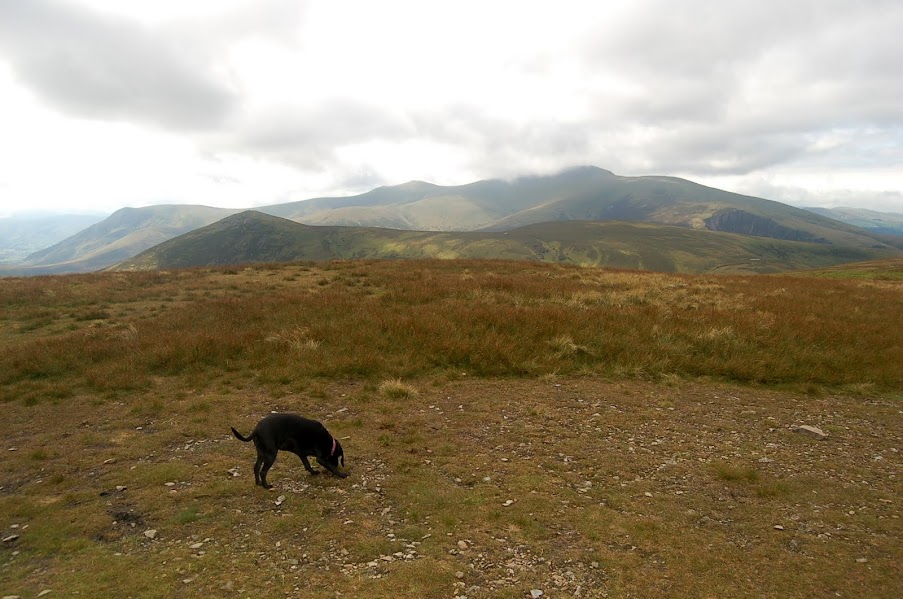 We dropped back down the way we had come to Great Sca Fells summit before taking the path west down the steep grass bank to Meal Fell. John's backpack split open on this descent (dodgy zip

) and so a further 5 minutes was spent picking up the strewn water bottles and lunch boxes before pressing on to Meal Fells summit. 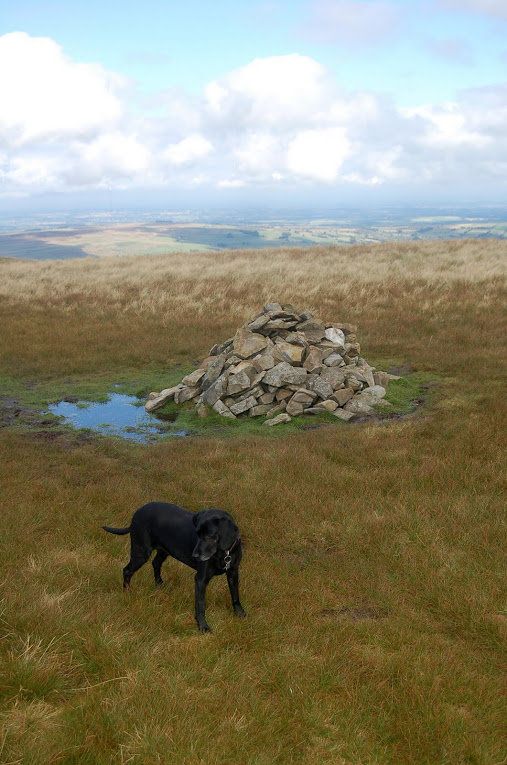 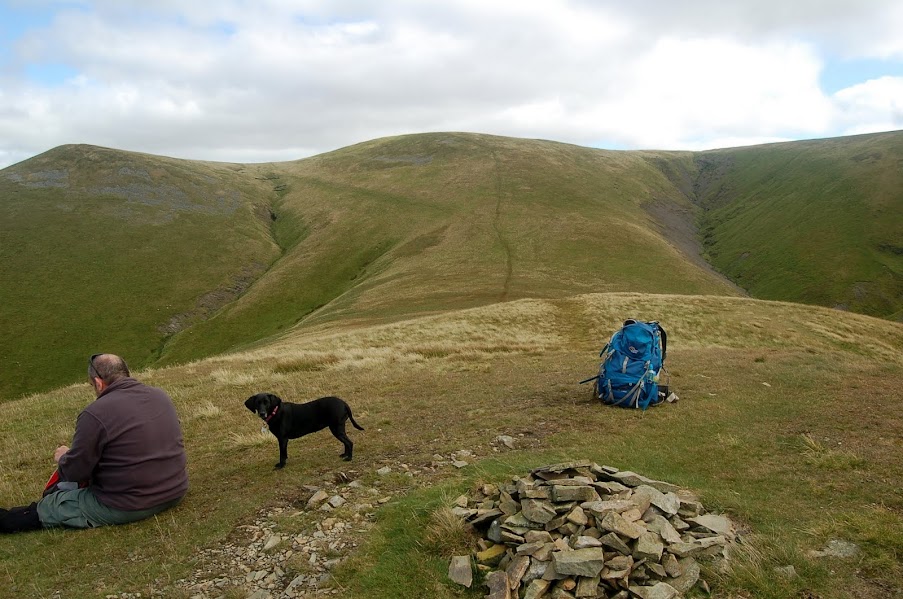 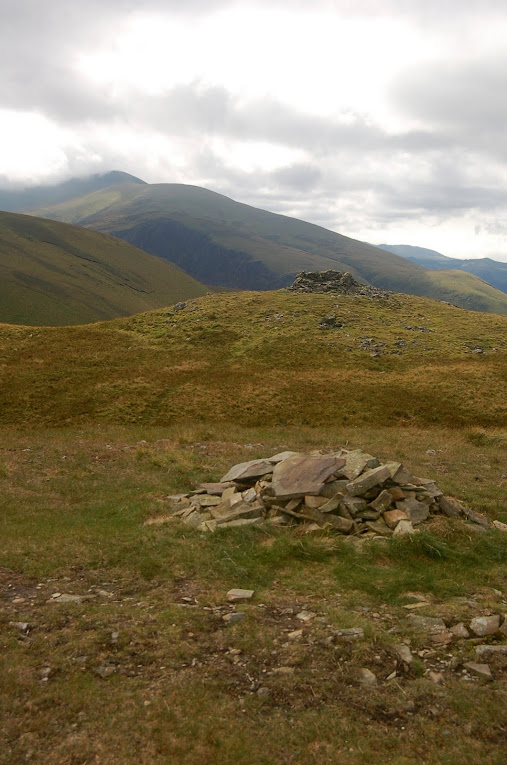 . The photos also started to improve with large stretches of blue sky slowly showing themselves.

Our final summit of Great Cockup lay over the other side of a large crevasse named Trusmadoor which sounds severe but was in fact just a steepish grassy descent down to Burntod Gill and a short but steep plod up the other side. 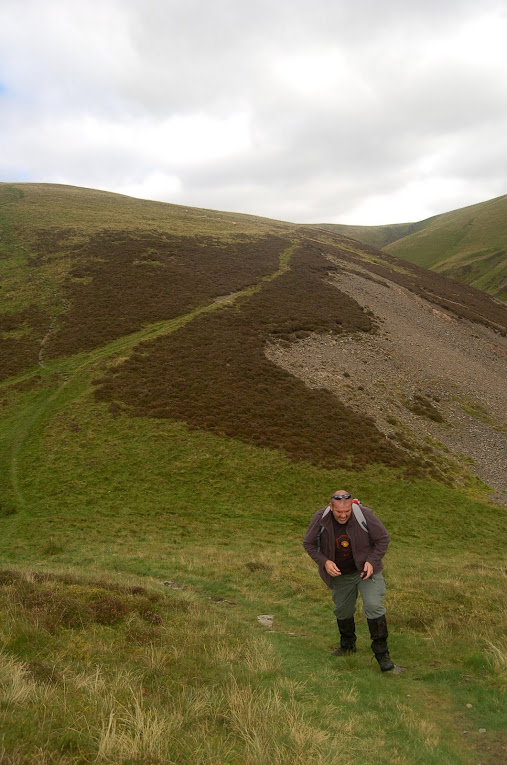 Dropping down into Trusmadoor between Meal Fell and Great Cockup 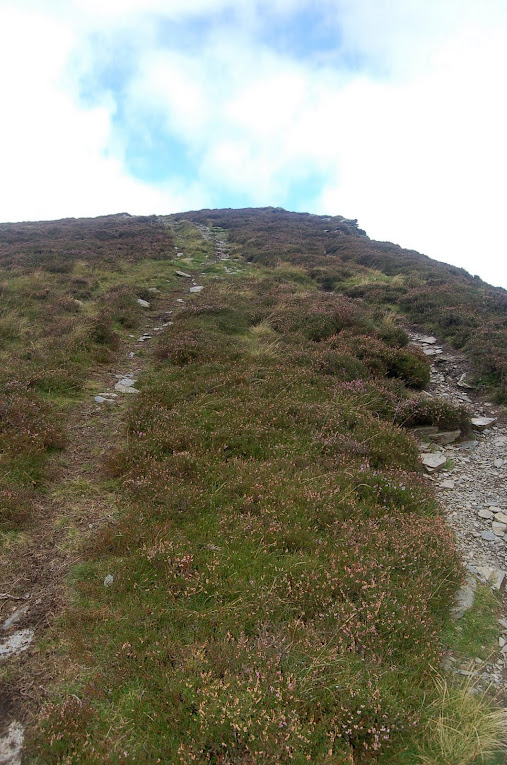 The views from Great Cockup are great over Dead Crags & Bakestall and upto Skiddaws summit. The entirety of Uldale can be seen from here as well as views out to Bassenthwaite and Binsey. 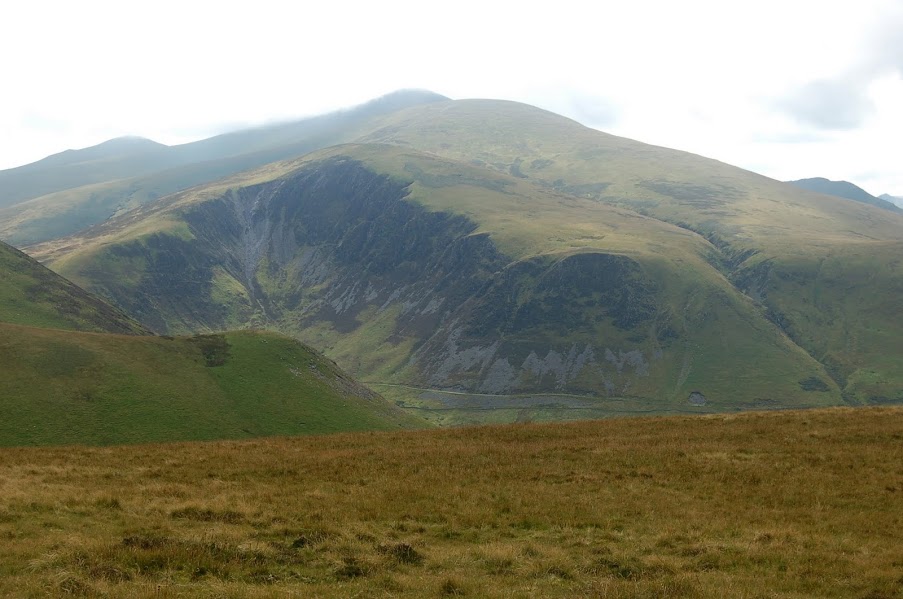 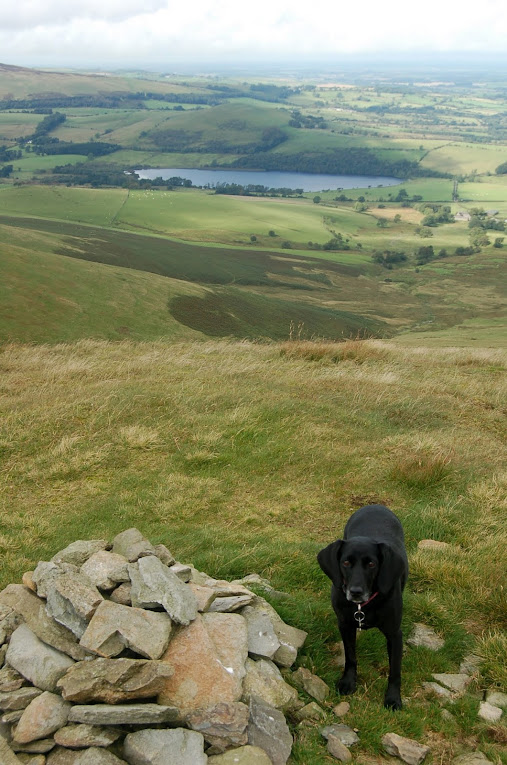 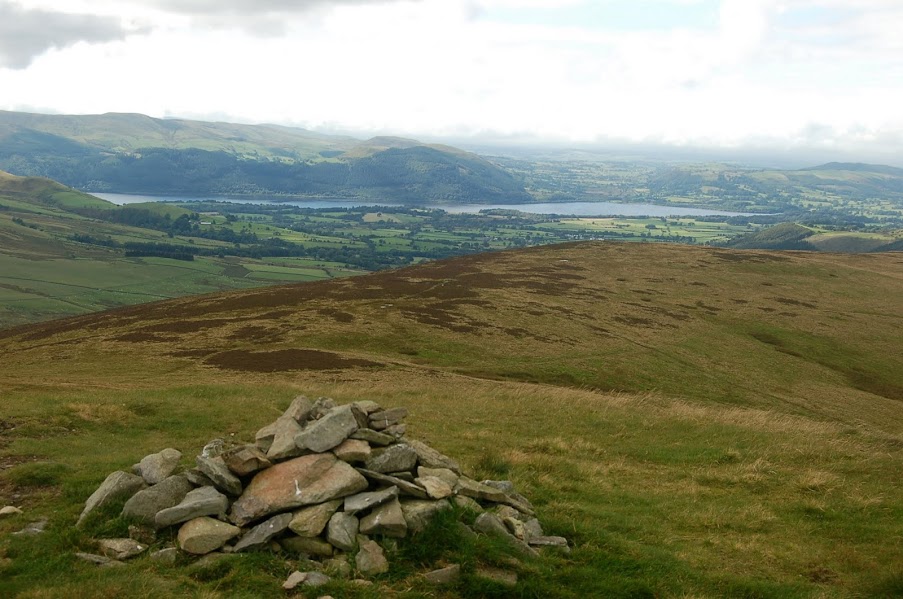 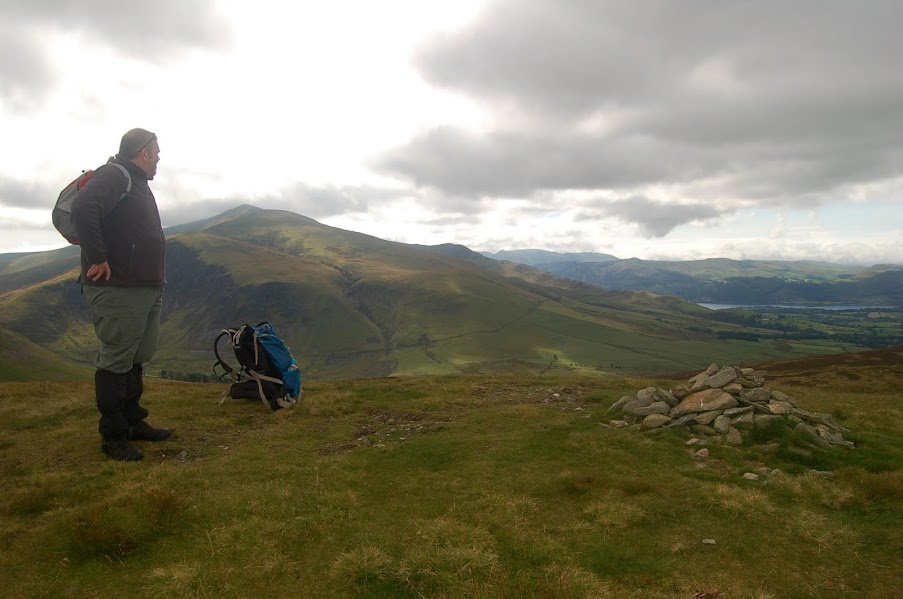 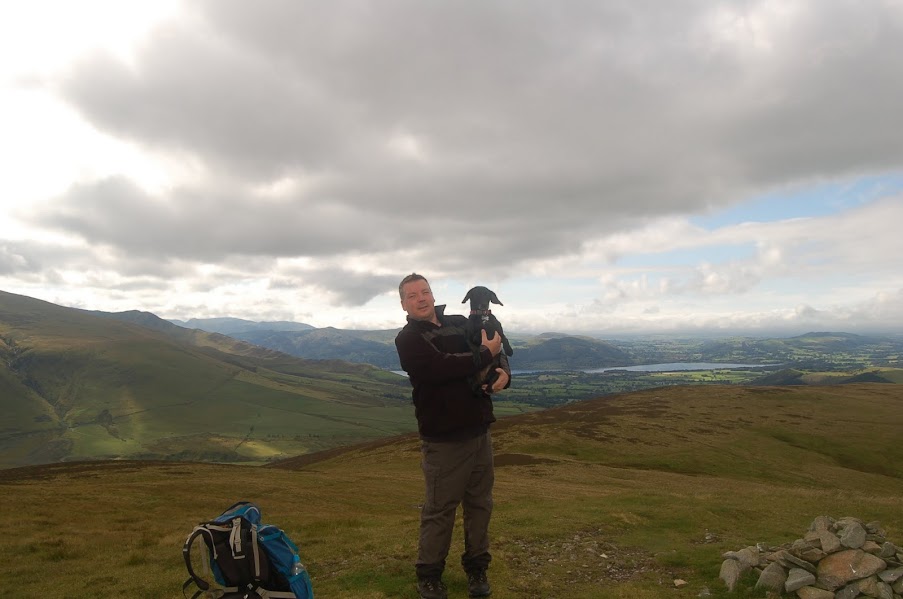 Damson & I claim another 6 Wainwrights leaving 48 to go

The entire round had a feel more like the Yorkshire Moors than most other Cumbrian Fells but made a pleasant change and felt a comparatively easy 6 fells bagged. My Skiddaw round and this have made a significant dent in the Northern Fells with Blencathra to follow preferably before the year end.

Next week will see a return to the Central Fells for Eagle and Sergeants Crags if the weather permits.

Well done you and Damson with only 48 to go, Craig

I'll buy you both a drink when you've finished them

A great walk and wonderful views

Phooooey wrote:The entire round had a feel more like the Yorkshire Moors than most other Cumbrian Fells

Great report. I really fancy the Back O'Siddaw fells but I'm not sure what my daughter Grace will make of them. They look like what she calls "Branstrees" after the less than inspiring Far Eastern lump. I suspect bribery my have to enter the equation

The Howgills are a pretty good comparison, Susie. Somewhat more compact than most of Yorkshire but similar conditions underfoot and similar ascents and descents.

I was of a similar mind before this last weekend, mainly heading for that area as they weren't as high as other Wainwrights left on the list and we could bag a few at a time.
The reality however is that this was a very enjoyable few hours in fairly decent conditions (think it would be fairly grim if the sun wasn't shining) and the views to Scotland and Skiddaw are great.

My memories of Branstree were OK though ! The climb up from the car park was good to begin with until you reached the col and the descent back down had stunning views back over the lake but I agree that the summits themselves were lacking a bit of interest and also the views up there were restricted and a little bland compared to some.

Great stuff as always Phooooey, the cold coffee made be pull that 'eeugh' face as if I'd had a drink of it myself

Most will be done again possibly from different directions or in different combinations whilst supporting John completing his. He's finally joined the fold as Coley and I believe he's completed about 45 - 50 with me so far.
I'm afraid he may be doing some alone as there are a couple of fells I don't particularly fancy visiting again. The Nab is a fine example of this as I got bitten to death traversing the swamp up to its summit on an extremely hot day, and Green Crag was another as I spent 6 hours with my feet in water unable to put my rucksack down.
The Munroes are a possibility but require more time than I'm able to commit at the moment (in travel alone).
It'll take me a while to finish the 45 yet, if the weather stays like it is today