A glorious day in Snowdonia on Saturday. Things kicked off with a cloud inversion and just got better from then on in. Did Tryfan’s north ridge, the cannon, Adam & Eve, all the usual stuff, before moving on to Bristly Ridge & the Glyders. There are two distinct gullies at the start of Bristly Ridge ( to the right of the wall). Apparently, ‘sinister’ means ‘left’ in Latin, and the bigger gully with all the scree coming out of it (and the one I’ve always used in the past mistakenly believing it to be sinister gully) is actually Main Gully. Some people call it Dexter Gully, as ‘dexter’ is Latin for ‘right’. Anyway, Dexter (or Main) Gully is slightly more difficult because of an awkward exit at the top. The first pitches of both gullies are wet and, if you start off in Main Gully and don’t fancy the second pitch, there is a path traversing across to Sinister Gully. Also it is possible (and easier) to climb up the rock on the right of Sinister Gulley and so avoiding the wet first pitch.
And that’s about it really as I’m going to let the pictures do the talking. Loads of thanks to Pete, Jenny, and Chloe (hope I remember the names properly) from Devon who were responsible for the cannon, Adam & Eve, and cantilever photos. A magic day all round, but no goats. Where did all the goats go to on Tryfan?? A sea of cloud over the Menai Straits Leap of faith from Adam to Eve Looking back to Tryfan from Bristly Ridge The Cantilever on Glyder Fach This levitation lark’s dead easy once you get the hang of it! 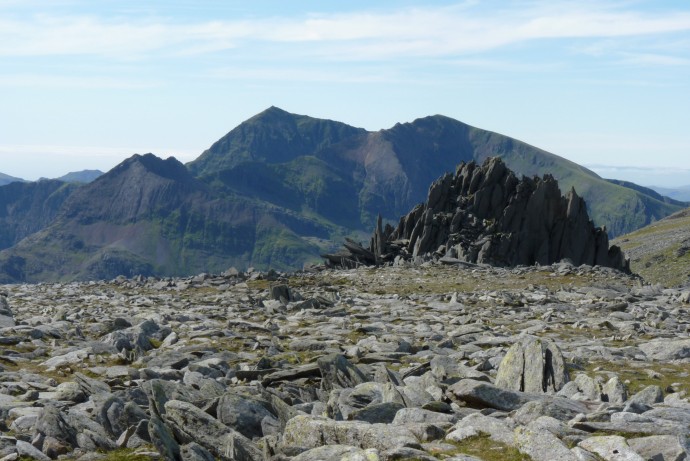 Castle of the Winds with a Snowdon backdrop View to Anglesey down Nant Peris All the way to the sea Stunning inversion to start and spectacular views all the way in perfect weather ....it must have been terrible for you

Beautiful photos throughout and most impressive gymnastics on those rocks

So it was a cloud inversion! I did the same route as you that day but I set off much later, after all the mist had gone. I wish I'd gone earlier now because I would have seen that inversion from above instead of being underneath it

I love the photo of it.
On the other hand, the goats had come out to play by the time I got there Think I'd have preferred to see the cloud inversion though

Thanks guys. Actually, I'm not really sure what a cloud inversion is. It just looked like clag to me until I got up above it. So the goats were there after all! It was pretty busy when I went up Tryfan (lots of traffic) and so I guess they were hiding.
By the way, Chris, I still have a long way to go before I can produce pics like yours. In fact, it's been so long since I posted I made a mess of the pics. I added one at the end and deleted this one by mistake:- houdi wrote:By the way, Chris, I still have a long way to go before I can produce pics like yours. In fact, it's been so long since I posted I made a mess of the pics. I added one at the end and deleted this one by mistake:-