Chalk and Cheese on the Cairngorm plateau

Chalk and Cheese on the Cairngorm plateau


After my adventures on the northwest a couple of weekends previous I was keen to be back out on the hills, having had work pressures last weekend which I thought ought to come first

My friend from work, Stuart, suitably recovered from the descent route I took off Beinn aBhlair a few weeks back

was my companion for the day. The hills of choice were Mullach Clach a’Bhlair and Sgor Gaoith – approached from Achlean and Glen Feshie. Stuart is quickly learning that while I might take the path up the hill, often as not I don’t take the path down

And today I didn't disappoint

We couldn’t have had a better day for this walk. Then sun was shining. The cloud (what there was of it at the start) was broken and high. Even when it did thicken later in the day it never dropped down or took away from the views. Starting the walk into Glen Feshie 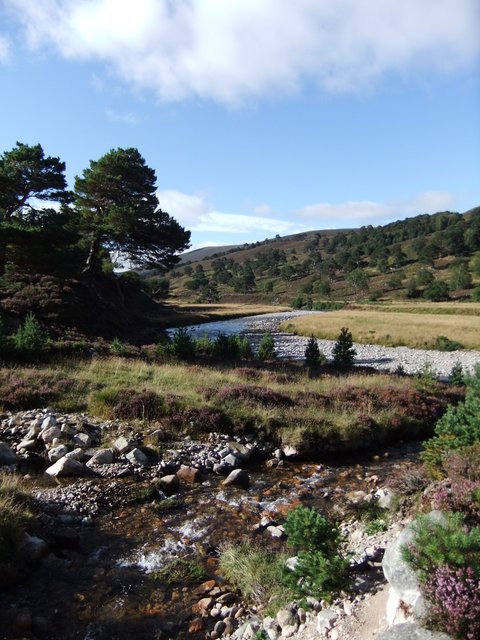 I had expected this part of the walk to take longer than it did, but soon enough we were at the crossroads in the tracks and heading on our way up the landrover track which would take us to within a whisker of the summit.

I appreciate some people are offended by landrover tracks despoiling the landscape and taking away the sense of wilderness. I can understand that point of view and certainly don’t want to start a debate on this post bout the “whys” and “wherefores” of these tracks. I would say I thought the initial track up the side of Coire Caol seemed ok to me. I’m fairly ambivalent to these tracks, but even I thought the track at that heads left at the junction on the plateau itself was monstrous

Whether the initial track was an intrusion or not it was certainly one thing..............relentless The long and winding road up to Mullach Clach a'Bhlair

It was a pretty hard slog up the track. We kept hoping there would be some sort of levelling just to give us a breather, but it just went on and on and on and on.....

Eventually though there was the joy that was Coire Garbhlach. A good chance to stop and enjoy the view 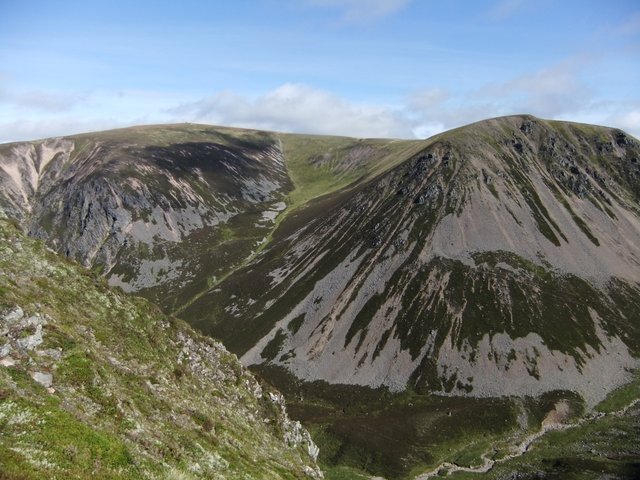 After that some more “relentless” and we were on the plateau.

Thankfully there are views to Braeriach, the Angel’s Peak and Cairn Toul, as well as toward Beinn a’Ghlo and the Glenshee(ish) hills If you don't like this view, don't do this walk. This view stays with you in one form or another pretty much all the way once on the plateau 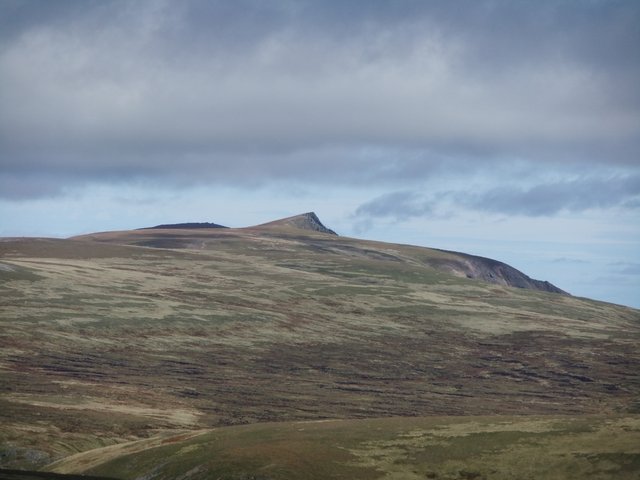 The unexpected peak of SG

The peak of SG seemed so incongruous with the featureless plateau we were on. But at the same time, so inviting. So, we were soon on our way. Met a lovely couple just as we were passing over the head of Coire Garbhlach. Stopped for a while and had a good natter with them about the hills. Pity every other person we saw on the day was a misery guts Coire Garbhlach from the top It was easy walking to SG, although we had the odd section of bog to navigate through. Then we were at the crossroads and the final, easy walk up to the summit. Looking back toward Mullach Clach a’Bhlair walking on the plateau and it’s hard to believe it’s a Munro

Barely stands out on the plateau. I’m sure more interesting hills have been demoted recently

SG though, is a different proposition. Not a tough walk to the top, but at least you feel like you are on a hill. Anyone who has stood on the summit of SG on a clear day will know what we saw. Anyone who has only had clag, well..............I’m sorry

My point and click camera just does not do it justice 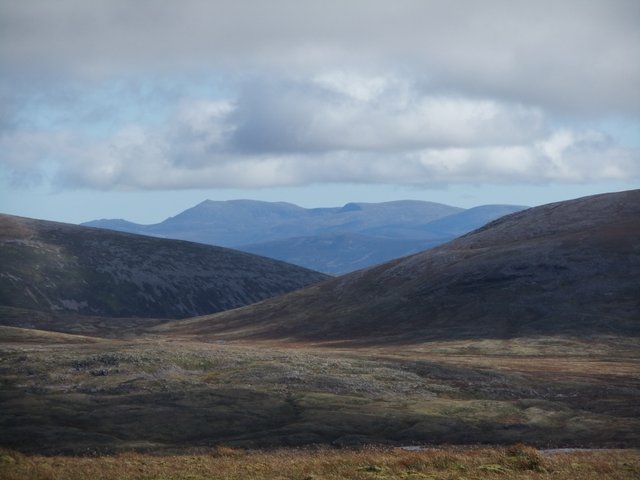 The gentle climb to SG summit 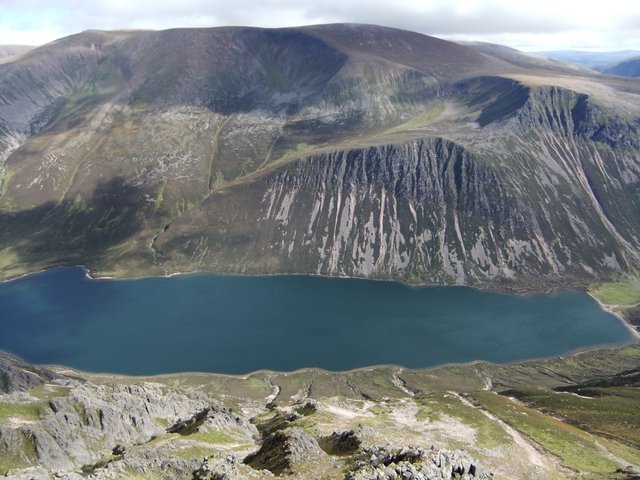 Just stunning views all round View back toward MCaB 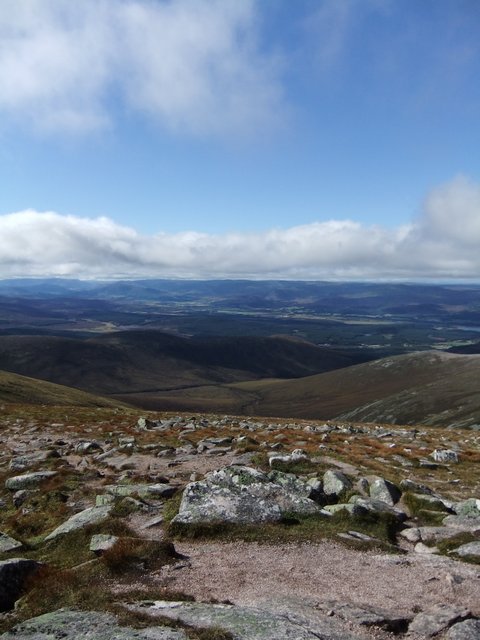 We spent a short while here before heading off. And this was where Stuart had another lesson in my “how to avoid descending off by a path when you can do something more interesting instead” approach to getting down off a hill

Stuart ill advisedly asked what we should do next. I suggested a brief hop over to the nearby top (Sgoran Dubh Mor) and then descend down the Meall Buidhe ridge where we would eventually pick up a path lower down. All fine so far, as we head to Sgoran Dubh Mor, with nice views of the Cairn Gorm and Loch Mhic Ghille-choil 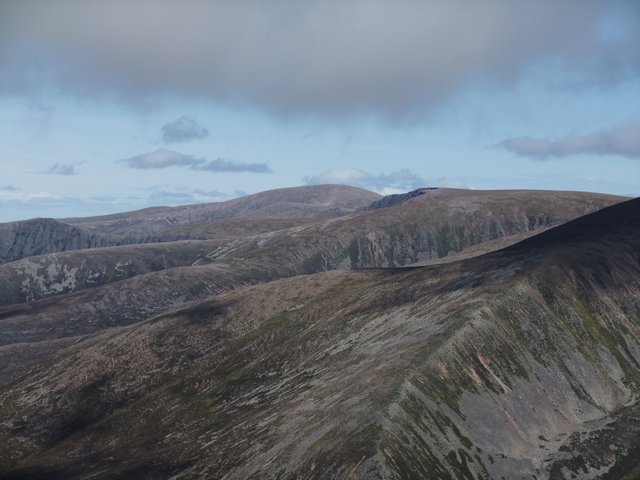 SG from the other side Rather than stay high (in hindsight we probably should have) we dropped down beside the Allt a’Chrom-alltain. I was happy with the choice. Not a fern in sight

It was pathless heather. A bit steep at the start, but it soon eased off a bit lower down. Stuart wasn’t keen though

It wasn’t doing his knees any good 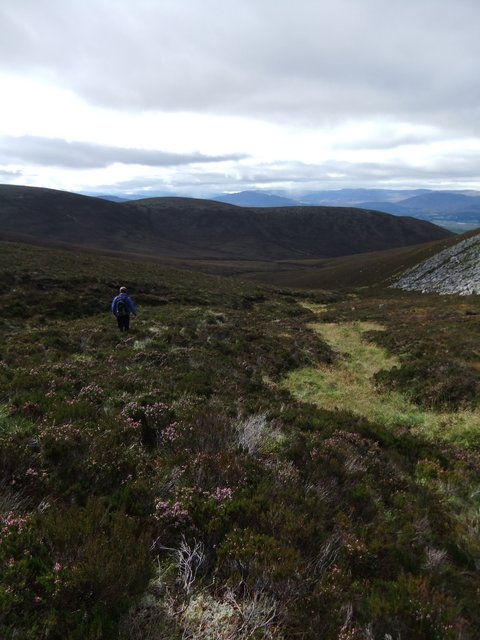 We soon hit the path as promised

A bit boggy though at the start

This improved over time, which was good

Eventually our boggy path joined a well maintained low level path back into the forest, depositing us eventually on the roadside. Then it was a hop and a skip (all 2 miles of it) back to the car

Ooopps, hadn’t realised we would be that far from the parking area Still, we got there eventually

Then a quick trip back into Aviemore to finish the day off with a fish supper and, in my case, a can of vintage Red Cola

Then, when I get home, I see SMC have got me one extra hill closer to compleation. Three for the price of two – yer canny whack it

nice one pete. I like that view, beats looking at houses or a desk any day!
still have these ones to do and I think they need a nice clear day, don't fancy the big plateau in the clag

So the moral of the story is follow your ascent but when it comes to the descent, completely ignore your route?

Gorgeous day for it. I enjoyed these two and the wide expanse of the Moine Mhor is kind of special too.

mrssanta wrote:nice one pete. I like that view, beats looking at houses or a desk any day!
still have these ones to do and I think they need a nice clear day, don't fancy the big plateau in the clag

Thanks mrssanta. Definitely a walk for a clear day. As much as it's an easy walk on a clear day, the opportunity to get it seriously wrong in clag wouldn't appeal to me

Fudgie wrote:So the moral of the story is follow your ascent but when it comes to the descent, completely ignore your route?

Something like that Fudgie. I always have the route planned, but sometimes you see an "interesting" alternative and you just can't resist

dogplodder wrote:Gorgeous day for it. I enjoyed these two and the wide expanse of the Moine Mhor is kind of special too.

Couldn't have asked for a better day dogplodder

A very beautiful, barren place. Not sure I would have been anywhere near it in clag though

Another great report Pete and some beautiful shots from your 'point n press' camera....I'm going to trade mine in and get one of those

Have you got a thing about inventing descent routes of late

you can't seem to stick to a trail anymore

I do like a bit of cheese! Cracking looking day - really like the shot of Big Braeriach across the loch.

Users browsing this forum: Bootsnbooks, The MacMontes, The snail and 55 guests