Beinn Fhada and A' Ghlas-bheinn

Beinn Fhada and A' Ghlas-bheinn

After a fine day on Sunday 26 August and the 5 Sisters, the Monday saw the weather deteriorate and I stayed at low level, walking from my b and b at Innis a' Chro near Morvich to Glenlicht House and back. On the Tuesday the weather didn't promise too much either, but I wasn't going to miss out on the hills again. The routes to Bheinn Fhada and A' Ghlas-bheinn were right on the doorstep, so that's where I headed.


bfh_agbh.gpx Open full screen  NB: Walkhighlands is not responsible for the accuracy of gpx files in users posts

So I set off in drizzly conditions looking back at Gleann Lichd. It looked like it could be a long, grey mountain walk in more ways than one. 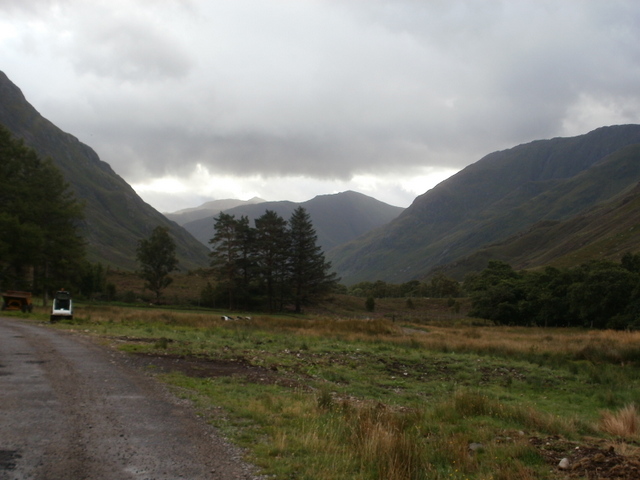 The north-west ridge coming down from Bheinn Fhada (Meall an Fhuarain Mhoir and Sgurr a' Choire Ghairbh) looked impressive. 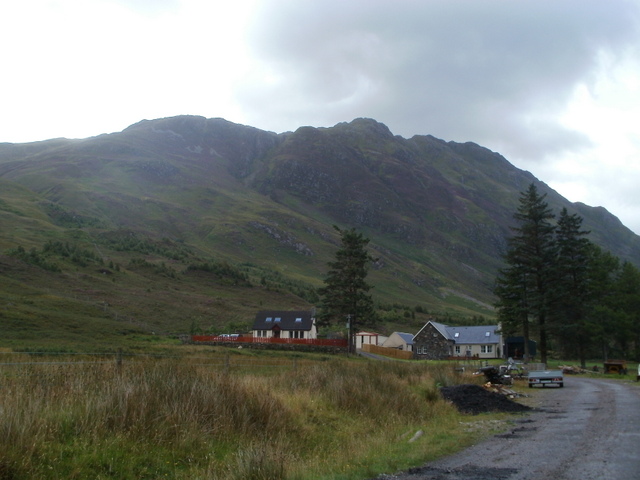 I turned right along the track which took me into Gleann Choinneahain. Continuing further up the glen, Meall a' Bhealaich came into view. 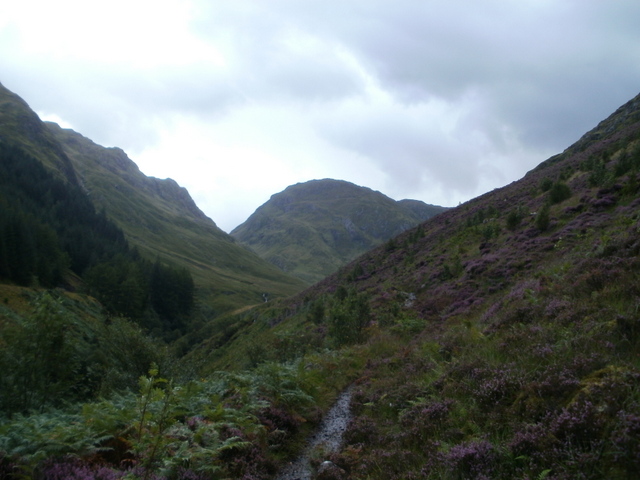 Around this time the rain became heavier. The burns were filling up, and the Allt a' Choire Chaoil was tricky if manageable to cross. Further along the path came a junction, and the turn right towards the long mountain. I took this turn, with the ridge I'd seen at the start of the walk now viewed from the other side. 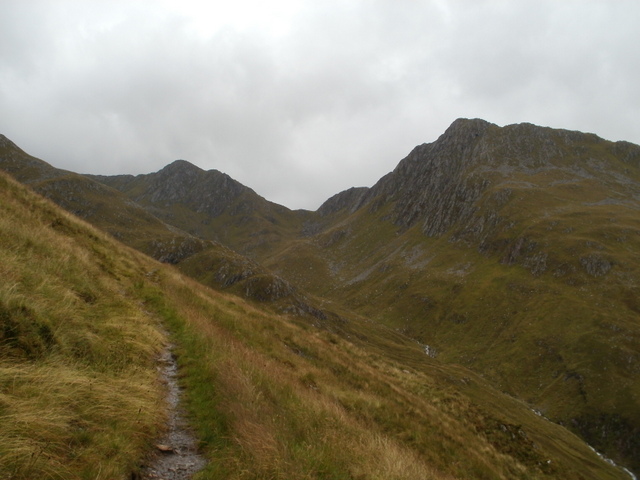 The well graded path lead uphill, with Coire an Sgairne seen ahead. Eventually the track lead up the side of the corrie and onto the ridge, which, heading south-east, widened into the plateau leading to the top of Beinn Fhada. Although the rain carried on and the wind was strong up here, there were still views. When I reached the trig column, I was still below the clouds. But the wind began to blow a gale and there was driving hail. So I quickly headed back downhill, slightly to the right of the way I'd come along the plateau, having found a faint path. Soon I rejoined the path by which I'd climbed out of the corrie, and was heading back towards the junction of paths. The burns were now in full spate and returning across the Allt a' Choire Chaoil would not have been appealing. So despite the rough conditions I turned right at the junction of paths towards the Bealach an Sgairne. Then it was a left turn and onwards to the grey(-green) mountain. On the right was a nice view of Loch a' Bhealaich. As I approached A' Ghlas-bheinn, I encoutered another walker who'd just been there, the first person I'd met in the mountains all day. He was planning on going back the way I'd come, and didn't seem too concerned about the raging burn. It sounded like he'd crossed it a few times before. He carried on down, and I headed for the top. Shortly before the summit was a nice view left to Loch Duich. Then it was on to the day's second Munro. 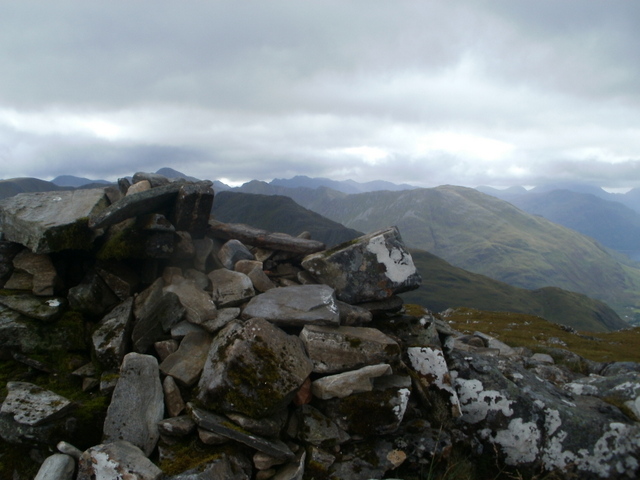 After the summit was a path which seemed like a natural continuation of the route. But checking my bearings, this was heading west. In Monty's report on these two mountains, he warns of the perils of descending A' Ghlas-bheinn in this direction. So I headed north, as per the WH route towards the Falls of Glomach. This was a pathless section, but a small group of lochans made a good landmark. 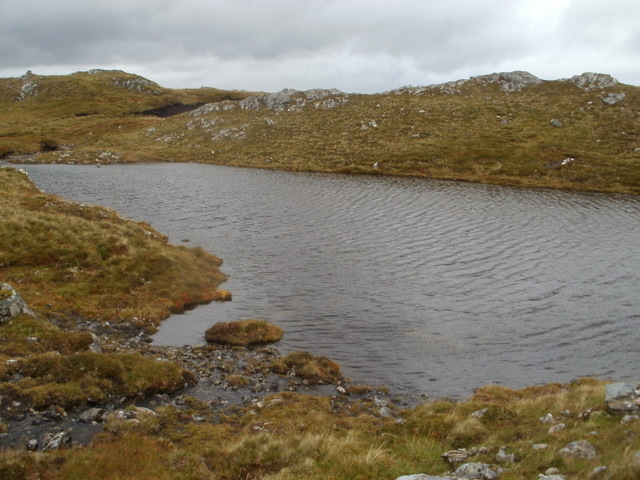 In better conditions I might have added a visit to the falls, which would have meant turning right along the path at Bealach na Sroine. But in this weather I'd had enough. So I turned left when I reached the path. Shortly before reaching Dorusduain Wood I met another walker who was on his way to the falls. I imagine they would have been spectacular in spate. But I left him to it and headed back to Innis a' Chro.

A fine walk this, even though i did it in clag. I did what Monty said not to do and descended west to quickly arriving at steep scree. Had to go back up slightly to get down further over, eventually reaching the edge of the forest to return, taking 10hrs for the walk . Kim was with me that day and she still walks with me so maybe it wasn't that bad

Johnny Corbett wrote:A fine walk this, even though i did it in clag. I did what Monty said not to do and descended west to quickly arriving at steep scree. Had to go back up slightly to get down further over, eventually reaching the edge of the forest to return, taking 10hrs for the walk . Kim was with me that day and she still walks with me so maybe it wasn't that bad

Thanks, Johnny. Yes, it is a good walk, whatever the weather. I could see how easy it would be to be tempted into trying a quick descent to the west.

I descended pretty much west along A' Mhuc without any problems but it was a glorious day. Glomach is worth a trip in it's own right and can be done with the Graham Carnan Cruithneachd

LeithySuburbs wrote:I descended pretty much west along A' Mhuc without any problems but it was a glorious day. Glomach is worth a trip in it's own right and can be done with the Graham Carnan Cruithneachd

Thanks, LS, that should be useful for any one thinking of doing AG-bh. That Glomach walk you suggest sounds like a good one.

Thanks, Joe, you should enjoy it. The area has looked pretty spectacular lately, looking at Black Panther's A' Ghlas-Bheinn post.

Now this did remind me of my youth and a long long time ago stay at the Ratagan YH.. No Munros in those days but I can remember my old school master marching us all the way to the falls.

Thanks for the memory Simon