so i've finally gotten round to submitting our report regarding out trip up Sgurr Alasdair and the great stone chute.
after Sundays climb up Blaven in the rain we were hoping for a better day and it was looking promising from where we started, Glen Brittle car park, got parked up and kitted up and were on our way for 11.30 .
Our first view of Sgurr Alasdair was not looking to great with a covering of cloud on the top. 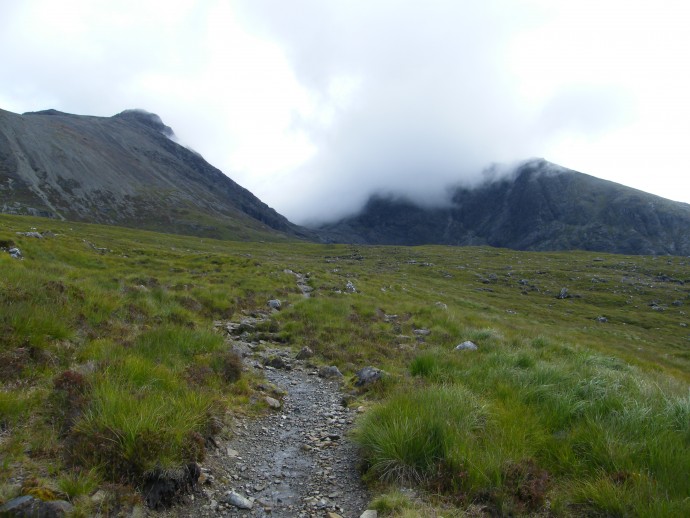 the first hour walking was easy enough with a good path to follow with a slight climb up to the gully, looking back we had great views of canna and Rhum with loch Brittle in the foreground. It was in the gully that Mrs H got her first sight of the great stone chute and her reaction was, if i remember rightly was, "we're going up there!" . after informing her that, yes we were going up there we headed of to start the ascent with Mrs H a little "apprehensive!" we're going up there!

Once we had started up it became obvious that instead of going up the "path" it was easier to go slightly to the right and climb up the larger rocks which gave for an easier ascent. After about half an hour we reached the narrowing between the cliffs, but what we didn't know was that the scree continued after the narrowing and became steeper and looser which caused Mrs H to become even more "apprehensive"

. we stuck to the right hand cliff to give us a hand hold in places. we eventually, after much scrambling and slipping reached the saddle an hour after leaving the narrowing though it seemed a lot longer. this was a good time we thought for a bite to eat so sat and had our lunch. while sitting eating we could here stone falling in the chute so we knew somebody was on there way up and sure enough a young lad appeared and sat for a while for a blether telling us that the last time he was up here was when he was 13! 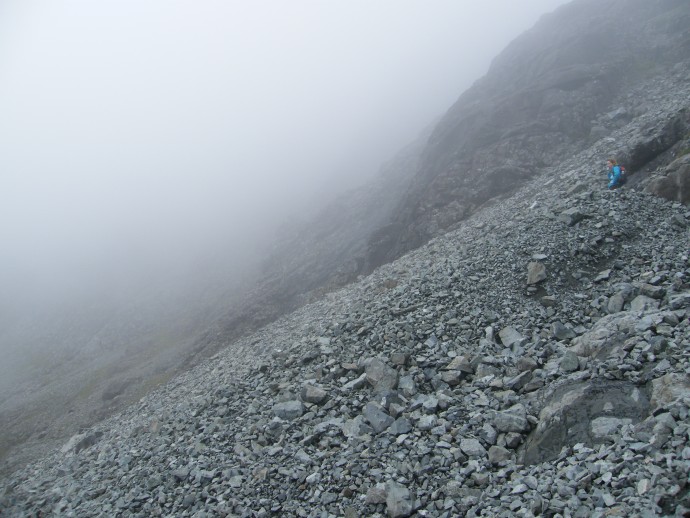 after a quick bite to eat it was a moderate scramble to the summit. , once below the cloud we had a good view of the small lochan with the blue pool. once down at the lochan we hung around for a while investigating the small blue pool inside the lochan, just at this point the cloud cover lifted, typical, i did suggest, jokingly, to Mrs H that we go back up but the look i got suggested this was not going to happen on the way down MrsH found a butterfly which we have been unable to identify, maybe somebody out there can identify it for us. now all that remained was the walk back and a paddle in the beach at glen brittle, and the short drive back to Carbost. and so ends another great (apprehensive) day in the hills.

well done you! that's hard work going up the scree.

Nice write up! Am looking forward to Ali in a couple of weeks - thanks for the reassurance!

Btw - the butterfly is actually a moth! A magpie moth. Lovely wee thing.