Moine Path.gpx Open full screen  NB: Walkhighlands is not responsible for the accuracy of gpx files in users posts
We were staying at Kinloch Lodge for a weeks fishing, but there was no water in the river and we were getting fed up with no fish. The attractions of a walk were overwhelming, even if the weather wasn't that great. The lodge had marked on the large map something called 'Moine path' which started the far side of Ben Hope and curved round to end up at the Keepers Cottage on the estate. It just had to be tried.
I persuaded my husband to drop me, the 2 dogs and 2 friends at the southern end of Loch Hope. 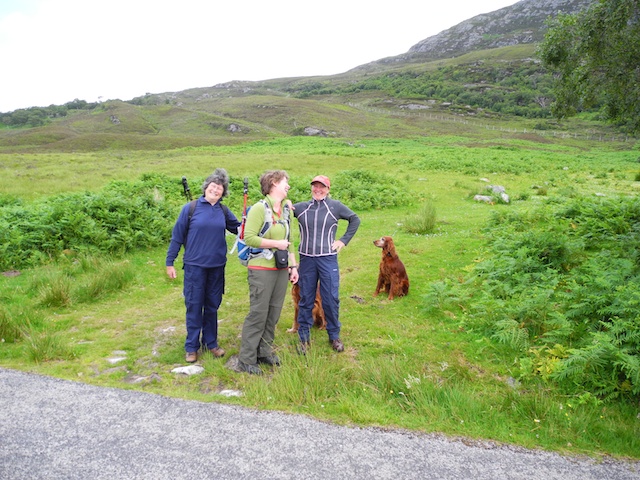 There is a track heading up the hillside curving back round the foot of Ben Hope. It is quite a gentle walk with no real steep climbs and takes you out into the bleak treeless landscape of Sutherland, with the grey scree and cliffs of the north end of Ben Hope looming over you. Then to the north the landscape rolls down, studded with myriad lochs and lochans as it heads off to the sea. Moine path cuts across this, often as a single track raised above the bog, 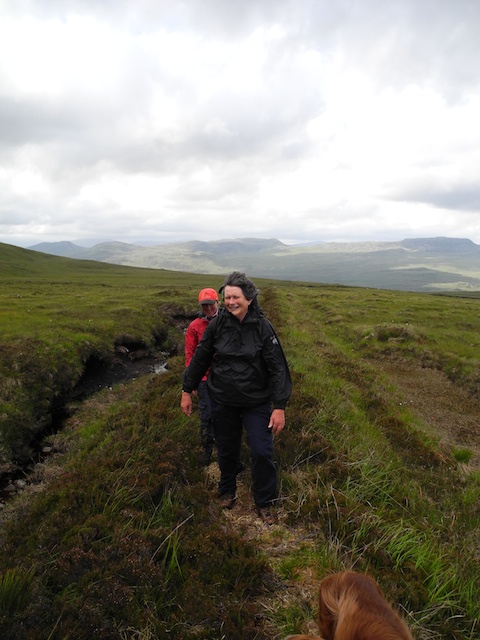 but at the beginning and end more of a land-rover track. We had a bite to eat by a wee lochan, and then headed on up to the moorland. Early on, once you have risen up out of the Glen onto the rolling expanse of peat, there are wonderful, what would be called 'clapper bridges' if seen on Dartmoor. These bring the burns pouring off Ben Hope below the Moine Path. Then the track becomes less pronounced, but can be seen heading ever east. There is a small pond out in the middle of nowhere 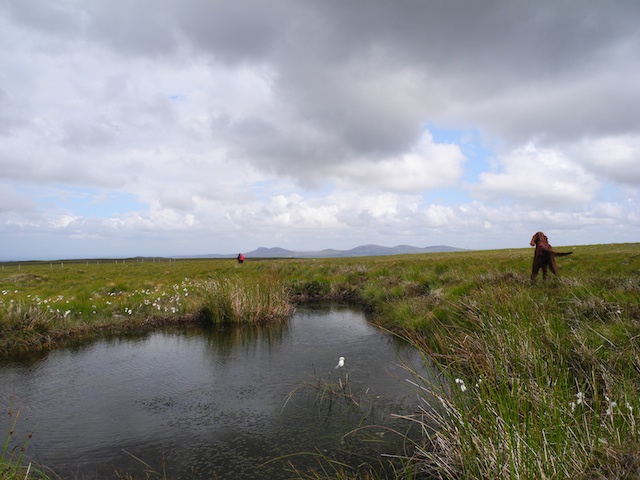 - here my dogs disturbed a duck who managed to convince them that they could catch her by flying low and slowly just in front of their noses leading, them away from her ducklings hiding in the vegetation at the edge of the pond. They were away for quite a while so she must have led them quite a dance. Then the grey lowering slopes of Hope are left behind and the bizarre truncated crags of Ben Loyal start to appear, it's lower slopes sheered off by a glacier. As you start to head down the landscape changes - more rocky, more vegetation and down into the glen crossing over the Alt ach ant strathain. Here, there is an estate track heading north out from the Strath that meets the road, but you miss the lovely Keepers cottage and a detour to the Broch. So make the effort to head up the hill to meet the landrover track and then, at the top, bear left and follow the ridge down to the Broch, much of the walls remain and the views are stunning of the Kyle of Tongue. Then head back to the landrover track up the hill through the birch woods before turning left at Keeper's Cottage to reach the road back to Tongue, or if you are lucky enough to be staying at the Lodge turn right for a cup of tea and cake.

This looks a nice walk, Ben Loyal looks a peach of a hill.