A half-day, a half-decent forecast, and just time to head for the Lakes and some of their signature peaks.

langdale pikes.gpx Open full screen  NB: Walkhighlands is not responsible for the accuracy of gpx files in users posts
The rain pelted down for all of the steep climb from Langdale to Stickle Tarn, and it says much for the quality of this path and the surrounding rock and falls scenery that it remains a pleasure still. The sudden appearance of the tarn backed by the fierce crags of Pavey Ark, even if you’ve seen a hundred shots of it before, is still startling. There were a handful of intrepids tackling Jack’s Rake, but it looks frighteningly exposed steep and narrow from this angle and – if the summit rocks are any guide – perhaps also abominably slippery. Not for me… 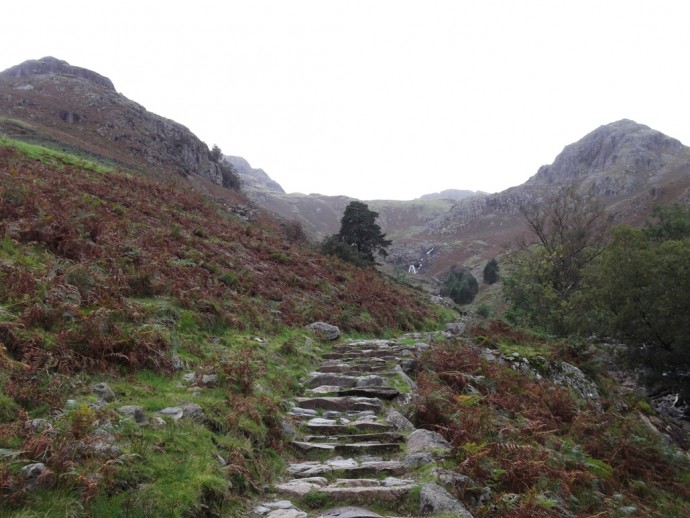 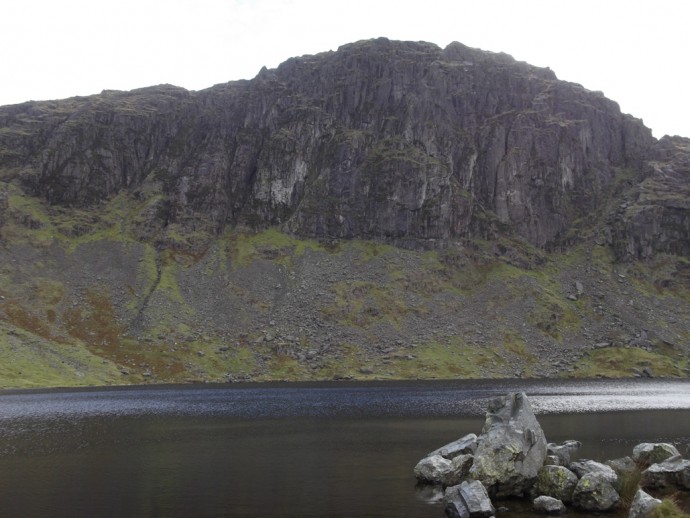 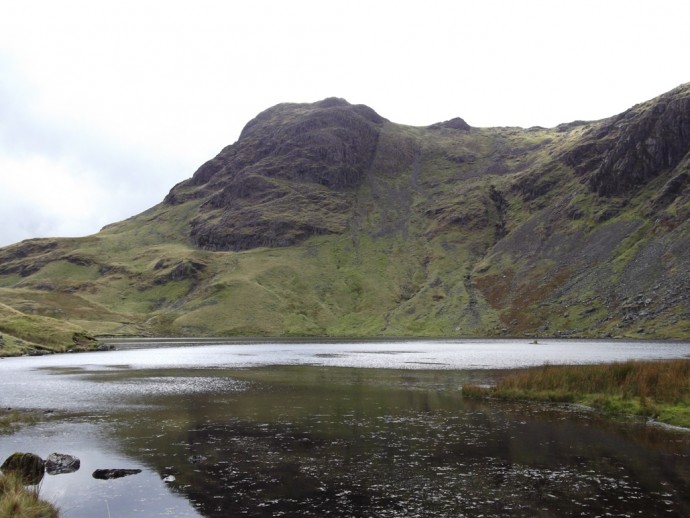 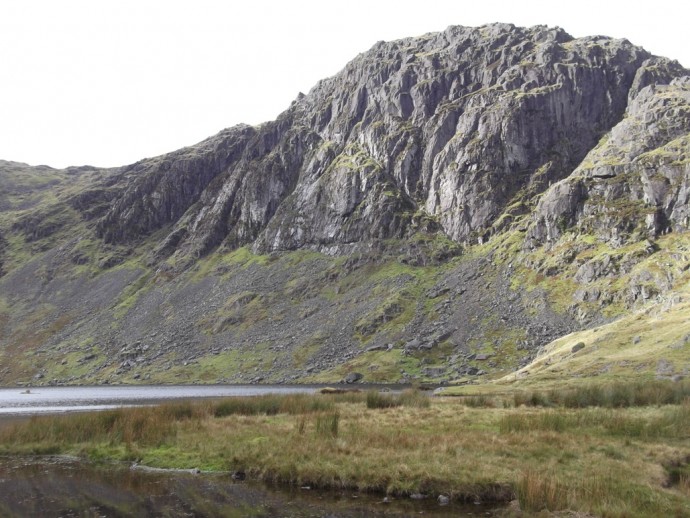 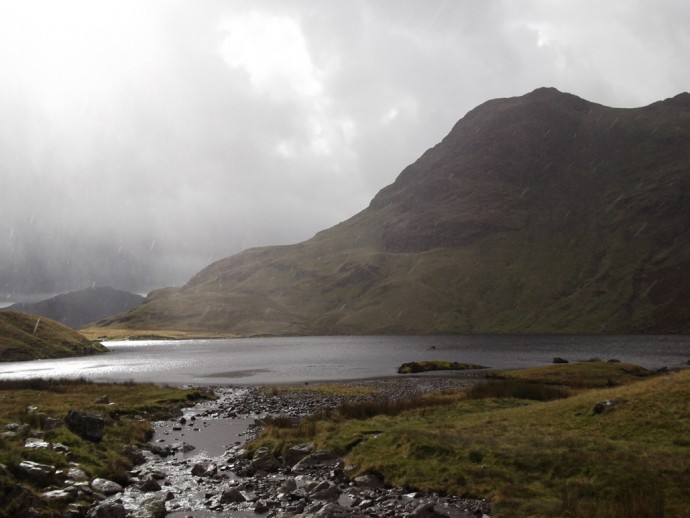 ...and Harrison Stickle again through another shower

You quickly leave the rocks and solid paths behind to head up towards Sergeant Man – there’s a very muddy tread of sorts alongside Bright Beck but it was rather easier just to hack straight up the grassy hillside. Although the summits themselves are little oases of firm ground and rock, the typical moorland tramp over the intermediary tops and across the plateau to High Raise is dullish marshy going. The Raise itself is a very broad and nondescript hill, probably a desperate affair with the cloud down, but in breaking sunshine it has amazing views west and north. 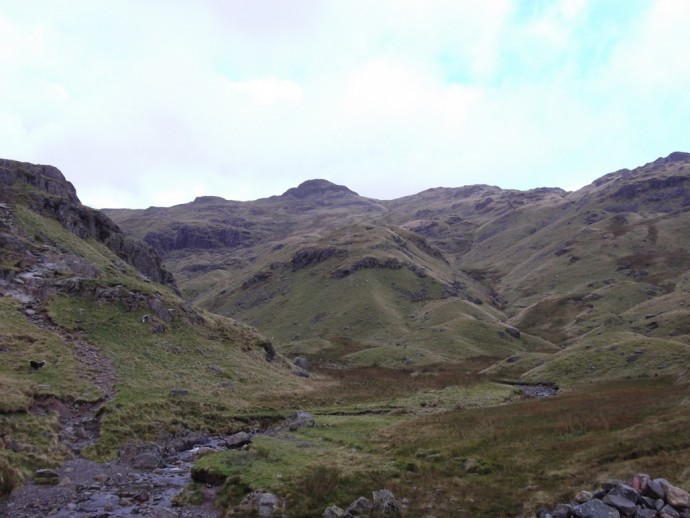 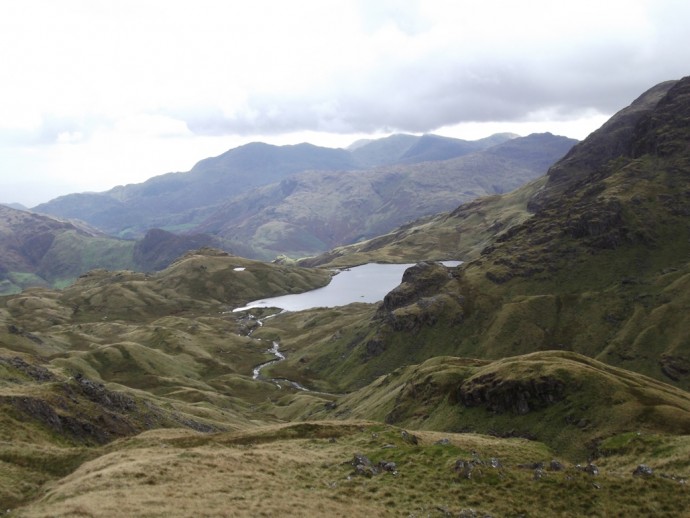 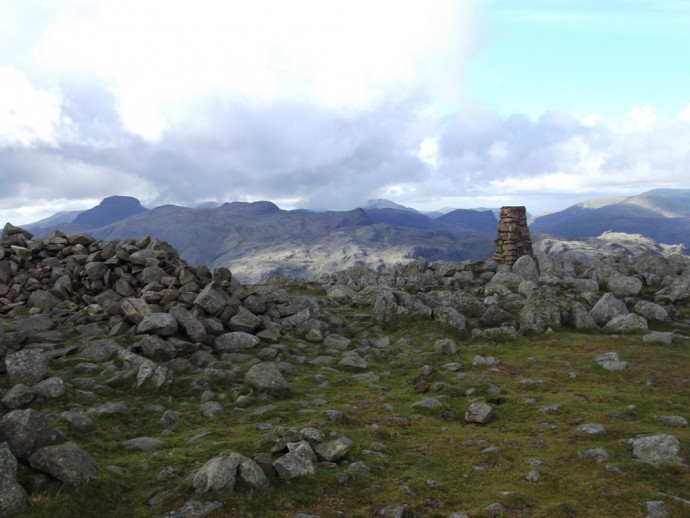 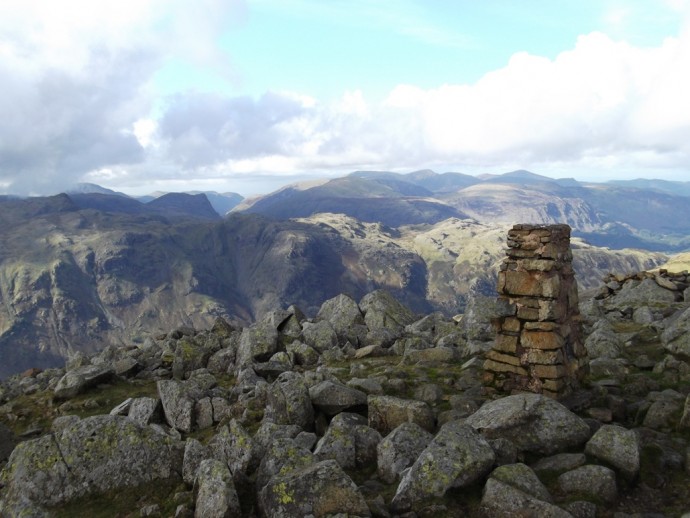 After a good start, it’s more damp and painstaking going around reedy pools and stony lumps back to Pavey Ark (climbed the cheat’s way, up a mere few feet of rock) and then contouring round to the highway up to Harrison Stickle – the latter path surprisingly rough and unclear going so close to so many popular paths. You’re then onto the main Langdale Pikes way though, and the rest of the route is terrific from the ascent to the bulbous peak of Harrison Stickle onward. 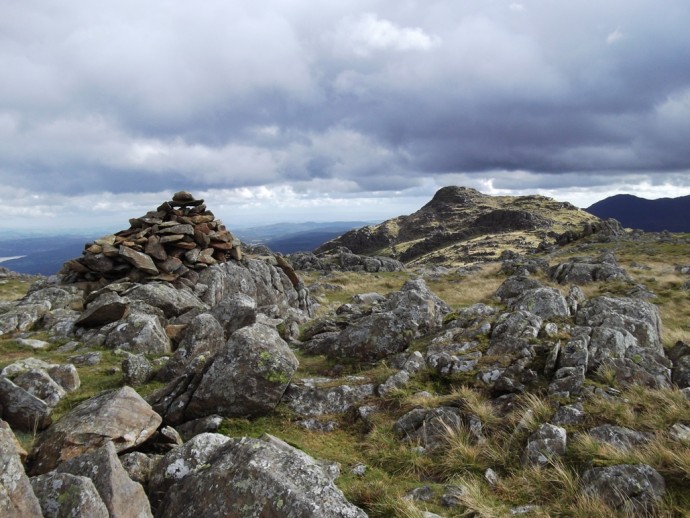 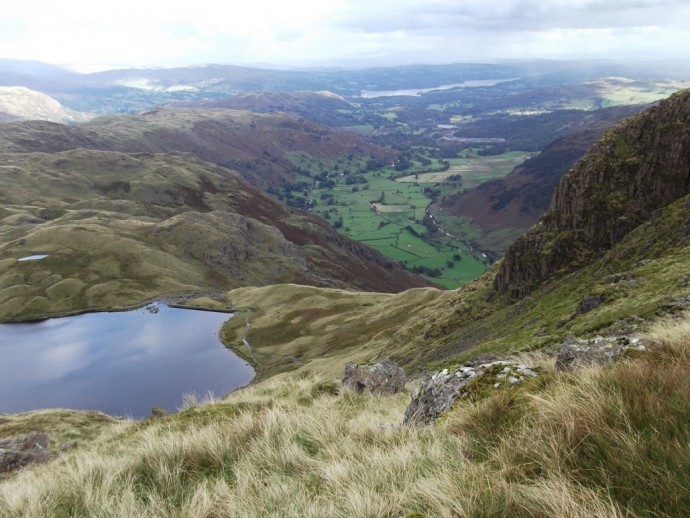 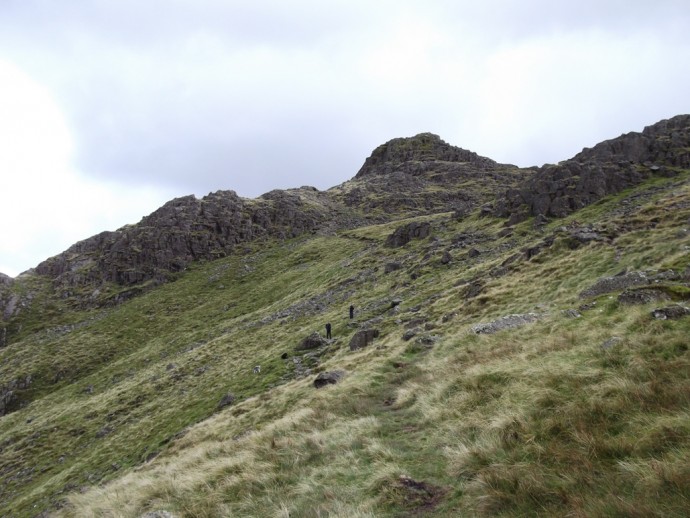 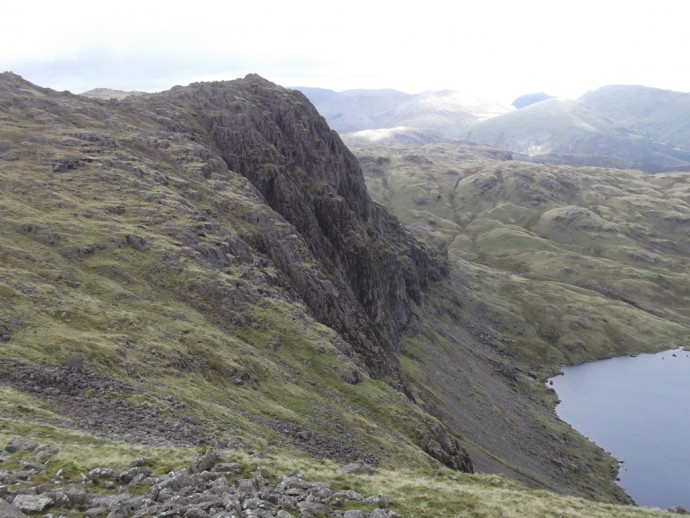 Back to Pavey Ark 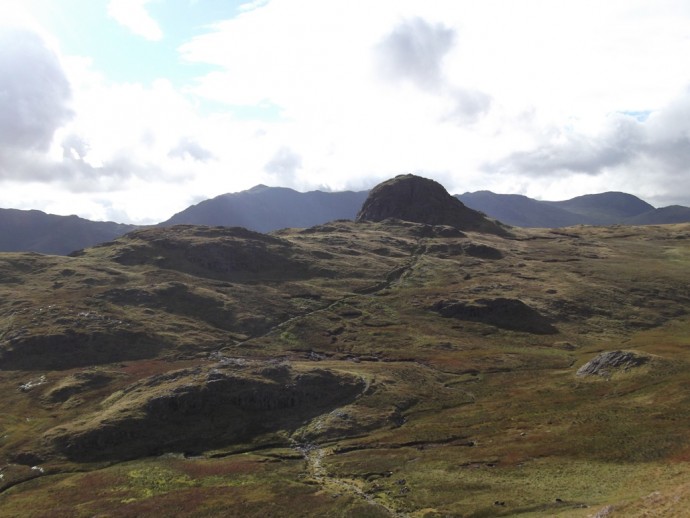 The route to Pike o' Stickle

Across the head of Dungeon Ghyll, a stepped path gets you halfway up Pike o’ Stickle before you can choose your own scrambling route to and from the summit – fun, unexposed stuff, the routes seem to get shorter but tougher the longer you stay on the path. Stunning views south from the summit… 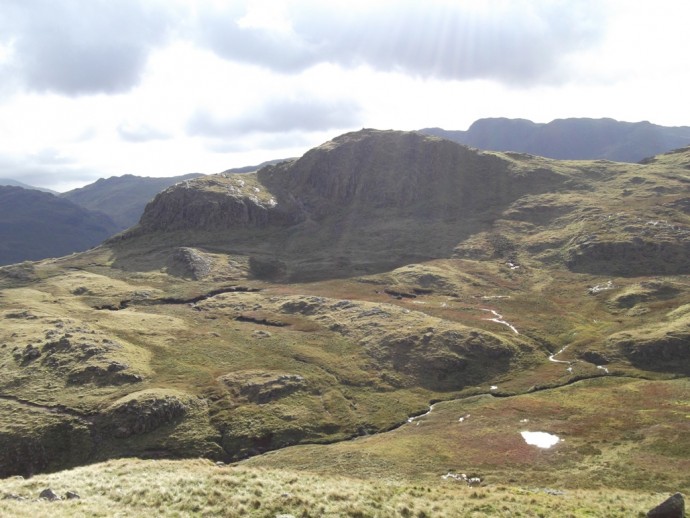 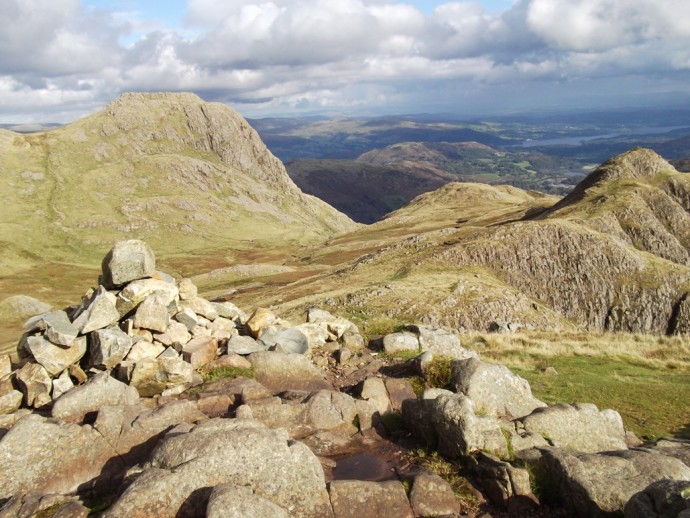 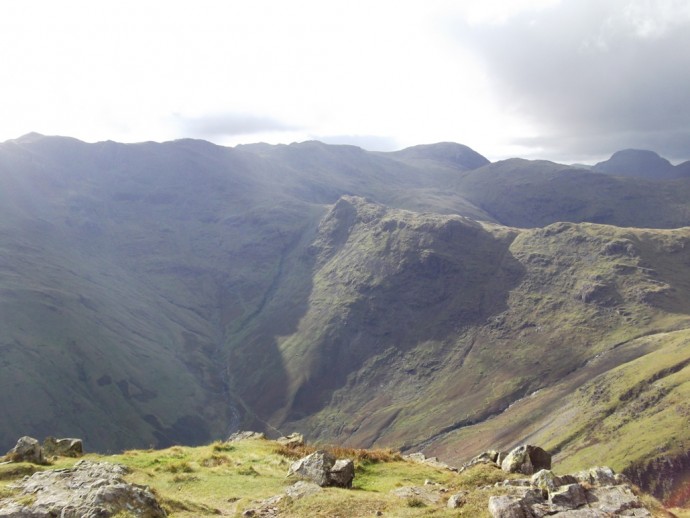 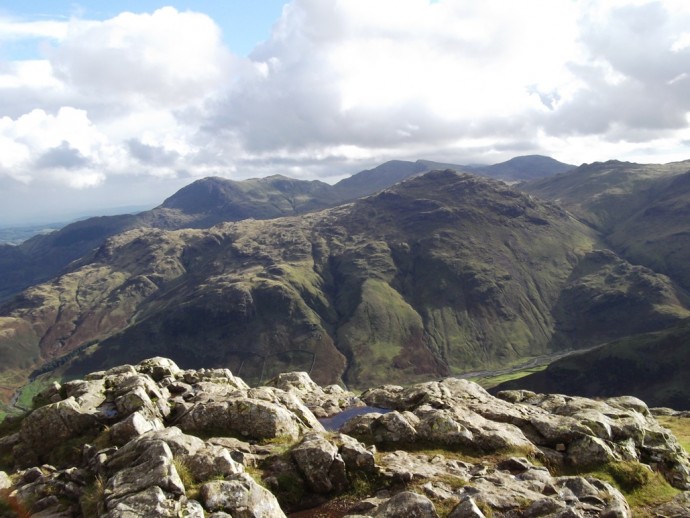 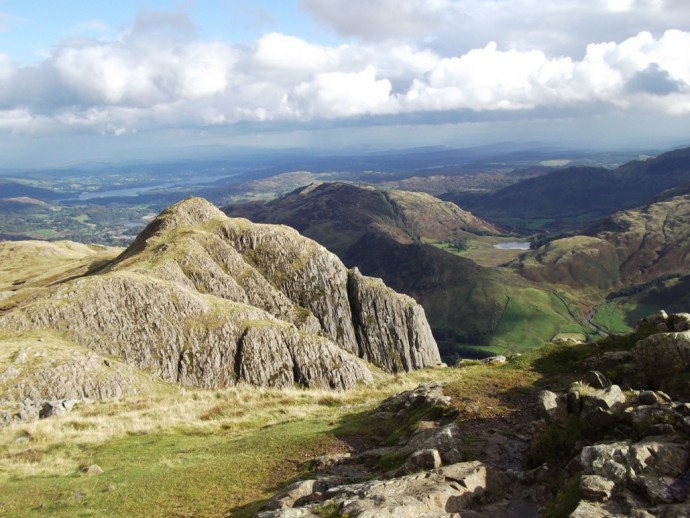 Down again and on the easy ridge to Loft Crag, the skies opened again and – for the first time this year – there was a definite tinge of white and a cold sting in there, even with sunshine and a striking rainbow bathing the slopes yards away. Plenty of work done on the path back to Langdale from here and you could never mistake the way, even if the amount of sloping stone embedded makes it quite treacherous going in the wet. A wonderful set of peaks, and probably very lucky to catch the views on a day when almost no-one else seemed to. 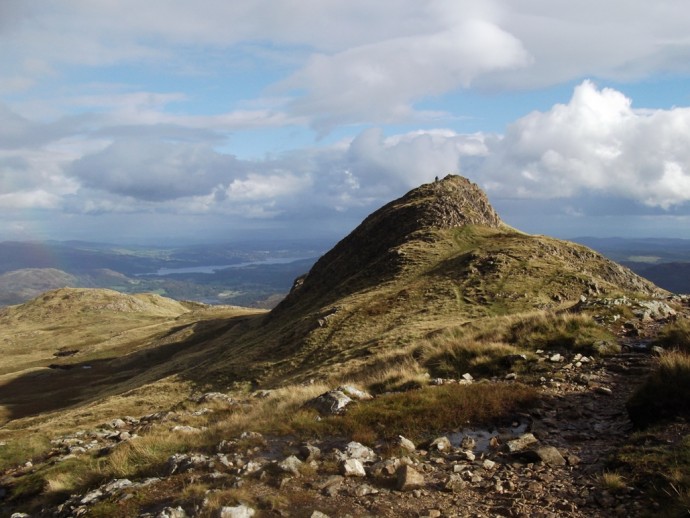 On the ridge to Loft Crag 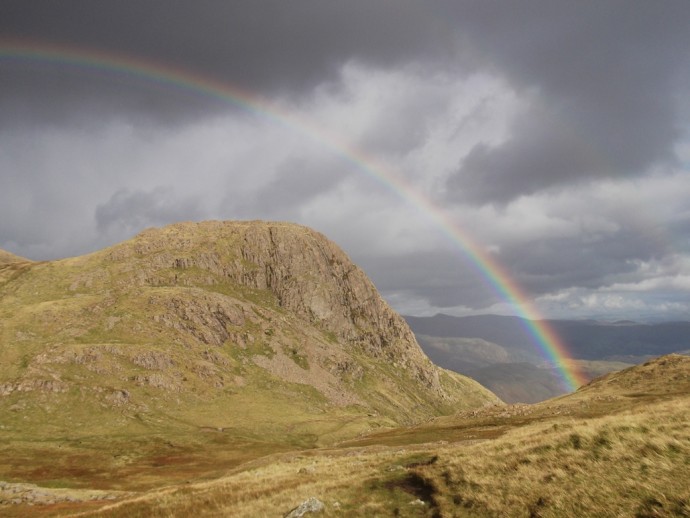 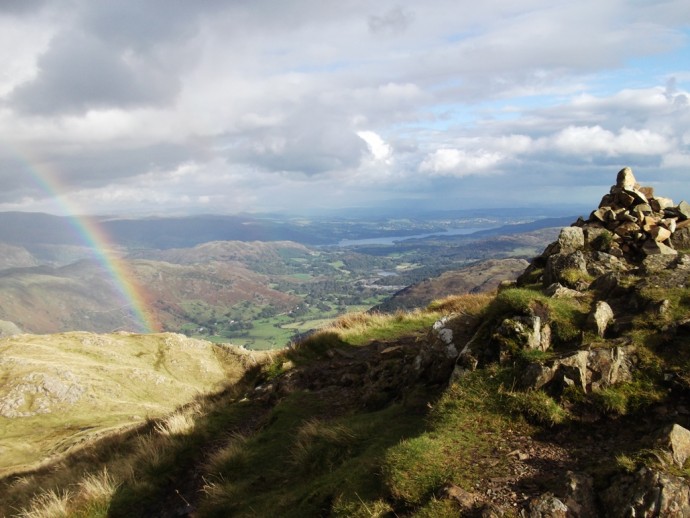 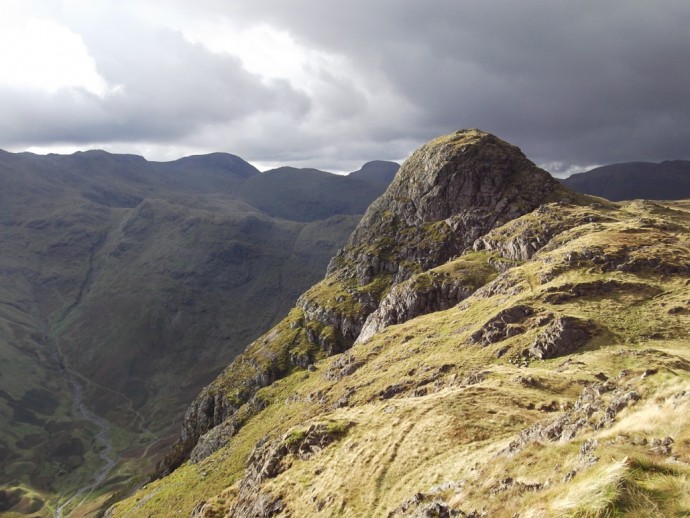 I've always thought the Langdale Pikes are halfway to perfection. If they dropped off to the NW the way they do down to Langdale they'd be just about the best thing in the Lakes. My memory of the Langdale Pikes was my dodgy knee going off on they way up to Stickle Tarn. Subsequently it was fine while going uphill and agony going downwards

I battled on and bagged all the pikes but the descent was bloody horrible. Taught me not to forget my Knee bandage.

You've made me slightly nervous with mention of the weather...I'm heading up that way in a couple of weeks for a 2 day/2 nights walk with an overnight wild camp - and muggins here thought he'd be cocky and agree to bivvy under a tarp.

Time to dig out my sexy long johns

Good walk report mind and sounds like it was a good day out.

This is a real beauty P, incredible scenery, certainly some of the best in the lakes. I know what you mean about that winter chill in the air, been feeling that lately on the summits over here...time to get the winter woollies out

Great route, we did a shorter version, scrambling up Pavey Ark instead of going around but the views and scenery are amazing! Great photo's.

A good one, poppiesrara. These hills are some of my favourites. You got some good views and fine photos despite the mixed weather. Perhaps it was wise to leave Jack's Rake alone in wet conditions. In dry weather, it's not too bad and makes for an exhilarating climb.

Looks like a lovely walk and you got some really atmospheric snaps with the changeable weather. Will keep this on in mind - cheers

Great report Popp's and really enjoyed it - I love this area of the lakes and usually take the route up from Dungeon Ghyll and up Jack's Rake and then the wander around the peaks on the top in any order is usually thoroughly enjoyable. I am currently trying to talk the Willy walker into a Lakes trip and have thought about doing this area so will remind him to have a look - the photo's are brill as well - really do the trip justice.