Almost succeeded in doing all the Coniston hills in one day,apart from a slight problem on Dow Crag.

I started from the centre of Coniston.The car park would have been £7 for the day so I found a place to park on the road for nothing.
The first hill of the day, and the biggest climb, was Wetherlam.You take the road signposted for 'Coppermines Youth Hostel' and then the path goes off to the right just after a waterfall.From here there are two paths up to Wetherlam.Wainright's book recommends the path up Red Dell, which turned out to be like a river of mud, followed by a very steep slog up the hill. I don't know what the other path is like. It rained onand off all day, but there were enough good spells in between the showers to get some excellent views. My photos probably don't do it justice.
The second hill was Black Sails, a bump on the side of Wetherlam just big enough to be a Hewitt, and then it's a steep scrambly cimb up to Swirl How. Swirl How from Black Sails Top of Swirl How

Great Carrs is a short walk along the ridge.I probably went to Little Carrs as well because I wasn't sure which cairn was the summit. Swirl How from Great Carrs

Then it's a straight forward walk down and up to Grey Friar.I didn't get much of a view here because of the clouds. Then back down to the col, and there's a narrow path which contours round the side of Swirl How towards Brim Fell. From Brim Fell it's only a short walk to the highest point of the day, the Old Man of Coniston. 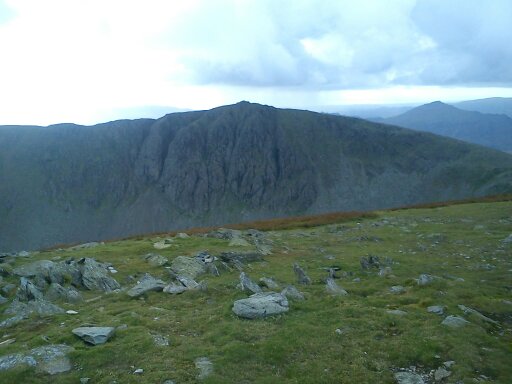 Dow Crag from the Old Man

Then it's along the ridge down to Goat's Hawse,and up the last climb of the day to Dow Crag.

At the top of Dow Crag you have to scramble up some rocks.I was a little apprehensive about this because it was misty and I didn't know how close I was to the edge of a 500 foot cliff.Anyway I climbed as high as I dared to.I'm not sure if I had my hands on the actual summit or if I was a few inches short of it.Either way I wasn't willing to climb any higher.

The rest of the walk was an uneventful descent over Brown Pike and down the walna Scar Road into Coniston. I don't know what the rules are about hill bagging. If you've done 99.9% of a hill is it ok to claim it, or would that be cheating?

oops I put one of the picturs in the wrong place

From my perspective, wherever you feel like stopping is the right place to stop for you. I don't think there are any rules for bagging, I guess you make your own. Some people are happy to stand on the top, for some actually touching the summit cairn or trig or both is required. The truth is there is nobody to cheat only yourself

the top of Dow Crag is like a rock bowl that a few people can sit in.

the top of Dow Crag is like a rock bowl that a few people can sit in.

Thanks.
I got to just below the edge of the bowl, but then it didn't seem like a good idea to climb into it. I might have gone up the wrong side of it or just been over-tired after a long day.Anyway I think the top of my head was probably higher than the summit so I'm going to mark it as climbed.I might go back one day and finish it properly.

Always love reading people's reports of those fells; done them many times