Showers and sunshine in upper Speyside

Showers and sunshine in upper Speyside

A little longer away from the hills than normal for me, but it was great to be back in Scotland again. I had considered various walking possibilities for my week off, and finally settled on this one for a midweek jaunt. While Newtonmore is a more useful railway station for these hills, very few trains stop there, so I decided to cycle the extra 3 miles from Kingussie to give me more flexibility. Not for me the boringly predictable approach of driving to the foot of my hill (actually I was going to do just that but my wife wouldn't let me have the car).

Upper Spey.gpx Open full screen  NB: Walkhighlands is not responsible for the accuracy of gpx files in users posts
I got off the train in bright sunshine and used the handy cycle path to Newtonmore. There was a refreshing nip in the air, which combined with the sunshine had me looking forward to some great winter days. Shortly after passing the climbers layby at Creag Dubh, the rain started, and proceeded to get heavier and heavier all the way to Laggan. 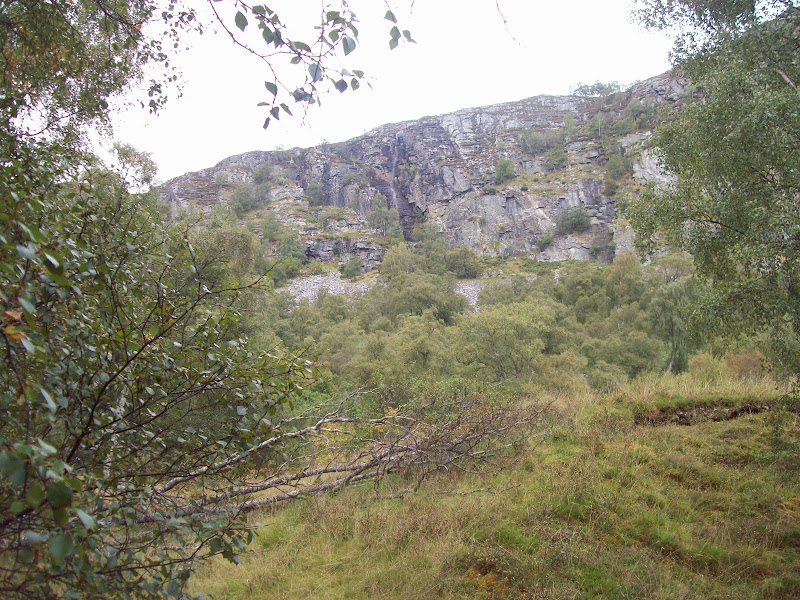 Luckily it was just a shower, and it eased off as I pedalled up towards the Spey Dam. By the time I had abandoned my bike at Sherrabeg, there were shafts of sunlight poking through the clouds again. 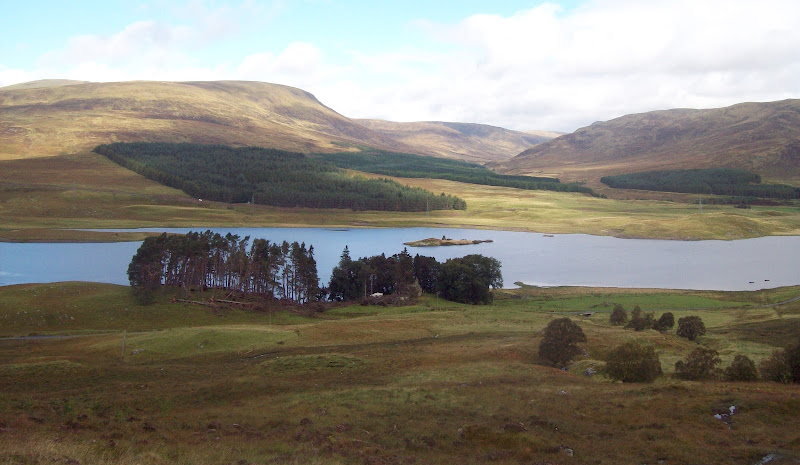 Above Sherrabeg, I had to climb a new deer gate which had a big padlock on, then follow a faint 4x4 track up to the edge of a plantation. Over another deer gate (also locked) and I was on the NE ridge of Creag Ruadh following a deer fence, with conifers to the left and the results of some more recent deciduous planting on the right. The going was a little wet and heathery in places but not too bad. The views across the glen to Geal Charn and Glen Markie were looking good, as was the line of the military road up the Corrieyairack Pass. It looked like my soaking on the cycle up had paid off, as I was now getting a nice interlude.

West up the upper Spey towards the Corrieyairack Pass: 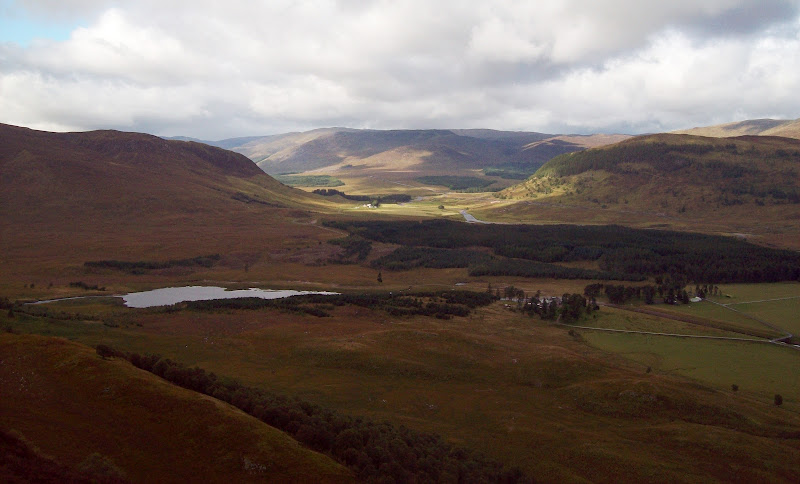 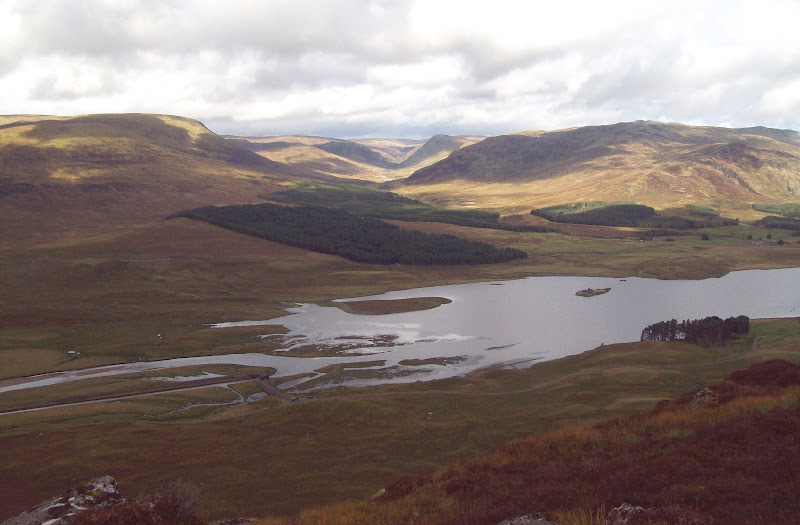 East to Beinn an Chrasgain and Creag Dubh: 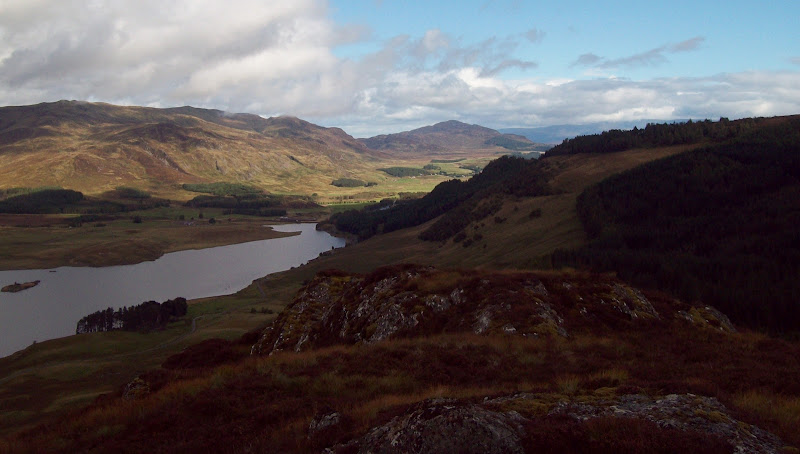 Once in the area of the summit plateau, the deer fence finally required climbing - I couldn't see any alternative. A few more minutes took me to the trig point and the view west. I had always wanted reasonable weather on this hill because of the view down Loch Laggan, and I pretty much got it

A reason to climb this hill: Loch Laggan and surroundings from the summit of Creag Ruadh: 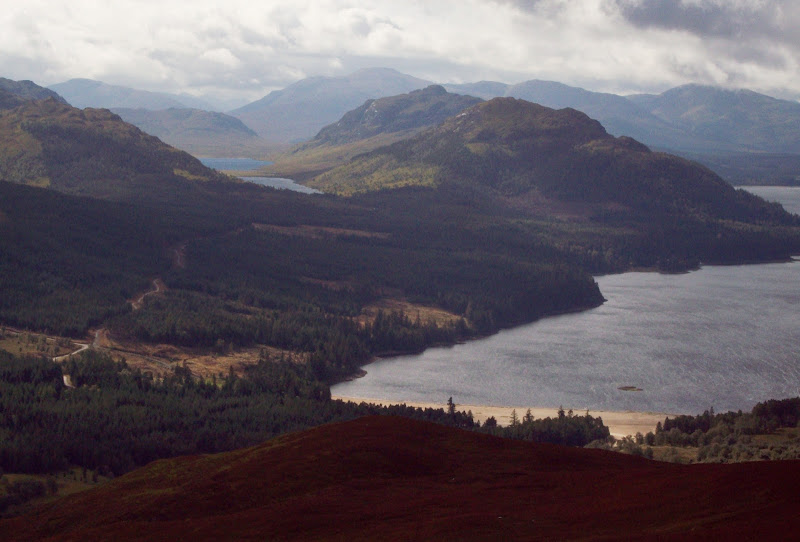 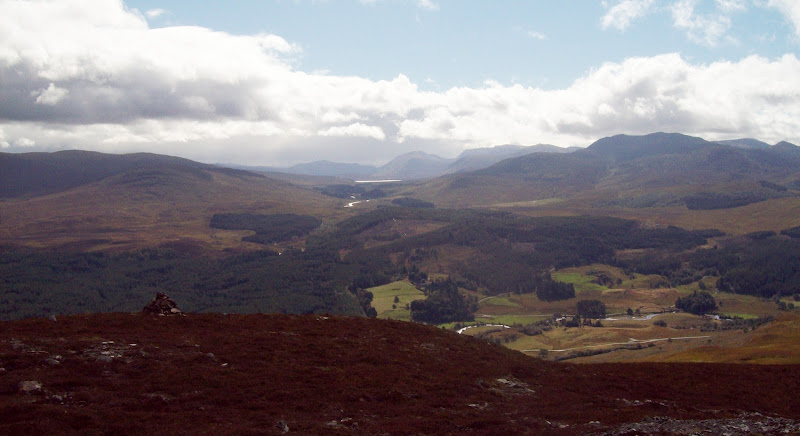 I stopped for lunch and had a good long look. Even though the Grey Corries and Aonachs were in the cloud, it was pretty impressive.Binnein Shuas and Binnein Shios looked particularly tantalising today - in fact they had been part of an alternative plan for today (I would have needed an earlier start to cycle to them though). The view down to Loch Pattack was also good, and Creag Mheagaidh even pulled itself out of the clouds eventually.

A new track over the moorlands from Dalwhinnie was prominent - obviously in place for the Beauly-Denny power line. This must be very recent - there was no sign of it in December, when I had crossed the hills either side of it. While I accept the need for construction access, I'd have rather seen the new power line follow the route of the existing one rather than carve a new line across the hills.

Meall Chuiach and Carn na Caim, with a new track for the Beauly-Denny line in the foreground: 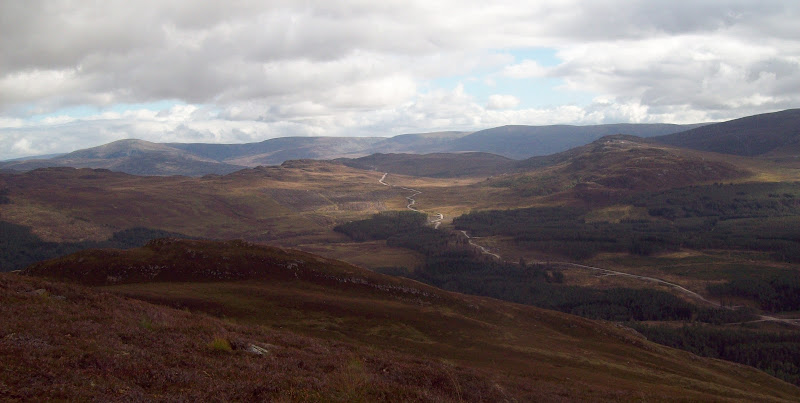 I could see more wet weather coming, so I decended NE directly to the conifer plantation before joining my outward route. Given a little more time and more settled weather, I might have tried to traverse to Black Craig and make a full circuit. However the going looked potentially rough and I knew I'd seen the best views from the main summit. 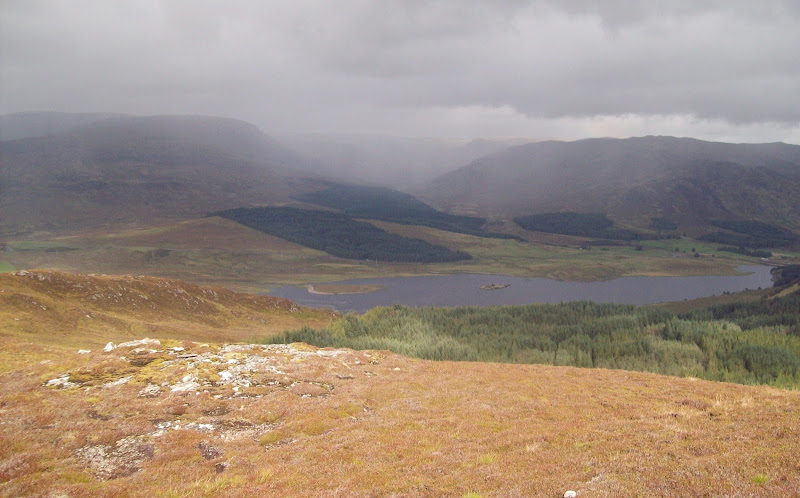 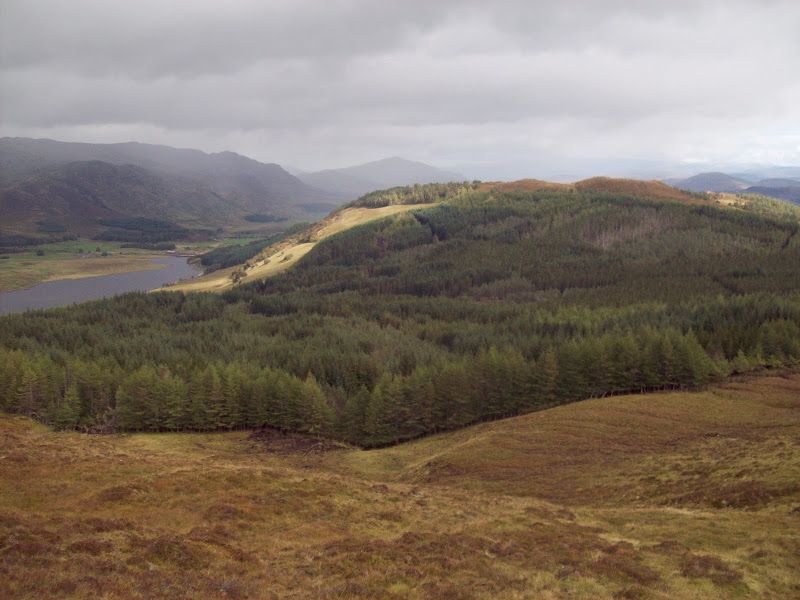 Back on the bike, and I took a short cut to the A86 on a forestry track. This had also been resurfaced as part of the Beauly-Denny work, so was fast and easily rideable. The heavens opened again as I passed Drumgask and Catlodge, but as I was approaching Cruban Beag, the sun came out again.

Creag Dubh from near Catlodge: 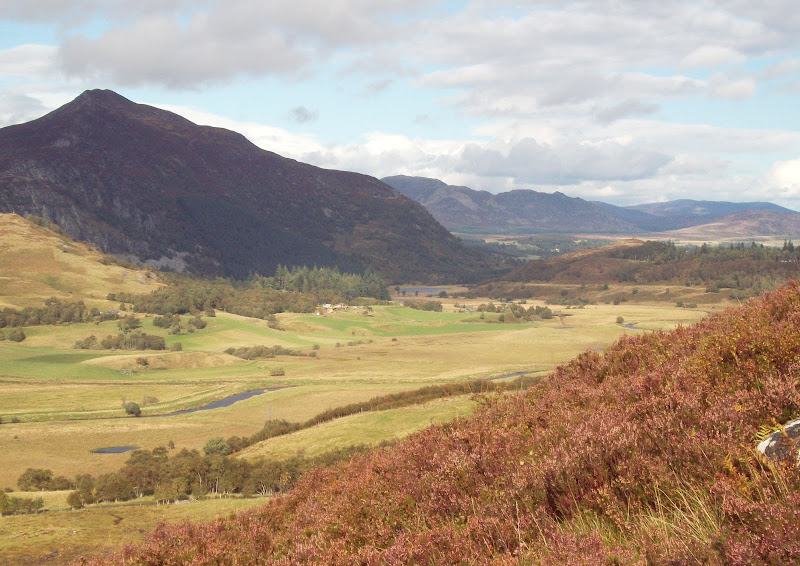 ...and up Strathspey to the Corrieyairack: 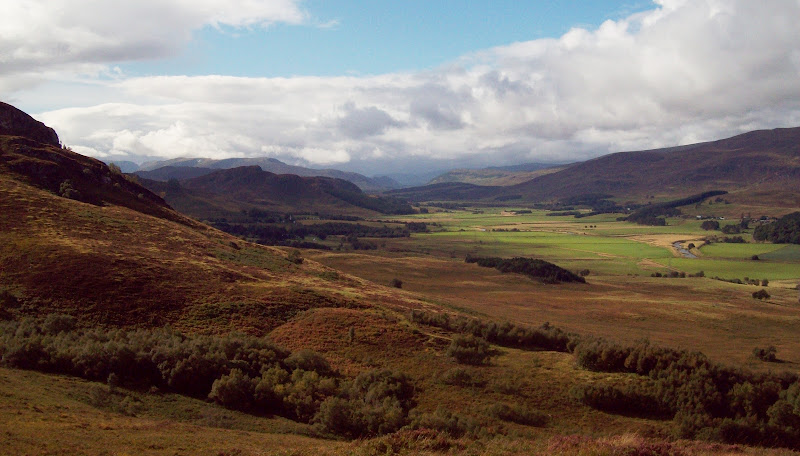 I left the bike next to the road bridge and ascended the track between Creag na Sanais and Cruban Beag. This petered out fairly rapidly, so I crossed the burn and pulled up heathery slopes of the NW shoulder next to a barbed wire fence. I climbed over this just before it changed to a full height deer fence and followed that most of the way to the summit. Looking at other reports, this would appear to be a less interesting route than the one from the Falls of Truim, but much easier going. The fence branched away from the ridgeline near the top, leaving me to cross a false summit to the trig point.

Creag Dubh from the ascent of Cruban Beag: 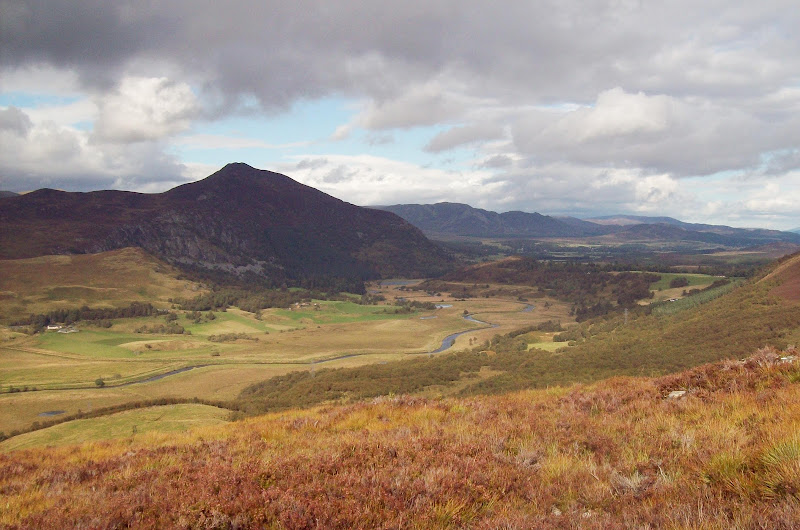 The views weren't quite as spectacular as those from Creag Ruadh, but this was clearly one of the great viewpoints of upper Speyside. While the high plateaus of the Drumochter and southern Monadliath Munros have their own charms, the most interesting and varied landscape in this region is in the valleys and on the lower hills. Meall Chuaich looked almost spectacular (for a change) and it was fun tracing the sinuous curves of the A9 down to the Drumochter Pass. 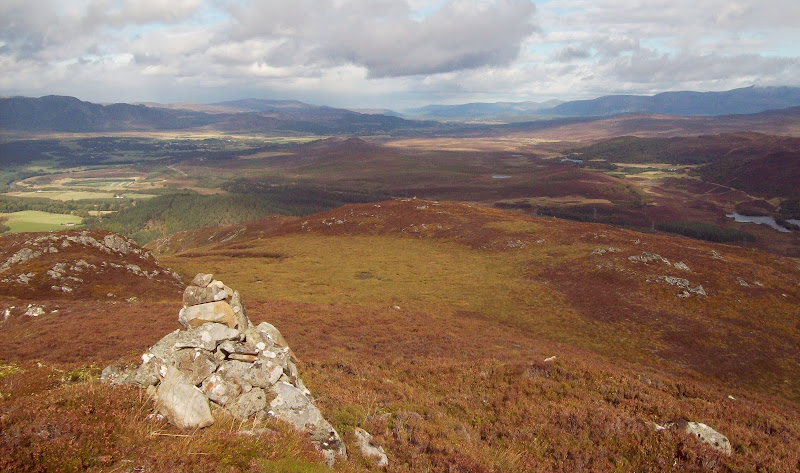 Creag Dubh and Strathspey from the summit: 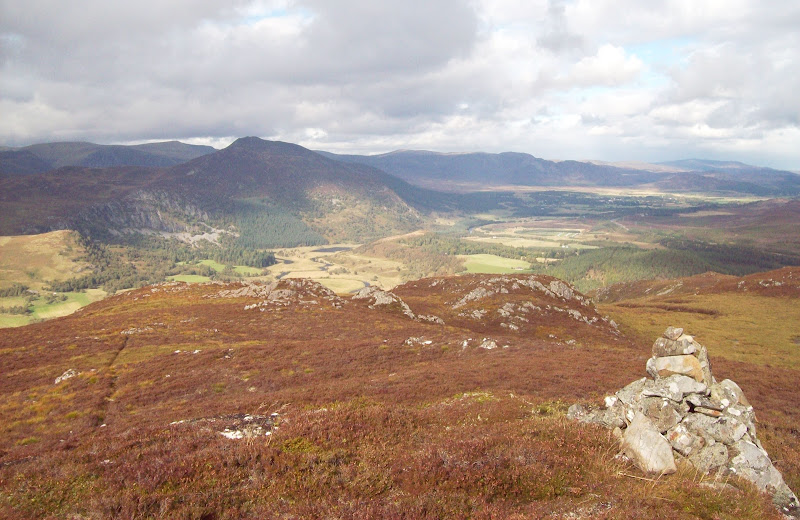 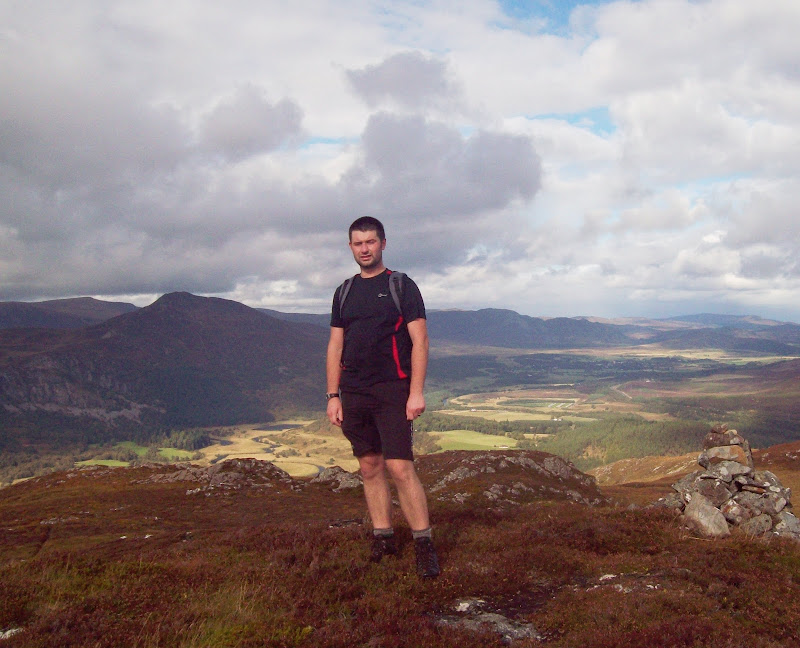 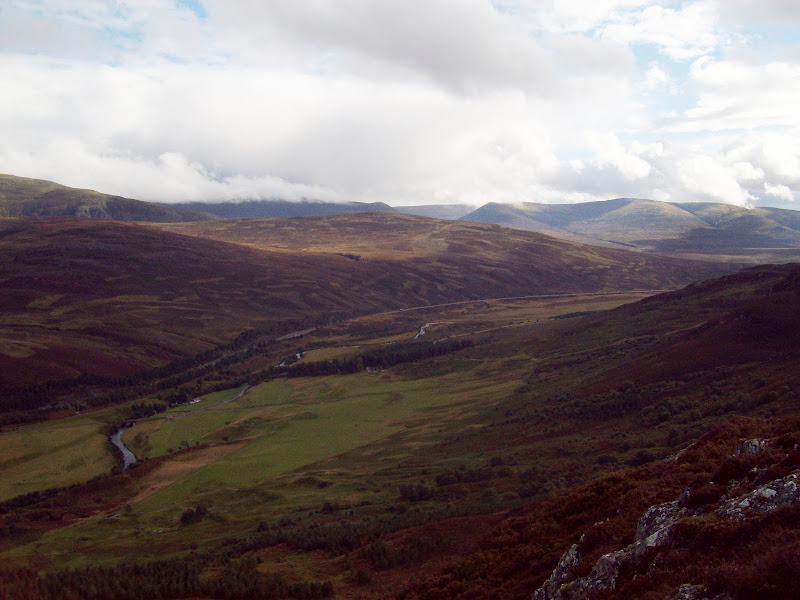 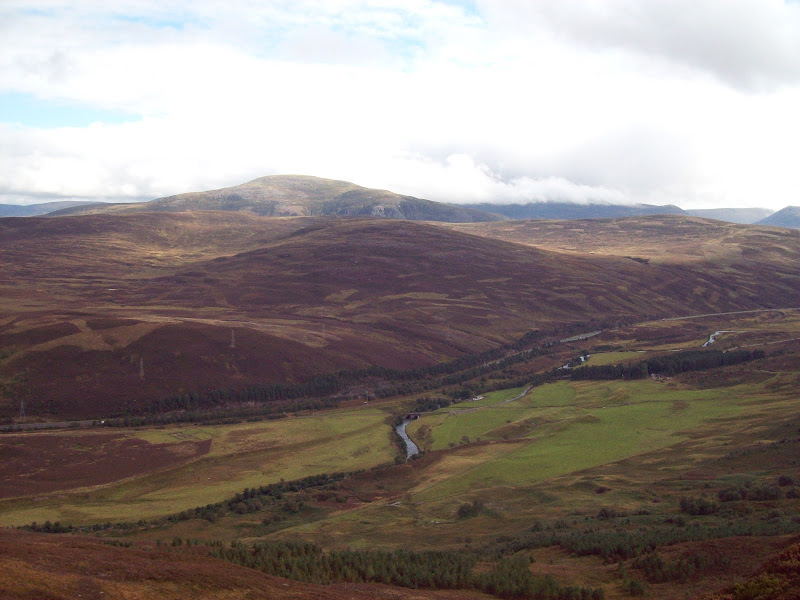 I had a second lunch here, but more showers were on the way, so I retreated by the same route. I'm pretty sure there is the potential for a decent circular route on this hill. 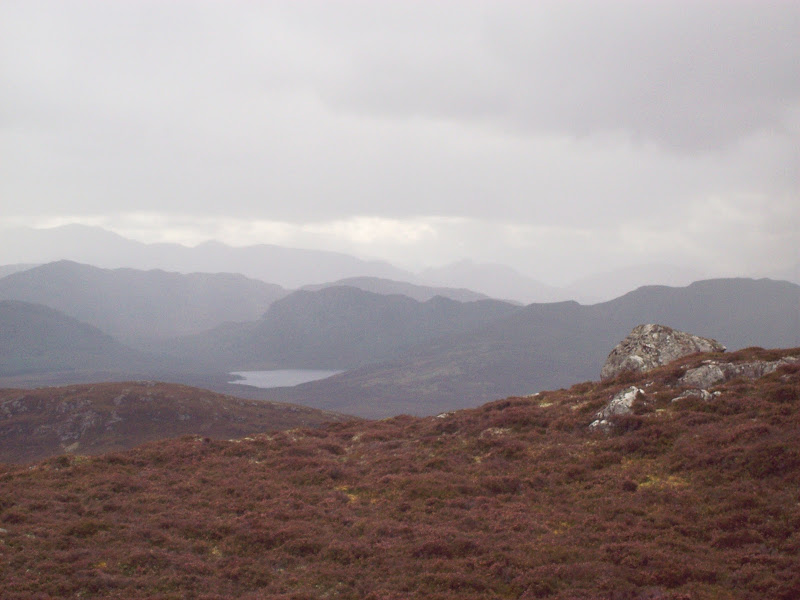 South to Dalwhinnie, Loch Ericht and the Drumochter hills: 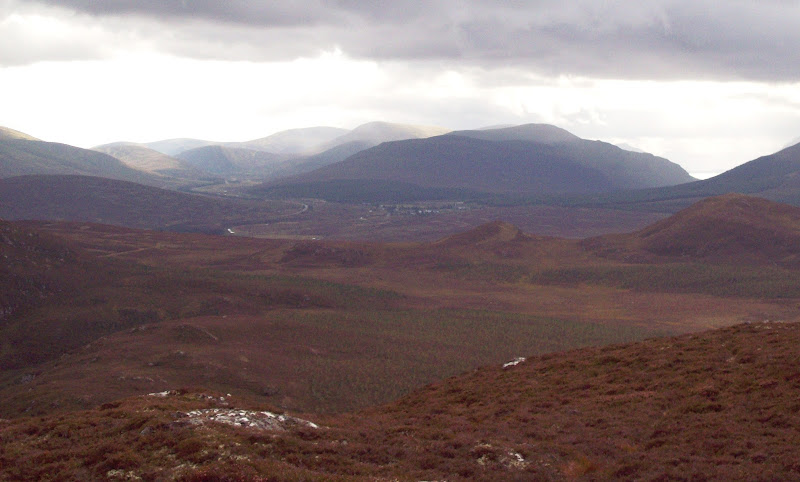 Carn Dearg and the Monadhliath: 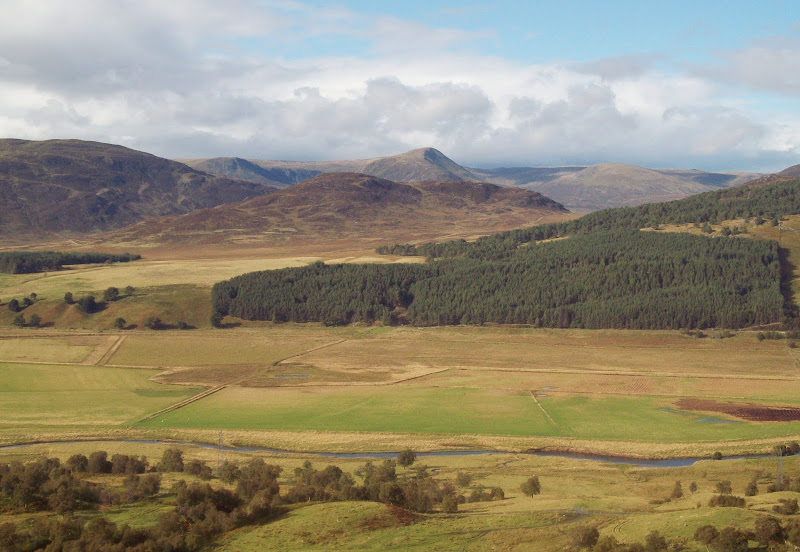 A day full of colour: 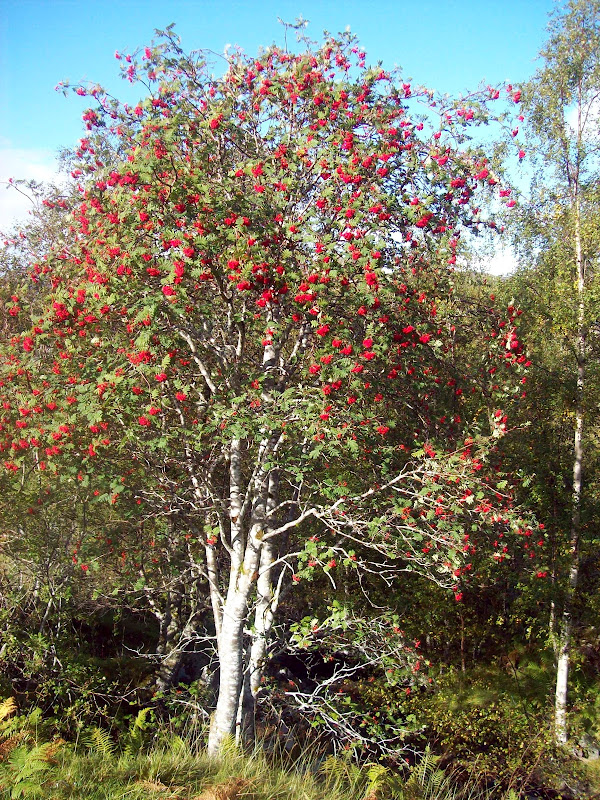 Heading back to the bike, Carn Dearg became increasingly prominent, while Creag Dubh didn't ever leave the limelight.

Creag Dubh from the descent: 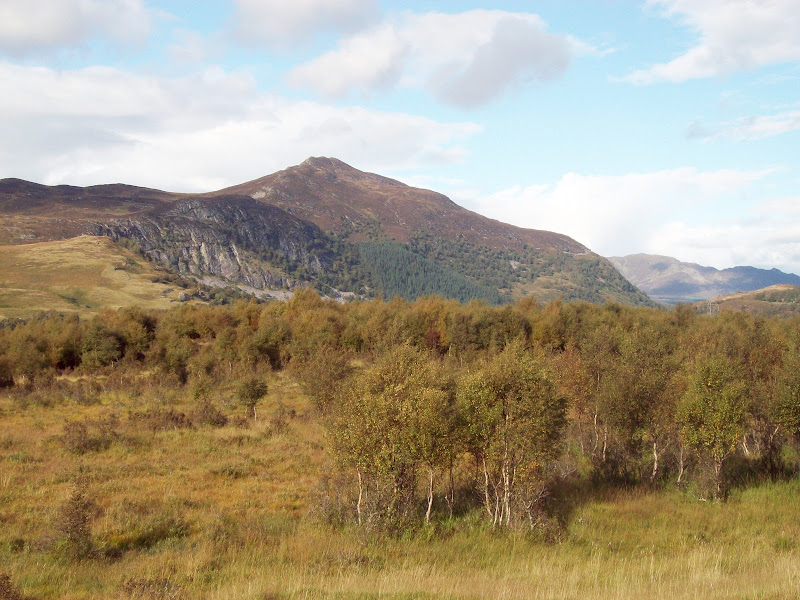 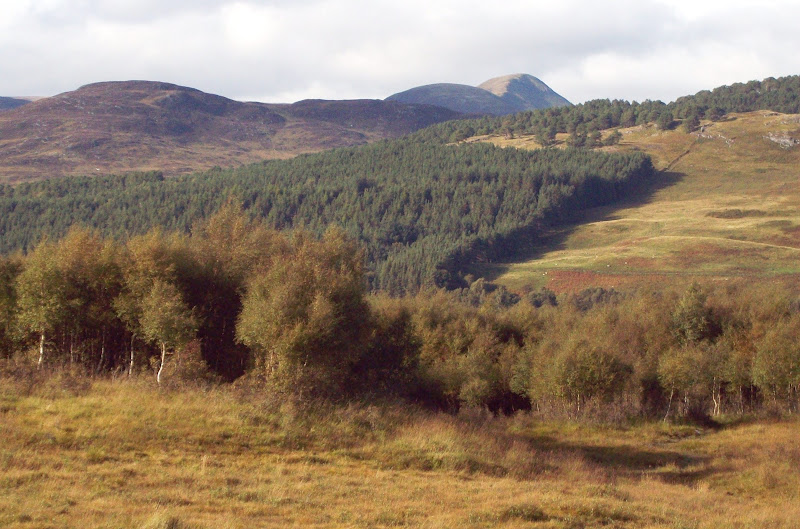 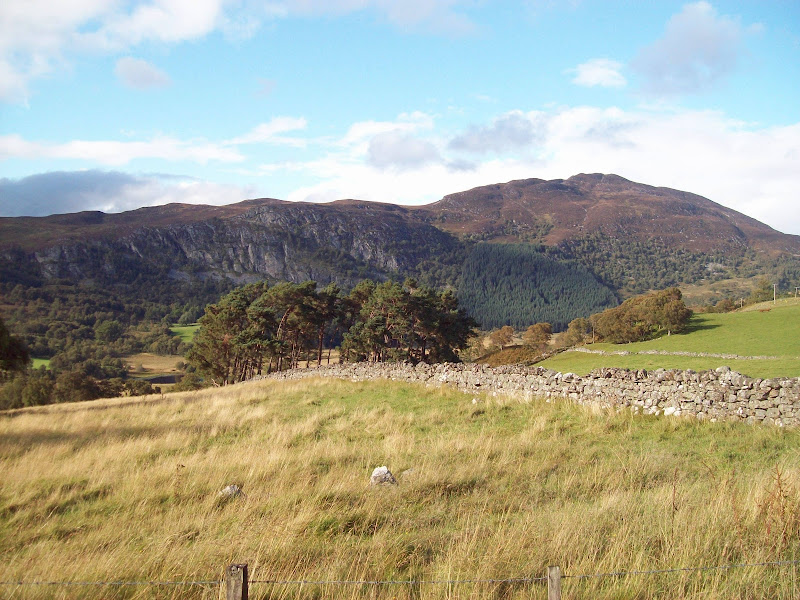 It was a pleasant cycle through woodland back to the A9, with good views across to the Creag Dubh cliffs. The cycle route along the old road was also nice, out of view of the A9 for the most part. I should have stopped to take some photos of A' Chailleach (which had caught some afternoon sunshine at this point), but I was about an hour ahead of time, and was caught with the notion of catching an earlier train. I wasn't sure what time the earlier train passed, but I knew it didn't stop at Newtonmore, so I charged off to Kingussie. Once there, I discovered that it had left about 25 minutes earlier - I had never had any chance of catching it. That left me an hour of sitting around in Kingussie - if it had been any longer, I would have added Creag Bheag to the day.

A great day for photography (even just point and click stuff like mine) and one that also had me looking forward to more cold weather (the novelty will soon wear off I'm sure)!

Another fine trek Malky, you are right about the photography, these are absolutely stunning. Your shot of Loch Laggan is a belter. I agree with you about the weather too, it's so much better hiking in cool temperatures...but the shorts will have to go for a few months

The train thing must have been frustrating, rushing to get back only to face a long wait

is that new tight fitting shorts your sporting Malky

What a lovely way to spend your day, inspiring stuff! Love the photo over Loch Lagan looking further over to Lochan na h-Earba