Ben Cruachan & Stob Diamh
Pictures by Jim, words by me.
About two and half years ago me & Jim were taken up the Cruachan ridge by his neighbour and had to descend before we could bag Stob Diamh. Nope, it wasn`t snow, wind or rain which brought on our early descent but the aforementioned neighbour`s wife ! He was on strict orders to get home early and we were left looking up at Stob Diamh with some regret, it was touching distance away.

We`ve always gone on about it, but had said it was a good excuse to go back. With the dark nights drawing in and the blue ballons filling up the southernly Munros, we decided to fill in the red ones furthest south and head back to Dalmally. After a couple of great days weatherwise and the threat of heavy rain and storms coming in we were lucky that there was one more day`s good weather left.

We arrived at the layby at The Falls of Cruachan station just before 10a.m The route up under the railway bridge and up the nobbly path through the trees and bracken takes me back to days of my youth, hiding from the cops with a bottle of wine or a few cans of beer bought by a stranger in the street

No seriously it`s great to emerge from the undergrowth and look back at Loch Awe or to see that great big dam appear in front of you.It feels just like your on an adventure into a hidden world.

We climbed over the stile, which leans back as you climb it, and onto the path on the other side towards the dam which becomes a bit boggy. 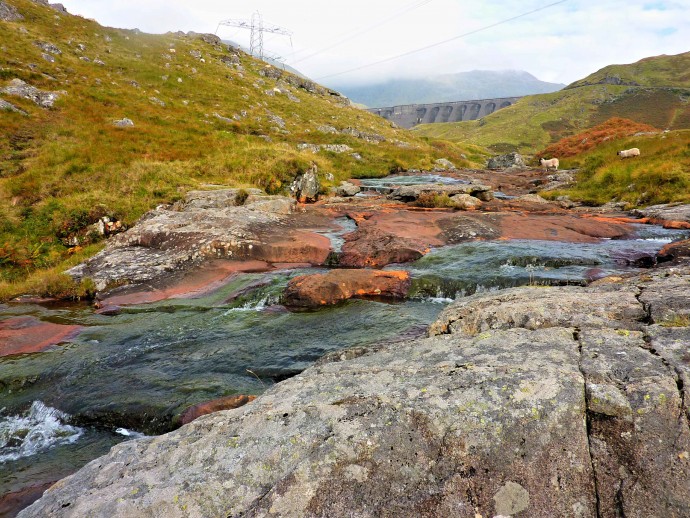 Beyond the dam, cloud covered the ridge that we would walk and we hoped that it would clear by the time we reached it. The last time we headed straight up onto the hill towards Meall Cunail, which was a long hard slog. So this time we followed the WalkHighlands route to the end of the reservoir and then up into the corrie Coire Dearg. This is a much more gentle walk along the water and by some waterfalls. 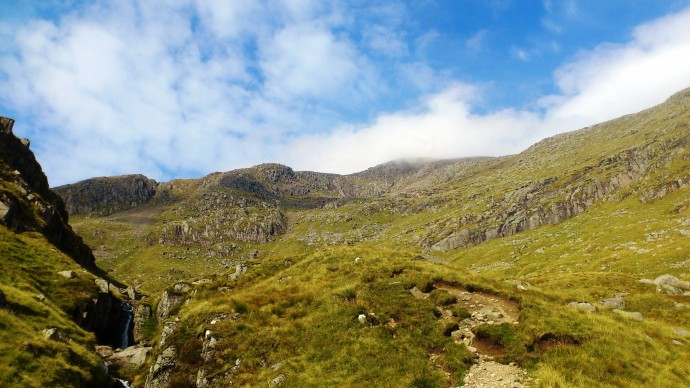 As we neared the top of this we spotted a gully off to our right which looked good for a scramble. 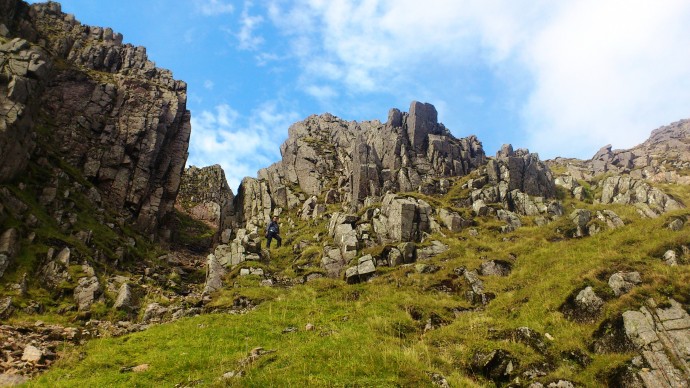 We picked our way up into it and the wind got stronger and practically blew us up through it.There were some dodgy moments as hand holds crumbled and some scree gave way under foot, I`m just glad the wind was blowing us up and not down ! 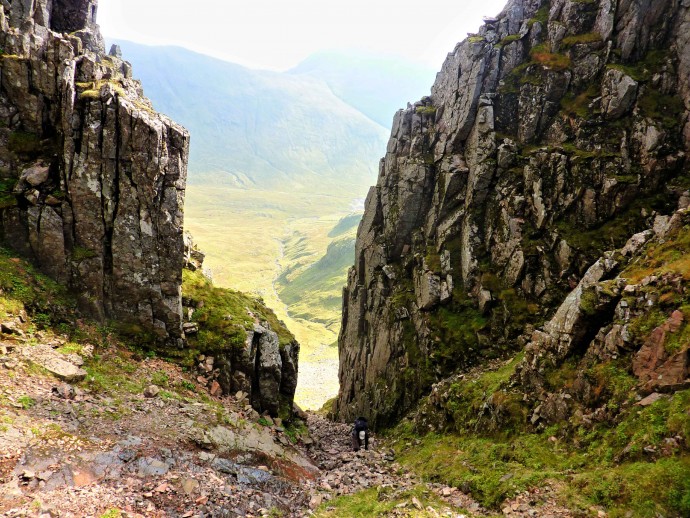 We remembered posing above the gully last time on a slab across the top and Jim went on to re-enact it. 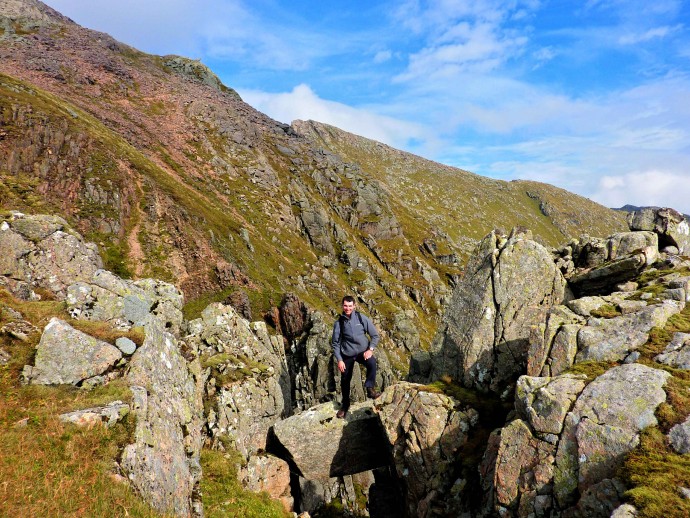 For me though, it was far too windy and I chickened out, been there, done that

We thought if the wind here is bad what`s it gonny be like at the top ? 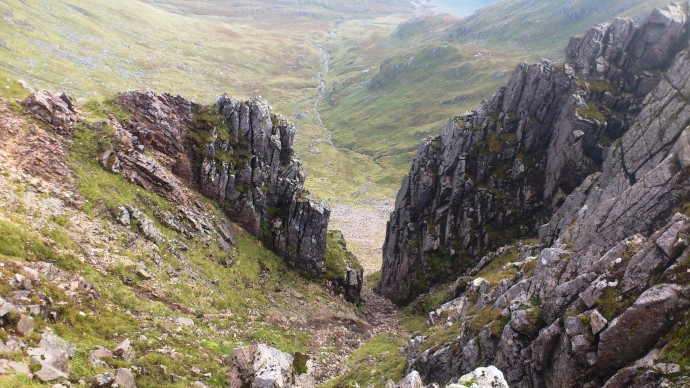 Looking down through the gully 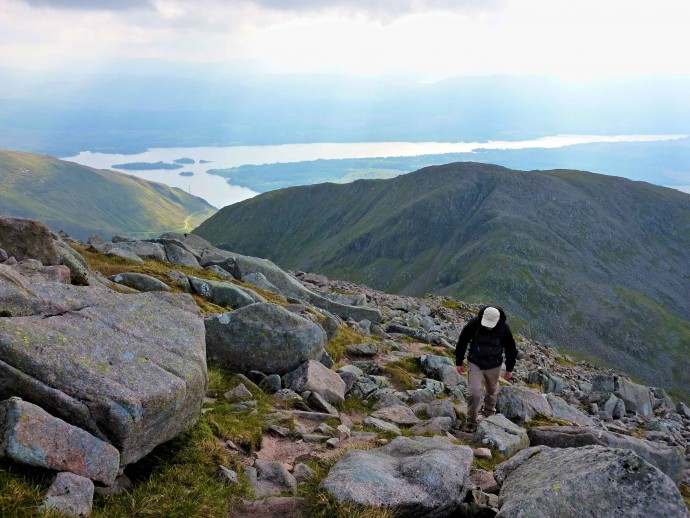 The wind had died down a bit by the time we reached the top, and we sat and chatted to woman who was sitting up there with her dog. Needless to say the dog barked and groweld at Jim like last time in Glencoe

Apparently she`d never done that to anyone before, it must just be you Jim ! As we chatted Jim gave me his camera and asked me to take a picture of him standing on a rock, but as he moved around it, dog running round my ankles, woman asking if we wanted our summit pic taken, Jim slipped, throwing his arms up in the air and disappeared behind the rocks. S#it ! For a split second I thought he was a goner, before he popped his head up again. I didn`t know if he was carrying on or not (just found out on tuesday that he wasn`t!). 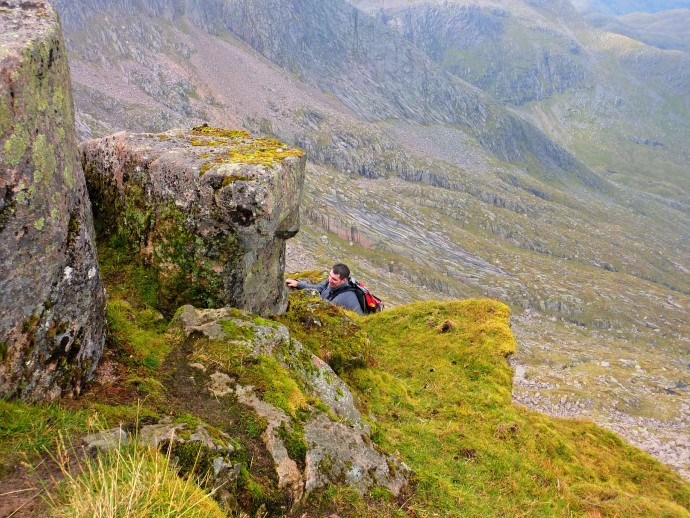 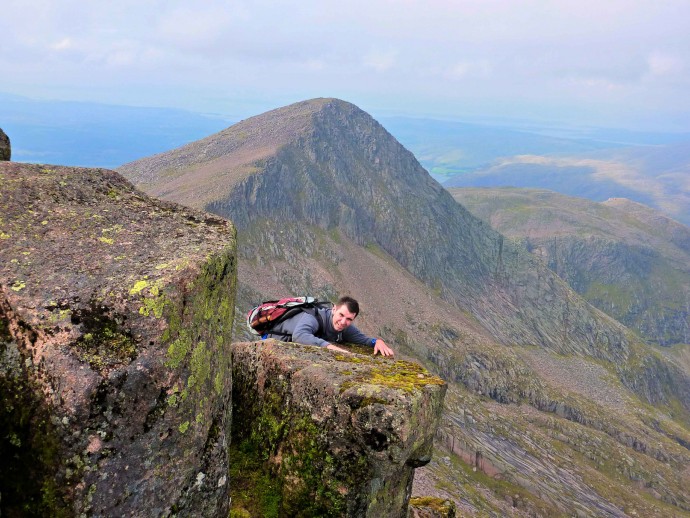 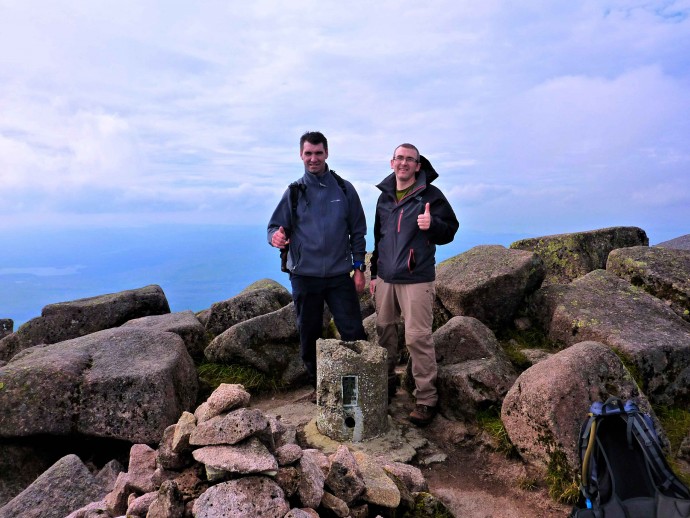 We soon headed along the ridge, down to the climb up the big slabs. 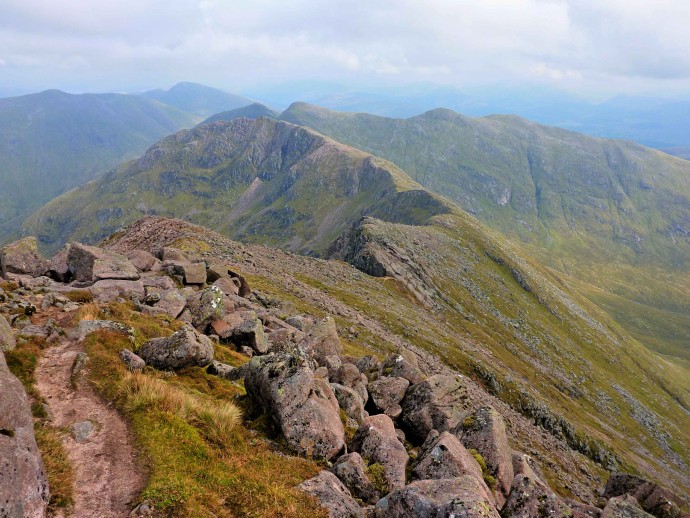 Our new friend wasn`t so keen on getting up there so we helped her up and reassured her that this was the most difficult part of the ridge before splitting off again. There were great views all around and the changing clouds allowed us to see different peaks in different lights, with Ben Nevis a shadow in the distance with a white cap on it. 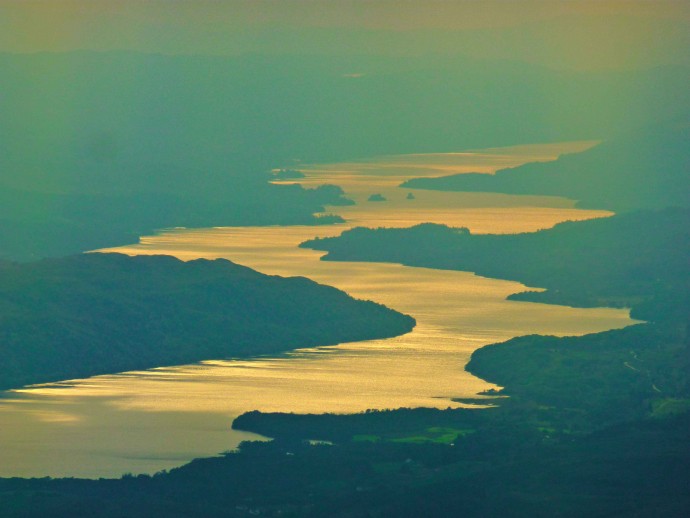 Eventually we got to the point where we descended last time out and laughed at how close the second summit was. We guessed at maximum half an hour up and although it is a steep path up we did it in 15 mins ! We even speculated that it would probably have been safer if not quicker just to complete the ridge last time. Anyway Stob Diamh became Munro no.38 for me. 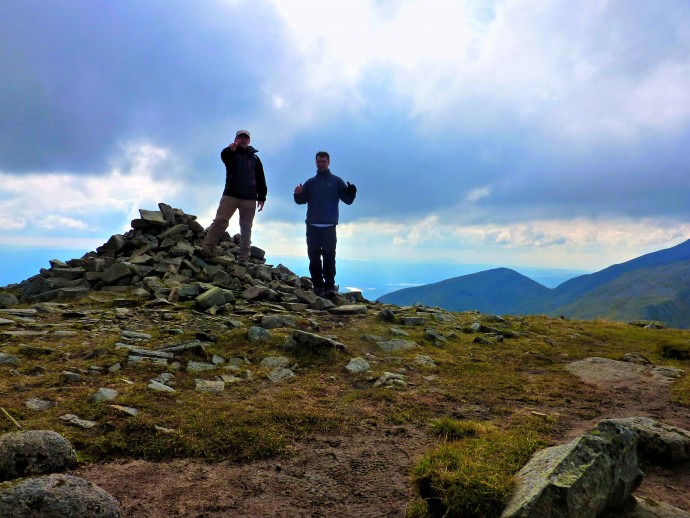 We finished the rest of ridge and down to the banks of the reservoir and back to car happy and content to get the monkey off our back. The legs were now getting a bit sore with the descent and the final part down through the trees was tricker than going up. 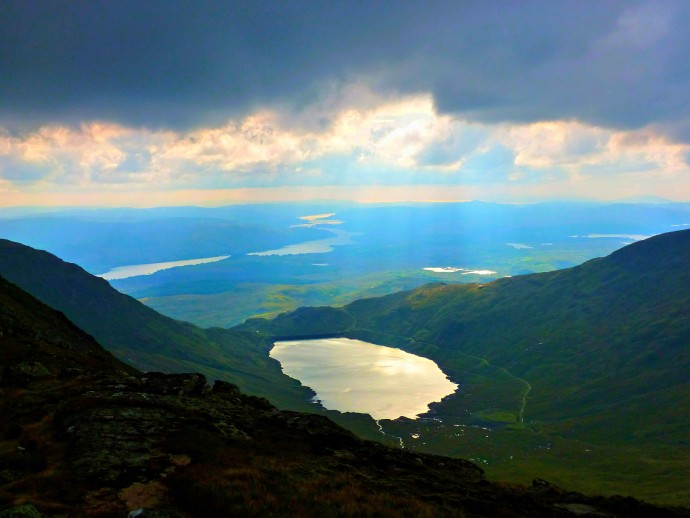 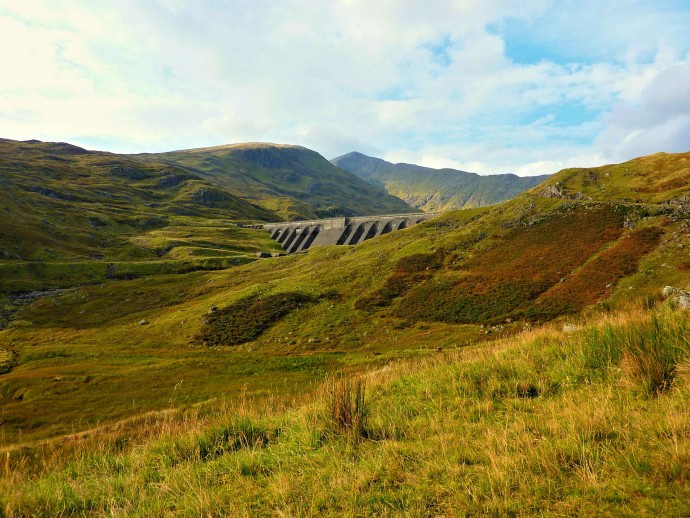 nice report tommy,could have said it was a massive vicious dog that chased me off the mountain,,ha ha.

Great report , enjoyed reading it and great that you finally managed to get back to complete the ridge. That gully looks great!! Guess I am glad that dogs usually like me...being chased by one off the mountain would not be my kind of fun

. I would not have been happy about that at all. Think of the inconvenience of trying to retrieve the car keys!!!!!

Great to see you out and about again Tommy

tomyboy73 wrote: For a plit second I thought he was a goner

Nice one Tommy,sorry I cudnae make this one,maybe next time mate.

A good round these two

I really must go back for a revisit one day. Am thinking a nice layer of snow might be nice

thanks for the comments everyone. Polly, I never even thought about that. Next time we leave the keys near the car !